The Jonas Brothers Came Home to Dallas, but Can’t Tell Anyone Because Diplo Hacked Their Instagram 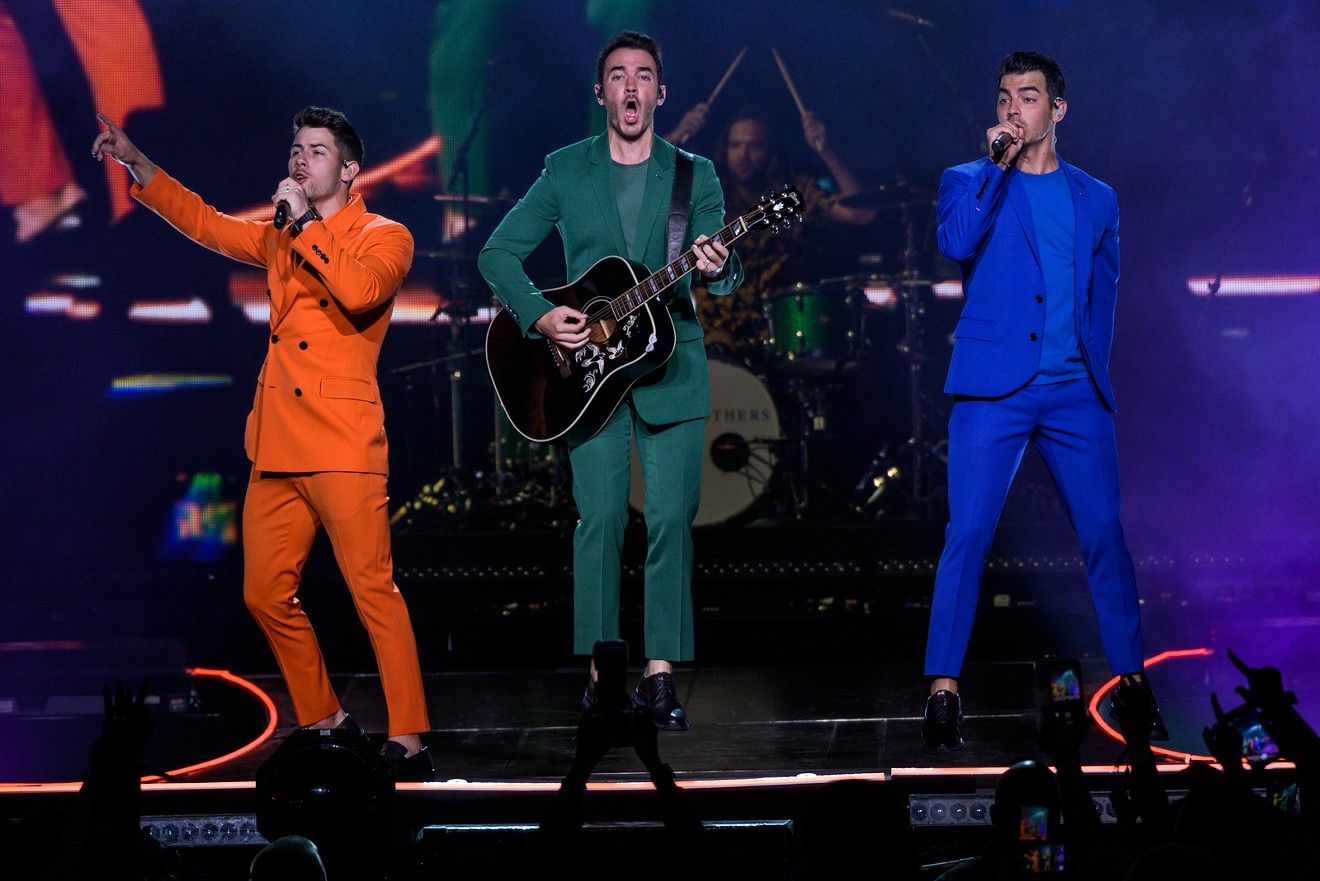 The Jonas Brothers came home to Dallas, but we almost missed it because of Diplo. Mike Brooks
The preshow energy was electric Wednesday night, as a packed American Airlines Center got ready to welcome back their favorite band of brothers. 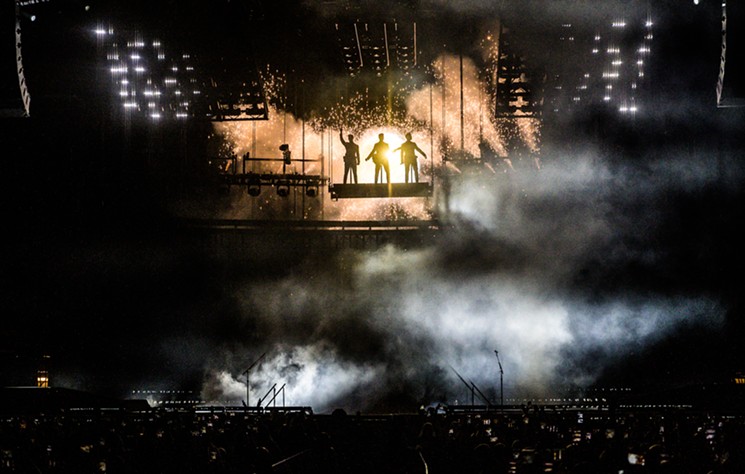 The songs from Camp Rock deserve the best stage production.
Mike Brooks
Maybe you could partially attribute the vibes to the openers, Olivia Somerlyn and Jordan McGraw. Somerlyn, subbing for the spot usually held by Bebe Rexha, is an old friend of the brothers and even attended four of their weddings, as we learned from People. McGraw is, you guessed it, or most likely you didn’t, the son of Phil McGraw. Yes, Dr. Phil. But though the opening duo is well-connected, they don’t quite deserve the credit for pumping up the crowd. McGraw was a little pitchy, and his overall performance was not impressive. There are some problems that not even Dr. Phil can fix.

The fans were dancing like nobody was watching even before a Jonas Brother stepped foot on the stage, perhaps because they’ve been waiting for this moment for years, with the excited anticipation of reuniting with old friends.

Some of the crowd has grown up, like the Jonases, gone through life's milestones, maybe found love, maybe had kids and had to get a babysitter for the show, or maybe even brought their kids to their first concert. Most of the attendees were clusters of women in their 20s, enjoying the best girls' night out. Just like 10 years ago, except their dads didn’t have to drive them, and now they can buy their own beer.

At 9:38 (perhaps an ungodly hour to start a concert if you have school or have to drive your kids to school the next morning), the lights dimmed. A video played, showing the familiar faces we know so well. Nick, Kevin and Joe Jonas. And then it began.

“It was fun when we were young and now we're older,” sang Joe, as the brothers descended from the ceiling on a platform flanked by fireworks. “We were up and down and barely made it over, but I'd go back and ride that roller coaster.”

“Rollercoaster” is a new song that has flown under most people’s radar and is not one of the brothers’ biggest hits. But its message was the perfect start to the night. After their first song, there was cheering. The brothers stood still, looking out in the crowd, beaming, while 30 seconds passed of unashamed, thundering cheers and screams.

The boys then played an oldie, “S.O.S.,” followed by a new song, “Cool.” They did well for themselves, bouncing between their old and new music, pleasing the crowd with the classics they'd come for, while getting them used to the new era of the brothers' career. According to our count, there were 16 old songs (some of which consisted of a couple of verses in a throwback medley) and nine new ones. And it was a golden ratio.

There was not much talking because, after all, it’s not like we had to get to know these boys. We watched them grow up.

“I don’t know if you know this, but this is kind of a hometown show for us,” said Nick during a rare pause from the music. “We were born in different places, but I happen to be born right here in Dallas. And we got a lot of love for Dallas.”

It’s not like we didn’t all know this. Earlier this year, following their surprise reunion as a band after a six-year hiatus, the Jonas Brothers released a documentary about their lives called Chasing Happiness. It had everything from family videos of them as babies in the hospital, singing as children, all the way to footage of their weddings and life with their partners and families.

Dallas even contributed to another plot point in the movie: the first time the brothers realized they were a national sensation. We told you about the documentary’s section about the Jonas Brothers’ 2007 show at the State Fair of Texas. More than 50,000 fans showed up when the band was only two years into its existence and still clueless about its impact.

Now, 12 years after that concert and epiphany, the Jonas Brothers are holding a toast halfway through their set. “Cheers, guys,” said Nick. “Thanks for having us back.”

Other notable moments included Nick belting out the beginning of the smash hit of his solo career, “Jealous,” and being joined by Joe for the song's ending. In turn, the two sang Joe’s hit from the band (called DNCE) he formed during the brothers’ hiatus, “Cake By the Ocean.” That DNCE song was a colorful, crazy dance party. It was very DNCE of them. Those blow-up dancing inflatables you see in front of car dealerships? They were everywhere. And there was lots of confetti.

In case you’re wondering, yes, they played songs from their Disney Channel movie Camp Rock. “Play My Music” made it into a medley, and there was a portion of the show on the B stage in which the boys took fan requests. It’s kind of suspicious that in every city, the second request they take is “Gotta Find You,” but it really is that necessary that they play it. It's essential Jonas.

By the end of the show, the energy in the arena only got better. The boys banged out two of their most beloved songs, “Lovebug” and “Year 3000,” and it was everything the audience could ask for. It wasn’t like they had to prove anything, but the boys made evident that they've only grown in their performance skills.

Amidst the roaring applause, Nick, Kevin and Joe ran offstage at the last note of “Year 3000” and the lights dimmed. But there was no fooling the fans. We all knew the concert wasn’t over, the Jonas Brothers were coming back. The Jonas Brothers will always come back.

They did, and their encore was, well, hot.

As Joe belted the first couple of words from “Burnin’ Up,” the boys popped back up onstage, at a moment perfectly timed with a burst of actual fire. You could actually feel the heat from the stage every time a new explosion of pyro-magic hit with the slam of a guitar chord. It was the best song they played all night.

The boys finished their encore with “Sucker,” a strange and anticlimactic choice, performed with all the house lights on. It was almost like they wanted to see every one of their fans, some of whom have followed them for 14 years, singing the song that brought them all back.

But the Jonas Brothers have not posted anything about the show on Instagram. Why? Because their account has been hacked by Diplo. The famous DJ changed the brothers’ profile picture and unfollowed everyone on their account except for himself. He then posted a photo of himself in his underwear and other nonsensical content. A few hours before the Dallas show, Diplo also posted memes about the brothers trying to figure out how he got the password to the account.

Early afternoon on Wednesday, Joe posted the words “@diplo chill fam” on his Instagram story, followed by a screenshot of him texting the DJ “Dude. Honestly it was funny for like a minute but who gave you the password?”

Who knows what will happen with all of that. But one thing’s for sure — if the brothers came back once, they’ll do it again. Even if we’re just talking about their Instagram account.
click to enlarge 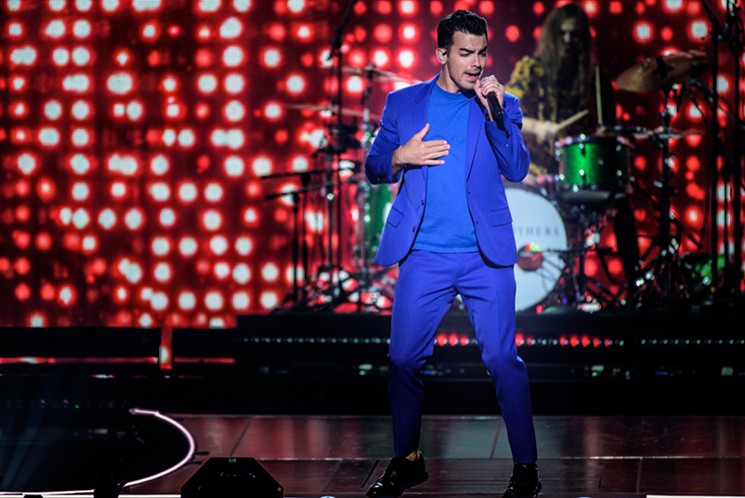 Back off. Joe Jonas is married.
Mike Brooks
click to enlarge 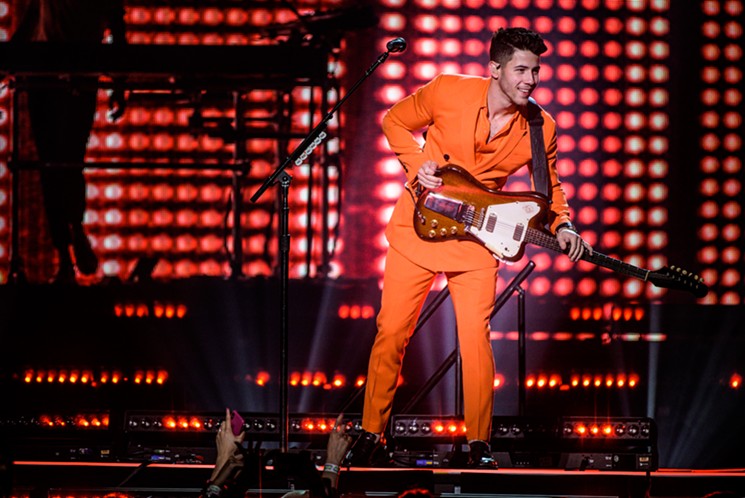 Nick Jonas is also married. They're all married. Ugh.
Mike Brooks
KEEP THE DALLAS OBSERVER FREE... Since we started the Dallas Observer, it has been defined as the free, independent voice of Dallas, and we'd like to keep it that way. With local media under siege, it's more important than ever for us to rally support behind funding our local journalism. You can help by participating in our "I Support" program, allowing us to keep offering readers access to our incisive coverage of local news, food and culture with no paywalls.
Make a one-time donation today for as little as $1.