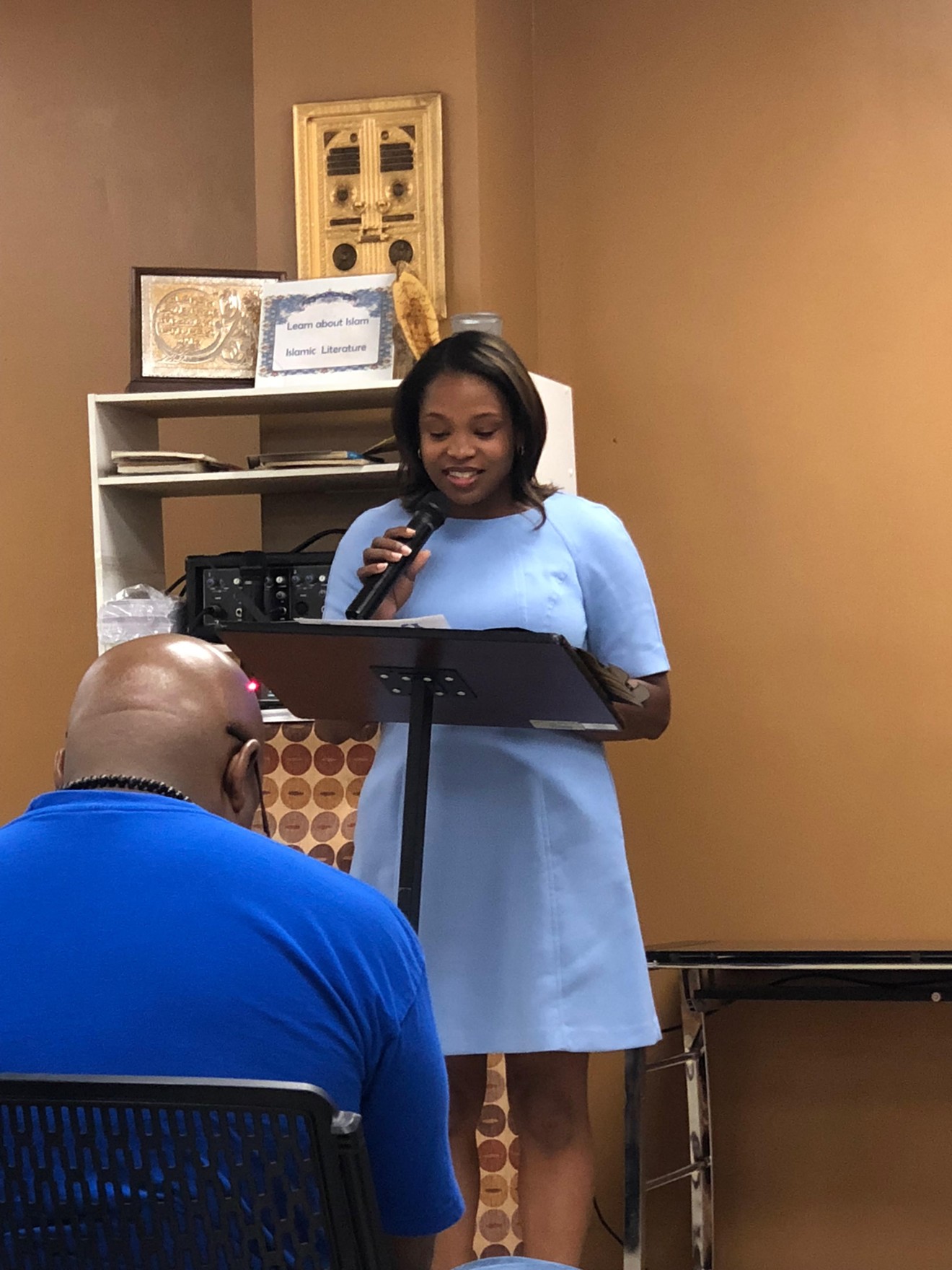 Councilwoman Candice Quarles of DeSoto proclaims Nov. 4 as W.D. Mohammad Day on behalf of DeSoto's mayor. Nashwa Bawab
The city of DeSoto declared Nov. 4 as Warith Deen Mohammad Day in honor of the late imam who led Muslim followers of the Nation of Islam into the orthodox mainstream after the death of his father, Elijah Muhammad, in 1975.

An event honoring W.D. Mohammad was held at the Beacon of Light Community Center on the grounds of the historic Masjid al-Islam mosque in Dallas on Sunday. DeSoto City Councilwoman Candice Quarles attended the event and presented the news to congregants of the mosque on behalf of DeSoto Mayor Curtistene Smith McCowan.

“I’ve learned so much about this prolific, progressive bridge builder for this community. I’m just in awe of all the good work that he has done but also just the message of doing good for goodness sake,” Quarles said to the crowd of Muslims on Sunday. “We are in a time in our communities, in politics and in this world where we need a little bit more of that.”

In her address to the congregants — consisting mostly of black Muslims — she talked about the mosque’s historic ties to the civil rights movement in Texas.

Masjid al-Islam was the first mosque to be built in Dallas in 1968 soon after the Jim Crow era and was originally called Mosque No. 48 under the Nation of Islam, a branch of the faith led by Elijah Muhammad and known for being home to civil rights leaders such as Malcolm X and Muhammad Ali. Many congregants of Masjid al-Islam who converted under the Nation of Islam still attend services and events at the mosque.

“He’s been a bridge builder of people of different cultures and races and religions.” – DeSoto Mayor Curtistene Smith McCowan


According to speakers at the event, when Elijah Muhammad, who had led the Nation of Islam since the 1930s, died, it was a confusing time for many of his followers about the future of their community until W.D. Mohammad picked up the mantle.

Mohammad was elected supreme minister of the group and eventually moved toward the Sunni tradition of Islam practiced by a majority of Muslims around the world.

He was the first Muslim to recite the invocation on the floor of the U.S. Senate in 1992 and was also the first Muslim to deliver an address in front of the Georgia General Assembly. He led prayers at President Bill Clinton’s inaugural interfaith prayer services. He was involved in prominent interfaith work in the U.S. and also met with Pope John Paul II in 1996 and 1999.

Mayor McCowan said the city works closely with members of the Muslim community in DeSoto and wanted a way to honor their work in the city.

“We did this to support the Muslim community and as a celebration of Mr. Mohammad's services and his contributions to the black Muslim community,” she said. “He’s been a bridge builder of people of different cultures and races and religions.”

“Since [W.D. Mohammad’s] passing, more people in the community are beginning to understand his story with the black Muslim community and, in turn, recognize us,” said Muhammad, connecting the dots between W.D. Mohammad’s history with that of black Muslims from the Dallas area. “Having this day is really significant because it shows the respect the city has for us, and it feels good to have our community be recognized for being here and the good we have done.”
KEEP THE DALLAS OBSERVER FREE... Since we started the Dallas Observer, it has been defined as the free, independent voice of Dallas, and we'd like to keep it that way. With local media under siege, it's more important than ever for us to rally support behind funding our local journalism. You can help by participating in our "I Support" program, allowing us to keep offering readers access to our incisive coverage of local news, food and culture with no paywalls.
Make a one-time donation today for as little as $1.