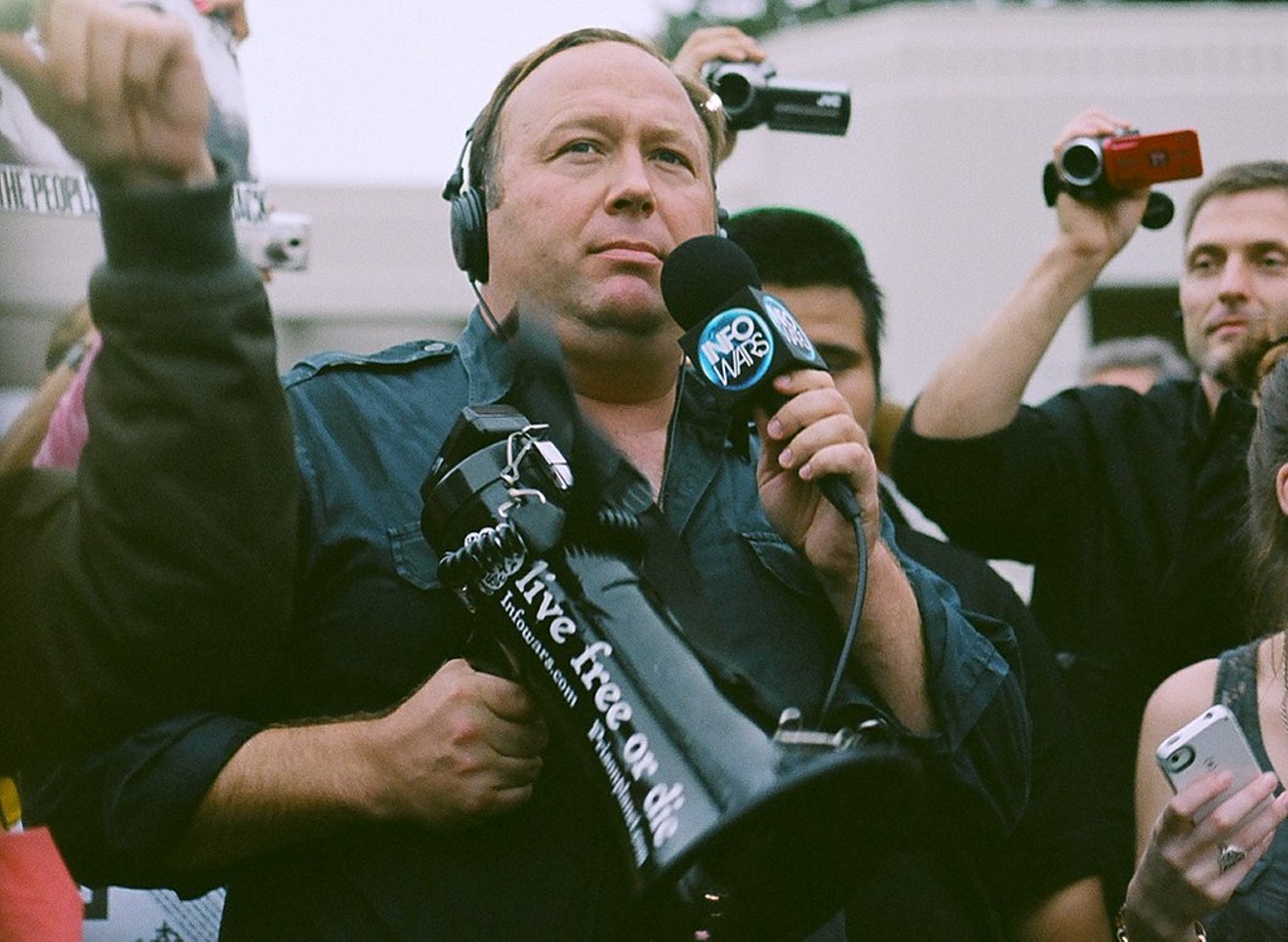 Alex Jones hasn't skipped a beat since losing his recent defamation case. Sean P. Anderson from Dallas, TX, USA, CC BY 2.0, via Wikimedia Commons
Texas-based conspiracy theorist Alex Jones was fresh from the courtroom, where a jury ruled that he must pay millions of dollars to parents of children killed in the Sandy Hook mass shooting because he spread lies about them. So that's when he jumped at the chance to circulate similar conspiracy theories.

On a livestream on his InfoWars website Thursday, Jones warned of a supposedly Democrat-led plot to stage mass shooting hoaxes and even assassinate former President Donald Trump and current President Joe Biden.

“I believe the deep state, they’d kill Biden, which we’re totally against happening, as a pretext to really try to trigger a civil war, and/or Trump,” Jones said on a livestream on his show. “They might actually kill both of them.”

The comments were in response to the FBI's execution on Monday of a search warrant at Trump’s Mar-a-Lago residence in Florida. On Thursday's broadcast, Jones echoed claims he and former Trump White House advisor Steve Bannon had made on Bannon’s War Room: Pandemic podcast on Monday.

Many Republicans nationwide, including in Texas, have claimed the Biden administration has “weaponized” the Department of Justice against the former president. On Thursday, an armed man attempted to enter an FBI office in Cincinnati. During a subsequent standoff, he was shot and killed.

Heidi Beirich, an expert on far-right movements and co-director of the Global Project Against Hate and Extremism, warned that conspiracy theories could further heighten tensions. “All of this is so dangerous – just look at what happened in Ohio with the guy who attacked the field office for the FBI,” she said by email.

Last week, jurors ruled that Jones had to pay Sandy Hook parents, whom he called “crisis actors,” nearly $50 million in compensatory and punitive damages. He's likely to pay only a fraction of that sum, legal experts told Reuters. During the 2012 shooting, a gunman targeted an elementary school and killed 26 people.

“I’m worried that the Biden controllers, the third administration of Obama – I’m worried that Obama and his people may provocateur [sic] some type of big terror attack,” he claimed on Bannon's podcast. “They might launch a cyber attack and blame it on the Russians. They might start a major war.”

Asked about the Mar-a-Lago search on Turning Point USA founder Charlie Kirk’s show Tuesday, Jones described it as a “giant red herring” to prevent Trump from running for office again.

InfoWars host Owen Shroyer, who is facing charges related to the U.S. Capitol riot, also appeared on the One America News network, where he praised Jones' "almost prophetic-like foresight of geopolitical developments and political developments," as reported by the watchdog Media Matters for America.

At the Conservative Political Action Conference in Dallas last week, U.S. Rep. Marjorie Taylor Greene, known for promoting her own conspiracy theories, went to bat for Jones. She told an audience that Jones “is being politically persecuted right now.”

Last week, Greg Kelly, a host at the far-right Newsmax outlet, said Jones was "a bit of a conspiracy theorist," adding: "But at the same time, this is America and you're allowed to say anything."

Jones' legal troubles might not be over. On Monday, CNN reported that a lawyer for Sandy Hook plaintiffs had turned over a cache of the InfoWars founder's text messages to the Congressional committee investigating the Jan. 6 Capitol riot. Jones' lawyer had sent the messages to the plaintiffs' attorney, supposedly by accident.
KEEP THE DALLAS OBSERVER FREE... Since we started the Dallas Observer, it has been defined as the free, independent voice of Dallas, and we'd like to keep it that way. With local media under siege, it's more important than ever for us to rally support behind funding our local journalism. You can help by participating in our "I Support" program, allowing us to keep offering readers access to our incisive coverage of local news, food and culture with no paywalls.
Make a one-time donation today for as little as $1.