Texan activists were among those who helped identify those who attended the Jan. 6 riot at the Capitol and posted images online. Win McNamee/Getty Images
If you ask her, Frisco real estate broker Jenna Ryan is a victim of cancel culture. Her critics say she's something else, and it's not a victim.

Ryan is accused of being among those who stormed the U.S. Capitol on Jan. 6 and was charged by the Justice Department earlier this month. To raise money for her legal defense, she took to online sites PayPal, Fundly and Infusionsoft by Keap, but those companies removed her donation capabilities amid widespread complaints.

After the riot, McKinney activist Courtney Brooks launched a social media campaign against Ryan and other North Texans who attended the capital rally. But even after Ryan was arrested, Brooks wasn’t finished; she also spearheaded the effort to have the broker removed from those payment services.

“I don’t think [Ryan] should get business; I don’t think she should reap any benefits at all anymore,” Brooks said. “By showing her true colors, she has really showed how dangerous she is.”

Brooks said she feels a responsibility to her community to notify them when they live among someone who is “trying to cause harm to our country.”

“To me, it seems like a blatant scam,” she said.

Ryan’s is the latest in a string of takedowns by Big Tech; companies like Facebook and Twitter have suspended or banned the accounts of those who they believe participated in the riots in one way or another, including former President Donald Trump. Many Republicans decry what they view as an infringement on free speech, while liberals insist such bans are necessary to prevent further right-wing violence. 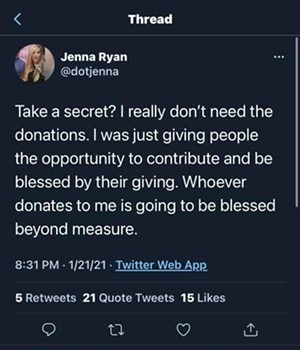 Screenshot courtesy Courtney Brooks
Despite creating what appeared to be appeals for legal defense funds, Ryan tweeted that she wasn’t hard-up for help.

“Take a secret? I really don't need the donations,” she wrote in a since-deleted tweet. “I was just giving people the opportunity to contribute and be blessed by their giving. Whoever donates to me is going to be blessed beyond measure.”

Saturday, in another deleted tweet, Ryan posted about spending $800 on lobster, steak and Champagne. (Although to her credit, she said she paid $400 for a bottle of bubbly that she thought was $100.) In late December, she also tweeted-then-deleted that she didn’t need another stimulus check from the federal government because she has “plenty of money” and is “abundantly blessed," according to an image of the post shared by Brooks.

Brooks widely circulated these tweets and accused the broker of conducting a scam, calling her move to ask for donations “disgusting” and “arrogant.” But Ryan said she merely provided a donation outlet for supporters who asked her if they could help. 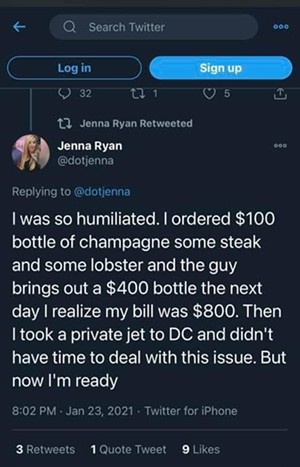 Screenshot courtesy Courtney Brooks
“I’m not a desperado over here; it’s not like I can’t make my own attorney’s fees,” she told the Observer. “I will have to work extra hard to do so.”

PayPal has a policy that allows fundraising for legal defense, a spokesperson said in an emailed statement. The company thoroughly reviews accounts and removes ones that are used for "anything other than legal defense."

Ryan said she’s a "tough cookie" who is a “beautiful person inside and out;" she also says she is innocent. The FBI has charged her with disorderly conduct on Capitol grounds and knowingly entering or remaining in a restricted building or grounds without lawful authority.

“Cancel culture” has become a serious problem, Ryan said, who believes she is being censored.

Eventually, she will “come out on top” because she has integrity, empathy and skills, she said.

Ryan created a board on her Pinterest page that includes images from the Holocaust and World War II. (The link to the page is no longer working as of Tuesday afternoon.)

Her Twitter account had a post in September about her having violated Facebook’s Community Standards for a post in which she said, “Heil Hitler.” Ryan went on to write that “independent thought is a No No on Facebook” and that their move to remove her post “makes me want to say Heil Hitler even louder.”

The original version of this post was deleted Tuesday, but we had a screenshot on hand.
Jenna Ryan/Twitter
Ryan denied having made this post to the Observer, although she did not offer an explanation for how it ended up on her social media.

“I’m against Hitler; I’m against Nazi Germany; I’m against people being killed,” she said. “But the way I’m being treated right now is how they treated the Jews.”

Her Twitter account included a post in support of Kyle Rittenhouse, the Illinois teen who was charged with fatally shooting two Black Lives Matter protesters last summer. She also told the Observer that she “loves Kyle Rittenhouse.”

The tweet on her account was a meme of a victim of Rittenhouse with the words “Shoot me nigga, shoot me nigga.” 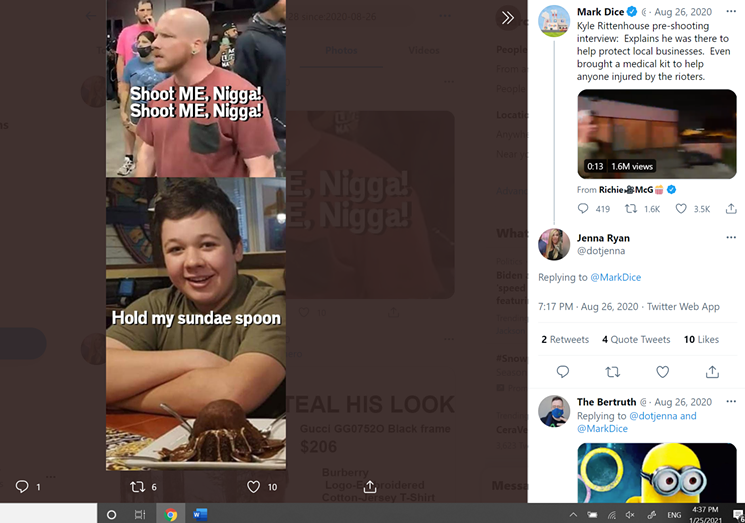 “I do my best work in the dark, OK? … So I don’t need to be out in front of a camera; I don’t need to defend my client. I do my defending in court,” he said, quoting another lawyer.

The Observer has not accused Ryan of being a Nazi. We also sent her attorneys screenshots of these posts at their request and are awaiting a response.

Ryan has flirted with a run for office and counts herself a member of the burgeoning pro-Trump Patriot Party. But now, she said she’s putting politics on the back burner, opting instead to pursue a singing career.

And, after she’s done with her pressing legal fees, Ryan said she’s coming after Brooks for defamation.

“[Brooks] will be regretting the day she said the name Jenna Ryan,” she said. “But right now, I don’t care about her; she’s making me famous.

“Like, ‘Thank you, now I’m going to do my album,’” Ryan continued. “She’s going to end up loving me — you wait and watch.”
KEEP THE DALLAS OBSERVER FREE... Since we started the Dallas Observer, it has been defined as the free, independent voice of Dallas, and we'd like to keep it that way. With local media under siege, it's more important than ever for us to rally support behind funding our local journalism. You can help by participating in our "I Support" program, allowing us to keep offering readers access to our incisive coverage of local news, food and culture with no paywalls.
Make a one-time donation today for as little as $1.