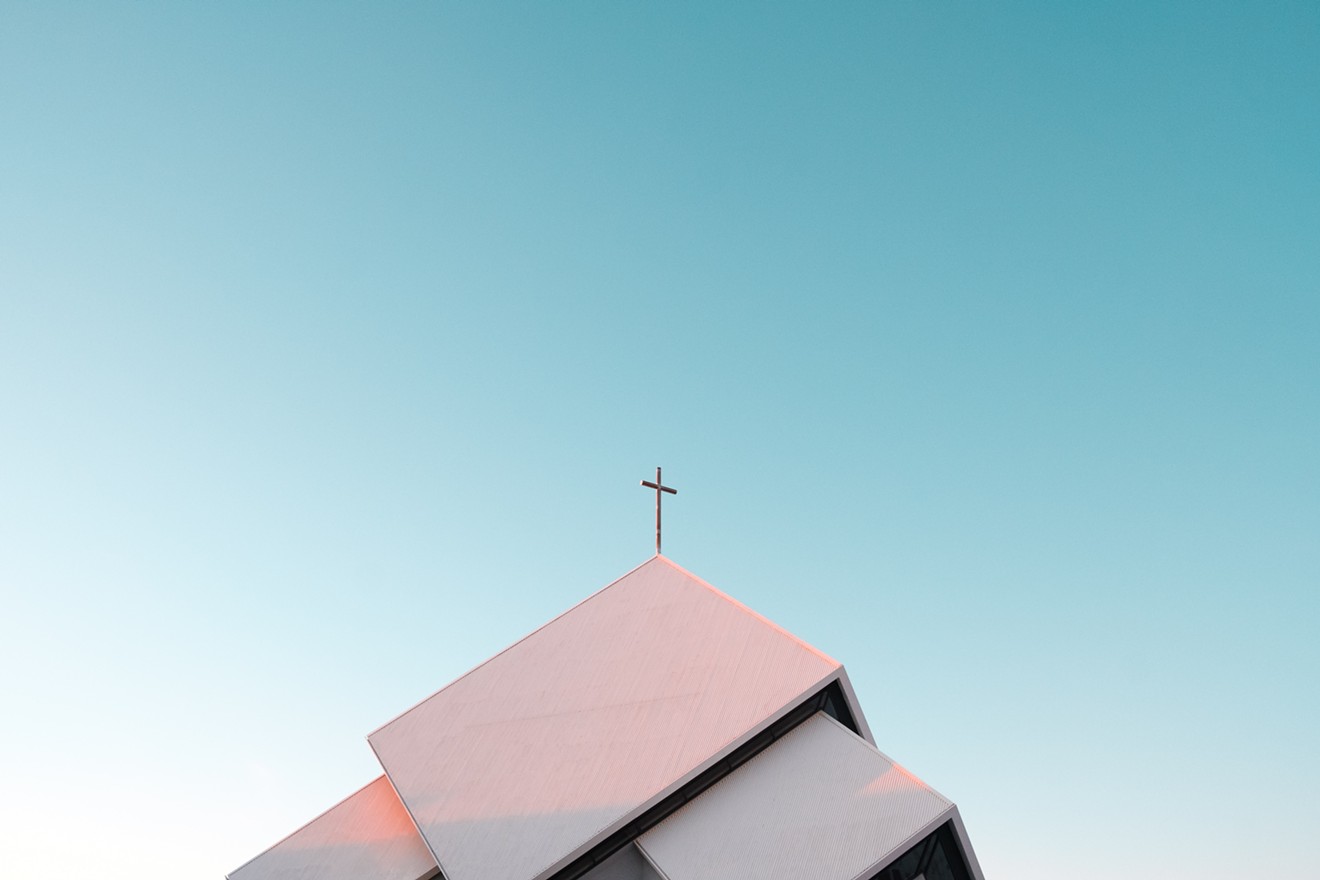 North Texas pastors are heaping praise on the Supreme Court. Photo by Akira Hojo on Unsplash
Two days after the U.S. Supreme Court overturned Roe v. Wade, certain North Texas churches got pretty patriotic. Some pastors opted to celebrate the widespread backtrack of abortion rights by plunging the pulpit into a torrent of red, white and blue.

At First Baptist Dallas, for instance, there was precisely zero separation of patriotism and Jesus-adulation over the weekend. Titled “Freedom Sunday,” the latest service opened with “America the Beautiful” before seamlessly transitioning into the national anthem. Choir members and worshippers waved handheld American flags.

Later, the audience gave a striking “salute to the armed forces,” with congregants dressed as members of the U.S. Army, Navy, Coast Guard, Air Force and Marine Corps. Each posed in full regalia in front of sparking pyrotechnics while stunt people rappelled from the ceiling during the song’s climactic finale.

Pastor Robert Jeffress told his flock that God was to blame — er, thank — for the high court’s abortion about-face.

“Roe is no more,” he said. Applause. “This Sunday, we celebrate what God did this past Friday when he took the most evil, abominable ruling in the history of our country and he threw it into the dustbin of history.” Standing ovation.
Jeffress then heaped praise onto the altar of former President Donald Trump, who, as fate would have it, wound up nominating three justices during his single term.

“God bless Donald Trump for his faithfulness and doing what he promised he would do,” Jeffress said. “We thank God for him, without apology.”

Jeffress wasn’t the only North Texas pastor to opine about Roe during Sunday’s service.

Brandon Burden from KingdomLife in Frisco has been pretty open about his political views in past sermons. He advised congregants on the best way to shoot home intruders in the days leading up to President Joe Biden’s inauguration. He also once called the then-Denton County GOP chair a “Jezebel” and said he had to exercise self-control to keep from choking a woman during a party meeting.

Burden is on a warpath to protect the unborn. Bloviating into a microphone this Sunday, he walked back and forth on a carpeted church floor, surrounded by dozens of audience members.
“There’s a cry of the spirit in the people and it’s crying out, ‘God, use me!’” Burden exclaimed, raising his right arm above his head. “And the Lord of Heaven has heard that cry because we’ve been crying for 60 years for Roe v. Wade, 60 years we’ve cried on our face. … And after 60 years God heard the cry of a generation and he answered us.”

Meanwhile, in Fort Worth’s Mercy Culture Church, Pastor Landon Schott called Roe’s undoing a “miracle.” “ROE V WADE OVERTURNED” appeared in all-caps on a screen behind him while he claimed that “all of heaven is rejoicing.”

He then credited “generals of the faith” for “petitioning Heaven” for the landmark ruling to be overturned. “Can we just give the Lord one more hand of praise?” Schott said to emphatic applause.
Fort Worth Star-Telegram reporter Emily Brindley noted on Twitter that the pastor let his bias show when he made a crack about transgender female swimmers. Schott also preached that the “war on women began in the beginning.”

“It’s amazing that we can’t define a woman when we’re determining who should play sports, but when Roe v. Wade is overturned, all of a sudden, we can define women again,” Schott said. “So let me help you define a woman: A woman is the one with a womb.”

Yeah. A womb that she no longer has autonomy over.
KEEP THE DALLAS OBSERVER FREE... Since we started the Dallas Observer, it has been defined as the free, independent voice of Dallas, and we'd like to keep it that way. With local media under siege, it's more important than ever for us to rally support behind funding our local journalism. You can help by participating in our "I Support" program, allowing us to keep offering readers access to our incisive coverage of local news, food and culture with no paywalls.
Make a one-time donation today for as little as $1.