With New Kitchen, Alexandre's Serves Chick-full-gAy Sandwich on Sundays Only 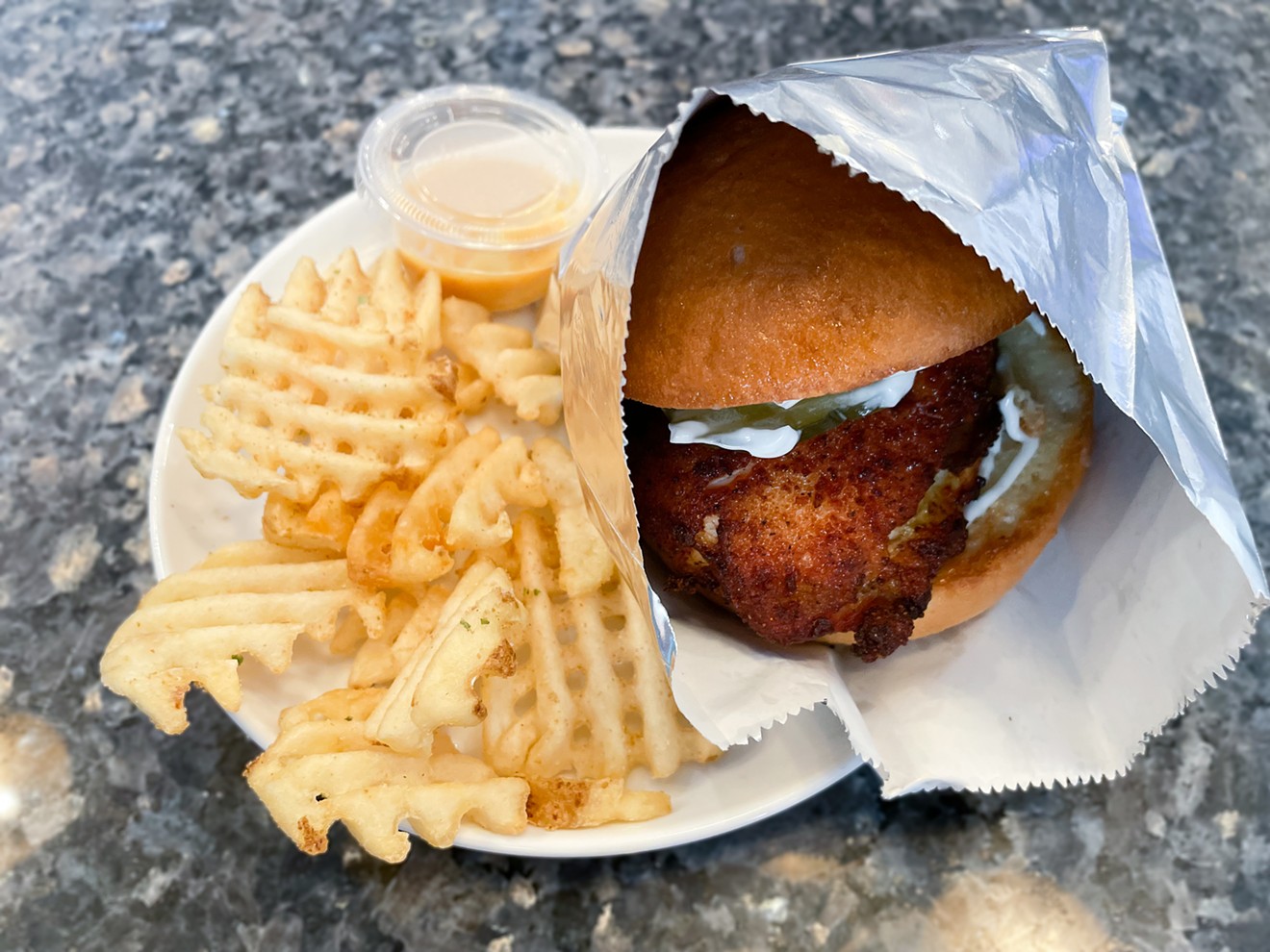 Alexandre's Chick-full-gAy sandwich with a side of waffle fries. Alex Gonzalez
At long last, one of Cedar Springs’ most eclectic watering holes serves food. Built out of an old doughnut shop next door, Alexandre’s new kitchen is serving up bar bites and plates just as lush as its cocktails.

At the helm in the kitchen are executive chef Sharina Hassell and sous chef Luis Lara. When Hassell heard Alexandre’s owner, Lee Daugherty, was planning to serve food at Alexandre’s, Hassell, who has more than 20 years of experience working in kitchens and catering settings, approached Daugherty with a curated menu. 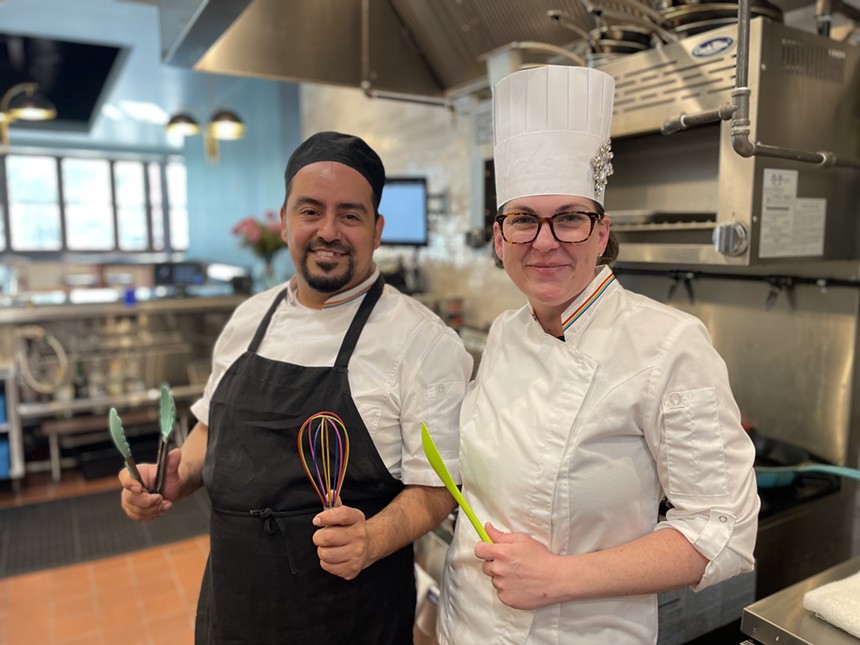 Sous chef Luis Lara and executive chef Sharina Hassell in Alexadre's new kitchen.
Alex Gonzalez
“Lee and I started talking about how we could use our food service in an ‘activist’ way,” says Hassell.

Sure enough, both the space and the menu align with Daugherty, Hassell and Lara’s socially conscious values that go beyond typical bar food. While many are familiar with Alexandre’s cocktail lounge space, the restaurant expansion boasts accessible seating; large tables are designed for sharing meals, and a low-set booth-style long seat allows guests in wheelchairs to easily slide in and out. There aren't greasy, heavy-sitting nachos or hefty burgers here, but rather light bites just as queer as the space they occupy.

“When you take on such an endeavor, there are risks involved,” says Lara. “You can't tell what the future holds, but it is also very exciting. And that, to me, is appealing.”

Since launching the restaurant concept this past summer, some of the customer favorites include the LGBTea Time, a plate of LGBTQ-themed cookies colorfully decorated with phrases like “gay AF,” and served with tea or French press coffee ($8). Guests of Alexandre’s have been equally curious about the poutine, a plate of fried potatoes with herb-spiced brown gravy and cheese curds ($10), and the deep-fried Brussels sprouts ($8).

For larger items, try the slider bites, available in both meat and vegan iterations ($12/$16), or the wasabi shrimp, sauteed in a wasabi lemon butter and a knot of fried rice noodles ($15).

Perhaps one of the most popular items on the menu is one introduced just last month, the Chick-full-gAy sandwich ($12). The idea for the sandwich was to create a fried chicken sandwich that tasted just as good as that of a fast-food chicken chain, which Hassell refuses to name, with a documented history of anti-LGBTQ stances.

“We joked about the sandwich before the restaurant was even built,” Hassell says. “When it came to service, and making up new recipes and whatnot, I fiddled around with it for a day or two, and the recipe came out very much like a certain chicken sandwich place. And it kind of stuck from there. He [Daugherty] named it, and we've been serving it on Sundays ever since.”

And Hassell's right. The sandwich does taste almost exactly like that of its inspiration. From the flaky crust to the juicy pickle brine, the sandwich is so damn good, the LGBTQ+ community has no excuse to support any fast food company with a history of homophobia and transphobia.

Unlike the unnamed restaurant chain to which Hassell is referring, which is closed on Sundays, Alexandre’s offers their Chick-full-gAy sandwich only on Sundays.

Alexandre’s is always popping on Sundays, especially as the LGBTQ+ community celebrates Sunday Funday. So, if you want to be sure to get a sandwich, show up early, as they’ve sold out every Sunday since the launch.

While the kitchen closes at 5 p.m. on Sundays, people stay at Alexandre’s well into the evening, shooting the shit about politics, making classic Frasier references or jamming out to music videos, playfully arguing about who’s the most iconic diva.

With its new food menu, Alexandre’s continues to be a space for the community and every single faction of it.

“Even though we're on the strip, this isn't necessarily an LGBTQ+ bar,” says Lara. “It's a place for everyone, but we're still pushing the envelope by being out and proud.”
KEEP THE DALLAS OBSERVER FREE... Since we started the Dallas Observer, it has been defined as the free, independent voice of Dallas, and we'd like to keep it that way. With local media under siege, it's more important than ever for us to rally support behind funding our local journalism. You can help by participating in our "I Support" program, allowing us to keep offering readers access to our incisive coverage of local news, food and culture with no paywalls.
Make a one-time donation today for as little as $1.