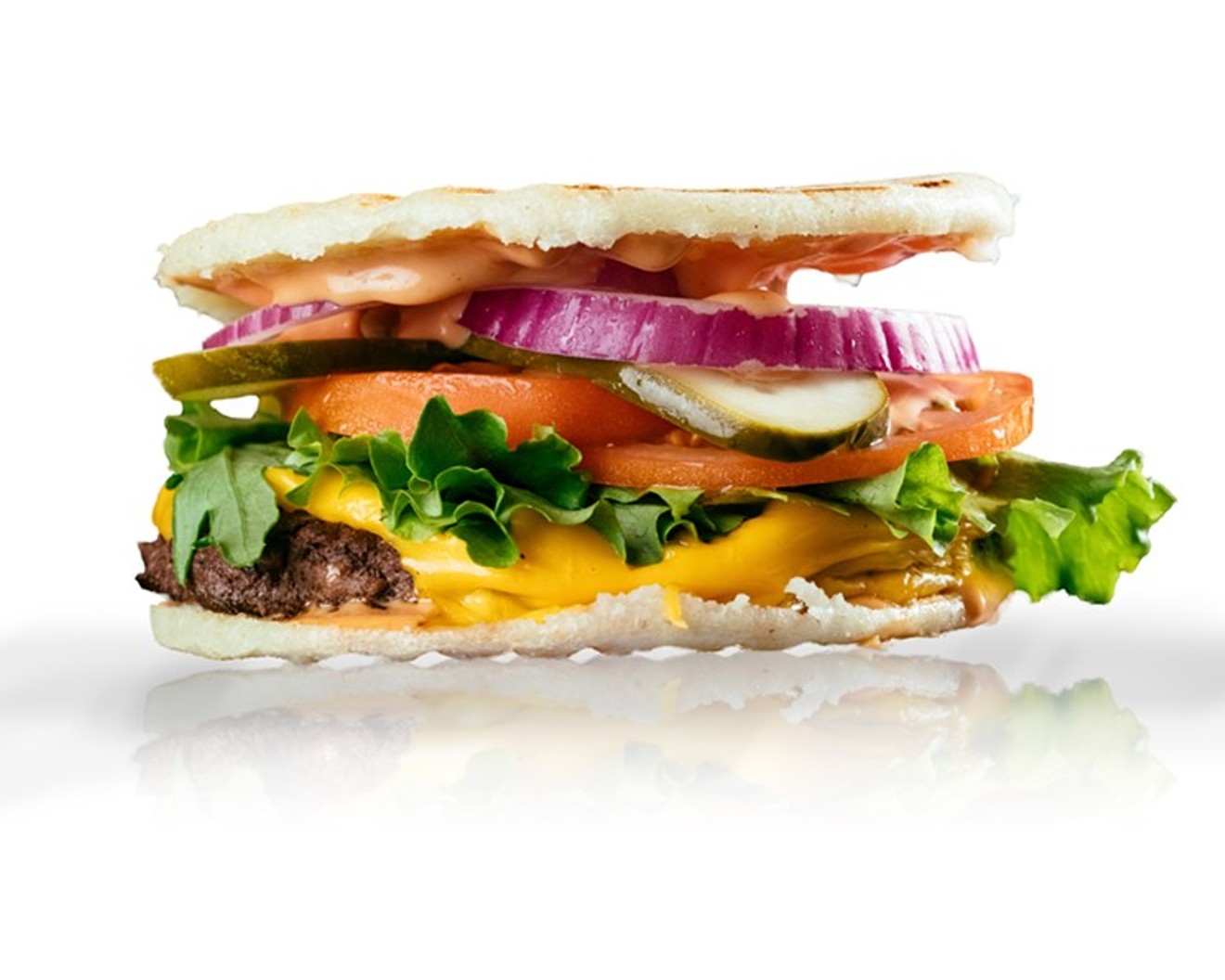 Behold, Arepa TX's arepa burger, in all its nontraditional bun glory. Kathy Tran
May is National Burger Month (yes, that's a thing) and to celebrate, we're spending an entire week celebrating what may well be Dallas' officially unofficial dish: the burger. From April 30 to May 8, writer Nick Rallo will explore every corner of Dallas burgers, from the grass-fed to the uber-greasy and even lab-grown. Grab a stack of napkins and join us.

The first round of people who walked through MaryAnn Allen’s door were angry.

They were the traditionalists dedicated to the classic presentation of arepa sandwiches. Carne mechada — beef bathed for hours, shredded and coated with a shining sofrito of onion and garlic and leeks — is one old-school prep. The mechada was added to a later version of the Arepa TX menu. Why? When Arepa TX first opened, Chef Allen’s menu was more of, as she carefully calls it, a fusion. There was a Baja-style fried fish arepa, and there was — the most disappointing to purists — a cheeseburger. A cheeseburger with American cheese and pickle and everything.

“People were really upset,” she says. The Americanization of the arepa flustered customers.

The thing is, Allen knew exactly what she was doing. She's a beam of light in person and over the phone. A fresh well of excitement bubbles over in every conversation about food. She wants her food to elate people.  “We had to educate on what an arepa was,” she says.

The arepa is a superhero food. Allen knows it is. It's also an ingenious bookend to the flavors of a cheeseburger. Her arepa is thin as a Hallmark card, crusty on the outside and fluffy inside. Cauliflower crusts, avocado halves, lettuce cups, eggplant, sweet potatoes — none really work as a bun alternative. Ingredients on these options slip around like a gushing Hurricane Harbor ride. Most bun alternatives tear down the seams, crack and crumble, the floor is falling apart in your hands. Cheeseburger parts will tumble down to the basement. Most bun alternatives are booby traps. 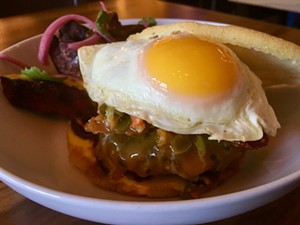 The arepa burger at Shoals is topped with a fried egg and will set you back only $7 during happy hour and $14 otherwise.
Nick Rallo
The arepa, sturdy and beautifully mono-flavored, is the only bun swap that works. It is a few, achingly-bright flavors of sunshine, corn and water. It sears and grills ingeniously, embossing with char lines. It’s both rib-sticking and light, crusty outside and fluffy inside. Wrapped around a brisket and short rib blend patty, the arepa is complemented by lettuce, tomato, pickle, onion and yes, "secret sauce."

At Shoals and Sounds, the labors of the shell — very fine cornmeal, some water and salt smushed into a batter and fried in oil — present as big, building-sized tastes in your mind. You see corn and salt. The arepa sturdily hoists up a hulk of a burger, pickled vegetables and a fried egg without incident.

Allen’s arepas, meant to act as pockets for all types of sandwiches, go like this: They start with hot water. Flour whisks in until it’s porridge. Her cooks pancake the mixture back and forth by hand. The dough is kneaded for a few minutes. The tough-worked dough sits, is rolled out into circles, sized out using seasoning lids and stamped in the panini press. The result: a thin, crackly shell with a rich, soft interior that can be stuffed with damn-near anything. Put an iPhone charger in an arepa with some hot sauce and it might end up as a tasty snack. Arepas transform things.

A year and a half after opening, the arepa cheeseburger is embraced at Arepa TX. Allen says her formerly enraged customers are embracing the fusion. The brisket arepa is a top-seller because brisket just works between a crunchy corn shell. Recently, she tried dropping Sichuan shrimp into her corn shells. “Nah,” she says, laughing. That one didn’t work. It’s the only one so far.

Arepa TX, 5940 Royal Lane (North Dallas)
KEEP THE DALLAS OBSERVER FREE... Since we started the Dallas Observer, it has been defined as the free, independent voice of Dallas, and we'd like to keep it that way. With local media under siege, it's more important than ever for us to rally support behind funding our local journalism. You can help by participating in our "I Support" program, allowing us to keep offering readers access to our incisive coverage of local news, food and culture with no paywalls.
Make a one-time donation today for as little as $1.
Nick Rallo
Contact: Nick Rallo