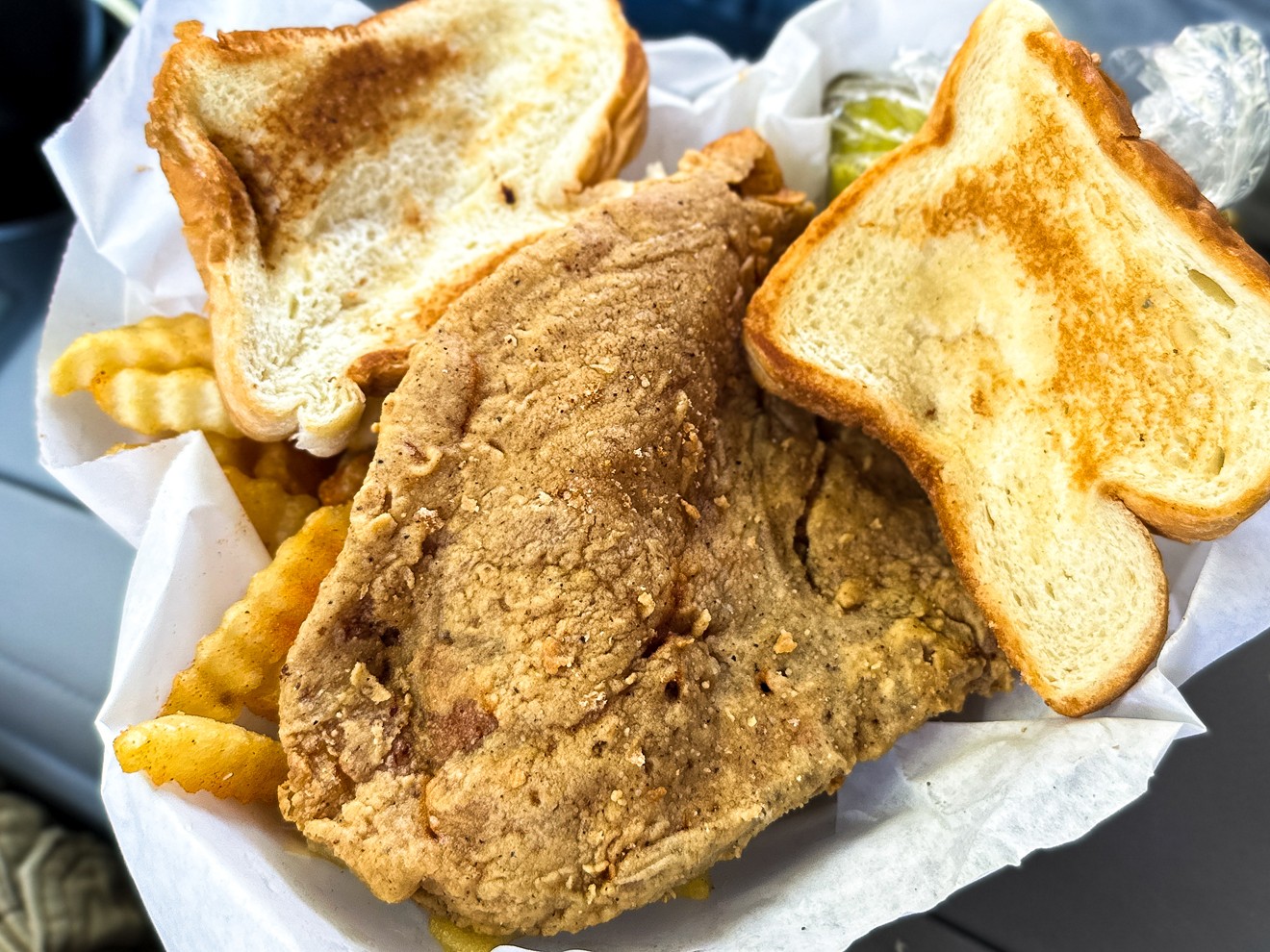 Fried pork chop basket, including fries, toast, jalapenos and pickles. Pretty... pretty good. Hank Vaughn
In the '70s in the Midwest, small corner stores could be found  in almost every neighborhood before stricter zoning regulations and mega supermarkets drove almost all of them out of existence. We'd often be sent to the corner store when our mothers needed a stick of butter, pound of liver or pint of milk at the last minute, and occasionally we were allowed to use the change to purchase some candy as a reward: even a penny could get you a piece of Bazooka Joe bubble gum, and a nickel could score some wax lips if you were into that sort of thing.

While urban sprawl has obliterated these corner stores in North Texas suburbia, occasionally they (or at least close approximations) can be found in the older parts of Dallas proper. Jimmy’s Food Store is one such example, and another is Big Daddy’s Convenience Store, a couple of miles south of Fair Park at the corner of Colonial and Pine. Big Daddy's was mentioned as an essential hidden gem in a recent article in the Observer. 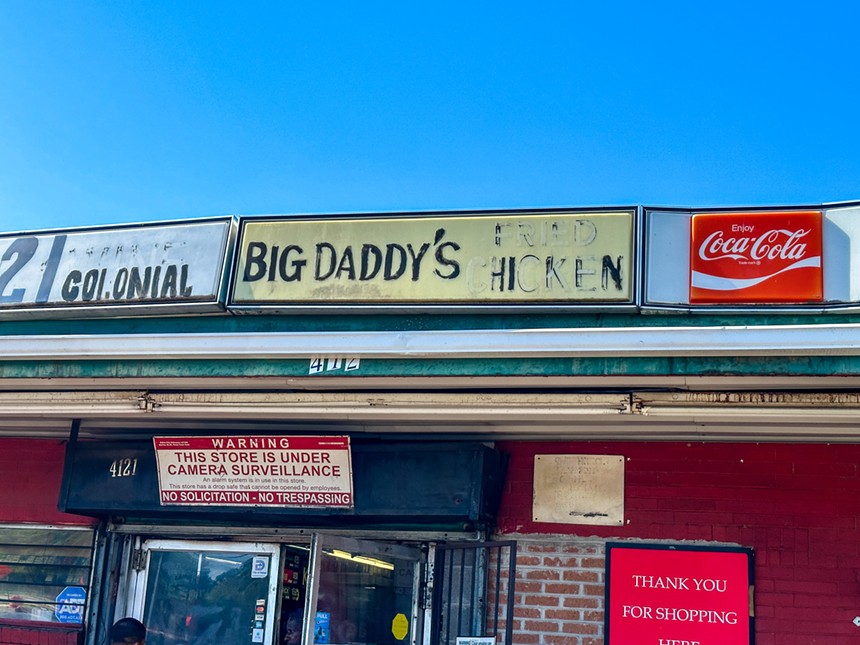 Big Daddy's Convenience Store is an old-school corner grocery store that can also fry you up a good meal.
Hank Vaughn
As is the case for most corner stores that survive, Big Daddy’s is more than a grocery store. There's a whole bunch of food available at the back of the market such as chicken, pork chops, burgers, breakfast sandwiches and plates, and even some salads. It’s a popular place with locals, so be prepared to wait for your order. You can pretty much give up on the idea of parking in the attached lot, too. If you do, there’s a good chance you’ll be blocked by double-parkers picking up their fried chicken basket. 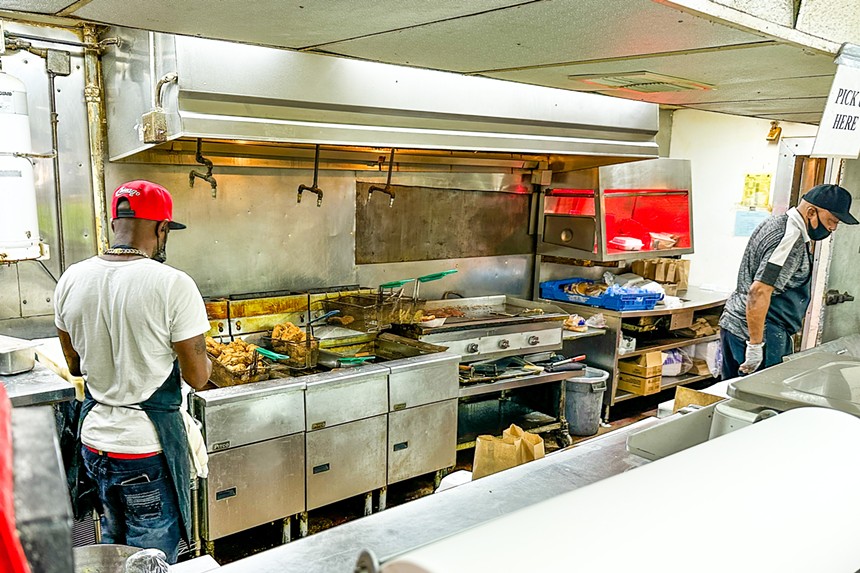 At the back of the store are the deep fryers and grills, where you can order some fried chicken, a burger, a fried pork chop, or a salad for the health nuts.
Hank Vaughn
This isn’t health food, of course, but it’s extremely inexpensive and very tasty to boot. The main draw appears to be the fried chicken, which comes in several combinations, including by the single piece. A thigh will set you back $1.09, for example, or a breast $2.99. Also available are two- and three-piece combos, in every dark/white combination, as well as whole chickens or dinner baskets, which include your chicken choice (number of pieces, which piece, etc.) plus fries, jalapeños and pickles. A two-piece mixed dark and breast basket, for example, will cost you $4.99.

We went with a burger basket and a fried pork chop basket, as well as a small chicken salad. While we waited, we wandered around the store a bit and did some people-watching. A dozen or so people patiently waited for their food, and lots of conversations were competing with the sound of sizzling oil in the deep-fat fryers in the back.

Hamburger basket with fries, all for under $4.
Hank Vaughn
The burger basket was less than $4 and came with fries. It was a decent burger on a nicely toasted bun and was pretty reminiscent of burgers cooked on the grill at your uncle’s patio in late July. Not spectacular, but above average, and the crinkle-cut fries were perfectly cooked.

The fried pork chop basket (pictured above) was less than $5 and came with a very large bone-in fried pork chop, French fries, jalapeños, two pieces of toast and a bunch of pickles. Have we mentioned it was under $5? It was one of the best-fried pork chops we’ve ever had (though truth be told, it may have been the first). Not dry, not greasy, full of meaty flavor.

Small chicken salad comes with a side of bones.
Hank Vaughn
The chicken salad consisted of chopped lettuce, tomatoes, onions and a bunch of sliced and diced fried chicken breast pieces piled on top. This was the small version, and it was almost too much. Included with the salad were the “bones” (presumably from the source of the chicken that was in the salad), wrapped separately. They may be called bones, but they made a lunch meal the next day just by themselves: plenty of juicy meat remained along with some wonderfully crispy and flavorful fried skin. 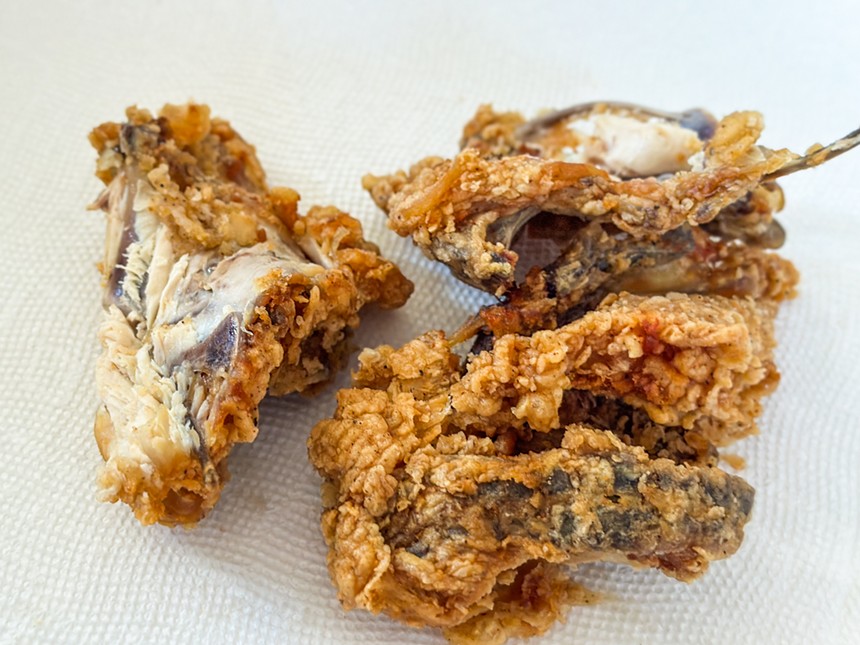 These are the "bones" that come with your chicken salad. More than bones, they provide a wonderful snack of delicious meat and decadent crispy chicken skin.
Hank Vaughn
This can be a drive for those of us who live anywhere but South Dallas, but if you find yourself in the neighborhood, it's definitely worth a visit. Pretend you’re doing a shopping errand for your mom, but instead of buying penny candy, indulge in a bit of deep-fried meat. You only live once.

4121 Colonial Ave. 7 a.m. – 8 p.m. Monday – Friday; 8 a.m. – 8 p.m. Saturday; 8 a.m. – 4 p.m. Sunday.
KEEP THE DALLAS OBSERVER FREE... Since we started the Dallas Observer, it has been defined as the free, independent voice of Dallas, and we'd like to keep it that way. With local media under siege, it's more important than ever for us to rally support behind funding our local journalism. You can help by participating in our "I Support" program, allowing us to keep offering readers access to our incisive coverage of local news, food and culture with no paywalls.
Make a one-time donation today for as little as $1.