Chapulines: Is the Grasshopper Protein of Oaxaca the Future for the Rest of Us? 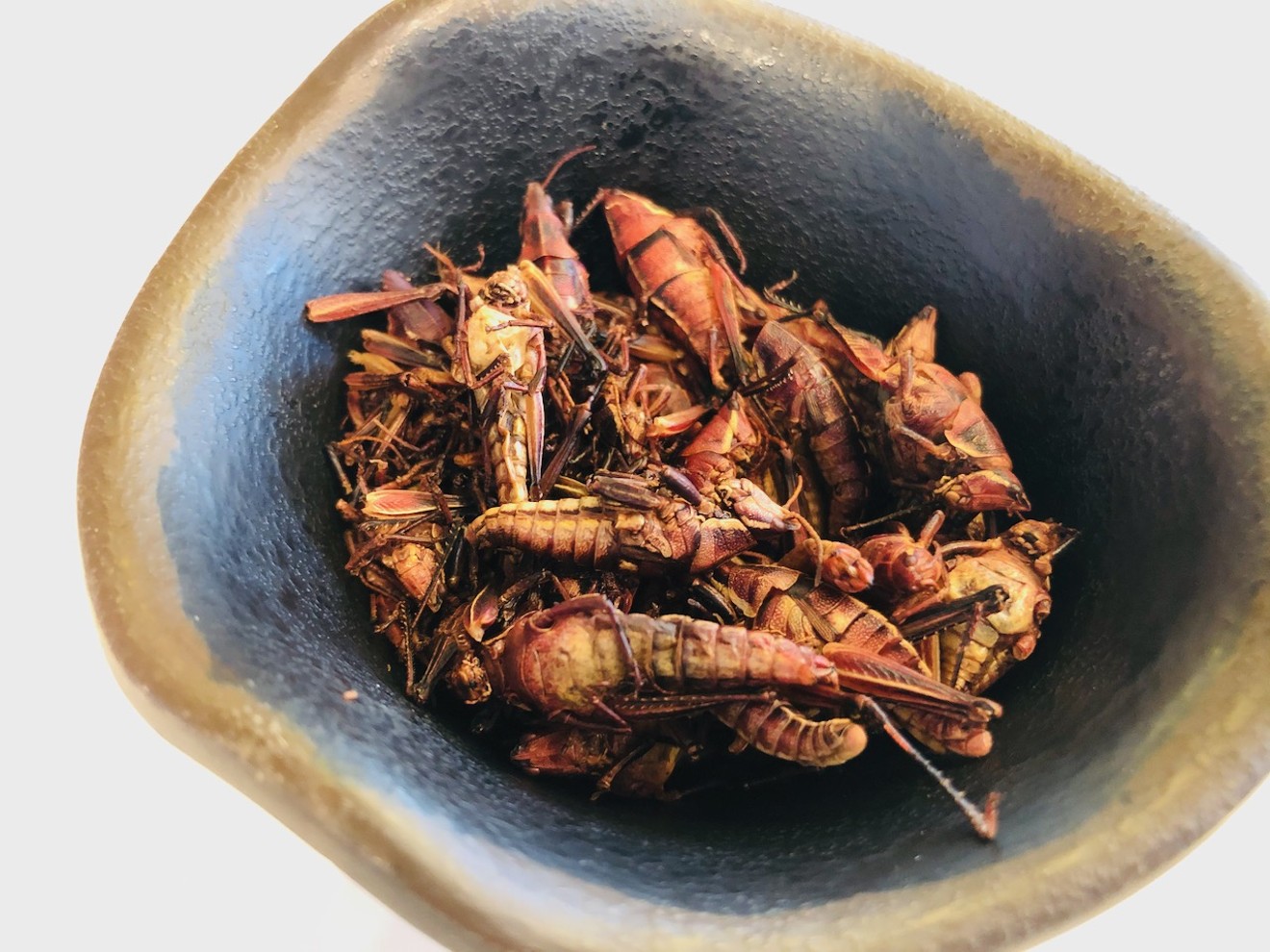 It's not ewww. It's sustainability. Lauren Drewes Daniels

You might want to start getting your head around the idea of eating insects as a source of protein. If one were to earnestly break down the differences between eating, say, beef from a cow raised at a giant feedlot and a small grasshopper, any heebie-jeebies toward the latter might seem unreasonable.

Regardless, as the human population continues to grow, increasing scrutiny is being given to the resources required to satisfy our craving for beef.

The push for insect protein is gaining attention. An August 2019 study from Korea states, “Such efforts involve continuous education and promotion regarding the potential for edible insects to solve environmental, population, and land-availability problems today and in the future.”

And this Engadget article by Andrew Tarantola is succinctly titled, “Get ready to eat bugs if you want to live beyond 2050.”

The money behind the movement is getting serious traction as well. Business Insider reported this week that "the insect protein market could be worth $8 billion by 2030, up from less than $1 billion in 2019."

In Mexico these small, rust-colored grasshoppers have been a popular source of protein for centuries, particularly in the state of Oaxaca, where they are sold by the pound and eaten like candy.

There’s a distinct pattern of chefs traveling to Oaxaca and falling in love with the culture and cuisine — including chapulines — as did Enrique Olvera of Pujol in Mexico City, who on Netflix’s Chef’s Table explains how he uses chapulines in sauces and dreams of retiring to Oaxaca. 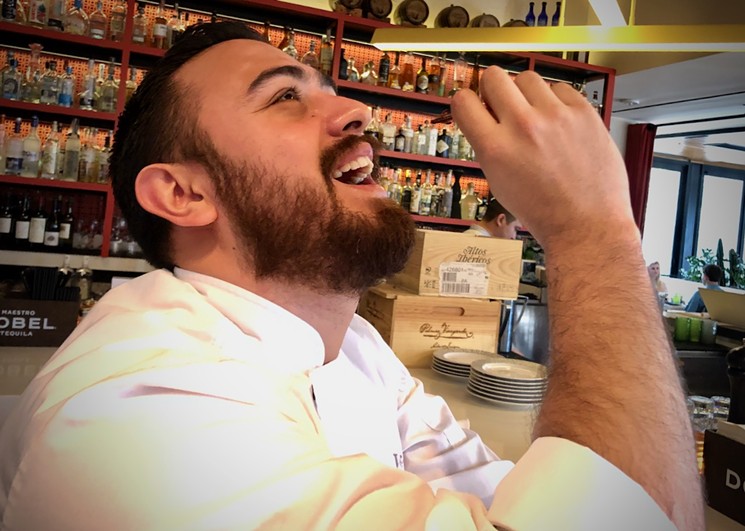 Chef José Meza having fun with his snack
Lauren Drewes Daniels
Locally, chef Peter Barlow of Fauna and José Meza of Jalisco Norte use chapulines in dishes. At El Oaxaqueño in Oak Cliff, chapulines are certainly prominent on the menu.

“Eating insects started before the Spanish arrived in Mexico,” says Meza, while sitting at the bar at Jalisco Norte with a small bowl of chapulines in front of him. “The Spanish brought pork and beef. ... They introduced those animal proteins to the Mexican diet.”

As for taking guidance from the Oaxacans on cuisine, there’s just something about the food there.

“I’m from Mexico City, and so I believed I was cooking authentic Mexican food until I went to Oaxaca,” Meza says. “I don’t know what it is about Oaxaca and why exactly I had that connection, but when I had my first bite in the markets or restaurants, it was like my first real bite of Mexican food.”

Meza points to the freshness, flavor and cooking techniques, saying that the food they serve in restaurants is the same they make at home.

“It’s all the ingredients and techniques,” Meza says. “Oaxaca has like eight different regions, with a lot of variety of ingredients, so they can get a lot of things just there.”

If popping a whole exoskeleton into your mouth is too boorish, Meza points out there are other ways to work insect protein into your diet. “It can be a powder or in bars, so that you don’t necessarily see the product, but you’re getting the protein and benefits in there.” 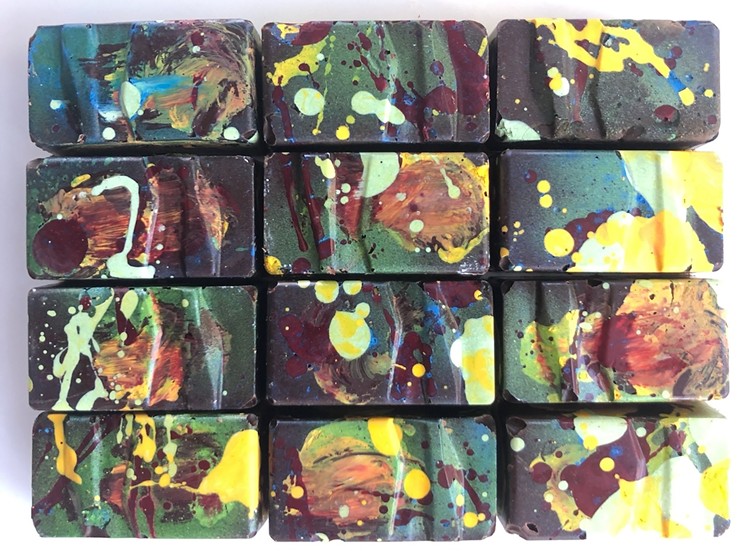 Chocolates with chapulines
Chef Peter Barlow
Which is exactly how Barlow used the protein in his menu at Fauna.

“I use edible insects in a variety of ways for different reasons,” Barlow says. “After traveling to Oaxaca a few years back, I got to experience escamoles [ant larva], chicatana [flying ants] and various flavored chapulines. I’ve found that the flavor profiles are fantastic for dessert chocolate, bonbons, crusts on steaks and fish and sauces.”

Meza offers chapulines as a side item, around 20 or so in a small bowl flavored with garlic oil, lime juice and a house-made chili powder. He says that about 90% of the customers who order do so just for fun, then he playfully imitated a child flying one through the air.

Last week, Meza posted a photo of a chapuline taco on his restaurant's Facebook page — a tortilla with about a dozen chapulines sprinkled over a smear of guacamole. His intent was to expose people to the idea of eating ingredients in different ways, which is something we all just might need to get used to.

“Research has looked at the environmental effects of raising cattle to that of chapulines, and the water required is far greater for cows,” Meza says.

Aside from the sustainability of moving toward insect-based proteins, chapulines are actually pretty good, especially when flavored with a salty, sweet tartness.

If you go to Jalisco Norte or El Oaxaqueño and decide to try them, here's one tip: Pull the legs off before eating. It’s a game-changer.
KEEP THE DALLAS OBSERVER FREE... Since we started the Dallas Observer, it has been defined as the free, independent voice of Dallas, and we'd like to keep it that way. With local media under siege, it's more important than ever for us to rally support behind funding our local journalism. You can help by participating in our "I Support" program, allowing us to keep offering readers access to our incisive coverage of local news, food and culture with no paywalls.
Make a one-time donation today for as little as $1.