DFW Airport's Swank New Flagship Lounge Is a Traveler's Dream, or Yours for $150 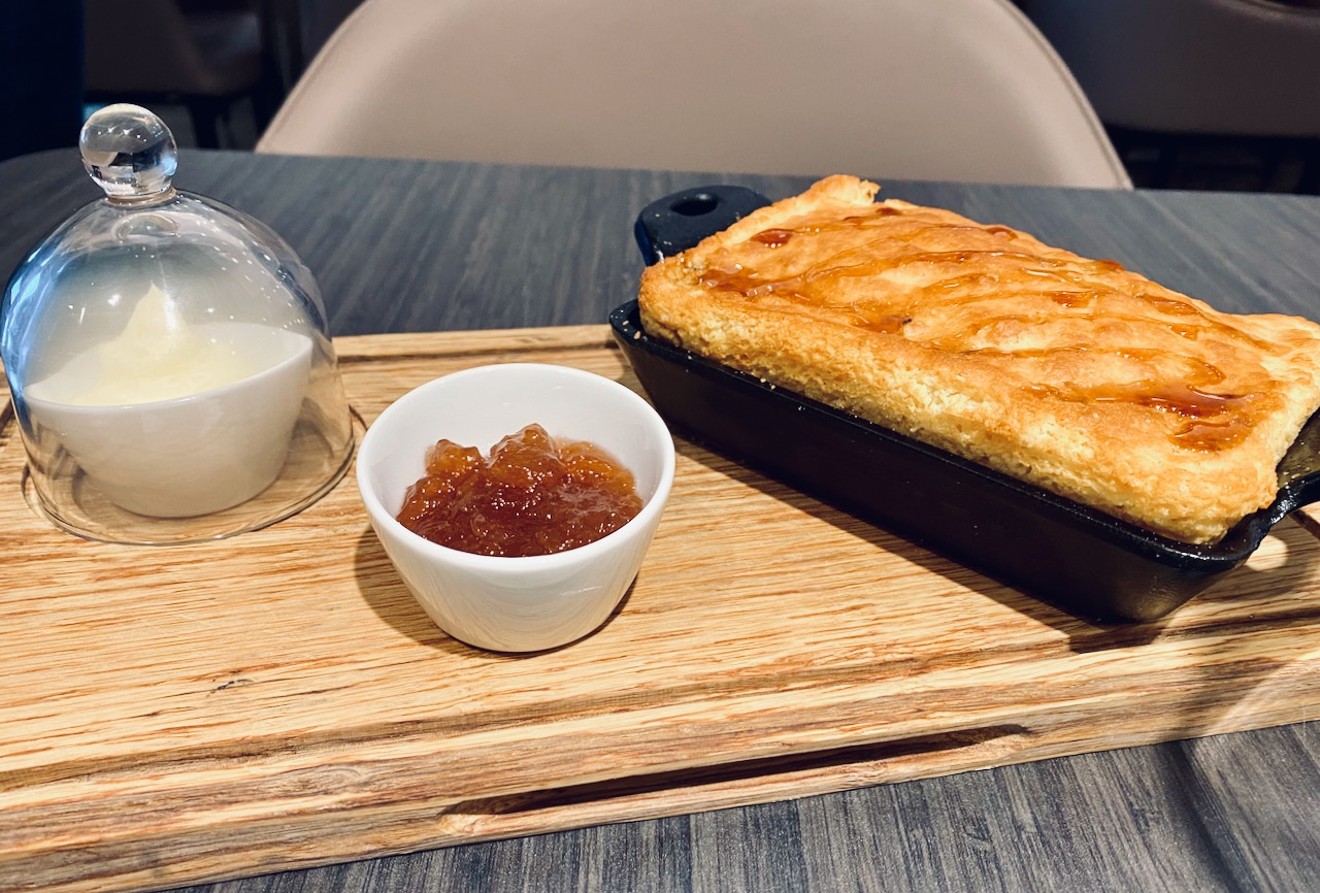 The Flagship Lounge opened this week in Terminal D, not far from other restaurants like the Flying Saucer and a soon-to-open Whataburger. There are four other such airport lounges in the U.S.: Chicago O'Hare, although temporarily closed, Los Angeles International, Miami and and John F. Kennedy in New York. The lounge sits above the regular terminal space; an elevator ride up one floor sets you out in a stylish lobby where guests are greeted with a glass of chilled Champagne.

This lounge is primarily a respite for high-flying — literally and metaphorically — international travelers. It's a who's who club for airports. Read the full list of qualifying credentials on American Airlines’ site. In general, you’ll need to have a seat in first-class or business class on an international or select transcontinental flight, the latter of which isn’t applicable to DFW since we're middle continental. You can also get access if you have an Executive Platinum, Platinum Pro or Platinum AAdvantage card and you're on an international flight. Or if you're MVP Gold 75K or MVP Gold.

Finally, George Clooney-types à la Up In The Air who have the ConciergeKey status most certainly get in. And if you book a seat on a Flagship flight, you also get access.

Or you can buy your way in, because this is America, after all. For $150 per person and a boarding pass for that day, anyone can get a one-day pass, which makes this seem affordable because many of us could spend that in the airport bar if we had a long layover. 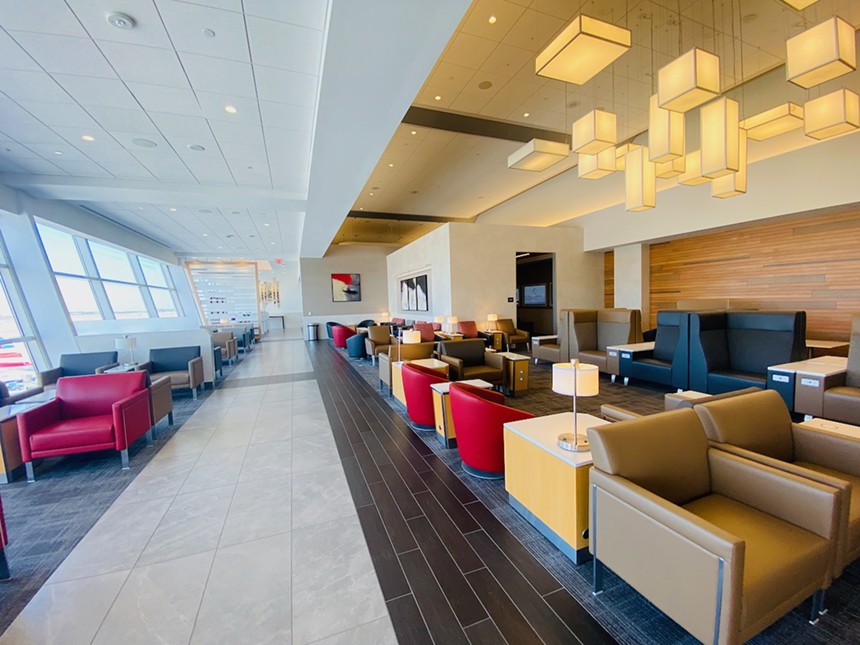 American Airlines Flagship lounge is stacked with posh amenities.
Lauren Drewes Daniels
This gets you in the lounge, but not the Flagship restaurant.

The best thing to liken this space to, once inside, is an upscale all-inclusive hotel lounge and bar; without a swimming pool and all that jazz. There's an open bar, chef-prepared food and comfortable couches, chairs and nooks for relaxing. There are also shower suites with fancy soap from a boutique shop in Colorado.

A solid wall of glass separates the lounge from airplanes and the tarmac below. There are enough couches and plush chairs for a small army. Just about every seat has an electric outlet. There are slightly partitioned groups of seating for a bit of privacy, and the walls are full of art.

An open bar and self-serve dining area are about halfway down the lounge. The food here is on the fast-casual side, but chef prepared. Breakfast, lunch and dinner are served. Flagshippers can grab whatever they want or need; once you’re in it’s all free. Including booze. 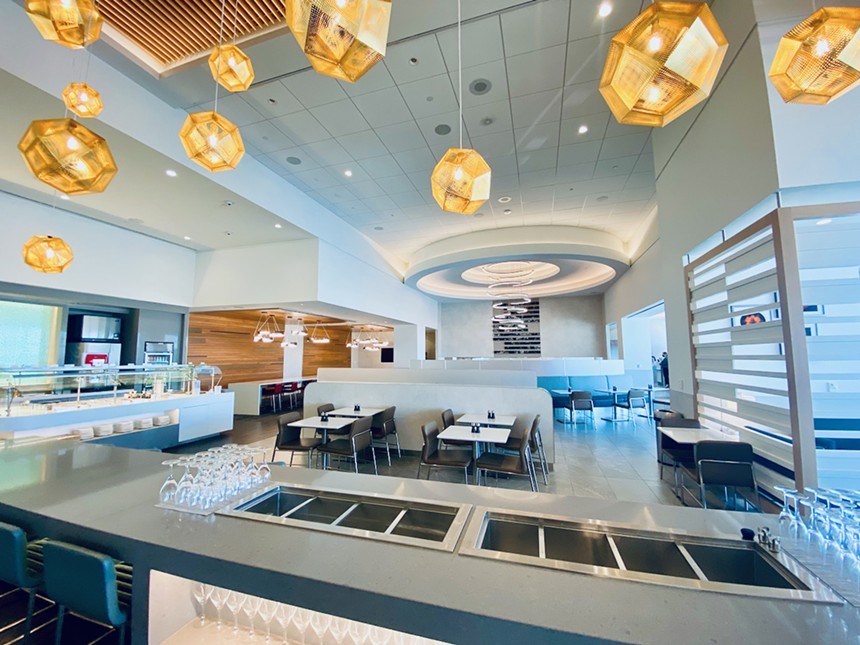 The self-serve area in the lounge has some tables and is surrounded by more casual seating.
Lauren Drewes Daniels
A little past the lounge is the Flagship First Dining, AA's private restaurant. This is where we met Derry. The James Beard Foundation started collaborating with Derry and American Airlines on creating this restaurant and menu two years ago. Obviously, that got put on hold. Derry has since opened her new restaurant, Roots Southern Table, which was recently named a semifinalist for best new restaurant in the nation. She's also nominated for best chef in Texas. 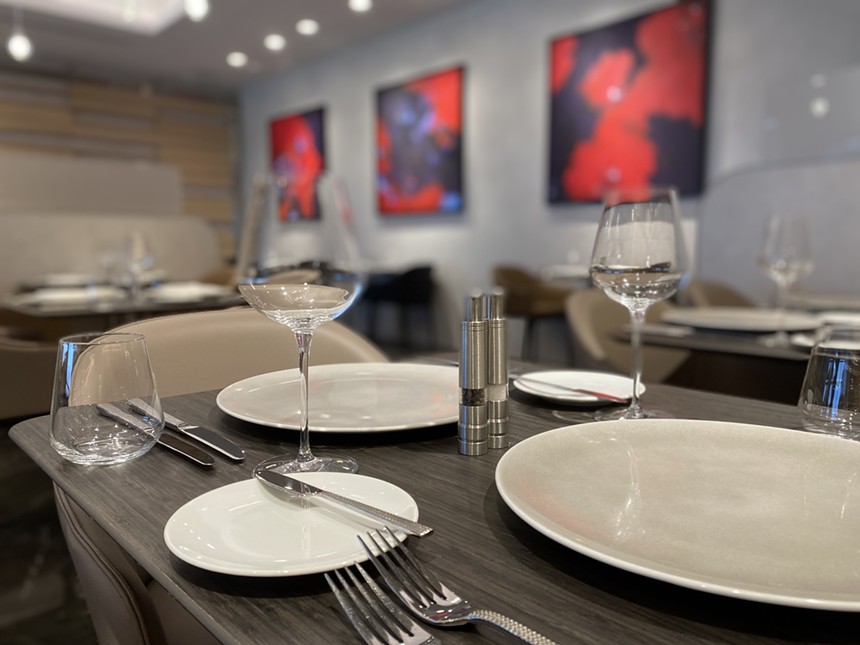 Airport dining never looked so good.
Lauren Drewes Daniels
It should be noted that the $150 day pass does not include access to the Flagship restaurant. You may have to fly around the world for that.

Derry’s has imbued the menu with touches of Roots, and while her beloved duck-fat fried chicken isn't on offer, the other dishes are a tribute to one of the finest restaurants in our city. On the day we were invited to visit, we tried a skillet cornbread with smoked butter and jam. Even though this is a starter, this is a homecoming meal: hearty, warm, both salty and sweet. Travelers get a true taste of the South here. 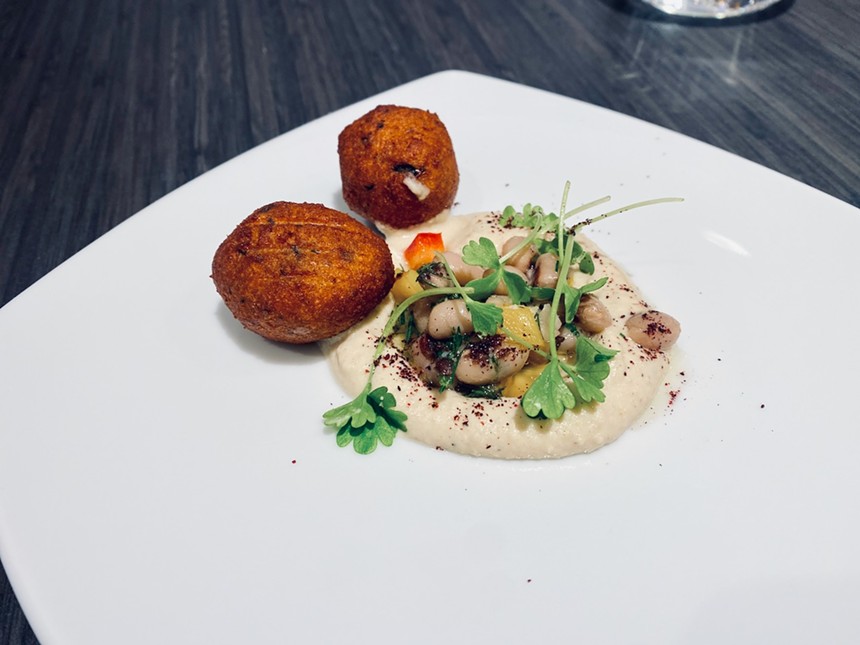 Akara and black-eyed pea hummus
Lauren Drewes Daniels
A black-eyed pea hummus is served with akara, the fried black-eyed pea fritters that originated in Nigeria. With this, Derry wanted to offer a vegetarian Southern dish. She came across akara after researching a way to get more creative with black-eyes peas. The light hummus is topped with a tangy vinaigrette. It's best to tear into the akara and use shells to scoop the hummus. 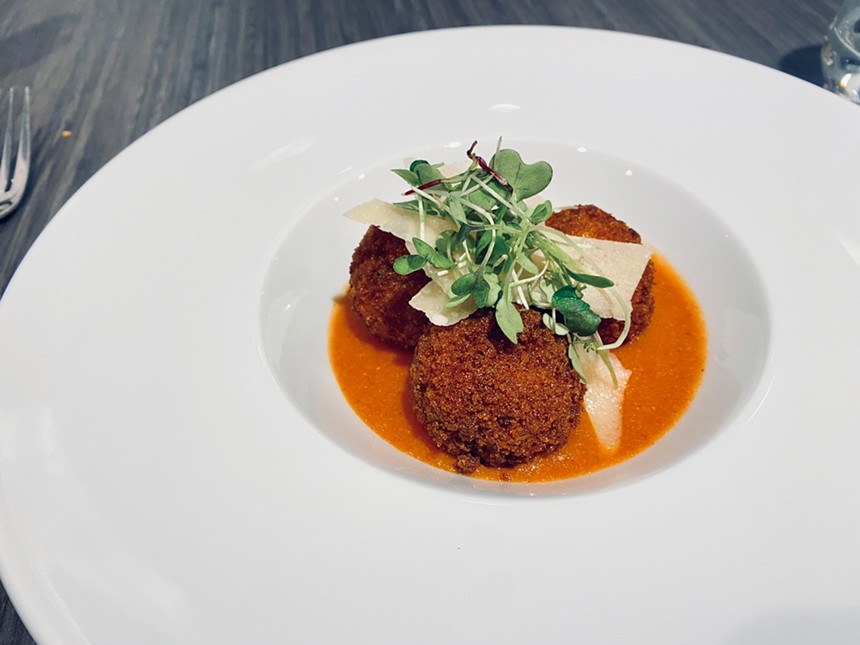 Derry's shrimp and grits are rolled in panko crumbs then fried and over a sausage tomato stew.
Lauren Drewes Daniels
For our final dish, we tried three bigger-than-golf-ball-sized fritters made with grits with jalapeño and shrimp set atop a silky sausage tomato stew. Derry explains she got the idea from leftover grits that had clumped together; she rolled and deep-fried them. A crisp panko crust encases almost-soupy grits with a chunk of shrimp in the middle. They're perfect.

The full menu has just 11 items, but there's a good variety. For starters, there's steak tartare, Gulf crab, beet salad, marinated salmon belly and a wedge salad. A half-dozen entrées include the shrimp and grits, pork chops, a flatiron steak with a short rib marmalade, a mushroom Wellington, redfish and a signature Flagship burger.

If the goal here for American Airlines and the James Beard Foundation was to allow international travelers a taste of the best of what North Texas has to offer, we'd say they landed the plane perfectly. We hate to gush, but there’s literally nothing about Derry we don’t like. If she’s the gate agent of our culinary landscape for international travelers, we’re all better for it.
KEEP THE DALLAS OBSERVER FREE... Since we started the Dallas Observer, it has been defined as the free, independent voice of Dallas, and we'd like to keep it that way. With local media under siege, it's more important than ever for us to rally support behind funding our local journalism. You can help by participating in our "I Support" program, allowing us to keep offering readers access to our incisive coverage of local news, food and culture with no paywalls.
Make a one-time donation today for as little as $1.