Caterina's is a new Italian-American spot in the Stockyards. Kevin Marple
Chef and TV personality Tim Love loves a good angle. His concepts never shoot straight down the middle. His upscale restaurant Lonesome Dove, which recently celebrated its 20th anniversary in the Fort Worth Stockyards, serves exotic wild game dishes like rabbit-rattlesnake sausage and wild boar ribs. His White Elephant Saloon doubles down on Wild West theme with live music, a dance floor and a chili parlor where you can grab a bowl chili and a piece of homemade cornbread for just $6.

Love's latest concept is Caterina's, a classic Italian-American restaurant in the Stockyards on Mule Alley serving house-made pastas and an exclusively Italian wine list. Serves wear crisp white dress shirts and red vests and some staff don white tuxedo jackets. Guests are greeted with a glass of prosecco rosé then led past a display of premium-aged prosciutto di Parma, then past the pasta drying room. Every meal starts with a trio of focaccia and a platter of cured meats with aged Parmigiano Reggiano.

Something you won't see at the restaurant, however, are cell phones. Rigatoni alla vodka at Caterina's.
Kevin Marple
Love's new restaurants provides valet parking for your phone: You can get it if you really need it, but otherwise, it's put away. And that's dividing people as much as controversial topics like Ted Cruz or cilantro. People are either fine with it of vehemently hate it.

A representative of the restaurant explained that as guests arrive they're given a pouch to put their phone in that they take to their table with them, so they get to keep their phones with them, but they are locked away. Some comedians do something similar at live shows.

If a diner needs to use their phone, they can have the bag unlocked and step outside to make a call. But no selfies, photos, scrolling for scores, the weather or news. Certainly no loud phone conversations or distracted texting.

People who haven't even set foot in Fort Worth are writing Google reviews for the restaurant based solely on the fact that Caterina's locks away guests' phones during dinner. Others have dined there and left reviews indicating they had no idea about the cell phone policy before arriving and were not happy to be asked to lock theirs up. The restaurant also requires men to wear a jackets, and some write they didn't like being told to put on a jacket at the door. (Editor's note: the reviews seem to be missing from Google now, perhaps the restaurant flagged those particular ones from diners who hadn't visited.)

Regardless, there is some science behind the effects a phone can have on our brains while eating or otherwise. The University of Texas released a report, "Brain Drain: The Mere Presence of One’s Own Smartphone Reduces Available Cognitive Capacity," in which they found that, yes, phones are a distraction:

"Results from two experiments indicate that even when people are successful at maintaining sustained attention—as when avoiding the temptation to check their phones—the mere presence of these devices reduces available cognitive capacity."


The source of some of the negative reviews might be fact that Caterina's makes no indication of their cell policy or jacket requirement on their website. After a search, we found the only mention of the jacket policy is from other media outlets. If you make reservations, which require a credit card to secure, a confirmation email contains a note about the policy.

Local chef John Tesar has a long history of fine-dining in Dallas and Florida, where his restaurant was recently given a Michelin star. We asked him if phones distract diners at any of his restaurants. "Never," Tesar says. "And it's none of my business. It's their time and their money. I've seen it in other restaurants but not in my restaurants. I've traveled with my kids and walked in and see six people on their cell-phones, but they're all content. They've been with each other all day long, they're on vacation, it's become a modern day distraction."

Caterina's, 128 E. Exchange Ave. (The Stockyards), 4 - 10 p.m. Sunday - Thursday, 4 - 11 p.m. Friday - Saturday
KEEP THE DALLAS OBSERVER FREE... Since we started the Dallas Observer, it has been defined as the free, independent voice of Dallas, and we'd like to keep it that way. With local media under siege, it's more important than ever for us to rally support behind funding our local journalism. You can help by participating in our "I Support" program, allowing us to keep offering readers access to our incisive coverage of local news, food and culture with no paywalls.
Make a one-time donation today for as little as $1. 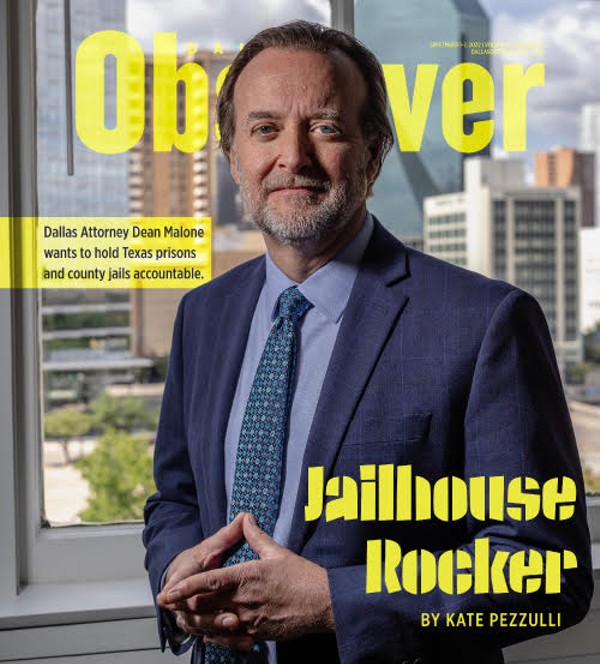