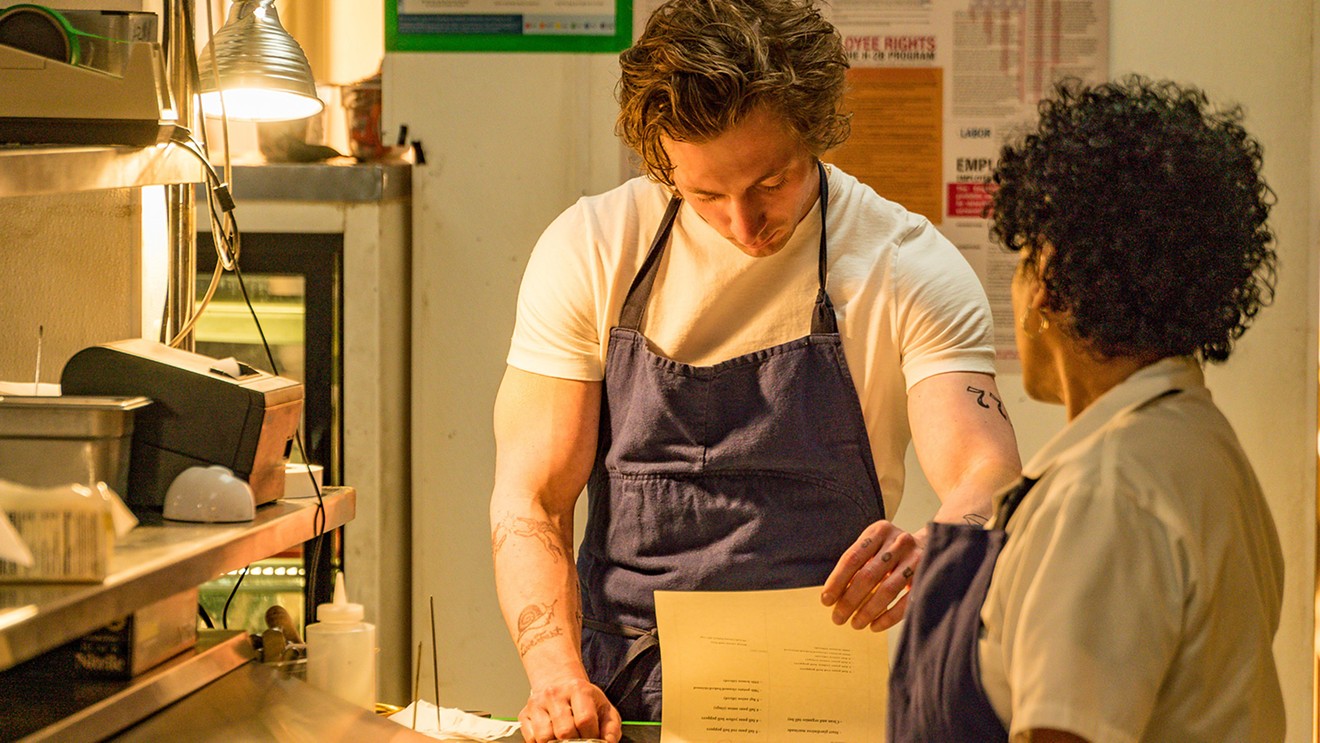 Episode 8, "Braciole" of The Bear Courtesy of FX
Our household loves eating and cooking (especially since the latter leads to the former), and when we’re not out at some hole-in-the-wall dive burger joint or the latest overpriced, upscale fine dining establishment, we’re often planted in front of the TV watching others cook and eat.

There are several shows that feature real-life chefs or gourmands eating and cooking their way to our hearts such as Anthony Bourdain’s "No Reservations," Stanley Tucci’s "Searching for Italy," "Top Chef," and Alton Brown’s "Good Eats." While these can be gripping and entertaining in their own right, it is the fictionalized accounts involving All Things Food that are often the most compelling.

Here are some top picks:

Episodic television allows one a weekly dose (or all-at-once binge via streaming services) of food intrigue. Here are some of our favorites.

"Chef!"
1993–1996, BBC, PBS
This comedy follows the trials and tribulations of chef Gareth Blackstock (Lenny Henry) as he juggles personal and professional forces while trying to run a traditional French cuisine restaurant in the English countryside. Blackstock fits the mold of the stereotypical chef: arrogant, rude, bossy and unyielding, insulting both customers and staff alike who dare to get in his way. We learned a lot while watching this show, including how to make Jamaican Guinness punch.

"The Bear"
2022 – present, Hulu
This show, which recently finished its first season on Hulu, tells the story of Carmy Berzatto (Jeremy Allen White), a young chef from the world of fine dining who returns to Chicago to help run his family’s Italian beef sandwich shop after the death of his older brother. Along with having a great soundtrack, this show captures the ups and downs, the politics and pressures involved in running a small restaurant. It also illustrates strained family dynamics and the fragile balancing act of pursuing one’s dreams while living up to familial obligations. Plus, the beef sandwiches look amazing.

"Party Down"
2009–2010; 2023, Starz
This comedy follows a group of aspiring actors and writers in Los Angeles who toil away as caterers while waiting for their big break in Hollywood. It has an amazing cast including Adam Scott, Lizzy Caplan, Jane Lynch, Megan Mullally and Jennifer Coolidge, as well as numerous guest stars playing the eccentric patrons at their catering gigs. The good news is that it’s been renewed for a new 6-episode season in 2023.

"Whites"
2010, BBC, Amazon Prime
This 30-minute British comedy ran for six episodes in 2010 and can be found on Amazon Prime. It’s the story of Roland White (Alan Davies), an executive chef at a hotel in the English countryside, who has to deal with a sous-chef (who happens to also be his best friend), the restaurant manager, incompetent waitstaff, the hotel owner and the “villain” of the series, an overly ambitious apprentice chef. Co-writer Matt King pulls from his experience working in restaurants, and the cast went through training prior to filming at one of Jamie Oliver’s restaurants.

"Fawlty Towers"
BBC, PBS 1975 Episode, “Gourmet Night”
“Fawlty Towers” is a great from start to finish over its scant 12 episodes, but the “Gourmet Night” episode was a super introduction to “fine dining” when we watched it as kids, and it still holds up. After hiring a new chef, Kurt, the hotel decides to have a gourmet evening once a week in an effort to attract a better class of clientele and get rid of the riffraff, as Basil Fawlty would say. Spoiler alert: things don’t go smoothly, culminating in some great bits of business with duck à l’orange.

"Hannibal"
2013–2015, NBC
This extremely dark crime/horror/thriller followed the interaction and relationship between Hannibal Lecter (Mads Mikkelsen) and FBI profiler Will Graham (Hugh Dancy.) Of course, Lecter is famously a cannibal who has a refined palate and creates beautiful food presentations. We’ll leave it at that.

While TV shows have several episodes that can allow for a slow burn or extended character development, movies have to cut to the chase and distill their message and ingredients like an expertly crafted roux. Here are some of our favorites.

"Big Night"
1996
This movie follows two Italian immigrant brothers who own and operate an Italian restaurant in New Jersey. Primo (Tony Shalhoub) is the older brother, the chef, in the form of the brilliant-but-not-a-people-person master, unyielding and insulted by suggestions to Americanize his food. Secondo (Stanley Tucci) is the younger brother, the restaurant’s manager. In an effort to save their business, they plan and prepare for one extravagant “big night” to get Louis Prima to dine at their restaurant. Things don’t go as planned, but we get to see a lot of great food along the way, most memorably the timpano.

"Babette’s Feast"
1987
At the end of the 19th century, a Danish village takes in French refugee Babette (Stéphane Audran), who serves as a cook of the bland and unimaginative food that a couple of elderly sisters desire. One day Babette wins the lottery and decides to spend her winnings on preparing a lavish meal for the local church, importing exotic ingredients from France to be used in the preparation of the feast. The menu includes courses such as potage à la tortue (turtle soup) and cailles en sarcophagi (quail in puff pastry shells with foie gras), accompanied by fine wines.

"Tampopo"
1985
A truck driver (Tsutomu Yamazaki) stops at a rundown roadside ramen noodle shop run by Tampopo (Nobuko Miyamoto), eventually deciding to stay and help the struggling business to improve and succeed by stealing secrets from competitors and enlisting the chauffeur of a wealthy patron to be their noodle master. This main narrative is interspersed with other stories and flashbacks of a food nature as well: a mother leaving her deathbed to make one last meal for her family, someone expertly ordering a meal at a French restaurant upstaging his snooty superiors and a demonstration of how to properly eat spaghetti.

"Chef"
2014
Jon Favreau is Carl Casper, a Los Angeles chef who leaves his restaurant job after receiving a scathing review from a food critic. He moves to Miami and buys a food truck in an effort to take control of his culinary vision and reclaim his love of cooking his way, by focusing on Cuban sandwiches. You gotta love a story of redemption that has a food critic as a villain.

"The Menu"
2022
A group of elite travelers heads to a remote island, having spent thousands of dollars for the privilege of dining at an exclusive restaurant run by an eccentric yet brilliant celebrity chef, played by Ralph Fiennes. A black comedy heavy with social commentary that can occasionally be laid on a bit too thickly, it’s worth watching for the tasting menu alone, which includes a bread course with no bread, and a serving of s’mores for dessert that got us all fired up.

There are, of course, others not mentioned above, such as “Chocolat,” “Ratatouille” and “Julie & Julia” for movies, and “Bob’s Burgers,” “Julia” and “Sweetbitter” for TV shows. Television and movies will always be drawn to the drama and comedy found in the restaurant world, and we will always be willing to ensconce ourselves on our comfy couch or at a local movie theater to participate, at least vicariously, in this world. At the very least, it’s a lot lower in calories and in cost than the real thing.
KEEP THE DALLAS OBSERVER FREE... Since we started the Dallas Observer, it has been defined as the free, independent voice of Dallas, and we'd like to keep it that way. With local media under siege, it's more important than ever for us to rally support behind funding our local journalism. You can help by participating in our "I Support" program, allowing us to keep offering readers access to our incisive coverage of local news, food and culture with no paywalls.
Make a one-time donation today for as little as $1.