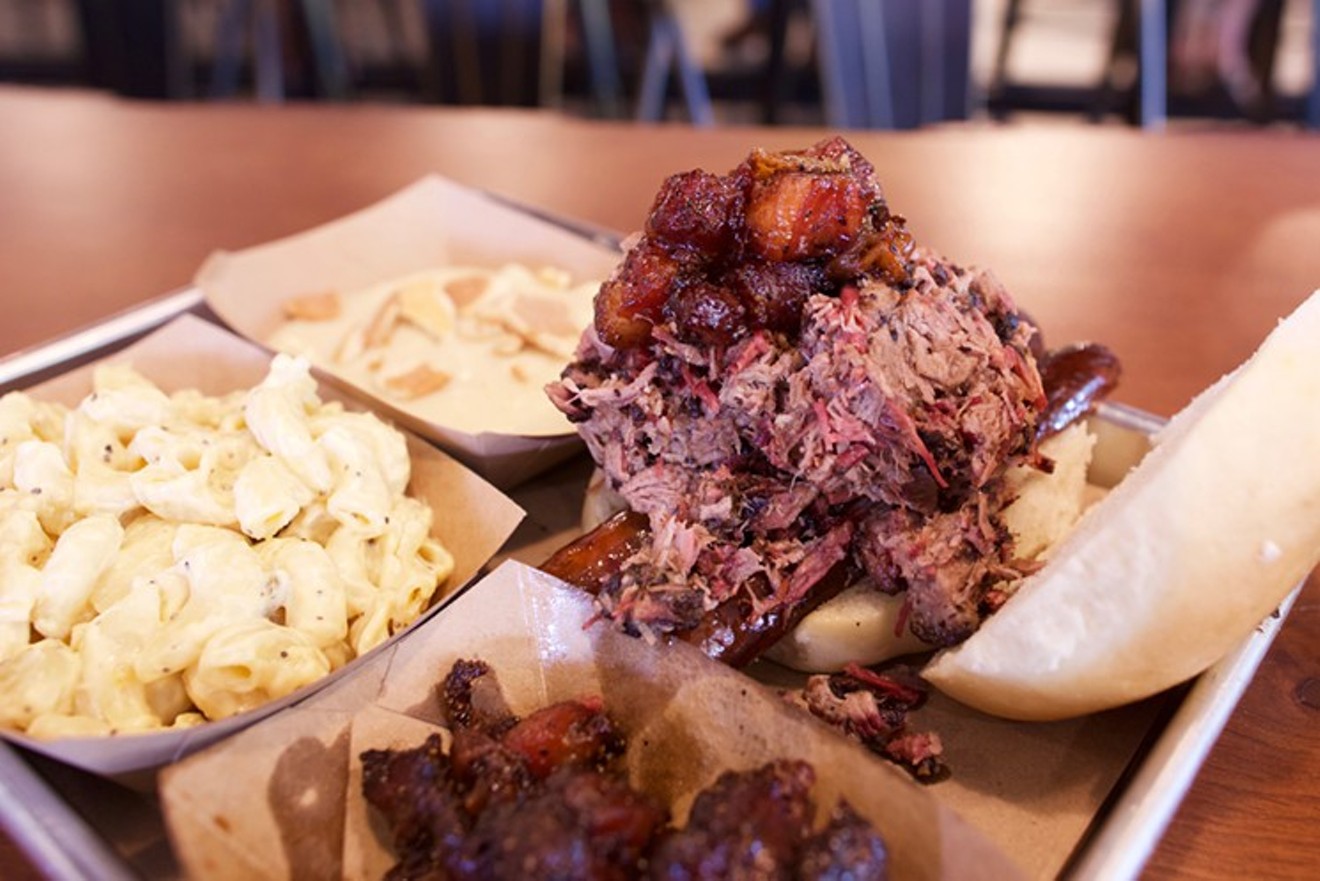 The BBQ Snob sandwich. Heim BBQ is synonymous with Fort Worth barbecue, but this summer, Dallasites won't have to drive nearly as long to get it. Chris Wolfgang

For Dallasites who relish Heim BBQ's delicious smoky fare, but loathe driving all the way to Fort Worth to get it, we have some glorious news: Heim just announced plans to open a new location in Dallas this summer. 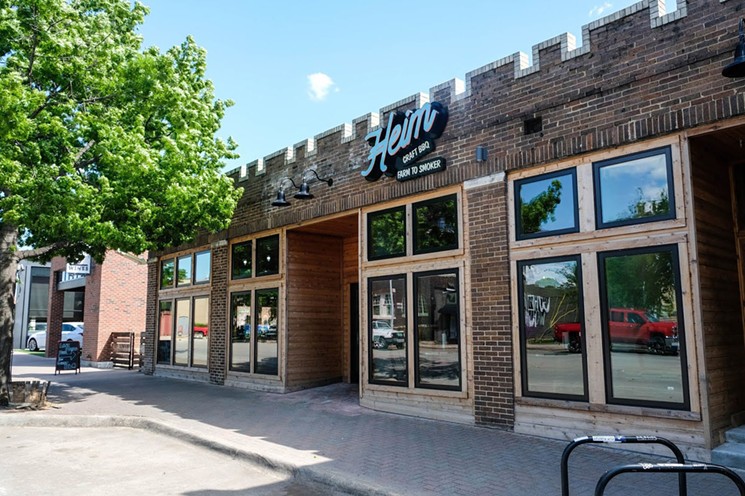 The original Heim BBQ brick-and-mortar location on Magnolia Avenue in Fort Worth. A new spot comes to Dallas this summer.
courtesy Heim BBQ
Heim's third location will occupy the former Mockingbird Diner spot at 3130 W. Mockingbird Lane, just outside of Dallas Love Field, and is expected to open in June.

For travelers who have strayed far from Texas barbecue, the new Heim spot will be an ideal place to normalize one's barbecue taste buds right after they land.

Proprietors Emma and Travis Heim have known for some time that a lot of people trek from Dallas for their barbecue, but the chance to open a restaurant on the Dallas side of town only recently materialized. 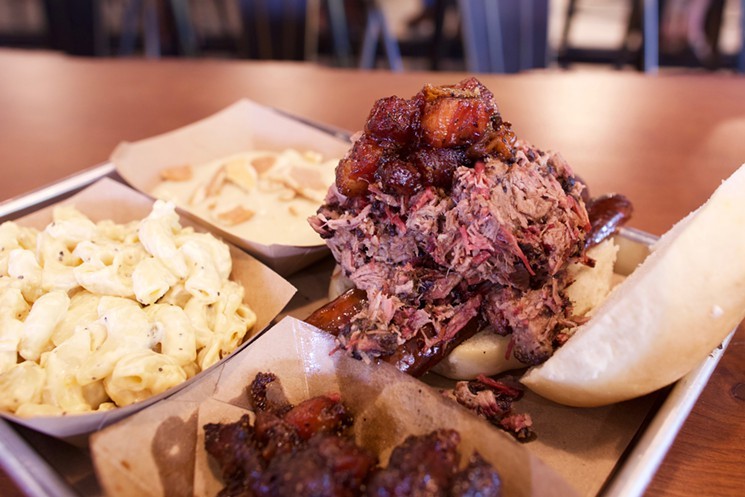 The BBQ Snob sandwich. Heim BBQ is synonymous with Fort Worth barbecue, but this summer, Dallasites won't have to drive nearly as long to get it.
Chris Wolfgang
"Since we opened our food truck, we’ve had a lot of guests drive all the way from the Dallas area to visit, so we’ve always thought it would be great to open a spot in Dallas but never really pursued it," Travis says. "The owners of the Mockingbird building reached out to us, and once Emma and I visited and spoke with them, we knew we couldn’t pass up such an awesome space."

Only half kidding, we asked Travis if part of the deal was to pay his rent in bacon burnt ends, which in our humble opinion, would be the perfect currency if not for everyone's perpetually sticky fingers.

"I guess technically all my rents are paid in bacon burnt ends," he says, laughing. "Our meat supplier informed me in December that we had officially bought over 1,000,000 pounds of meat through them; that’s a lot of burnt ends."

We shouldn't be surprised. Since the Heims opened a food truck in 2015, their barbecue has become synonymous with Fort Worth's burgeoning barbecue scene, and landed in Texas Monthly's Top 50 barbecue joints. However, the success of Heim BBQ is something that never ceases to amaze the owners. 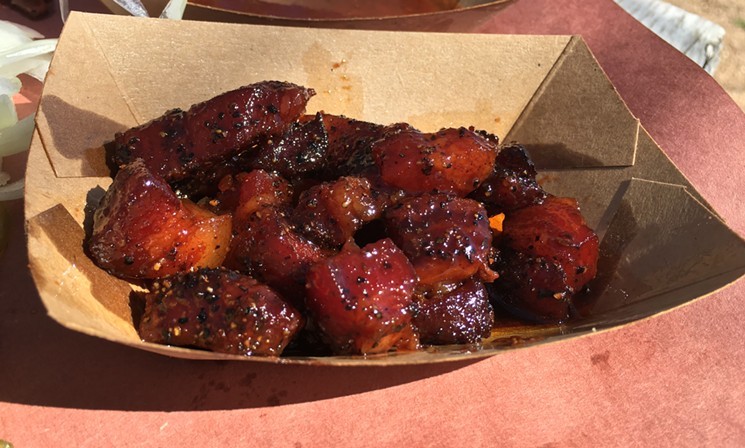 Heim's bacon burnt ends were photographed when this Fort Worth restaurant was just a barbecue truck parked outside a Cowtown bar.
Beth Rankin
"I never even thought we’d be lucky enough to open one restaurant, much less three, plus a food truck and catering kitchen," Travis says. "This opportunity to open in Dallas gives us a chance to expand our customer base and hopefully be a great spot for the local community to come hang out and enjoy some great barbecue."

When they opened the second spot in Fort Worth's River District, the venue's large kitchen and smokehouse allowed them to expand the menu. Travis tells us we can expect similar bonuses for the Dallas location's menu to make each location a little unique but still retain the Heim flavor.

That's right — the couple that put bacon burnt ends on the barbecue map are bringing them to Dallas, and for a brief moment, all feels right with the world. June can't get here quick enough.

Heim BBQ, 3130 W. Mockingbird Lane (Love Field). Expected to open in June.
KEEP THE DALLAS OBSERVER FREE... Since we started the Dallas Observer, it has been defined as the free, independent voice of Dallas, and we'd like to keep it that way. With local media under siege, it's more important than ever for us to rally support behind funding our local journalism. You can help by participating in our "I Support" program, allowing us to keep offering readers access to our incisive coverage of local news, food and culture with no paywalls.
Make a one-time donation today for as little as $1.