Evan Grant the burger, not the baseball beat writer, from Rodeo Goat Courtesy of Rodeo Goat
Last week I tweeted my regret about the $24 burger at Harper’s, a new restaurant in Deep Ellum. What I regretted, specifically, was how good it sounds and how much I want to spend $24 on a burger. It has sharp, aged comté cheese! Fried shallots! A mustard aioli that would probably be better without the truffles in it! Shut up and take my money.

Then Twitter user Arjun Ratnayake gave me a harsh reminder: Spending $24 on that burger may be acceptable, but the side order of fries is an additional $12.

And that — the thought of $12 fries — is what sent me down a rabbit hole of menus from across Dallas, in search of some form of enlightenment about the economics of burgerdom. Here are some of the fascinating, or maybe pointless, things I’ve learned. 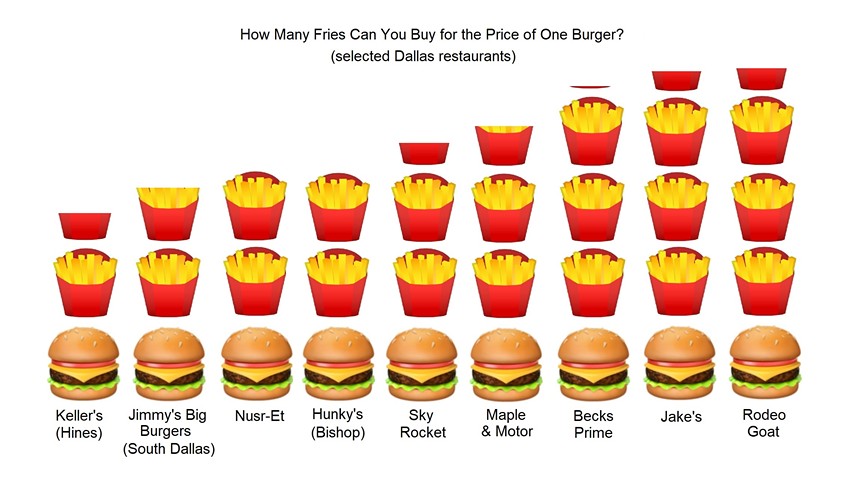 Yes, I used the Apple burger emoji and the Google fry emoji. If you noticed this, you're a great big nerd.
Brian Reinhart
One Burger Costs About the Same as Two and a Half Fries

The first thing that caught my attention about Harper’s was that for the price of a burger, you could only get two orders of fries. That didn’t seem right. After all, burgers have meat, vegetables, condiments and bread, and fries just have potatoes, oil and salt.

But Harper’s actually falls well within the normal burger-to-fries ratio. In fact, it’s the same ratio employed by Hunky’s Old-Fashioned Burgers, where a plain hamburger is $5.50 and fries are $2.75. (For any menu with multiple choices, I chose a plain, single hamburger as my reference point.)


You might be wondering whether it’s better to have an expensive burger and cheap fries or vice versa. Well, I’m wondering that too. The point could be argued both ways.

Take two restaurants at the extreme ends: Keller’s Drive-In and Rodeo Goat. At Keller’s, you could only buy 1.4 orders of fries with your burger money. Are the fries overpriced? Of course not; the burger’s only $2.90. At Rodeo Goat, though, you could grab more than three trays of fries for the price of one sandwich. But even their basic offering is a big burger with cheese.

Across the board, the average restaurant charges about two and a half times more for its burger than its fries. In other words, on your average lunch trip out, fries represent about 29% of your bill. 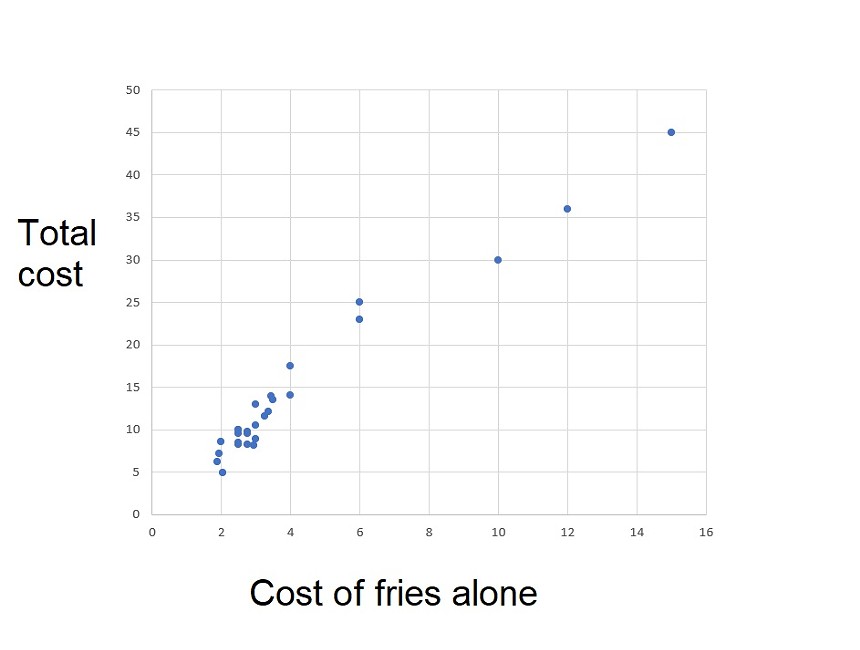 The cost of fries alone charted against the total cost of a meal. At the low end, most fries cost very similar amounts of money, even if your total bill can end up quite different.
Brian Reinhart
Spending More Than $6 on Fries Is Pretty Rare

There are a lot of burgers in town at a lot of price points, but the cost of fries is close to fixed. In my focus group of 27 restaurants which charge separately for burgers and fries, 20 have fries for below $4. In this way, Harper’s is most definitely an outlier, with the second-most expensive fries I could find, trailing only the palace of exorbitance that is Nusr-Et.

Look at some of those vertical trails of dots, and you can’t help drawing direct comparisons between businesses. Take Keller’s and Jake’s: Keller’s may charge $0.06 more for fries, but Jake’s charges $3.69 more for its burger. Desert Racer and Rodeo Goat both have a $10 burger, but at Desert Racer, you’ll add an extra buck for fries.

The two $6 fry orders are from different restaurants in the same national chain: R+D Kitchen and Honor Bar, both part of the Hillstone group. Honor Bar’s burger costs $2 more, maybe because it pays Highland Park Village rent. Dallas also has a location of the original Hillstone brand — and its burger costs just about the same as the other two, but fries are included. Huh.

Speaking of fries included, we should discuss that, too.

Burgers More Than $15 Usually Include Fries

Intrigued by the examples of Harper’s and Nusr-Et, I started looking around for more fancy-pants burgers to see how expensive they get when you make them a combo. (Please walk into Nusr-Et and ask them to “make it a combo.” I want to know how they react.)

But ultimately I only found one more example: the rooftop restaurant at Restoration Hardware ($20 burger, $10 fries). Almost every other bourgeois burger comes with a side dish included, and often you can choose from several sides. The $18 burger at Knife includes fries, as does the $17 daily special burger at Parigi, the $18 beer mustard burger at CBD Provisions, the $20 wagyu burger at Up on Knox, the $19 “primo burger” at Neighborhood Services, the $22 “rattlesnake burger” at Fearing’s and the $17 burger with triple-cooked fries at Elm & Good.

It makes sense, of course. You pay more, you expect an extra feature or two. From my studies, it appears that $15 is the cutoff where people can expect fries included — most of the time.

In many cases — like Keller’s — I started with the assumption of a plain hamburger. But come on: We want cheese, and a second patty or bacon or both. Why not add double meat and cheese for only $1.30?

Well, unless you’re at Restoration Hardware, where the bacon costs $6 by itself. As a proportion that’s reasonable — it’s a 30% surcharge, exactly the same as the $3 bacon on a $10 burger at Desert Racer — but hey, it’s still $6 for bacon. At spots like Porky’s and Olive Burger, there’s a whole sandwich for less.

The best spot to order extras? Rodeo Goat, where the base no-cheese burger is $10 but fully-loaded options mostly range from $11 to $12. For just 15% more than the regular old-style cheeseburger, you can add bacon, fried onions, jalapeños, chutney and barbecue sauce (the “Brad Sham”).

Another restaurant with good deals on add-ons is one of my semi-regular haunts, Jimmy’s Big Burgers in far south Dallas (no relation to the Jimmy’s in Plano). The namesake burger is only $1.25 more (24% more) than a plain burger, and for that tiny upcharge, you get two kinds of cheese and grilled onions, jalapeños and mushrooms. Sides are even better: You can switch to seriously good curly fries for no added charge.

I’ll be honest. I learned almost nothing from this exercise. It’s not uncommon for fries to cost as much as half of the burger price, it’s not common to need to order sides for a $15 burger and Hillstone is a better deal than Honor Bar. That’s about it.

But I got to make a cool chart with emojis. No more justification is needed.
KEEP THE DALLAS OBSERVER FREE... Since we started the Dallas Observer, it has been defined as the free, independent voice of Dallas, and we'd like to keep it that way. With local media under siege, it's more important than ever for us to rally support behind funding our local journalism. You can help by participating in our "I Support" program, allowing us to keep offering readers access to our incisive coverage of local news, food and culture with no paywalls.
Make a one-time donation today for as little as $1.