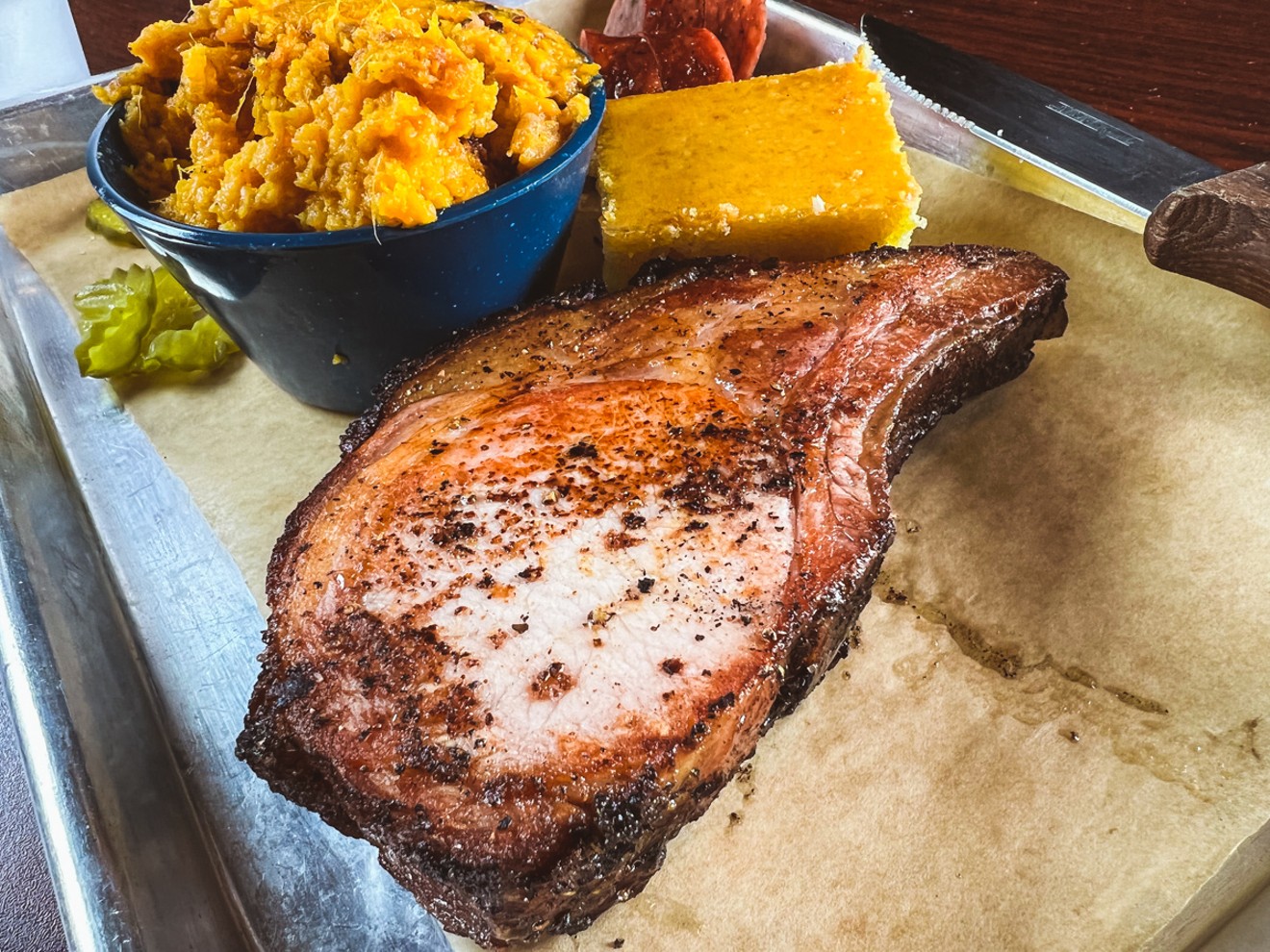 Slow Bone's smoked pork chop will cure what ails you, as long as you're ailing on Sunday or Monday. Chris Wolfgang
A handful of Thursdays ago, the Observer's food editor convinced me to join her and Texas Monthly's barbecue editor Daniel Vaughn at TMBBQ Club's "Meat Up" series at Terry Black's BBQ in Deep Ellum. We consider ourselves pretty plugged in to the goings-on in Dallas-Fort Worth barbecue, but there's no denying that Vaughn and his team do a phenomenal job covering barbecue across all of Texas.

With all that barbecue knowledge at the ready, spending a little time talking shop with Vaughn is a joy. But while boss-lady Lauren Daniels was asking pointed questions about how much barbecue he eats in a given day (a lot), Vaughn reminded us of a barbecue bite of note right in our backyard that we've been meaning to try: the smoked pork chop special served two days a week at Slow Bone.

The pork chop isn't a new item from Jeffery Hobbs and the team at Slow Bone; it has been in the rotation of daily specials at the Design District barbecue destination for over three years. Think of it as a testament to all of the area's great barbecue that we want to try, combined with the pork chop's limited weekly availably, rather than any intentional ignorance on our part. But a recent Monday, our schedule freed up, and we dropped into Slow Bone just after noon to rectify our oversight.

The line was near nonexistent on this visit, and it took just a few minutes to prep a chop for our tray. What you don't see is the weeks of work that Hobbs and his team put in to bringing a chop to service. Although he's been a part of Slow Bone for going on eight years, Hobbs comes from a fine-dining background, and we get the feeling he loves digging deep into his bag of culinary tricks for dishes like this. 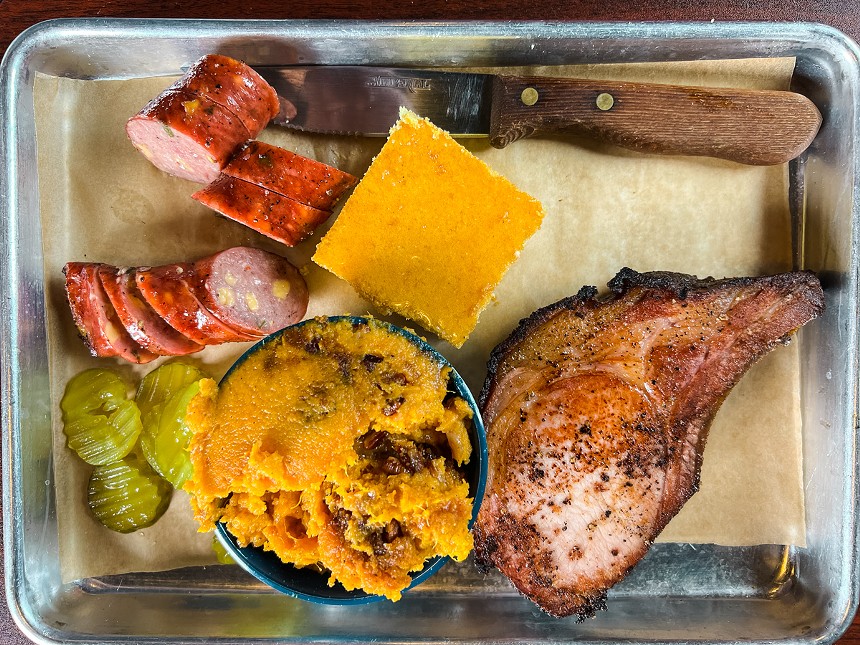 The pork chop was our mission, but we can't go to Slow Bone and not get something barbecue related, or one of their stellar sides.
Chris Wolfgang
Long before we walked in on this Monday, a full rack of bone-in pork loin chops was massaged with a healthy rub of salt, pepper and spices, then left to brine in Slow Bone's walk in refrigerator for around two weeks. In that time, a pellicle forms around the pork loin as moisture dries from the surface. It's then off to Miss Jessie, Slow Bone's smoker, for a couple of hours until the pork hits around 125 degrees. The pork then gets vacuum-sealed and heads back to the walk-in to chill for another week or so. On the morning of service, whole loins are loaded back in the smoker to come up to serving temp.

When you order a chop, it's sliced right off the loin, then is sent over to the flat top behind the cutting line to get a quick crisp up of the edges before making its way to your tray. The part you see is just a few minutes, but it's been as long as three weeks in making.

The results are stunning in both looks and taste. A rather pedestrian pork chop is pretty bland on the inside, but Slow Bone's brining and smoking process has infused each bite of pork with a salty and smoky flavor profile like no other pork bite this side of bacon. The texture of each bite hits differently too, more dense than a regular chop, but still juicy and tender. And each bone-in chop looks like a work of art, glistening in its beauty.

There must be some financial chicanery going on at Slow Bone, because this culinary gem set us back just $13.50 for a 12-ounce chop, which is a value of near criminal proportions. If Dallas police wanted to charge us with stealing, we'd make a quick nolo contendere plea and hope we'd be released on a Sunday or Monday so we could get back in line at Slow Bone and cement our repeat-offender status. And lest one forget that we were at Slow Bone, we ponied up four bucks for a side of sweet potato praline without hesitation and rounded our lunch with a link of jalapeño-cheddar sausage because our old habits are just that hard to shake.

Slow Bone is still a seven-day-a-week operation, but the pork chop is only available on Sundays and Mondays. You have your orders. You know what to do.

Slow Bone, 2234 Irving Blvd. (Design District) Open daily, 11 a.m. - 3 p.m.
KEEP THE DALLAS OBSERVER FREE... Since we started the Dallas Observer, it has been defined as the free, independent voice of Dallas, and we'd like to keep it that way. With local media under siege, it's more important than ever for us to rally support behind funding our local journalism. You can help by participating in our "I Support" program, allowing us to keep offering readers access to our incisive coverage of local news, food and culture with no paywalls.
Make a one-time donation today for as little as $1.