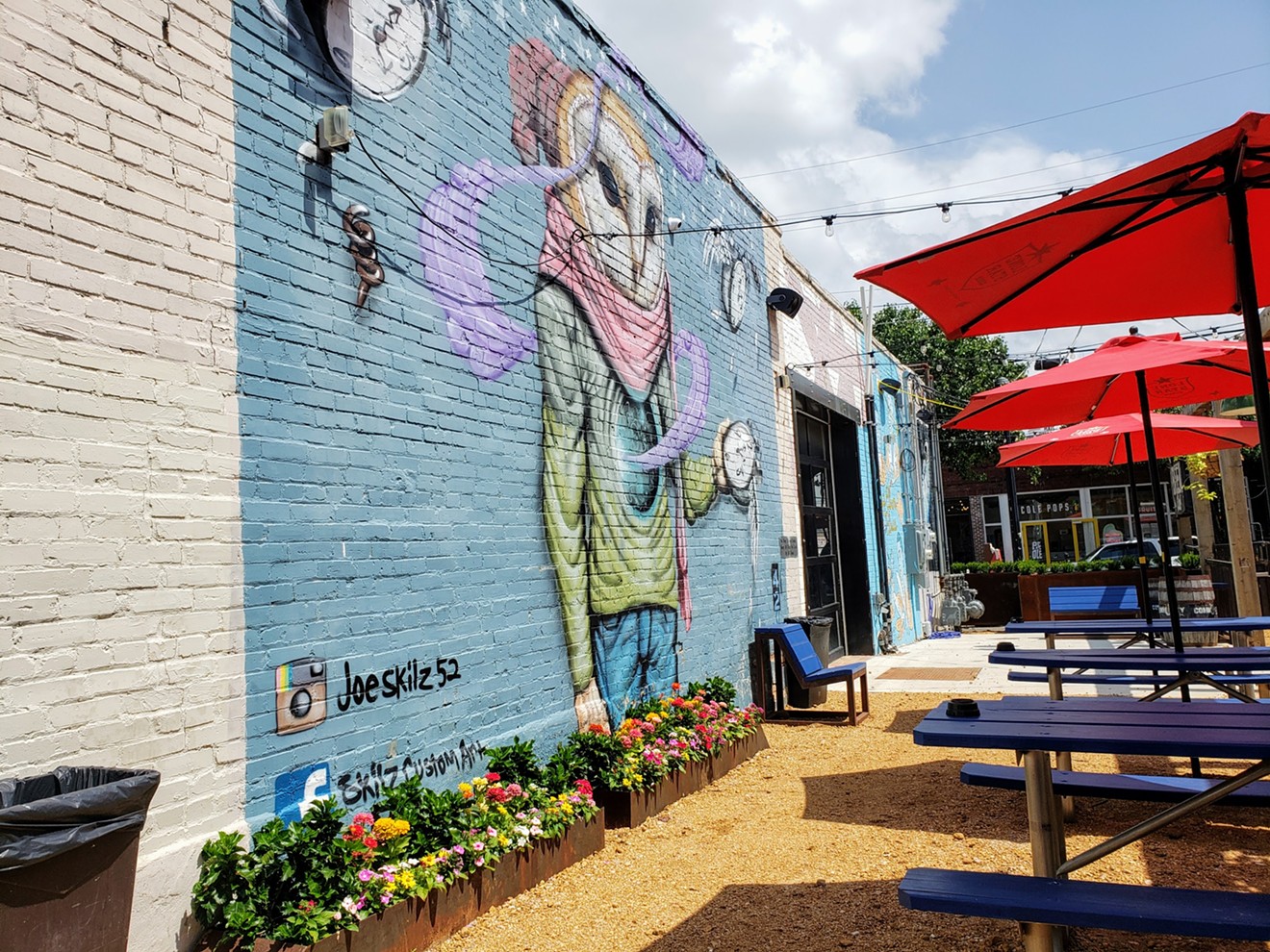 Artist @joeskilz was tapped by 3 Nations Brewing to create beer can art. Kristina Rowe
What do a mural artist, a graphic artist specializing in user experience and a brewery co-owner have in common? The simple answer is that they’re designing art for the beer can labels of Dallas-made beers.

On a deeper level, they’re merging two things we already love—art and beer. And although Joe Skilz, Cristi Brinkman and Molly Reynolds approach their art differently, they’re all raising the profile of the Dallas craft beer industry with their work. 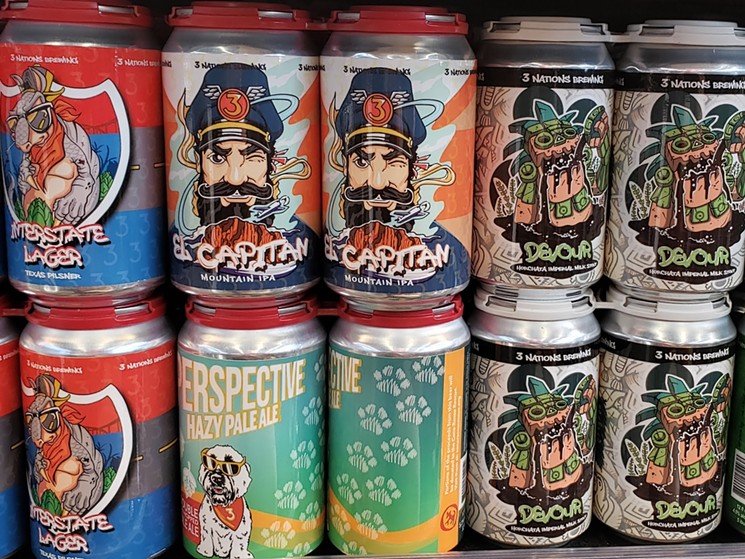 Kristina Rowe
You’ve undoubtedly seen a Joe Skilz mural in Deep Ellum, so you might do a double-take when you see his art in a grocery store beer aisle. That all came about when 3 Nations Brewing decided to take a new approach to their beer can design.

The brewery reached out to local mural artists, looking for a way to bring something exciting and recognizable to the design, and ended up selecting the artist best known as “Skilz” for the project.

All of the brewery’s core beers now feature a character created by Skilz on the can. Each one is unique and was designed based on the artist’s impressions of the beer when he drank it. While each design is distinct, when combined with a limited color palette and a distinctive, playful font on the can, the recognizable art helps solidify the brand consistency 3 Nations was looking for.

Skilz and his girlfriend, Gina, also known as “Pkin,” share their art on social media and you can see more of their work at Art Loot 52. 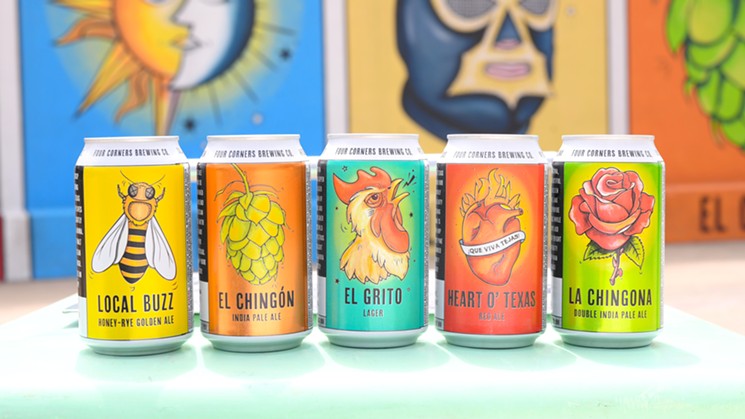 Four Corner's branding is based on lotería cards.
Cristi Brinkman
It’s said that “luck is what happens when preparation meets opportunity,” and when Four Corners Brewing “met” Cristi Brinkman, something very lucky happened. The artist's work has been instrumental in Four Corners' branding from the beginning, and the award-winning labels may be the most recognizable in Dallas' craft beer industry.

After completing her degree in computer graphics design communication at Texas Tech, Brinkman took an internship in New York with world-renowned Milton Glaser, best known for his ‘I Love New York’ logo.

After about five years, she was ready to return home to Dallas. A friend told her about an opportunity at Four Corners, where her illustration skills, packaging design background and understanding of user experience were a perfect fit.

At the time, the Dallas craft beer industry was just getting started, and the local beer aisle in stores did nothing to help customers understand what it was about. With most beers sold in brown glass bottles, “it was in dire need of some color and vibrancy,” Brinkman says.

“Craft beer was so foreign to people,” Brinkman says, and when the brewery decided to sell beer in cans, she set out to design something appealing as well as educational.

“Packaging is about user experience. It’s exactly the same thing,” Brinkman says. “The messaging needs to be clear, but in a beautiful way too. That’s what designers are supposed to do.”

She worked with brewery founder George Esquivel to create the weathervane rooster logo as well as the instantly recognizable lotería card-inspired designs.

“Each beer, like each card, has its own story,” Brinkman says. She compares the coherent theme with unique individual designs to having relatives. “As a family, you look similar, but each person looks different.” 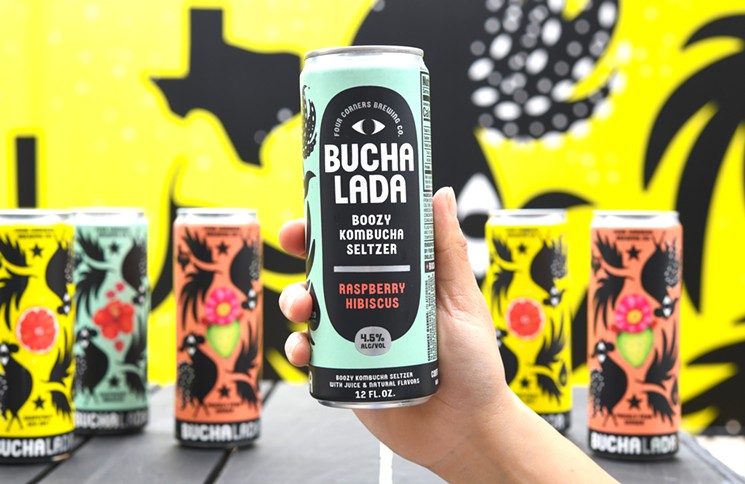 The new Buchalada cans at Four Corners connect to the original brand but also tell their own story.
Cristi Brinkman
In March, Four Corners expanded its family with a new line of boozy kombucha seltzers called Buchalada. For Brinkman, this meant showing that Four Corners is not just a beer company, but a brewing company with new designs that told their own story while keeping the connection with the established brewery brand.

“We decided to bring over the rooster concept, with the eye looking out to invite another aspect,” Brinkman says. “We wanted to convey authenticity, but we were also going for a fun vibe.”

Brinkman also has her own illustration and design studio. Follow her Instagram page to see her woodwork and other creative endeavors. 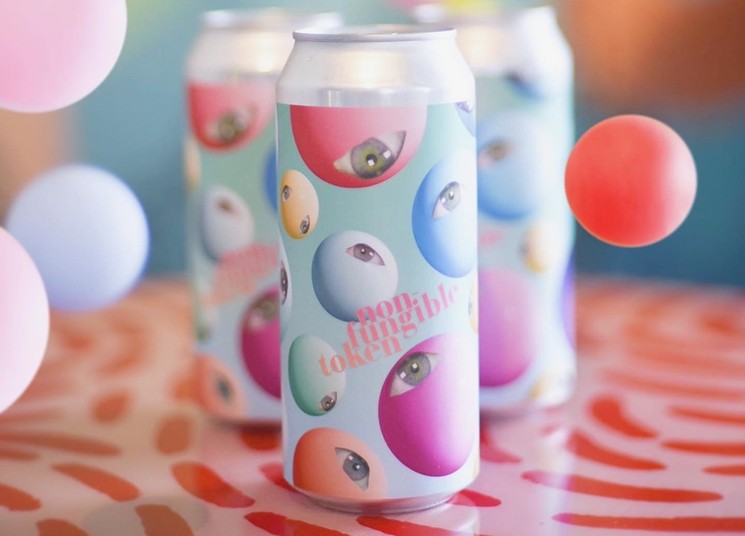 Celestial Beerworks/Sara Morton
Because Celestial Beerworks focuses on selling fresh beer onsite, you won’t see co-owner Molly Reynolds’ beer can designs in the grocery store. But her artwork is an essential part of the brand she and her husband, Matt, created when they opened their brewery in 2019.

Their passion for art and astronomy can be found in their taproom and on their beer cans. Molly connects the themes by aligning imagery and keeping the colors cohesive.

"It’s super important to us to bring the same atmosphere and experience to those inside of our taproom as well as those sipping our beers at home. Just like we make sure the beer inside is consistent with that on tap, I wanted to make sure that the designs are similar to those in our physical space. This has been especially important this year with so many people unable to venture out and enjoy time in local businesses,” Molly says.

With two or three beer releases every week, Molly is constantly creating label concepts. Beer names and concepts have come from the brewery’s production team and startenders (a "star" bartender) as well as from customers and through Celestial’s social media.

“We've done interactive polls in which peoples' answers have shown up in our imagery, and raffles in which the winner got to choose who he wanted on the can,” Molly says. “We held a design contest for local artists to have a chance to showcase their work on our cans. One of our startenders and our photographer, Sara Morton, creates cyanotypes, and it was really fun to be able to put one of her pieces on one of our cans.” 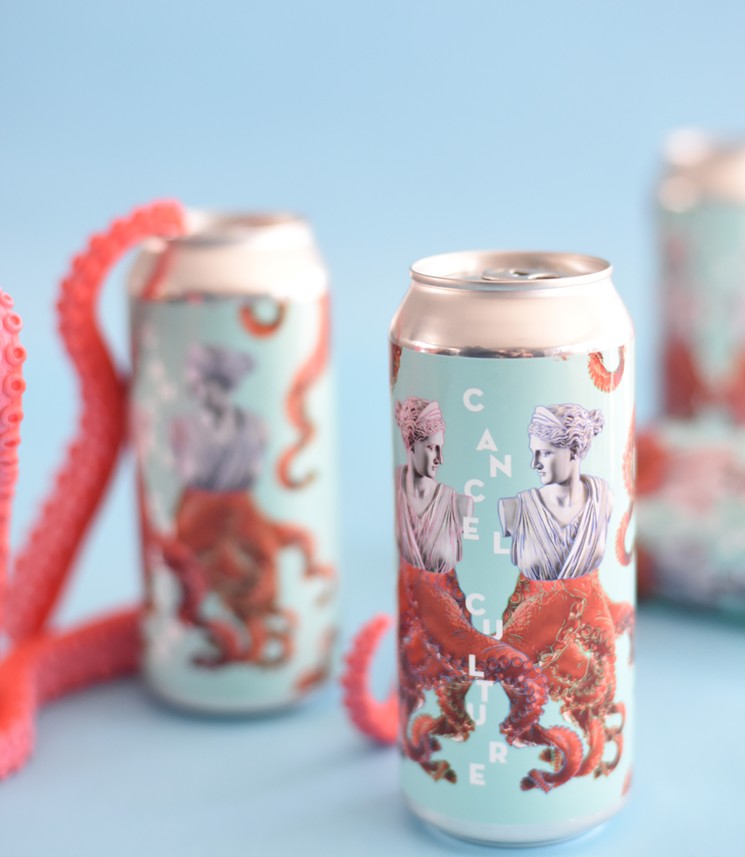 Cancel Culture from Celestial
Celestial Beerworks/Sara Morton
Molly also brings of-the-moment ideas to life on the cans. The brewery held a roundtable discussion on cancel culture and launched a beer of the same name with a hybrid of a female octopus and ancient bust. Another beer, Serenity Now, paid tribute to the late Jerry Stiller right after he passed away.

In April, she created a non-fungible token (NFT) to go with a beer of the same name. Think doge token, Elon Musk on Saturday Night Live or perhaps even Kevin Costner in a cornfield in Iowa. It's elusive and timely. Maybe it's real, or maybe it's all imagination.

“It has been incredibly interesting and pretty confusing trying to navigate the NFT world,” Molly says. “This space is so integral for modern graphic designers and creators and it only made sense to start uploading the constant designs being pumped out of our taproom and onto our cans. The label has a QR code that takes the drinker straight to the digital image. I thought this would be a compelling way to open up the general public to this world of digital art ownership.”

Molly loves to connect with people and says that using her art to do that is her dream job. “We couldn't be luckier to be in the ever-growing DFW beer scene,” she says. "We have found it to be one with incredibly open, loving, experimental people.”
KEEP THE DALLAS OBSERVER FREE... Since we started the Dallas Observer, it has been defined as the free, independent voice of Dallas, and we'd like to keep it that way. With local media under siege, it's more important than ever for us to rally support behind funding our local journalism. You can help by participating in our "I Support" program, allowing us to keep offering readers access to our incisive coverage of local news, food and culture with no paywalls.
Make a one-time donation today for as little as $1.