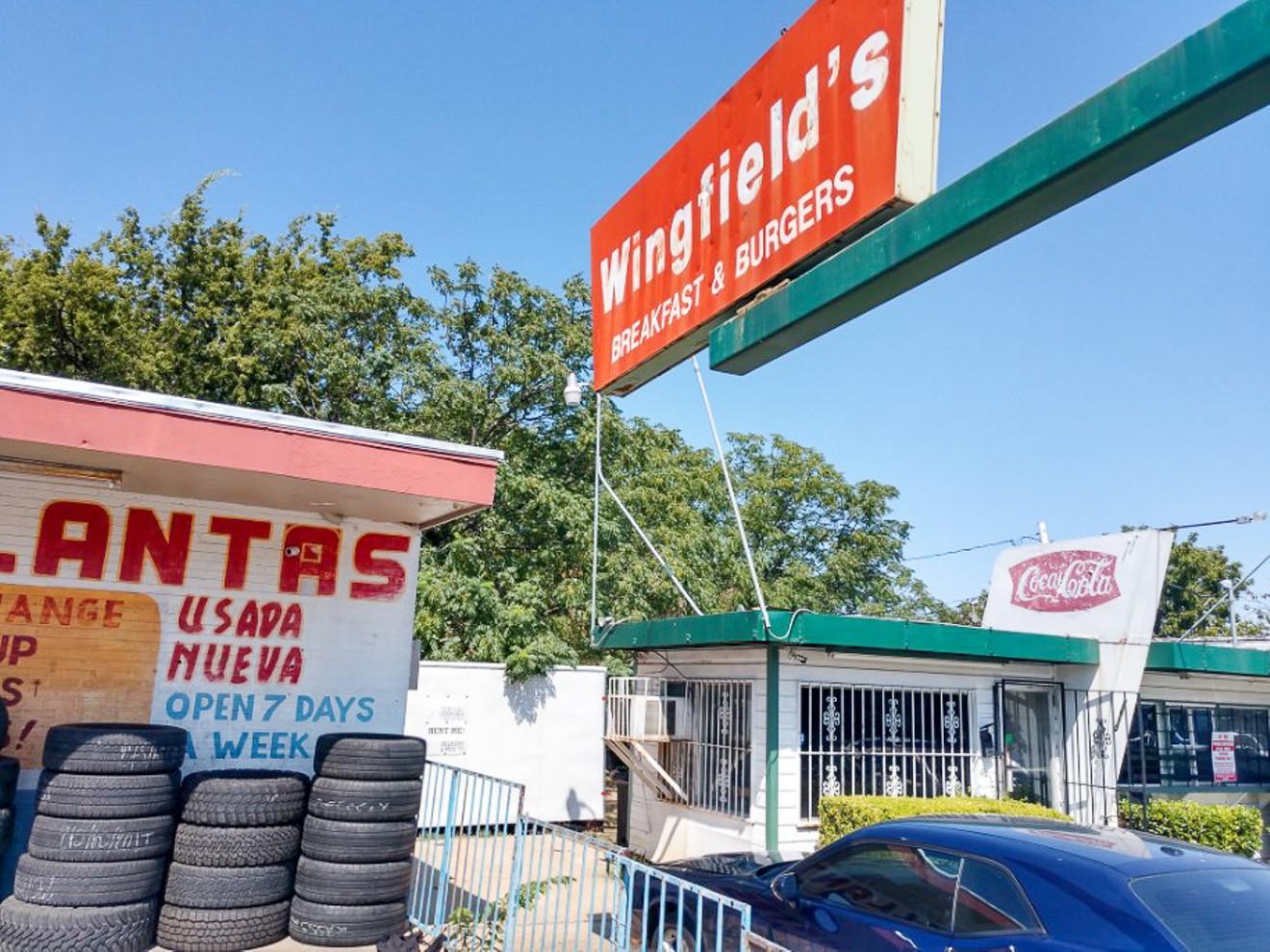 Don't let this modest storefront on South Beckley Avenue fool you. Inside are some of the best burgers in town. Philip Kingston
Former Dallas City Council member Philip Kingston knows food, likes the Observer and has been known to voice strong opinions on rare occasions. So when he offered to write about food for us, we said hell yeah.

In his seminal interview with me known as “Hot Dish,” my colleague Brian Reinhart tried to trick me into saying bad things about restaurants in other City Council districts. I didn’t take the bait, but it did make me realize I don’t eat in southern Dallas nearly enough; so I’m going to try to correct that. Also, Hot Dish is my new nickname.

What better place to start than with a place that simply can’t get too much attention: Wingfield’s Burgers and Breakfast.

(City Council member) Adam Medrano introduced me to this place years ago. Everyone likes Adam, so I invited him along. And since celebrity ride-share driver TC Fleming has recently written about food for the Observer, I asked him to drive me over there. 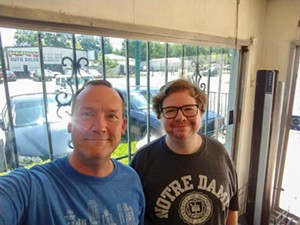 The small interior is just large enough for an awkward, two-person selfie. (Pictured here are Philip Kingston and TC Fleming.)
Philip Kingston
I am pleased to report that it’s still great. Wingfield’s (namesake of founder Richard Wingfield) schtick is to start with a half-pound ball of ground beef, nicely seasoned, then griddled under weights until it emerges as one of the city’s most appealing and most intimidating patties. Adam claims to have eaten a double one time. I don’t believe him.

Wingfield’s is appropriately tight-lipped about its ground beef mixture and the spices, so I’m giving you my best guess: 80%  lean chuck with powdered onion and garlic, black pepper, salt (a lot) and red wine vinegar. The owners are now laughing, probably.

Whatever it is, it’s magic. The burger is objectively too big for humans, but it compels you to finish it. Co-owner Tony Woods says the difference is that they “give a damn about flavor.” 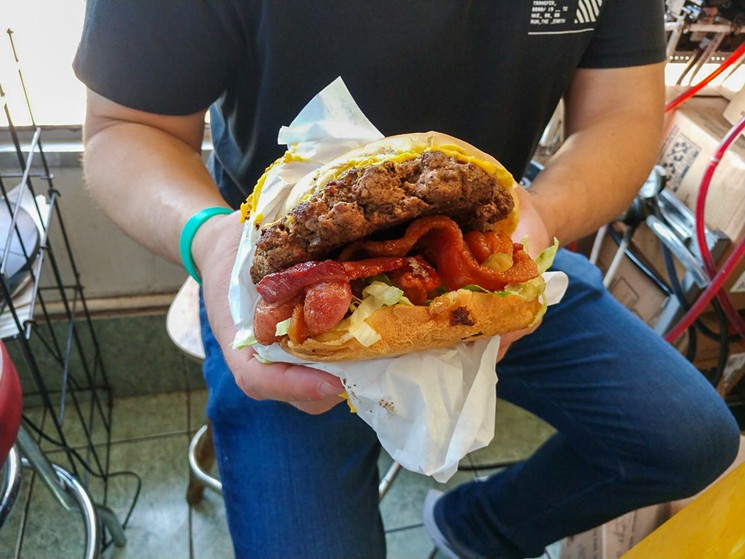 The burger at Wingfield's, unlike anything else you'll get in Dallas.
Philip Kingston
They have a process they follow, and they won’t be rushed. Even with no line it’s not uncommon to wait 25 minutes for a burger. Nor are these burgers inexpensive, starting at $10 for a single and $15 for a double. Per calorie, it’s still a bargain. And do not think for a minute you are going to play Wingfield’s by ordering that lemonade with no ice.

So with two pro food critics and the city’s mayor pro tem, consensus is that it’s one of the city’s best burgers. You get to a tier at the top where The Grape Restaurant’s or Boulevardier’s burger can be your favorite, but you can’t fault someone for saying Wingfield’s is the best in town.

Co-owner Corey Maples says their reputation earned over more than 30 years is the reason they see diverse customers from across the city trundle down to a poorly maintained strip of South Beckley Avenue to stand in line at a storefront without air conditioning to dine in their cars in the parking lot. That diversity was evident during our visit.

So why not expand their store to create a dine-in concept? First, they don’t need to economically. The storefront does fine. Also that’s partly due to the other channels the owners are pursuing.

Their booth at the State Fair of Texas is enormously successful, and a few years ago they bought a food truck, which would probably be more successful if they could ever get off the waiting list for Klyde Warren Park, where they’ve been stuck for years. 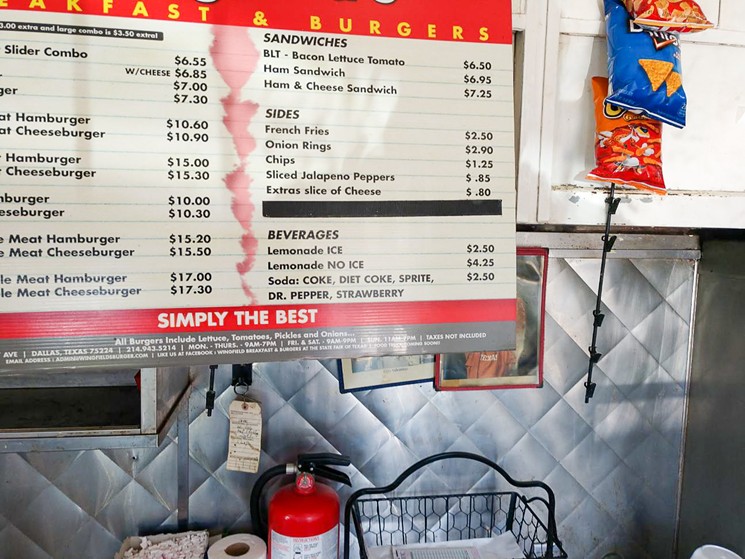 "Simply the Best." They're not wrong.
Philip Kingston
But I’m not sure I’d risk expansion money on South Beckley if I owned a business there. TC and I surveyed the surrounding neighborhoods and found well-kept, middle-class housing. Beckley Saner Park down the street is in great shape and has a brand-new sprayground.

But South Beckley itself is awful. The paving is collapsing. Woods says their patrons are scared to back out of the parking lot because of the speeds. There are no pedestrian features at all. To my eye, this looks exactly like the kind of neighborhood commercial corridor the city should invest in by fixing the infrastructure.

When we did that on North Bishop and on Greenville avenues, the private sector quickly responded with big investments of its own. South Beckley does not appear on the current bond-funded repair schedule.

Strategic infrastructure investments in opportunity corridors such as South Beckley were supposed to be a key feature of the city’s long-promised Economic Development Comprehensive Plan, which was due in draft in December 2018 and has still not surfaced.

Woods and Maples say other businesses are letting them down also. No provider has high-speed internet available in the neighborhood. We all know children need more access to the internet to be competitive in education. It turns out small businesses have a difficult time processing credit card payments over dial-up. 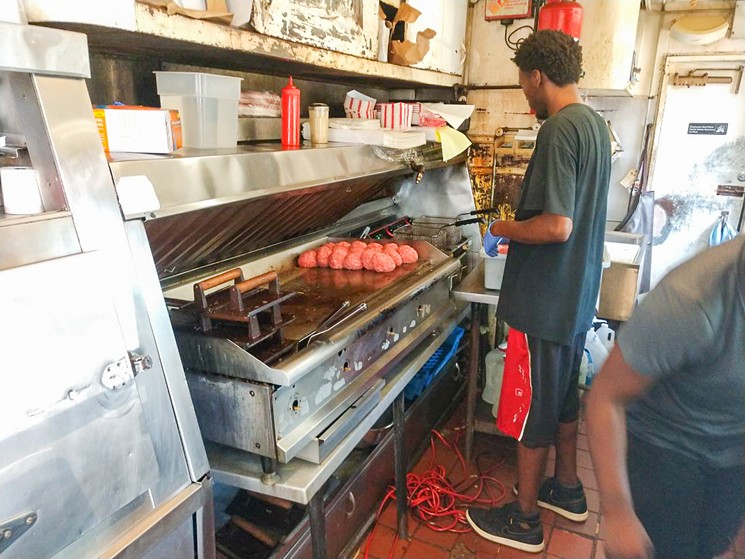 Yes, each of those mounds of ground beef is half a pound.
Philip Kingston
Wingfield’s is a partnership among Wingfield, Woods and Maples, who met when Wingfield taught freshman science to Woods and Maples at W.T. White High School. Woods and Maples then went to Prairie View A&M University (Omega Psi Phi) and returned to successful careers in tech.

The expansion of Wingfield’s has been their mission to grow their mentor’s business. I hope my description of their iconic burger will persuade you to visit, and I hope their story will persuade the city and the private sector to bet on South Beckley Avenue.

Wingfield's Breakfast and Burger, 2615 S. Beckley Ave. (southern Dallas)
KEEP THE DALLAS OBSERVER FREE... Since we started the Dallas Observer, it has been defined as the free, independent voice of Dallas, and we'd like to keep it that way. With local media under siege, it's more important than ever for us to rally support behind funding our local journalism. You can help by participating in our "I Support" program, allowing us to keep offering readers access to our incisive coverage of local news, food and culture with no paywalls.
Make a one-time donation today for as little as $1.