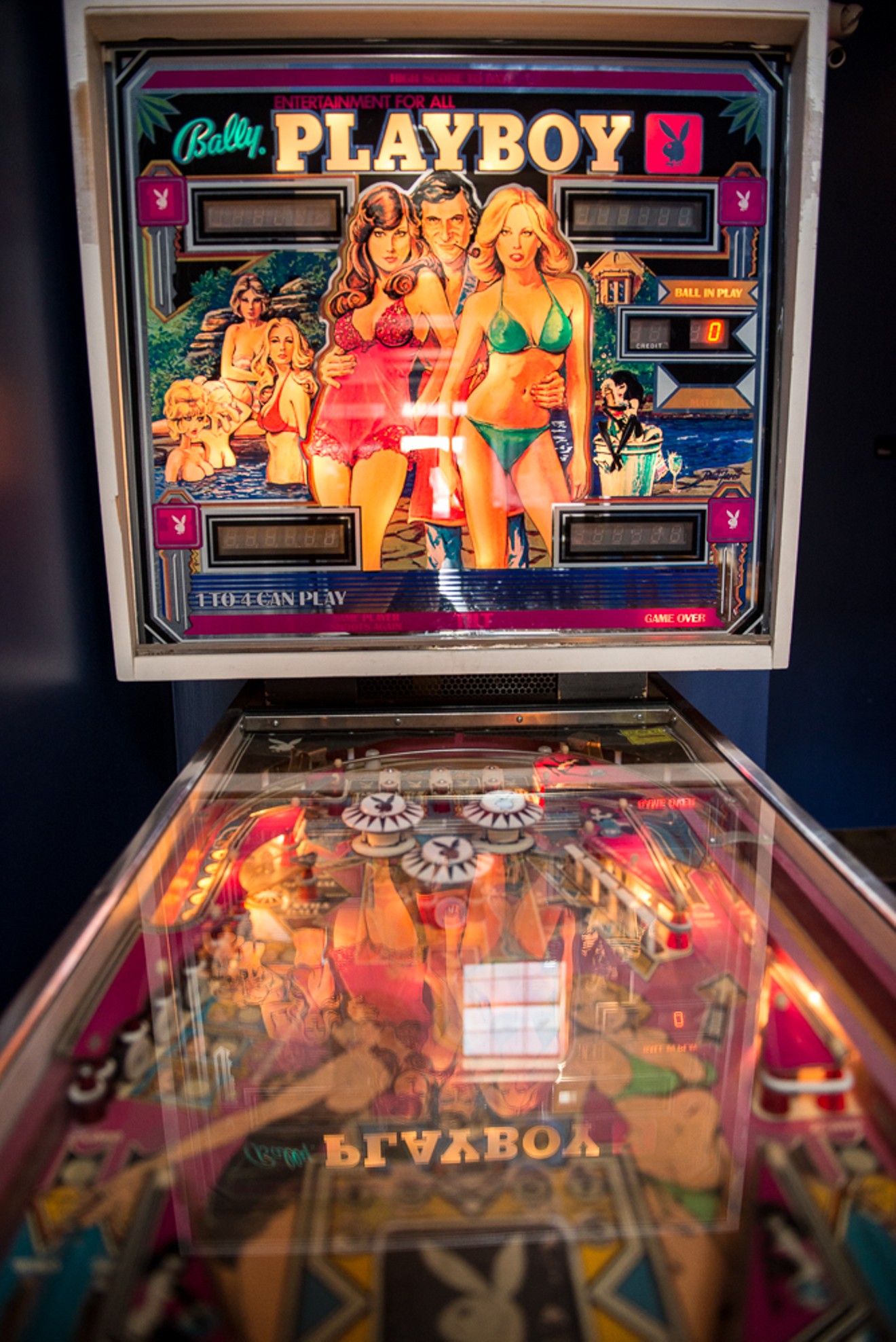 The vintage Playboy pinball machine Alison McLean
A couple of years ago, we made a plea for Dallas to step up and produce a cool pinball lounge. A renewed wave of interest in the delightfully approachable game had made its way to other major cities like New York and San Francisco — but Dallas? Nada. Well, unless you count the occasional movie theater machine with nickels, hair and soda sludge clogging its quarter slot.

Well, we’ll be damned if today you can’t throw a rock just about anywhere in this city and hit a combination craft beer bar/arcade with a pinball expert on staff. Cidercade and the Free Play franchise are just a couple of the options local pinball lovers have today.

That makes Dallas very lucky. And we're a little superstitious. So before you go hunting down these 10 rare and game-changing pinball machines that now reside in DFW-area barcades, please allow us a second to ask the universe for pothole repair in East Dallas with a mandated 20-hour work week. Hey, it couldn’t hurt.

Where to find it: Texas Pinball Museum (Midlothian)

The only place most people will ever see this machine will be a pinball convention. That’s because just 42 of them were made before mysterious issues at Dutch Pinball brought production to a complete halt. Rave reviews only add to the hype and frustration. “The best pinball of all time that no one (unless you were lucky or you are rich) can ever own,” writes Pinside commenter Dkjimbo, citing the under-glass bowling alley as one of its coolest features. If you’re a fan of pinball, the film or both, take a trip to Midlothian. The Texas Pinball Museum has a Big Lebowski on its floor (though only temporarily) and you’ll delight in seeing it come to life in game form, complete with miniature White Russians and clips from the movie.

Monster Bash recently earned a remake, which is itself proof of the machine’s status in the world of pinball. Players love the artwork and theme, which has Universal Monsters including Frankenstein, Dracula and the Creature from the Black Lagoon coming together to form a rock band. But Monster Bash isn’t all about aesthetics. It also features a lot of classic, satisfying ramp shots and toys that move in and out to create a flow that naturally guides you through the game. Give the limited edition remake a spin at Bishop Cidercade in Dallas’ Design District.

Where to find it: Free Play (Arlington)

You’re a reality TV ghost hunter investigating abandoned hospitals, visiting morgues, consulting spirit guides and battling ghost bosses in this rare machine that launched a new pinball empire. America’s Most Haunted is the first release from Spooky Pinball, a collaboration between a pinball podcaster and a video game modifier that has since produced five other popular pinball machines. Spooky made only 150 of its first machine, and America’s Most Haunted quickly sold out after winning best custom game at the 2014 Midwest Gaming Classic. Even though other Spooky releases like 2017’s Total Nuclear Annihilation have eclipsed its success, pinball fans still enjoy America’s Most Haunted when they can find it, due to its creative playfield and sense of humor.

Star Trek: The Next Generation, Williams 1993

Where to find it: Free Play (Richardson)

Somewhat surprisingly, pinball designers have seen fit to create four distinct Star Trek machines. Every regular pinball player has their favorite, but the third one, Star Trek: The Next Generation, often rises to the top. The rules are deep and you’ll remain entertained as you complete seven USS Enterprise missions, including a wormhole and a battle simulation, to reach the “Final Frontier.” When this machine was released, it also had “the most custom recorded speech in any pinball machine ever,” according to a Williams flyer. When you walk up to this machine at Free Play Richardson, you can look forward to hearing the voices of Patrick Stewart, LeVar Burton and other Star Trek actors.

Where to find it: Regeneration Arcade Bar and Pizzeria (Dallas)

Detractors of this sci-fi themed machine with minimal bells and whistles (and no multi-ball) say it’s boring, a reflection of the ‘80s when the money to make pinball machines started drying up. But there are only 900 Cybernaut machines in existence, so seize the chance to try it for yourself at Regeneration, a new arcade and pizzeria in North Dallas. Some users of the pinball enthusiast site Pinside say there are advantages to Cybernaut’s simplicity. “A good pin to use as an intro to pinball for guests that are new to playing,” commenter sixtyfourbits writes.

This Elvira-themed pinball machine clocks in at No. 12 on Pinball Owner’s list of the most coveted machines. It’s actually the second one to be themed after the vampy movie presenter. In a 2017 interview with the Observer, Elvira said 1989’s Elvira and the Party Monsters is the dearest to her heart, but that the more advanced Scared Stiff — with its six levels of terror and “stop the spider” backglass game — is more fun to play. "I’m asked a lot about my pinball machines," she said. "I’m also brought items; different (pinball machine) parts that people take off and ask me to sign."

While somewhat easy to find around these parts, this machine is a must-play for any pinball fan. It’s the most commercially successful machine ever released, with over 20,000 units sold to date. It’s also credited with innovating or popularizing features including “wizard mode,” which means a bonus level of gameplay. In Addams Family, wizard mode takes you through a tour of the family mansion, but if you’re not skilled enough to get there, don’t fret. The Anjelica Huston voice-overs, revolving bookcase and animatronic hand make this machine an entertaining ride even for pinball-wizards-in-training. One thousand special edition Addams Family machines were released in ‘94, but so far none of those have made their way to Dallas arcades.

Where to find it: Texas Pinball Museum (Midlothian)

The brand-new Texas Pinball Museum is all about promoting the “interactive art, science, history and culture of pinball machines,” so it makes sense that they have a Safe Cracker — it’s one of the most unique pinball machines out there. Safe Cracker forgets the standard three-ball game and turns pinball into a race against the clock to crack a bank safe. The game play doesn’t need to be complicated because the time crunch provides enough challenge and excitement. If you win, the machine will spit out a real token, which you can redeem for a free play, a prize or a trophy depending on the venue.

This game regularly tops lists of the greatest pinball machines of all time. You’ll never tire of jousting, saving damsels or “destroying the castle,” a game where you hit a castle toy until the drawbridge lowers and you can send your ball inside. “This game is the beginning of my end,” writes Pinside commenter DanPiper. That kind of fanaticism is why more than 4,000 of these pinball machines were made in its first run and two remakes are in production. It’s also loved for its accessibility — Medieval Madness is fun to play regardless of skill level, and because it’s not licensed, there aren’t a ton of references or jokes to get. Although there is one factoid you should be aware of: The game’s dialogue was written by Second City members, and Tina Fey voices one of the princesses.

A close-up of the game-changing Twilight Zone pinball game
flickr.com

Following the breakaway success of the Addams Family pinball machine, Bally gave its designer, Pat Lawlor, free rein to design a new machine. The result was Twilight Zone, which regularly dukes it out with Medieval Madness for top pinball honors. According to an early Bally flyer for the machine, it has “more features with patents pending than any other game in history.” Twilight Zone is a wide-body game and its large play field is jam-packed with surreal gadgets, many based on the show. There’s a gumball machine, a clock with working hands and a field of magnets that mess with your ball’s trajectory. Have fun lighting up all 14 panels to initiate the “Lost in the Zone” wizard zone with six balls, and momentarily forget about the lackluster Twilight Zone remake on CBS.
KEEP THE DALLAS OBSERVER FREE... Since we started the Dallas Observer, it has been defined as the free, independent voice of Dallas, and we'd like to keep it that way. With local media under siege, it's more important than ever for us to rally support behind funding our local journalism. You can help by participating in our "I Support" program, allowing us to keep offering readers access to our incisive coverage of local news, food and culture with no paywalls.
Make a one-time donation today for as little as $1.