The Better Block Foundation joins with the City of Garland this weekend to involve the community in creating a more creative space on Clara Barton Boulevard. HAWK Photography © 2022

Seth Cowles & Friends Comedy Crunch at the Addison Improv
Stand-up comedy is almost always worth watching, because it’s funny when a joke lands and even sort of funny (admit it) when it doesn’t. But nothing feels better than laughing with homegrown comics because, damn it, we support local talent. For $10 a person, you can discover the next big name in national comedy and see people who are already kind of a big deal around here. At 7:30 p.m. on Wednesday, Oct. 5, at the Addison Improv (4980 Belt Line Road), see longtime Dallasite and former Bostonian Seth Cowles, whose musings on marriage, divorce and the parenting of teens have made him a popular opener for acts such as Tig Notaro, Gilbert Gottfried, Frank Caliendo, Iliza Schlesinger and Janeane Garofalo. Cowles will have guests such as Gretchyo, Nately Perez and others. Get tickets online.

Soundings: New Music at the Nasher Sculpture Center
If there’s something we love more than a night of fantastic music, it’s two nights of fantastic music for just one ticket. Tickets start at $60 (available online) for a double header of Robert Schumann’s string quartets, as well as some select Mozart, Beethoven, Mendelssohn and Haydn works that apparently provided inspiration for Schumann. Both Wednesday and Thursday at 7 p.m. at the Nasher (2001 Flora St.) offer a unique concert from Yellow Barn under the artistic direction of Seth Knopp, but naturally it’s recommended to take in both performances. For more info and to buy tickets, get on the Nasher website.

Paulos B. Feerow & Friends at the Addison Improv
You have to know you’re funny to put your name on a show and call the rest of the lineup “& Friends.” Paulos B. Feerow is bold enough to do that, so we figured who better than the Dallas comic himself to write his own recommendation. From the stand-up himself: “’Once in a generation talent,’ ‘the best thing to happen to Dallas comedy,’ and ‘just a delight’ are some of the things audiences (and my mom) have said about me, Paulos Feerow, in the last 11 years I’ve done comedy,” said Feerow. He continued, “Listen, I’ve assembled an Avengers-level group of comedians to destroy you at 7:30 p.m. this Thursday, Oct. 6, at the Addison Improv. Algie Wood, Andrew Deacon, Anna Barden, Liem Smith, Sheridi Lester, and Marnie Manning (ALL THE WAY FROM BARCELONA! Yea, THAT Barcelona that your friend just visited and pronounces weird!) This is the only comedy show you need to see this week.” We’re not entirely sure if he's been diagnosed a narcissist, but we like the confidence and we'll see you there. Get your tickets online. And thanks for essentially writing this for us, Paulos. Liz Barksdale, Albie Robles and Danny Gallagher will be your professional Mac Mockers for the evening
Mocky Horror Picture Show
Mocky Horror Picture Show: Mac and Me at the Texas Theatre
Mocky Horror Picture Show has a roast for the ages. If ever there were a movie that needed to be mocked, it’s Mac and Me. There's a reason Paul Rudd repeatedly uses it to troll Conan O'Brien. The 1988 “family” film is charismatically bad and nothing short of ridiculous. E.T. wannabe? Yep. Weird NASA plot line wherein McDonald’s might play as big a part as any of the main characters? Sure. The Mocky Horror cast aren’t the only ones who get to have fun. The panel of local comics use timed prompts and provide a bag of goodies to create an interactive event that lets the audience in on the roasting as well. Make fun of Mac and Eric and Michael and well, everyone, starting at 9:15 p.m. Thursday, Oct. 6, at the Texas Theatre (231 W. Jefferson Blvd.). Tickets are a bargain at $14, available online.

Better Block Garland on Clara Barton Boulevard
The City of Garland is getting modern and partnering with Oak Cliff-based nonprofit the Better Block Foundation to “re-envision Clara Barton Boulevard” and create some city park vibes. The public is invited Friday and Saturday for two days of fun and change on the short roadway that will hopefully inspire a full-fledged redo of the Valoris Healthpark Garland Medical District. Better Block will invite the public to share their creativity while the organization tests some park-positive ideas for feedback. Friday fun starts at 4 p.m. and offers pop-ups from Lakewood Brewing, Zumba class, performance by Anastasia Flores Dance Company, a DJ, a TikTok booth and more. The fun continues at 11 a.m. Saturday with Boogie Nights Vintage, face painting, more Zumba, mobile spin classes, free COVID and flu shots, and more music. Artist Haylee Ryan will be working on a 3,600-square-foot mural on the corner for the public to view. To learn more about Better Block, get online. Megan DuChene as Ulla, Dakota James as Leo Bloom and Keith J. Warren as Max Bialystock in The Producers.
Jennifer Stewart and Keith J. Warren
The Producers at Arts Fort Worth
When it comes to theater, we like camp, comedy and, absolutely, a scam. Mel Brooks’ musical The Producers hits all the notes, pun fully intended. Starting 8 p.m. Friday, Oct. 7, Stolen Shakespeare Guild presents the romp about a down-and-out producer and his silly, scheming accountant hoping to put on the biggest Broadway flop thanks to the most investors they could dream of and all for the biggest profit possible. (Because, see, if it flops, it’s not their fault and they keep the money.) It’s on stage at Arts Fort Worth (1300 Gendy St., Fort Worth) Fridays through Sundays through Oct. 22. Get show details and tickets online.

Crime Scene Investigation: Deadly Disinformation at Dallas Central Library
We can’t promise that they’ll teach to you to lower your sunglasses dramatically, or that they’ll play The Who’s “Who Are You?” at any point during Crime Scene Investigation: Deadly Disinformation, but the Friends of the Dallas Public Library are offering a peek at what goes into forensics. Work a mock crime scene in teams with your fellow attendees and solve the case using clues and evidence from 3 p.m. to 5 p.m. Saturday, Oct. 8, at Central Library (1515 Young St.). Can’t make Saturday’s event? Don’t worry, there are others coming up at various branches throughout October. Check out the schedule and register online.

Museum Murder Mystery: An Artful Game of Clue at the DMA
The library isn’t the only place for a whodunnit. The Dallas Museum of Art (1717 N. Harwood St.) is getting into the (crime) scene with Museum Murder Mystery: An Artful Game of Clue at 8 p.m. this Saturday, Oct. 8. You must solve the murder of The Orator by investigating and naming the room where it happened, the murder weapon and the perpetrator after interviewing some key suspects you might recognize from around the museum. If you’re correct, you’ll be entered to win one of five prize packs. Tickets are just $35 for attendees 16 and up. Get them online, and keep your back to the gallery wall. Bring your lawn blankets and dancing shoes for Brass and Jazz in the Park.
©2020 Nate Rehlander
2nd Annual Brass and Jazz in the Park at Jaycee Zaragoza Park
ArtsBridge (powered by Toyota) has done it again. AT&T Performing Arts Center’s nonprofit is back with the second Brass and Jazz in the Park from 3 p.m. to 7 p.m. Saturday, Oct. 8, at Jaycee Zaragoza Park (3114 Clymer St.). The free family event is a partnership with AT&TPAC, Michelle N. Gibson and the New Orleans Original BuckShop and is an outdoor celebration of live jazz that ranges from Latin jazz to New Orleans brass. It’s a hot spot not only for live music, but also for food (beignets and more) and crafts and even Afro Brazilian martial arts demos. The event ends with a New Orleans Second Line, which is can’t-miss. Grab a blanket for the lawn and find out more online.

Turtle Creek Chorale’s That ’70s Show Sing-Along at McFarlin Auditorium
Even at their most serious and somber, the sounds of Turtle Creek Chorale can turn around any bad mood. The music is the sort that gets inside you and turns on a light. This weekend, the TCC gets decidedly day-glo with their “Good Times” vibes thanks to That ’70s Show 7:30 p.m. Saturday and 2:30 p.m. Sunday at McFarlin Auditorium (6405 Boaz Lane). Now, normally, being an audience member for the TCC means keeping the ol’ trap shut, but not this time. Lyrics will be provided, and singing along to the super hits of the 1970s is encouraged (so are bellbottoms) once you catch that “Night Fever.” Tickets start at $45, but a little disco birdy on the event page says there’s a BOGO offer. No idea how long that will last, so purchase fast!

Nocturnal — Animals in Music at North Texas Performing Arts
Plano Symphony Orchestra is entirely too good at planning events that are meant for children but that we really want to go to as childless adults. But in all fairness, who doesn’t want to go meet live animals with the Creature Teacher and then listen to a string quartet play music written specifically about animals? Give us that Flight of the Bumblebee. Show us The Swan. Sign us up! It’s part of the Plano Symphony Family Series: The Music of Night and Day, and it’s called Nocturnal — Animals in Music for what we think are obvious, and obviously adorable, reasons. It all starts at 3 p.m. Sunday, Oct. 9, at North Texas Performing Arts in Willow Bend Mall. Tickets are just $12, available online. 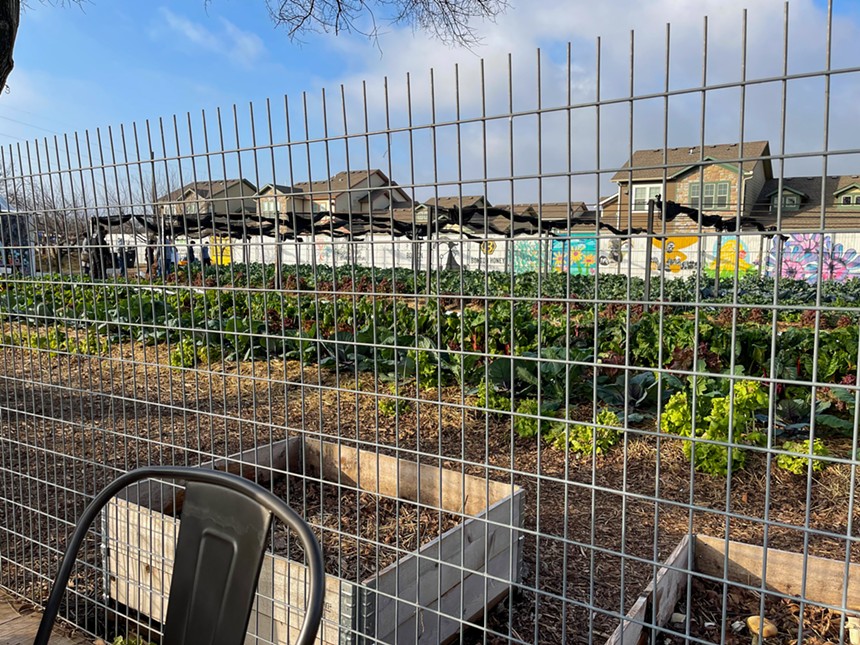 A view from Bonton's cafe, overlooking the garden. Attendees will learn a recipe from the cafe during Tuesday's demo at the Galleria.
Taylor Adams
Bonton Farms “Planting Seeds of Change” Cooking Demo at Galleria Dallas
Galleria Dallas (13350 Dallas Parkway) partners with a new charity each month, showcasing it on the Gallery Wall so visitors can learn more about it and offering interactive events. For October’s selection, Bonton Farms, the message will be about the essentials needed not merely to survive but to thrive, which include health, wellness, economic stability, education, access to fair credit and more. Additionally, Bonton Farm’s culinary team offers some cooking demos to inspire and delight. At 11 a.m. Tuesday, Oct. 11, Bonton Sous Chef Marquis will instruct attendees and burgeoning chefs through a recipe from the farm’s café. Demos are on Level 1 in front of the Bonton display. There are also visits from farm friends (definitely living, possibly cute) on Wednesdays and other demos on Saturdays. Find out more on the Galleria website.
KEEP THE DALLAS OBSERVER FREE... Since we started the Dallas Observer, it has been defined as the free, independent voice of Dallas, and we'd like to keep it that way. With local media under siege, it's more important than ever for us to rally support behind funding our local journalism. You can help by participating in our "I Support" program, allowing us to keep offering readers access to our incisive coverage of local news, food and culture with no paywalls.
Make a one-time donation today for as little as $1.
Merritt Martin
Contact: Merritt Martin