Confessions of Cowboys in the Texas Gay Rodeo 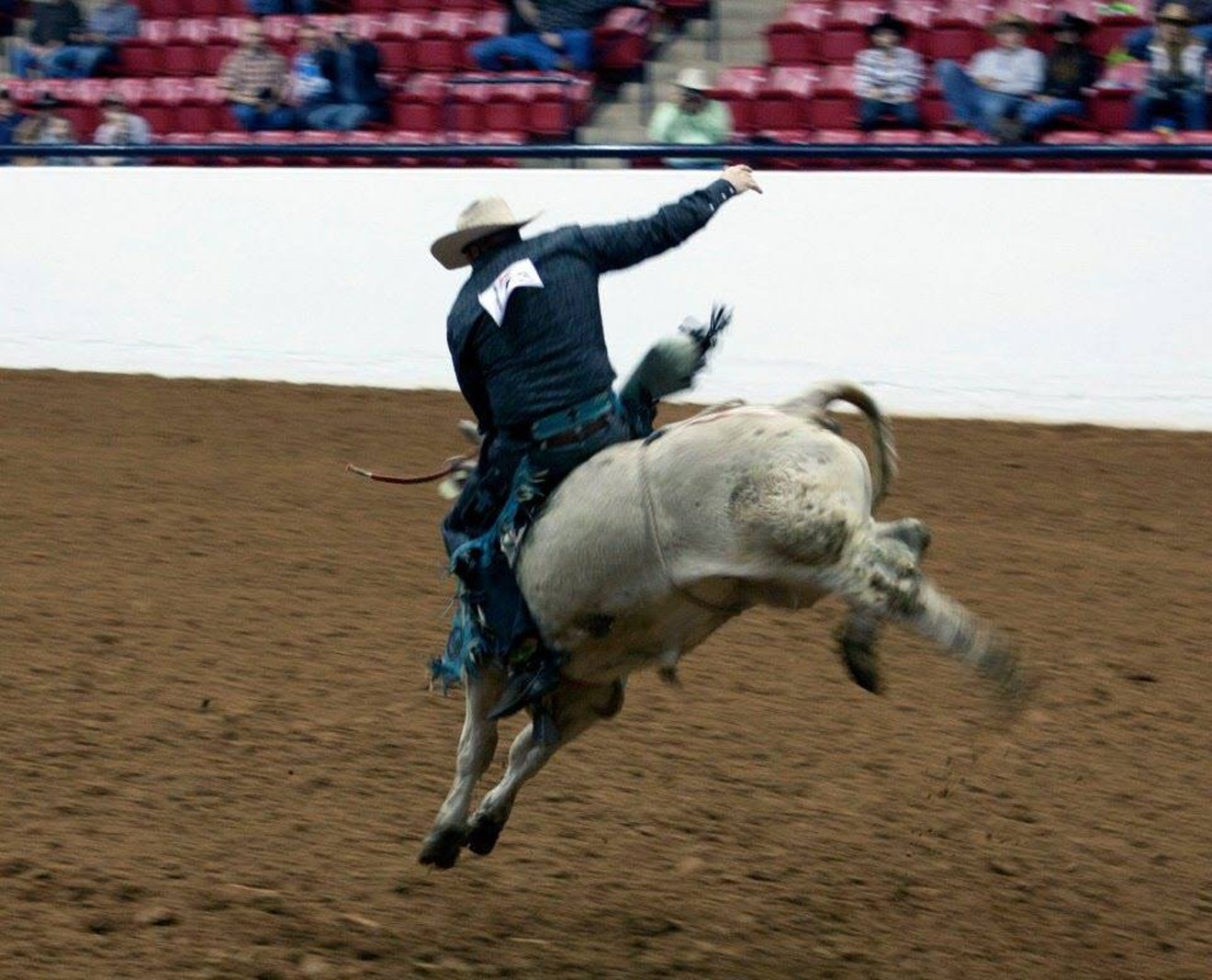 The site of the meetup is the Round-Up Saloon, Oak Lawn’s landmark gay country and western bar. It has been around in one incarnation or another since 1980. Tim Smith, the statewide president of the Texas Gay Rodeo Association [TGRA], says its original name was “Magnolia Thunderpussies,” which at the time of this writing could not be verified.

The bar has long had a symbiotic relationship with TGRA. Before they bought Round-Up in 1998, owners Gary Miller and Alan Pierce both held officer positions within the organization.

In 1989, one week before competitor Jim Gadient moved to Dallas, a six-alarm fire (later determined to be arson) destroyed Round-Up. All that remained were three chandeliers and the front door.

Within days the bar had relocated to a temporary location at Tex’s Ranch on Maple Avenue and they began to rebuild at the original location. Smith says he was at Round-Up the night of the fire, but doesn’t remember if he was wearing his pumps or his cowboy boots.

For this meeting, the cowboys have brought themselves a cowgirl, too. We establish from the get-go that nothing is off limits. You know what they say about rodeos? This ain’t their first one.

At 6-foot-3 and 240 pounds, Jim “Stella Mae Stardust” Gadient is a sight to behold. He’s had the same drag name since he was 17. A friend told him he was “bright like a star.” At the time, David Bowie’s song “Ziggy Stardust” was popular in the gay clubs. And Mae because, “Every drag queen needs a middle name.” He grew up watching Saturday morning Westerns. “I always had that dream of wanting to be involved in the Western lifestyle," he says.

Gadient moved to Dallas from Chicago in 1989. He came here to follow a boyfriend who claimed to be a native Texan (“Turns out he was Louisiana swamp trash,” he says). The relationship fizzled within six months, but the boyfriend introduced Gadient to the gay rodeo scene. He used to be an interior designer but retired at age 38. He has family money.

Perhaps this is how he owns more than 400 pairs of spurs. Back in his rowdier days, he’d wear them while cavorting up and down Cedar Springs Road in broad daylight. Ostensibly that’s the reason people call him Jinglin’ Jim. “Now that’s ‘jinglin’’ without the ‘g’. J-I-N-G-L-I-N apostrophe,” he says.

He owned more than 60 pairs of cowboy boots before he even moved to Dallas. “I have a big-ass closet,” he says. “Which he doesn’t stay in most of the time,” Smith, the silver-haired gentleman sitting to his right, says.

In addition to being the statewide president of the TGRA, Smith is also a professional florist. When you’re in his presence, there’s an awareness that he’s fighting the urge to burst into song, dance or some other heightened emotional state.

It’s as though his baseline demeanor is a pot of water the second before it reaches the boiling point. “Tessie” is his drag name, but the monogram on his TGRA shirt says Tim.

Next to Smith sits his longtime partner, Marcus Hood, who’s the president of the Dallas chapter of TGRA. Everyone calls him “Boogie.” To say Hood is the quieter of the two is like saying an atom is small. He looks every part the cowboy, with his rodeo hat and huge belt buckle, and carries a thick drawl. He and Smith have a 19-year-old daughter they’ve raised together since she was born.

Hood starts talking about his early rodeo origins. “I rode bulls in high school and I was also the rodeo ...”

“Asshole,” Smith cuts in, laughing so loudly that the table vibrates.

Gadient says a lot of contestants bring their own living quarters trailer to competitions. This tends to serve as a breeding ground for hair-raising situations. “There are a lot of people on the property at night, after the rodeo, and there can be some ...”

Smith’s face lights up, portending another interjection. “Actually, this happened at our rodeo last year. No, the year before last. It was at Fair Park, wasn’t it? When they all got drunk and were on the barrels? She was there!” Smith shouts, pointing at Mary “Honey” Honeycutt, an engineer who competes in barrel racing. He makes her tell the story.

“We’d had too much to drink,” Honeycutt says. “And we went to the arena where the barrels were set up for warm up. So a few of us stood up on the barrels, and the rest of us started racing around them.”

Smith steps in. “So a barrel is this size [demonstrates with hands], and they’re standing on it. I’m riding a horse and coming around this barrel. If I knock this barrel over, I’m knocking them and the barrel over!”

“Well, no, they’re probably not dead, but they were pickled enough, you know,” Smith says. “They probably would have been face down in horse shit and cow shit and everything else.” He mentions something called “strip barrel racing,” at which point Honeycutt politely shuts him down.

Today’s International Gay Rodeo Association rules prohibit contestants from drinking alcohol during the rodeo, but it used to be a free-for-all. “That was a very interesting time at rodeo. Contestants would get shithoused and then run barrels or ride bulls,” Smith says. “If they got thrown off, they didn’t care, because they didn’t feel it.”

The topic migrates back to cowboy sex. “I’ve heard of some action in the stalls,” Gadient says. “I don’t think that I’ve actually seen it, but I’ve heard about it. When I did overnight horse watch at Fair Park ...” 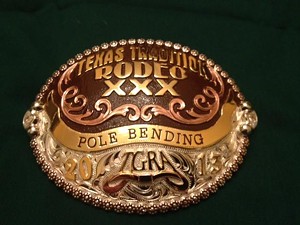 A Texas Tradition belt buckle
via Texas Gay Rodeo Association on Facebook
“I have!” Smith says. “I have! ‘I’m goin’ to get my horse.’” He makes a pained facial expression. “‘Agh! What the fuck y’all doin’ in my stall!? Y’all get your clothes back on and get out!’ But that was in L.A. That wasn’t here in Texas.” During Smith's interludes, Hood flashes an almost-grin. It’s like he doesn’t want to give Smith the satisfaction of laughing.

There’s a pregnant lull. “You want dirt. I can tell you want dirt,” Gadient says.

“Give her some, girl, you’re good at it!” Smith shouts, awakening something in the far stores of Gadient’s memory. “Oh! Oh! We had a treasurer many years ago who ripped us off. He had HIV, and he embezzled something like $50,000 from us, and what did he do? He did not go for treatment. He went to Amsterdam for leather. One of our own, cheating us, taking money meant for HIV charities,” he says. They couldn’t prosecute him because he died shortly afterward. “You can’t get blood out of a rock.”

Camaraderie runs deep in the gay rodeo community. The way Smith describes it makes it sound a lot like a real family, were that family drunk and hopped up on, say, bull uppers. “Bicker, fight, drink, cuss each other out, and after that everybody’s fine. And then you start all over and do it again the next day.”

Nearly an hour into the conversation, Honeycutt drops a bombshell: Tim worked as a bartender at Round-Up for eight years in the ’90s when he was a flight attendant for Delta Air Lines. What else are these people hiding? Who else used to work here?


“Interior designer, flight attendant, florist, bartender. All we need now is a dancer.”

Smith cuts him off. “Yeah! He’s worked here! He just didn’t get paid!” he says, stretching “paid” into approximately 14 syllables.

“He worked these boys in here, he just didn’t get paid!” Smith repeats, erupting into wicked, gravel-throated laughter. Gadient points out their clichéd career choices. “Interior designer, flight attendant, florist, bartender. All we need now is a dancer.”

Hood speaks for the first time in probably half an hour. “I’ve done that a time or two. Dance, that is.”

Smith can’t even. “Look, it wasn’t like they hired him to get up on stage over there [motions] on the damn … What do they call that, that little dance bar over there? ‘Mail Box’? The owner’s like, ‘You’ve got to come down off that stage.’ He’s over there trying to do his little thang up on there,” Smith says in a raspy voice. “We had a bunch of straight cheerleading moms with us.”

The alcohol is flowing. Smith and Gadient launch into a discussion/argument about various country and western gay bars in other Texas cities that have shuttered. Gadient adds that leather bars, too, are disappearing in the state.

“What’s a leather bar?” someone at the table asks. Immediately the realization of what a leather bar is washes over with the subtlety of assless chaps. Sweet Honeycutt chimes in, speaking barely above a whisper. “They wear like leather pants,” she says. “Like harnesses and stuff.”

Hood gets chatty when the Denton aspect of the rodeo arises. “Everybody’s thinking, ‘You’re going to the sticks.’ And what a lot of people don’t realize is Denton has a large gay community. It’s really amazing because all the businesses have opened their doors and are excited we’re coming. They’re like, ‘How can we help y’all make this a success?’ It’s been a really good process working with Denton.”

In the past, the rodeo has usually been held at Fair Park. Then it started getting prohibitively expensive. “We’ve tightened our belt and sharpened our pencil. We just don’t have Dallas bucks to blow,” he says.

Gadient is particularly excited because the man who lives at the ranch across the street from the Diamond T Arena is going to hang his rainbow lights all weekend.

Smith takes the last sip of his beer. “Yep,” he says. “They’re comin’ up to see all them queers puttin’ on a rodeo in Denton!”

A Texas Tradition Rodeo will take place Thursday, March 30, through Sunday, April 2, at Diamond T Arena, 6900 E. Sherman Blvd., Denton. Tickets are $10 at the gate. Kids under 12 get in free. For more, visit tgra.org.