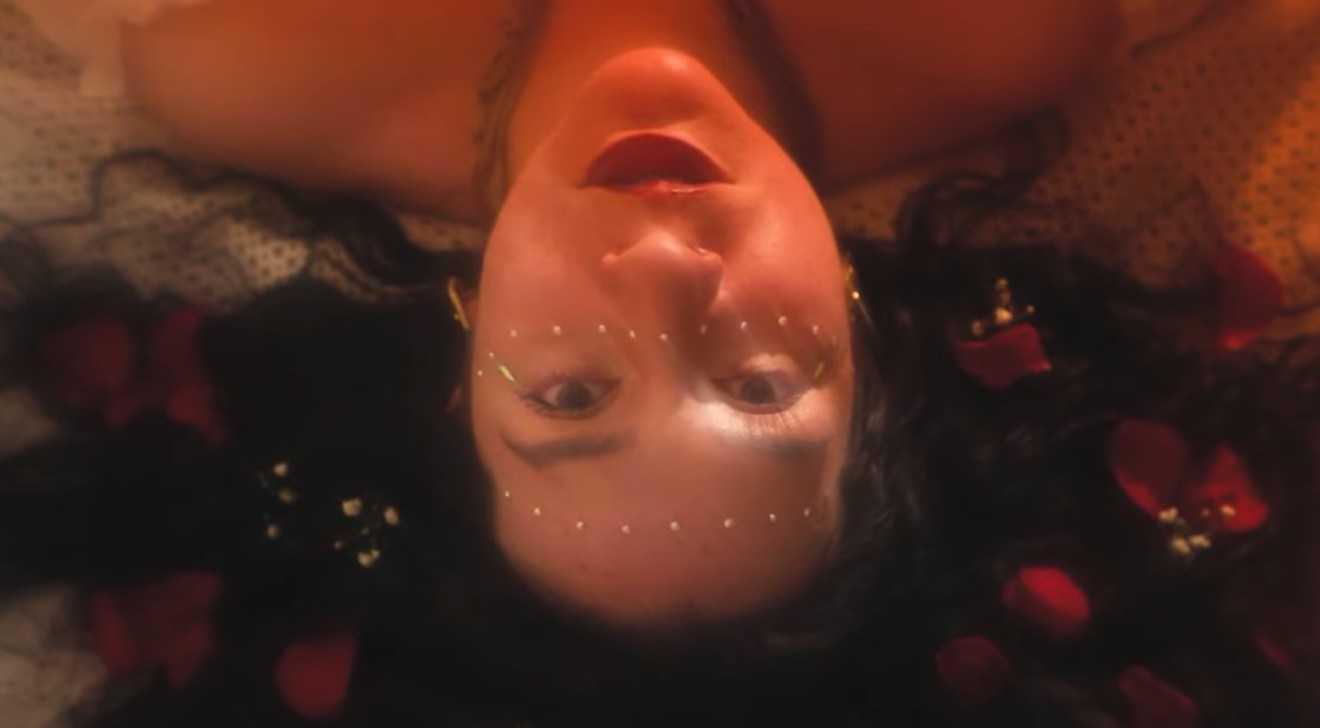 Singer Yolanda Cruz's haunting love song "Sea of Faces" makes a memorable appearance in the sleeper horror movie hit Terrifier 2. All Hallows Productions/Screenshot from YouTube
The wild success of Terrifier 2, the bloody sequel to the cult slasher film, took everyone by surprise.

It was scheduled to be in fewer than 900 theaters for a three-night stretch over the Halloween weekend, but the film found a huge audience of steady screamers and grossed over $800,000 in its opening weekend by grossing out audiences and building bigger crowds — purely from word-of-quivering-mouth.

Dallas musician Yolanda Cruz got on the soundtrack for the bloody horror film in a similar way. Director Damien Leone put out the word on Instagram looking for songs to add to the Terrifier 2 soundtrack, and Cruz decided to submit some tracks.

"I had never actually heard of Terrifier," Cruz says. "I heard a post on Facebook that one of my friends reposted. He knew friends of friends and posted a post of the director saying he was looking for two more final tracks to put in the movie. I didn't think anything would come of it, honestly."

Leone surprised Cruz by replying that he loved her song "Sea of Faces," a softly haunting, autobiographical tune about the chances she and anyone with a heart have taken to find love.

"They emailed me back and said, 'We love the track and we want to use it,'" Cruz says. "It was like a day after, and then they sent me over all the legal paperwork. This was in June or July, and the movie came out in October, so I had no idea how they were gonna use it."
Terrifier 2 became the hit horror movie that, just like its hideous star, no one saw coming. The film's main monster, Art the Clown, played by David Howard Thornton, started as a character in Leone's 2008 horror short The 9th Circle. Then Art became a minor character in the anthology horror film All Hallows' Eve and stole the spotlight by appearing in each story and revealing himself to be a violent serial killer with no conscience or limits to his level of destruction.

The internet turned the monochrome clown into a meme, prompting Leone to give Art his own feature-length film in 2006 with Terrifier. In the film, one of Art's survivors tells the story of the harrowing Halloween when they crossed paths with the clown. The film added to Art's cult status as a horror icon, prompting a second film that earned over $800,000 in its opening weekend in just 770 theaters. To date, it's grossed over $13.4 million worldwide, according to Box Office Mojo.

Terrifier 2 is being submitted for Oscar nominations — even if the judges wouldn't pick it because they wouldn't be able to sit through a film so clearly proud of its ability to use practical special effects to make audiences faint and vomit — according to Variety.

"Once they emailed me back, I was super excited, of course, and I told my boyfriend about it because he was a fan of the first one and he was like, 'You've never seen it? You need to watch it,'" Cruz says. "Of course, it was great because I freaking love horror."

Cruz's soothing love song may sound out of place for a bloody slasher tale, but Leone told us by email that "Sea of Faces" offered the perfect sound for its scene in the movie.

"Yolanda's 'Sea of Faces' instantly resonated with me,'" Leone wrote. "It gave me some soothing Natalie Merchant-type vibes, and I thought it would be perfect playing in the background of a particular scene involving the lead character Sienna [played by Lauren LaVera] and her mother Barbara [played by Sarah Voigt]."

The entire Terrifier 2 soundtrack is filled with synthesized, '80s-infused sounds that are meant to serve as a misdirection to audiences who don't want to know when a scare is coming.

"Most of the music used in the film is either much heavier dance tracks or synthwave," Leone writes. "I figured 'Sea of Faces' would be the type of music Sienna’s mother would listen to while unwinding after a stressful day. I wanted the song to help relax the audience, only to have that moment of ease suddenly shattered by a jump scare involving a falling cereal box."
Cruz has been a solo artist for most of her career outside of the bands she started with in high school and her time in the Fleetwood Mac tribute group Forever Mac. Since her song made it into Terrifier 2, she has started building a following on platforms such as Spotify and opening at places like Three Links for groups Rosegarden Funeral Party and Trauma Ray.

Of course, performing songs she wrote and recorded as a solo artist is hard to do without a band.

"For the longest time, I didn't have a band, and I wanted to play with people but I never found the right people," Cruz says. "So I thought I'll just do it myself."

She put together an all-girl rock group called Yolanda Cruz and The Daydreams with drummer Fabi Estrada and keyboard player Cheyenne Walker, and they started to learn her songs. They've even booked more live dates: at Club Dada's "Liberation of Lineage" show on Feb. 16 with Lorelei K and Phlowerie, and at Dan's Silverleaf in April.

"She's written really different vibes," Estrada says. "It's hard to put a finger on exactly what genre her songs are. I just listen to the demos and add my own spice to it."

With help from funk rocker Ducado VeGA, Cruz is working on releasing a new single next month that she says is "very synthy."

"I'm hoping I sing it in Terrifier 3," she says.
KEEP THE DALLAS OBSERVER FREE... Since we started the Dallas Observer, it has been defined as the free, independent voice of Dallas, and we'd like to keep it that way. With local media under siege, it's more important than ever for us to rally support behind funding our local journalism. You can help by participating in our "I Support" program, allowing us to keep offering readers access to our incisive coverage of local news, food and culture with no paywalls.
Make a one-time donation today for as little as $1.