Zoinks! Here's Everything We Know About the Universal Studios Theme Park in Frisco 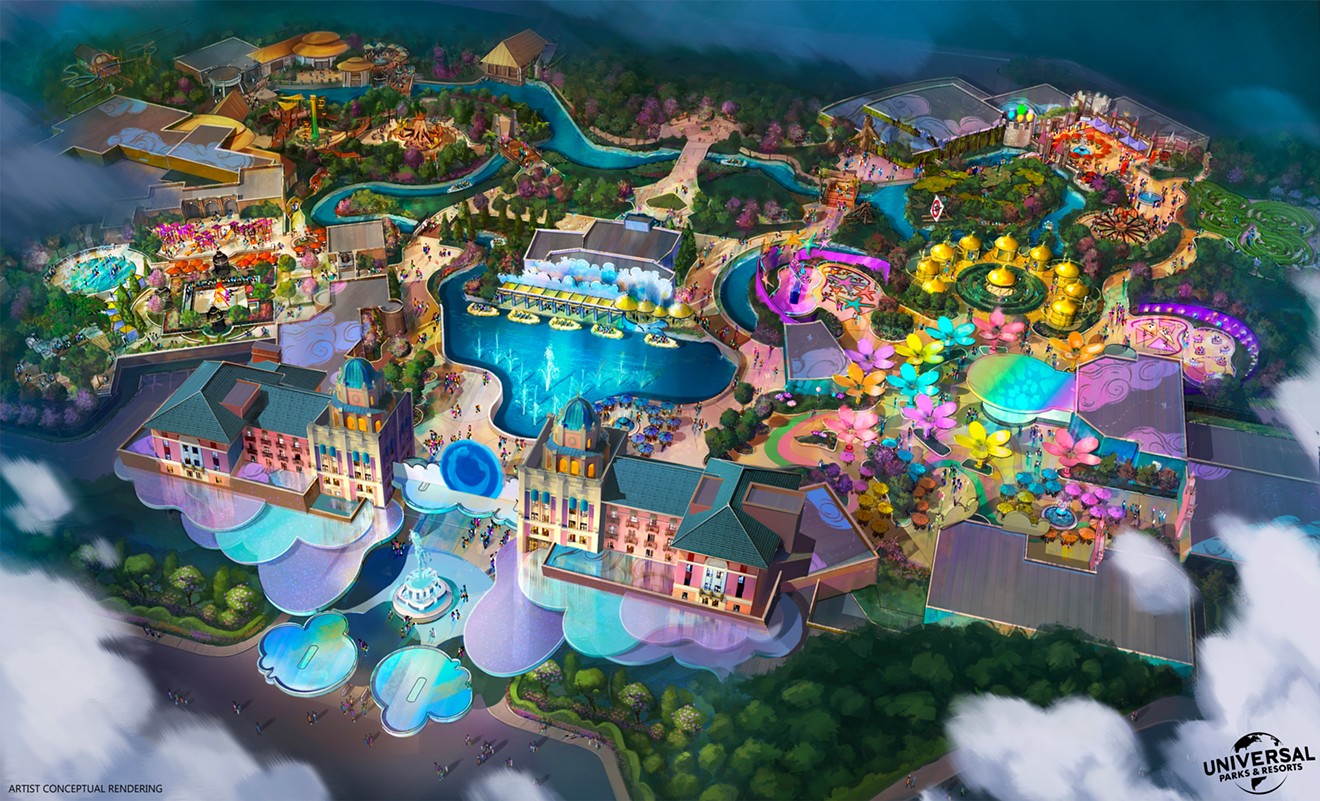 Universal Studios announced it will build a new theme park attraction for kids in Frisco, east of Dallas North Tollway and north of Panther Creek Parkway. Alanna McCary/NBC Universal
For years, rumors have persisted that The Walt Disney Company had plans to open a third American theme park somewhere in Collin County. The rumor rears its Mickey-Mouse-shaped head once a year, usually around the summer, only to dive back into the water before anyone has a chance to yank on its ears for the truth.

It turns out that the rumor was only half right. A major theme park company is going to build a new concept attraction in Frisco, but it's going to be a property built by Universal Studios.

At a press conference on Wednesday, which took place in the former building of the Frisco Public Library on the city's downtown square, Frisco Mayor Jeff Cheney announced that the city will be home to one of two new Universal Studios theme parks in development.

"It is fitting that this announcement is in this space," Cheney said at the press conference, "because a library is known as a place for great storytelling where these stories come to life, where families come and make lasting memories and where they come and spend time with their children and bring all of these stories to life."

The new park will be built on the northeast corner of Dallas North Tollway and Panther Creek Parkway, just a few miles east of the Grandscape entertainment and shopping district in The Colony. The 97-acre park, tentatively named Universal Kids Florida, will be "a one-of-a-kind theme park, unlike any other in the world, specifically designed to inspire fun for families with young children," according to a statement released by Universal Parks & Resorts.

"We have a portfolio of terrific attractions that appeal to young families around the world and we had an idea to bring all those together and create a destination that is specifically designed to appeal to families with young children," said Mark Woodbury, chairman and chief executive officer of Universal Parks & Recreation at Wednesday's press conference after revealing the first artist's rendering of the new theme park. "That's what you're seeing in this illustration now, and that's what we hope to bring to Frisco."

Universal's new Frisco location will also have an adjacent hotel themed to the park's kid-friendly design, with room for expansion for future attractions and services. Universal released an artist's rendering of an overview of the theme park showing possible attractions. These include a boat ride on a lake at the center of the property, a land with a medieval castle, a visitors center and playground space that looks similar to buildings in the film Jurassic Park and the Netflix kids' animated series Camp Cretaceous, based on the Jurassic Park and Jurassic World films.
click to enlarge

Could this section of an artist rendering of Frisco's new Universal Studios theme park be some kind of Jurassic Park or Jurassic World attraction?
Alanna McCary/NBC Universal
Woodbury described the park as "a lush landscape environment [with] four or five themed lands, each one of them full of attractions, interactive experiences, discovery experiences, exploration, learning opportunities and just a rich, rich experience for families to enjoy together."

So far, neither the city of Frisco nor Universal have released any further details regarding construction or a possible opening date, nor which movie or television properties and attractions will be included in the new theme park concept. Universal noted in its statement that the park is "intended to have a completely different look, feel and scale than Universal's existing parks and will appeal to a new audience for the brand."

The new Universal Studios concept in Frisco is aimed at younger visitors, and will be the first American expansion made by the theme park in the almost 33 years since Universal Studios Florida opened in Orlando.

Universal Studios' Hollywood location has been open for studio tours since 1915. In 1964, the studio expanded its popular tours to include tram rides that took guests all around working movie and TV sets. Twelve years later, the tram tour included a simulated attraction based on Steven Spielberg's Jaws, in which the tram drives through a fake set made to look like Amity Island as a giant mechanical shark attacks the vehicles.

Universal Studios later added a King Kong ride with a large, animatronic gorilla attacking New York City and a simulated earthquake experience called Earthquake: The Big One, that laid the foundation for the Universal Studios Hollywood theme park, according to Theme Park Insider.

Frisco's park is one of two expansions of the Universal Studios theme park chain to new parts of the country. Another statement released by Universal Parks & Recreation announced plans for a fourth, horror-themed experience in Las Vegas, called AREA15, with attractions, restaurants and shops based on Universal's iconic movie monsters like Dracula, Frankenstein, The Mummy and The Wolf Man and on popular horror film franchises directed by Jason Blum, James Wan and Jordan Peele.
KEEP THE DALLAS OBSERVER FREE... Since we started the Dallas Observer, it has been defined as the free, independent voice of Dallas, and we'd like to keep it that way. With local media under siege, it's more important than ever for us to rally support behind funding our local journalism. You can help by participating in our "I Support" program, allowing us to keep offering readers access to our incisive coverage of local news, food and culture with no paywalls.
Make a one-time donation today for as little as $1.