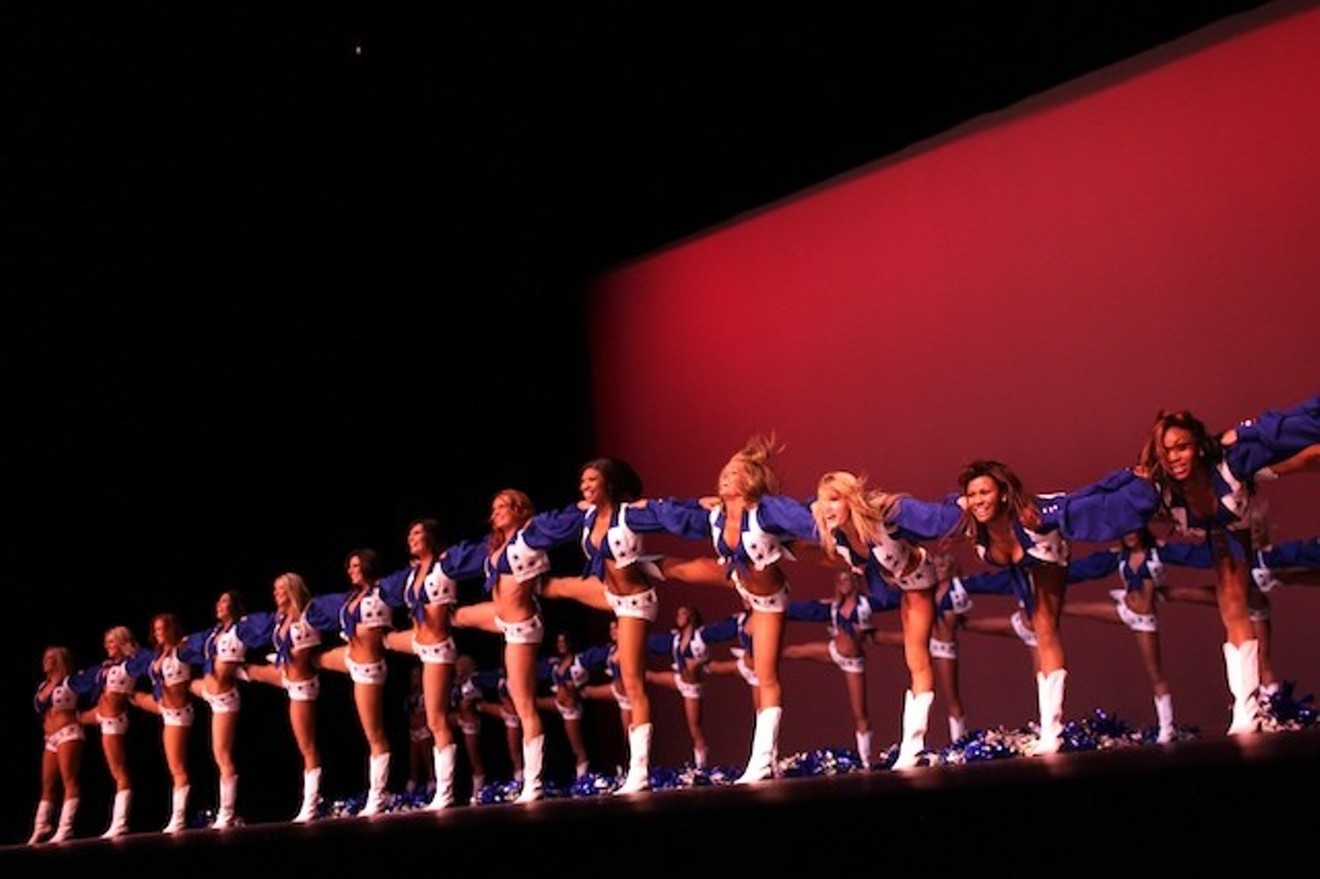 In a 2015 interview, Shelly Bramhall, an associate choreographer and events coordinator for the cheerleaders, told our clubs editor at the time that cheerleaders must be full-time students or have a full-time jobs on top of being on the squad.

Wilkins has gone on a media tour, interviewing with local news stations. Neither she nor her lawyer responded to multiple requests for comment from the Observer.

Joe Trahan, media relations and corporate communications coordinator for the Cowboys, said in an email that the organization does not have a comment.

Amanda Murphy, a CMT representative, says CMT will not issue any statements on the lawsuit.

Former and current Dallas Cowboys cheerleaders, including Brandi Redmond from The Real Housewives of Dallas and Melissa Rycroft, who is featured regularly on the cheerleaders' CMT show, have taken to social media to comment on Wilkins' lawsuit.


When I was a little girl, I wanted nothing more than to be a Dallas Cowboys Cheerleader when I grew up. It wasn’t about money, fame, or getting ahead in life elsewhere. It was and has always been a stand up organization that I proudly represented for 5 years. I am so disappointed that the organization that my mother was (and still is) a part of, would even be remotely jeopardized by false allegations. Now days the girls are paid for everything... rehearsals, calendar shoots, appearances, games, etc... Yes, there are rules, as are rules in any part-time job you could have. But that’s what it is, a part-time job. It is not a career. Im all for equal rights, but when we auditioned, (and some re-auditioned multiple times) we all knew how much money was on the table. I tried out for DCC for the 5 USO tours, for the amazing home playoff game I got to be a part of, to dance alongside dozens of recording artists, for the lifelong friendships, to follow in my mother’s footsteps, and to see 10 other countries that I otherwise would’ve never visited. I am so lucky that I was a DCC. I can’t wait until my daughter is old enough to understand just how amazing those girls are that she already looks up to, and how hard they’ve worked to earn those “cheer-lay-dur” boots, as she calls them! I’m proud of the Cowboys organization and always will be.

Incase you didn’t know...I’m a former DCC and spent many years with the organization on and off the field. My opinion on the organization is that it represents the very best. As someone that would have cheered for free because I love the game and was honored to wear the uniform, I want to speak out and make it very clear that anyone trying out knows what they are getting into. Its hard work, dedication and an opportunity of a lifetime. I think any lady that has auditioned and had that desire to cheer for America’s team would possibly feel the same to just have the experience. So if my opinion matters, I would do it all over again for free.... #takemetobrandiland #rhod #dcc

I find this very amusing and confusing. To talk so negatively about an organization they were a part of for four years...one that they willingly signed up for and agreed to a yearly contract clearly stating what their expectations for the year were, and what compensation would be...(now, she was dismissed in the beginning of last year....) And then she promoted for days on social media for everyone to watch the news for her big announcement that she was suing the Cowboys...!! All the while all her profile pictures and social pictures are of her in said uniform.. I’m all for equality in everything, but unfortunately she is taking advantage of what is happening in our society right now, because there is a lot out there that needs to change! This particular situation just makes me sad because I don’t think her intentions or motives are pure....A lot of you were asking my thoughts on this...I don’t know, what do y’all think? Also - I’m not bashing her, but rather defending an organization that I was and am proud to be part of...


But former football player Robert Steeples, who was signed to the Dallas Cowboys practice squad in 2014 and was released in 2015, commented in support of Wilkins on Instagram.

"This is a topic as a former NFL player that has crossed my mind as I've spent my time in the league," Steeples, who is now the head football coach of De Smet Jesuit High School in Missouri, tells us over the phone. "A lot of the events we do within the community are often accompanied by our respective cheerleaders. Seeing them even in our practice facility behind the scenes and the hours they put in — they were coming in when we were leaving or they were there when we got there. It gave me an even greater respect for what they did."

Commenters on social media have expressed that being a cheerleader isn't about the money. Cheerleaders do it for the experience, and Wilkins knew what she was getting into, many say. Steeples disagrees.

"For her obviously to pursue dance and cheer at that level, cheering for a professional sports organization is the only true avenue that they can pursue that with any financial gain," he says. "Just because you participate in that pursuit of your passion, and in this case it was dance and cheer, doesn't mean you advocate for everything in the system. And so it kind of puts you in a bind as far as, do I pursue my passion or do I look at the numbers and let them steer me away from my passion. That is what is the exploitation of it."
KEEP THE DALLAS OBSERVER FREE... Since we started the Dallas Observer, it has been defined as the free, independent voice of Dallas, and we'd like to keep it that way. With local media under siege, it's more important than ever for us to rally support behind funding our local journalism. You can help by participating in our "I Support" program, allowing us to keep offering readers access to our incisive coverage of local news, food and culture with no paywalls.
Make a one-time donation today for as little as $1.