Jenna Ryan Is Getting a Book Deal (Ugh), and We've Got Some Title Ideas 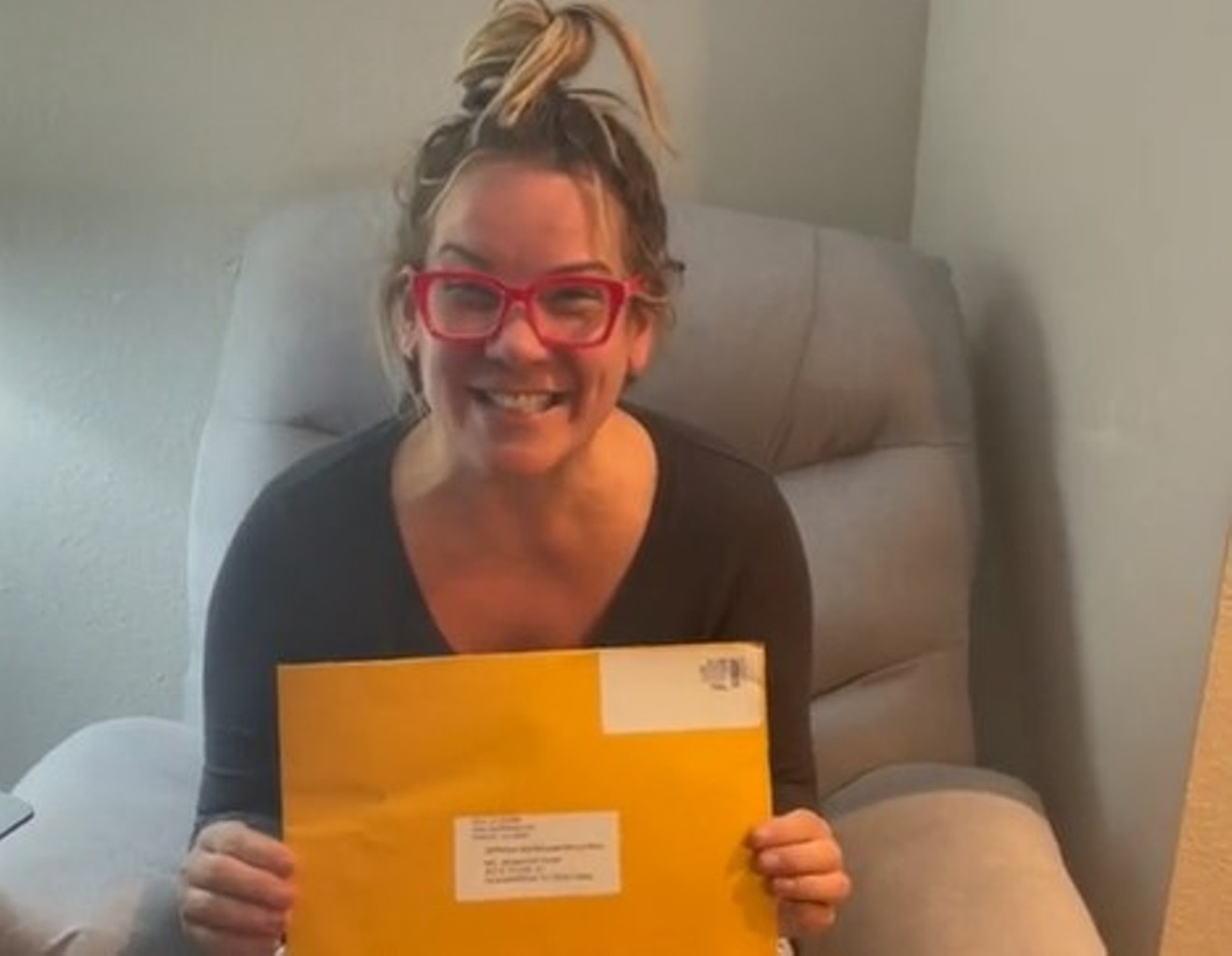 Convicted U.S. Capitol insurrectionist Jenna Ryan shows off the envelope containing her contract for a book deal on her Tiktok page because life is unfair like that sometimes. screenshot from Tiktok
Frisco Realtor and self-described protected Caucasian Jenna Ryan is living the embroidered pillow motto, "Living well is the best revenge" — even if that means the rest of us have to suffer for it.

Sure, Ryan's going to jail for participating in the Jan. 6, 2021, storming of the U.S. Capitol moments after former President Donald Trump's attorney Rudy Giuliani suggested to the crowd at the Washington, D.C., rally that they reassess the 2020 election with a "trial by combat." But while Ryan is facing 60 days in jail, it's not entirely likely that she's learned the lesson that staging a raid on a federal building when an election doesn't go your way is a bad move. People keep rewarding her and punishing the rest of us.

The latest groan-inducing Ryan news came straight from her own TikTok page, which is depressing enough since it's filled with videos of Ryan's weight loss journey and of her doing yoga and getting her highlights done. This week, Ryan teased that she might be on a reality show and also bragged on the short video site that she's got a book deal in the works.

Now, it's not easy to make fun of Ryan's latest attempt to profit from a violent insurrection that led to the deaths of five people. So that's exactly what we're going to do. Ridicule is the only thing such news deserves.

The video shows Ryan holding up the envelope containing what she says is a contract from her literary agent in Venice, California, complete with MySpace-bling/clip art stock photos probably found by typing  "white woman smiling and dancing." Ryan is bubbly and bouncing and even doing that sing-songy voice at the end of every other sentence because she's just so gosh darn excited to tell her side of the story of her role in one of the world's deadliest hissy fits.

Ryan doesn't exactly reveal any details about her book, which is nice of her. It's possible that it will be some kind of self-help tome based on a Tweet posted last January in the shadow of her arrest.

All my haters will be THRILLED to know that my publisher cancelled my Self Help book that was due to be released in February 2021.

I guess my name would not have fit at Target, Barnes & Noble and major outlets.

Let's just say for the sake of brevity that her latest deal is going to produce a self-help book. That would be ironic, because reading the founding documents of our democracy would've prevented her and others like her from being probed by the FBI. It's also a little sad that Ryan would think she can solve anyone else's problems. It's like someone who's on fire asking people if they need a Band-Aid.

We don't know if Ryan or her publishers already have a title for her self-help screed, but she's free to use any of the title suggestions put together by yours truly and the Dallas Observer staff. (Because why should only one of us go down this road?)

Crime and Barely Any Punishment

The Name of the Rosé

A Woman for All Treasons

Of Pumpkin Spice and Men

The Master and Margarita Night, WooHoo Y'All

All the President's Karens

The Unbearable Whiteness of Being

The Botox in the Striped Pyjamas

A Dunce of Confederacies

Around the Mall in 80 Days

A Farewell to Brains

Gone With the Whine

Who Moved My Bleach?

War and Peace, Then Back to War Again. Yeah Let's Just Stay Here at War

You Are a Dumbass

The Lyin', The Witch and The (Lack of a) Parietal Lobe

One Cuckoo Flew Over the Rest

The 7 Habits of Highly Insurrective People

No Sense or Sensibility

The Sisterhood of the Traveling Yoga Pants

The Lord of the Kendra Scott Rings
KEEP THE DALLAS OBSERVER FREE... Since we started the Dallas Observer, it has been defined as the free, independent voice of Dallas, and we'd like to keep it that way. With local media under siege, it's more important than ever for us to rally support behind funding our local journalism. You can help by participating in our "I Support" program, allowing us to keep offering readers access to our incisive coverage of local news, food and culture with no paywalls.
Make a one-time donation today for as little as $1.