The New Batman Is a Dallas Actor, and We're Here To Judge Several actors have tried their hand at donning the cape and cowl to play Gotham’s caped crusader, and they've debuted to various degrees of quality. Some have risen to award-worthy acclaim (we all agree Christian Bale was the best, right?), and some have bombed miserably (sorry, Ben).

Yet for many actors who’ve appeared on the silver screen as The Dark Knight, even more have populated the small one. Batman cartoons have been part of the animated world since Super Friends in the 1970s, and they reached their highest peak in popularity with the beloved Batman: The Animated Series and its 1993 spinoff film Batman: Mask of the Phantasm. Animated Batman adventures have reached a new peak within the last decade thanks to the DC Animated Universe, which adapts some of the key storylines in comic book history into longer adaptations.

Batman: The Long Halloween is the latest direct-to-rental (physical media or VOD, take your pick) film to star the world’s greatest detective, and this time it's a Dallas actor who is giving him his distinctive gravelly voice. Jensen Ackles just ended his 15-year run on the cult fantasy series Supernatural, but before heading into spinoff territory with his character Dean Winchester, he took the time to spotlight Bruce Wayne. 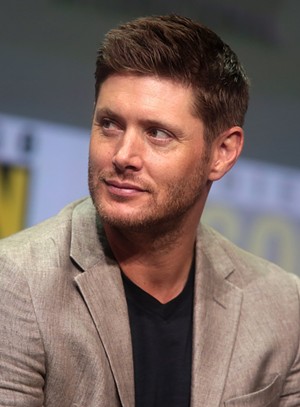 Native Dallas Jensen Ackles is the latest actor to get the keys to the Batmobile.
Gage Skidmore from Peoria, AZ, United States of America, CC BY-SA 2.0, via Wikimedia Commons
This isn’t the first time the Dallas actor has entered the superhero world. He first popped up as a fan favorite on Smallville and lent his voice to Batman’s protégé turned supervillain Jason Todd/Red Hood in Batman: Under the Red Hood, and he’ll next be seen as the subversive antihero Soldier Boy in the hotly anticipated third season of The Boys. That being said, there are few roles with fan bases as dedicated as the Batman community, no matter how many Supernatural stans are still kicking around on Tumblr.

Our verdict? We think our local guy did a pretty nice job. The Long Halloween, adapted from the 1996-97 comic run of the same name, is one of the grimmer storylines, chronicling the failed attempts to catch a serial killer by the triumvirate of Batman, Commissioner Jim Gordon, and District Attorney Harvey Dent (before he makes the transition into the evil Two-Face).

Although Ackles is best known for lighter material, he’s able to slip pretty seamlessly into the grounded approach.

Just make sure you know going in that this one isn’t for the kiddos. The Dark Knight may be mostly looking for clues, but there’s still a fair amount of violent beheadings, shootouts, tortures and even some superhero sex play. Ackles doesn’t get to drop the F-bomb in the PG-13 Part One, but maybe he’ll get a “Holy Fuck, Batman!” in the R-Rated Part Two.

Compared with other animated projects centered on action and excitement, The Long Halloween is a slower detective story that has more in common with Mindhunter or Zodiac than it does with the madcap energy of the Adam West era. We like what Ackles does to make Batman into a grizzled private eye driven mad by a case he can’t seem to crack.

Who is this mysterious “Calendar,” who targets key Gotham figures for assassination at different holiday events?
We actually don’t know yet, because only half of the story has been unveiled. Part One was released on June 22, and the second installment won’t be accessible until July 27. Avid comic book readers may know the reveals that are coming, but the rest of us novices will have to hold off until then.

For the time being, we’re happy to see a local star donning such an iconic role and making it his own. Hollywood has reached such a superhero obsession point that nearly every living performer is going to end up in tights one way or another, except for maybe Daniel Day-Lewis. That doesn’t change the fact that being Batman is still pretty damn cool.
KEEP THE DALLAS OBSERVER FREE... Since we started the Dallas Observer, it has been defined as the free, independent voice of Dallas, and we'd like to keep it that way. With local media under siege, it's more important than ever for us to rally support behind funding our local journalism. You can help by participating in our "I Support" program, allowing us to keep offering readers access to our incisive coverage of local news, food and culture with no paywalls.
Make a one-time donation today for as little as $1.