10 Places You Can Go on the M-Line Trolley Free transportation? See where this trolley can take you. courtesy M-Line
Streetcars and trollies were a staple of the urban experience when the first electric trollies hit the rails in the late 19th century. Since then, most cities have dismantled or converted their trolley systems to keep up with the times, but Dallas’ McKinney Avenue trolley line reopened in 1989, long after the heyday of the North American trolley.

The M-Line Trolley became one of the first successful heritage streetcar systems in the U.S. Since the expansion of the trolley line in 2002 and again in 2015, the M-Line has gone from being a quaint reminder of the past to a thriving part of Uptown and downtown Dallas. There are also plans to expand the M-Line to connect with DART’s Dallas Streetcar.

What’s the point in hopping on Rosie or Green Dragon, Matilda or any of the other vintage and modern trollies that run along the M-Line? The destination, of course, and these 10 M-Line adjacent attractions will make any ride on the trolley into a daylong adventure.

The Magnolia
Long thought to be one of Dallas’ best movie theaters, The Magnolia is just down the street from an M-Line stop in Uptown’s West Village. The theater, which was redesigned in 2012, is a film fan’s dream, with comfortable seats, gourmet concessions and a sophisticated mix of classic, mainstream and independent film showings. Aimed to appeal to an upscale crowd, the attached Magnolia Bar has a full suite of cocktails and top-shelf liquor, which you can bring to your dark theater seats. After taking in a matinee, hop back on the M-Line like an old-timer and carry on with the rest of your day. 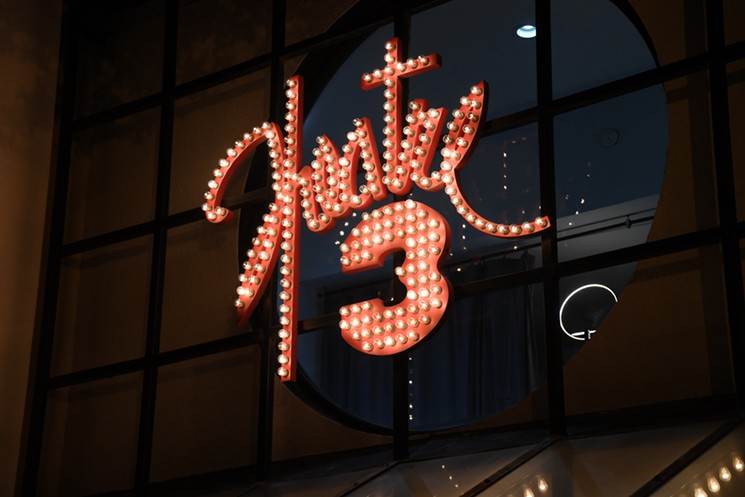 courtesy Theatre Three
Theatre Three
If movies aren’t your cup of tea, or if you’d like your day riding the M-Line to have an even more analog feel, taking in a play might suit your fancy. The theater's final season of its 18-year run of Joe DiPietro and Jimmy Robert’s musical I Love You, You’re Perfect, Now Change ends Sunday. The play is the longest-running show in the history of Dallas theater, which Theatre Three has been a part of for nearly 60 years. Founded in 1961, this innovative and historic theater is a perfect match for a day on the trolley. 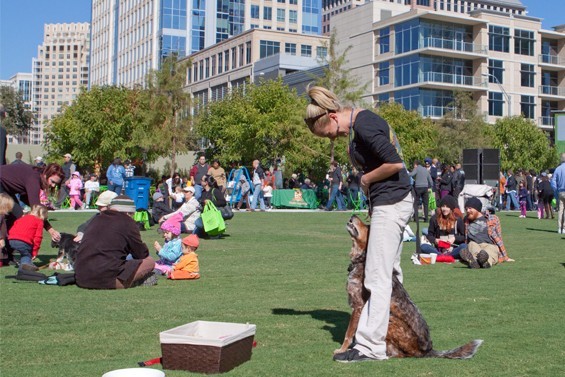 Klyde Warren Park
After the 2015 expansion of the M-Line, trolley service began stopping right in front of one of downtown Dallas’ best features. The 5.2-acre park, which opened in 2012, acts as a sort of dividing line between the Uptown and downtown neighborhoods that the M-Line trolley connects. Offering everything from tai chi and yoga classes to musical meditation, croquet and a dog park, Klyde Warren is a one-stop shop for outdoor fun. Although the weather may be a bit cold for a park, it’s still worth a stop for a visit to Savor, the park's restaurant, or one of the many food trucks that set up shop there every day.

Dallas Arts District
Since the 2015 expansion, the M-Line goes beyond Klyde Warren Park and into one of the largest arts districts in the United States. Ride the trolley right up to the doorsteps of museums, opera houses, architectural marvels and sculpture gardens, all within the cultural center of Dallas. Walk from museum to museum or get tickets to a speaker or show at any of the performing spaces in the area. No matter what your plans for the evening are, a ride on the trolley before or after is the perfect complement. 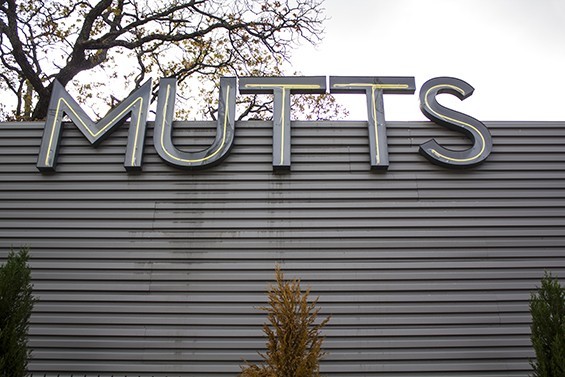 Zara Walsh
Mutts Canine Cantina
For dog lovers, Mutts Canine Cantina is a must-see spot. Let your favorite pet pals enjoy the fresh air, as you ride the trolley for a burger and beer. Owned by the group that owns nearby kitchen and bar The Rustic, this burger stand, a former dog park, is the best place to chow down with your pup. Less than a block away from the M-Line’s end at City Place/Uptown Station, Mutts also makes a good starting point for a day of doggy fun at Klyde Warren Park. 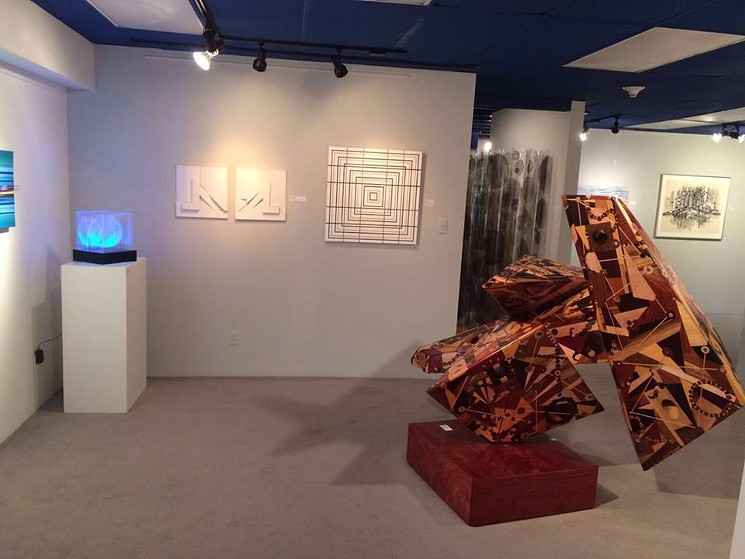 courtesy of Museum of Geometric and MADI Art
Museum of Geometric and MADI Art
A block away from the M-Line stop at Cole Avenue and Bowen Street, this museum is a bit off the beaten path, literally and figuratively. Known for being the only museum dedicated to the obscure MADI art movement of the 1940s, this is a one-of-a-kind landmark in Dallas. Featuring work from masters of the style, such as Carmelo Arden Quin and Jesús Rafael Soto, the MADI movement emphasized geometric shapes that go beyond the traditional frame. Nonrepresentative and decidedly modern, this art style may not be everyone’s cup of tea, but for those who can appreciate it, this museum is a treat.

Tour the rails
Streetcar lines and trollies crisscrossed Downtown Dallas from the turn of the century through the 1930s. The M-Line was resurrected, in part, from the lines of the early 20th century, and even some of the trollies are from the turn of the century, including the 122, better known as Rosie. Built in 1909, this trolley was the first car to ride the line on opening day in 1989. Just enjoying a ride in one of these vintage cars and taking a tour of the city is an adventure.

Crooked Tree Coffeehouse
Right along McKinney Avenue Transit Authority’s original route, at McKinney Avenue and Routh Street, this cozy coffee spot is a great place to recharge after a day on the M-Line. Located in a vintage bungalow from the 1920s and staffed by knowledgeable baristas, Crooked Tree has ambiance and flair. Delicious treats from local providers and chefs are also available. Everything from Hypnotic Donuts on weekends and Tacodeli tacos in the morning can be paired with excellently brewed coffee, espresso and teas. This quaint little coffee house is the perfect retreat as your day on the trolley winds down.

Christie's Sports Bar
Round out the evening at this family-owned bar, an Uptown landmark since 1991, next to the M-Line’s McKinney Avenue and Allen Street stop. Christies offers a full menu of elevated yet traditional bar food and more than 50 TV screens for a variety of sporting events. It has just enough energy to keep your adrenaline pumping at the end of the night, and is a sports fan's paradise. Outfitted with pool tables, Golden Tee and daily drink specials, Christie's is the perfect place for a nightcap or a big night out. courtesy The Ginger Man
The Ginger Man
This Texas chain of bars has always been an Uptown favorite. Unlike Christie's, this austere and inviting pub is perfect for getting a quiet pint before turning in for the night. With an extensive selection of craft beers on tap and bottled, there’s something to suit every palate or preference. If you feel a bit lost, the staff is glad to walk you through while you wait for your cheese plate or bratwurst. A block away from the trolley's McKinney Avenue and Boll Street stop, The Ginger Man is a cozy and classic pub to end a night along Dallas’ M-Line.