Some People Don't Like That a Mexican Artist, Not a Local, Designed a Mural in Oak Cliff 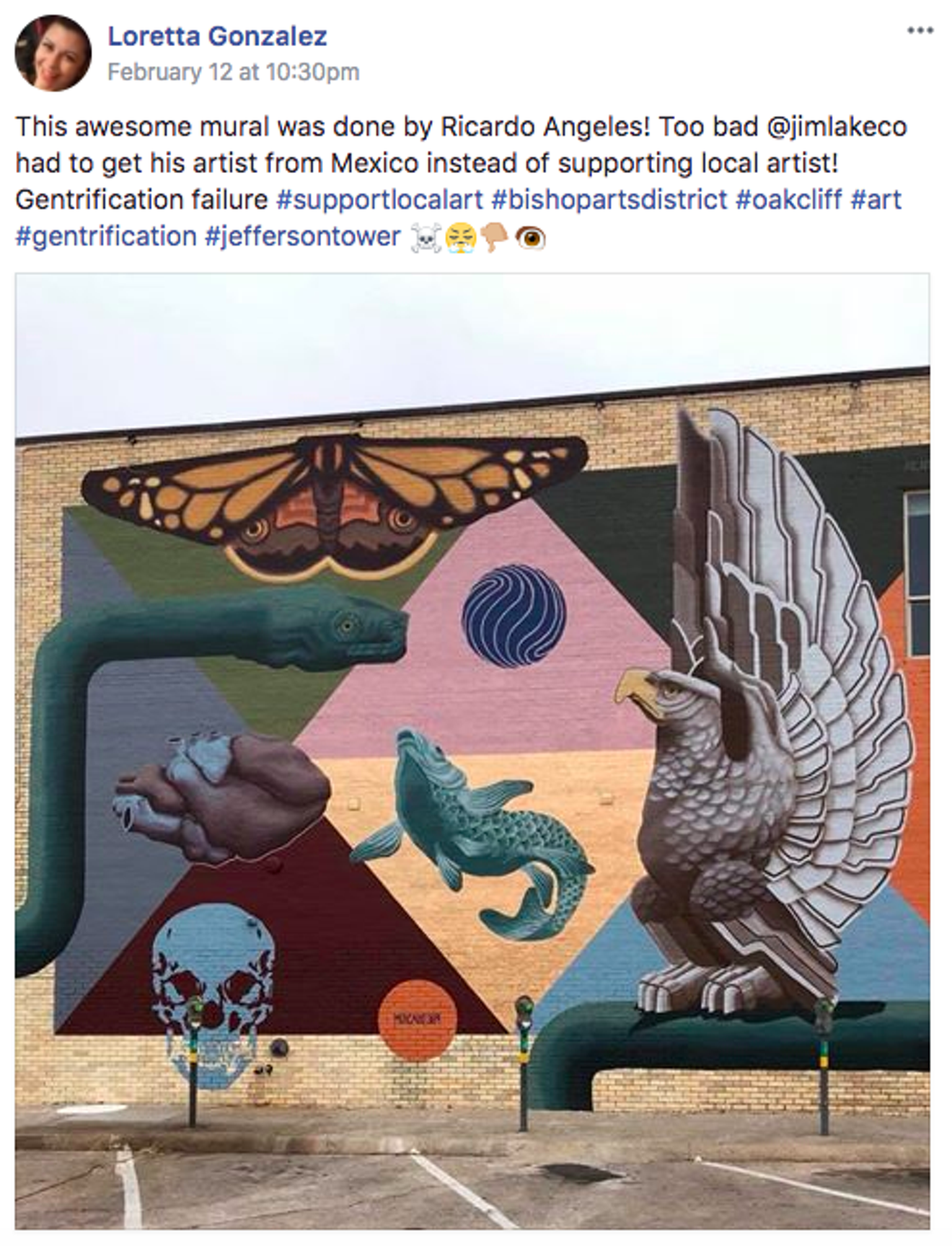 Are you offended a nonlocal artist designed this mural? screenshot, Facebook

There’s a new mural in Oak Cliff. And as with almost all art, there are some opinions about it.

The mural includes an eagle, a skull, a snake, a heart, a fish and a butterfly on tiled, multicolored triangles. It's part of an effort to beautify (read: gentrify) Oak Cliff and the Bishop Arts District. Mexican artist Ricardo Angeles designed it.

The debate began when Loretta Gonzalez posted a picture of the mural to the Oak Cliff Neighborhood Facebook group. “This awesome mural was done by Ricardo Angeles,” Gonzalez wrote in her post. “Too bad [Jim Lake Companies] had to get his artist from Mexico instead of supporting local artist! Gentrification failure.”

For Lake, the decision to go with Angeles as the artist was fairly simple. “Ricardo approached me unsolicited with the concept, made a proposal, and I loved it,” he said.

Several people commented on Gonzalez’s post. Some supported her opinion that the mural should have been completed by a local artist. Others didn’t seem to care.

“I want to hold developers' noses to the ground on many things,” Julie McCullough commented. “Who they hire to paint the side of their buildings with beautiful murals is not one of them. Also, this world doesn’t owe us artists anything. If you want something, build the bridges to make it happen, don’t tear them down.”

Others in the group said diversity makes up Oak Cliff.

“I love this,” Marcie Dodd commented. “As an artist myself who was born and raised in Oak Cliff, I have zero problem with someone from Mexico painting a mural here. Oak Cliff is built on diversity, creativity, cultural integration and community. There happen to be dozens of murals painted by Oak Cliff artists and they are beautiful, too. I think it’s an odd complaint to mention where the artist comes from when this wall could just as easily be covered with graffiti.”

According to the group’s description, friendly debate is welcome and encouraged. “Oak Cliff Neighborhood is an all inclusive group of neighbors and friends in ALL areas of Oak Cliff — North, South, East & West,” the description reads. “Sharing of posts is encouraged and fully supported. Freedom of Speech is welcome within social norms. Racism, sexism and other hate speech will not be tolerated. Posts will not be deleted simply because an admin does not agree with it.”

Although residents might differ on who should have designed the mural, most people can agree on one thing: It could be worse.

Neither Angeles nor Gonzalez responded to requests for comment.