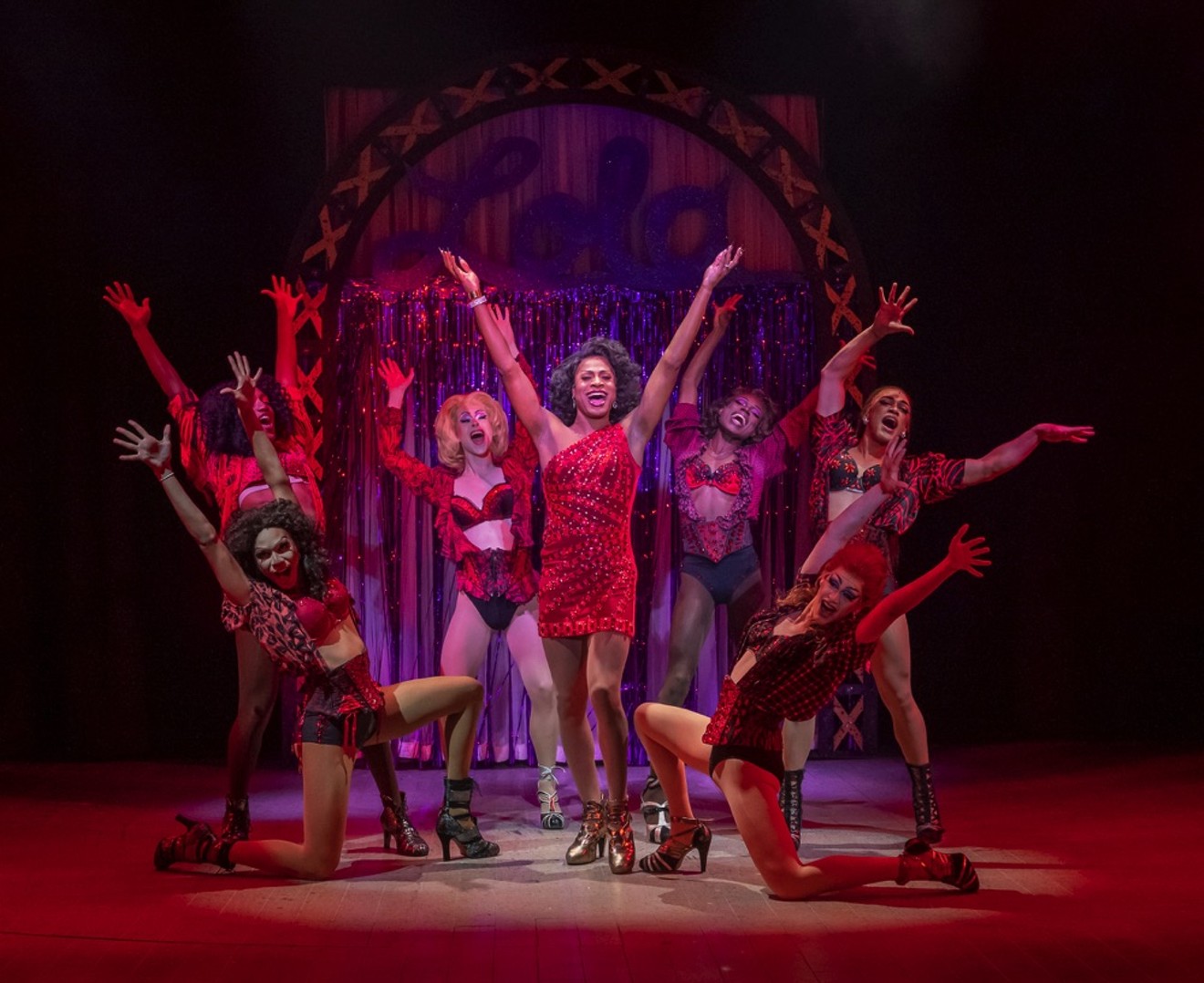 Lee Walter gives a mesmerizing performance as Lola in the Uptown Players production of Kinky Boots, by Harvey Fierstein and Cyndi Lauper. Mike Morgan
Like the thoughtfully crafted footwear of its title, Kinky Boots remains a fine fit for an entertaining evening.

The musical, rapidly approaching a decade since its Broadway bow, has lost none of its zest in the years since its debut — if you take into account the 2005 film upon which the musical is based, its longevity becomes even more admirable. Arguably, its core messages about empathy, tolerance and understanding are even more essential today than when Kinky Boots premiered on Broadway in 2013.

The Uptown Players’ production of the Tony Award-winning musical (book by Harvey Fierstein and music and lyrics by Cyndi Lauper) is anchored by several stellar performances, not least of which is transfeminine artist Lee Walter’s full-bore portrayal of the vivacious Lola. Walter’s dynamic vocals, playfully encompassing registers high and low, coupled with her quietly devastating moments of naked vulnerability are nothing short of mesmerizing.

Equally arresting and with just a handful of showcase moments very nearly stealing the show right out from under her cast mates is Rachel Nicole Poole, whose fantastic turn as Lauren, the lovestruck assistant to Max J. Swarner’s Charlie Price, brims with an infectious brio.

Kinky Boots follows the story of Charlie, a Northampton lad eager to escape small-town life for the bright lights and promise of London. A life in the big city is preferable to staying home, shackled to his family’s shoe factory. In short order, however, Charlie finds himself forced into running Price & Son, a company teetering on the verge of closure.

It’s only after Charlie crosses paths with Lola, a cabaret performer extraordinaire, that the pair hits upon a Hail Mary: creating a signature line of high-heeled boots, tailored to the demands of drag queen performance, in an effort to dazzle buyers and potentially keep Price & Son afloat. As Charlie and Lola work to bring the boots to life, they become enmeshed in one another’s lives, discovering how much more they have in common than not.

Walter is electrifying throughout, whether she’s belting to the back row or weeping softly into a mirror.

Befitting a musical authored by Harvey Fierstein and Cyndi Lauper, humor and hummable melodies abound. Kinky Boots has a few gems in its first act, including the ribald, rousing “Sex Is in the Heel,” “The History of Wrong Guys” and a two-handed tearjerker “Not My Father’s Son,” which Walter and Swarner delivered with the wounded passion of two lost souls clinging to one another in a moment of profound anguish.

Whereas the first act of Kinky Boots introduces a multiplicity of plot strands which are easy enough to follow, the second act remains a chaotic race to the finish, straining to incorporate reconciliation, overcoming bigotry, a couple near the altar simply calling it quits, a company’s breakneck race to make a crucial deadline and a grand finale built around embracing identity and accepting differences.

It’s a breathless rush that occasionally feels like trying to shove your foot into a shoe a couple sizes too small, but it should be noted that’s a flaw in the musical, not the Uptown Players’ performance.

The cast is uniformly excellent — particularly in the nonspeaking roles, along the edges of scenes, several of the reactions and bits of physical business enhance the humor of the piece — although the show is unquestionably Lee Walter’s. The role of Lola is a feast for any actor eager to showcase the breadth of their talent, and Walter absolutely seizes the opportunity, both as Lola and as Simon, the man beneath Lola’s frocks and wigs. It’s a brash, exuberant piece of work, and Walter is electrifying throughout, whether she’s belting to the back row or weeping softly into a mirror.

There are elements of Kinky Boots that haven’t quite aged as well — a few of Fierstein’s elbow-in-the-ribs one-liners about drag queens and transvestites feel a little dusty in 2022, although the character of Don (played here by Troy Tolleson) and his narrow-minded bigotry feel all too of-the-moment — but those are minor quibbles in the grand scheme of things.

That a musical with such a simple but often ignored message — “Never let them tell you who you oughta be/Just be/With dignity/Celebrate your life triumphantly,” as the lyric in “Raise You Up/Just Be” goes — continues to endure and entertain long after its creation is not unlike a pair of Price & Son’s shoes: a well-built pleasure.

Uptown Players’ production of Kinky Boots opened July 15, and runs with eight additional performances through Sunday, July 31, at the Kalita Humphreys Theater, 3636 Turtle Creek Blvd. Performances are at 8 p.m., Thursday-Saturday; and 2 p.m., Sunday. Tickets ($40-$60) are available at uptownplayers.org.
KEEP THE DALLAS OBSERVER FREE... Since we started the Dallas Observer, it has been defined as the free, independent voice of Dallas, and we'd like to keep it that way. With local media under siege, it's more important than ever for us to rally support behind funding our local journalism. You can help by participating in our "I Support" program, allowing us to keep offering readers access to our incisive coverage of local news, food and culture with no paywalls.
Make a one-time donation today for as little as $1.