It takes three to tango: him, her and Christ. Leolintang/Getty Images

Two years ago, I got out of an eight-year relationship with my high school sweetheart, and because I’ve since been in the Darwinist wasteland that is the dating world, I’ve signed up for apps like Tinder, Bumble and Coffee Meets Bagel. I even downloaded an app called Hater that matches people based on mutual dislikes, and yes, it was because Mark Cuban invested in it on an episode of Shark Tank (Mr. Cuban, if you’re reading this, your investment doesn’t look to be paying off where we’re sitting).

I met some of my best friends on Tinder, and I’ve had a couple of short-lived relationships because of it, so you could say I’ve had at least a modicum of success with it. With Bumble, not so much. With such a crowded space of matchmaking services, it seems like those two apps are the major players in the industry (Get it? Players? Dating?)

One of the most advertised dating sites/apps is Christian Mingle, whose target demographic is self-explanatory. But the culture of Christian Mingle is more than just that of a religion with more than one billion adherents; there’s a specific ambiance to the website that I didn’t know about, and so I made a Christian Mingle account to learn more.

I went undercover with the name “Eric Lynn Wright,” which was Eazy-E’s legal name (my middle name is also “Lynn,” and our first names kind of rhyme). I tried to get a sense of members of both sexes, but that would require me to say that I’m bisexual. Doing that didn’t seem tactful since it’s a Christian website, but more important, I’m straight, and there’s something about posing as a bisexual person even under an alias that felt wrong.

With what little tools I had, I created and honed my character. I thought about using pictures of an Urban Outfitters model, but I didn’t want to risk any legal trouble. I also thought about asking my more attractive friends if I could use their pictures, but it didn’t feel right dragging them into this whole charade. So I reluctantly decided to use my own photos, hoping I wouldn’t come across someone I know. I made my Eric Lynn Wright character a property claims adjuster, and even though I am affiliated with the Churches of Christ, non-denominational seemed more likely to get me matches, so I went with that.

I didn’t necessarily go undercover just to troll, but I still saw fit to give my bio a bit of a satirical undertone: 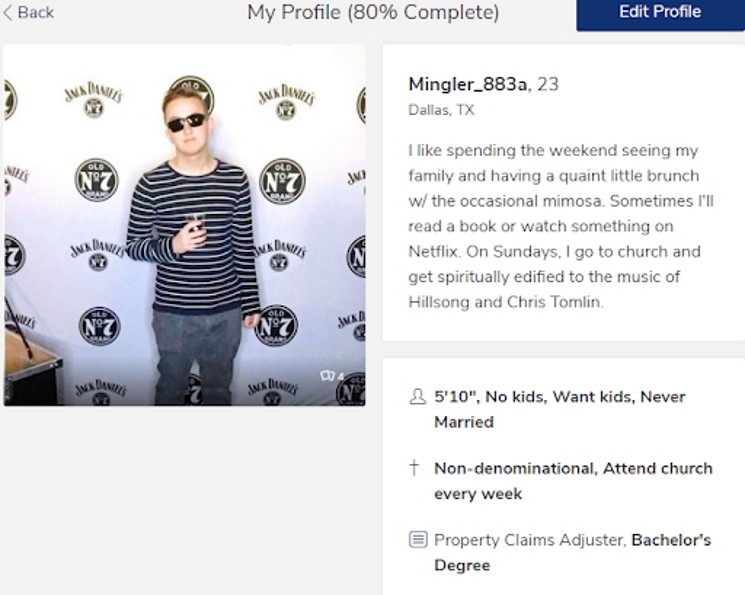 
I was only able to message my matches if I opted for one of three membership plans: $120 for six months, $75 for three months and $42.99 for one month. As you can guess, the option to message wasn’t
economically feasible, so I decided to look at profiles and document the ones that stuck out the most.
I think Constantine beat you to that punch 17 centuries ago.

Christian Mingle
So, uh, is wine on the first date off the table, or no? 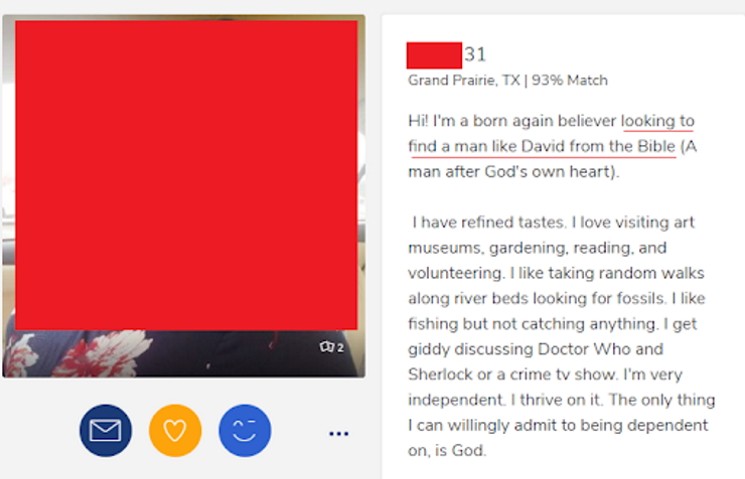 Christian Mingle
If you have ever had sex with a woman before killing her husband, holla.

Christian Mingle
What happened the last time you followed your heart?! 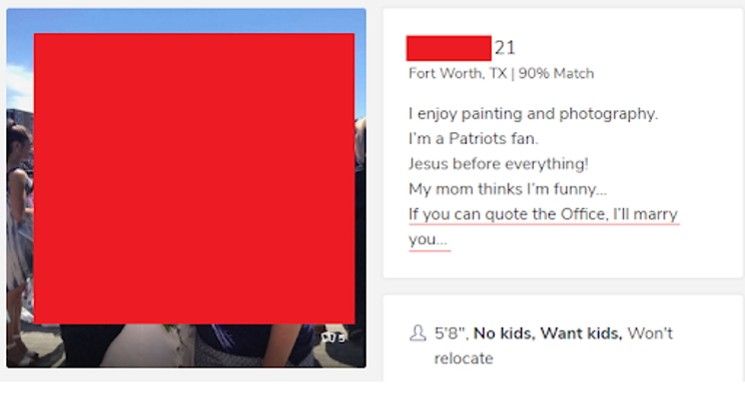 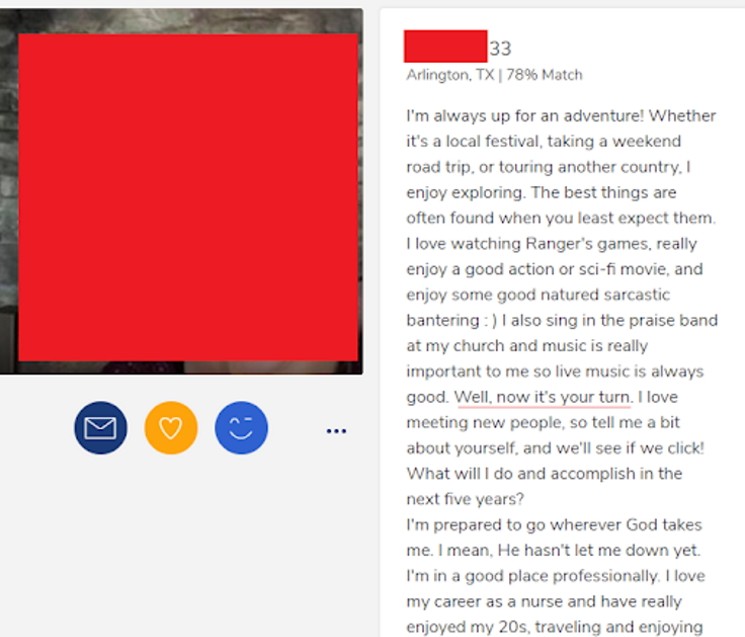 Christian Mingle
There are more paragraphs that couldn’t fit into the screenshot. Not a really good way to give someone the talking stick.
KEEP THE DALLAS OBSERVER FREE... Since we started the Dallas Observer, it has been defined as the free, independent voice of Dallas, and we'd like to keep it that way. With local media under siege, it's more important than ever for us to rally support behind funding our local journalism. You can help by participating in our "I Support" program, allowing us to keep offering readers access to our incisive coverage of local news, food and culture with no paywalls.
Make a one-time donation today for as little as $1.