St. Vincent at The Bomb Factory
Mike Brooks
Dallas has seen plenty of good shows this year. Whether it was St. Vincent destroying The Bomb Factory with her guitar and vocals or Tony Bennett showing us age doesn't matter, we were treated to an array of talent. Here are the 10 best we've seen so far in 2018, listed in chronological order.

St. Vincent
The Bomb Factory
Feb. 24, 2018
Dallas can have a complicated relationship with musicians who mature here and explode elsewhere. It was evident on a frosty February evening earlier this year, as the Dallas-raised Annie Clark — commanding the stage as St. Vincent — tore through an exhilarating set, mashing together guitar god wizardry with healthy doses of future-facing artistry, that local fans feel no trace of ambivalence about St. Vincent’s relationship to her former home turf. Clark spoke movingly about growing up, driving aimlessly around White Rock Lake, “waiting for something to happen,” and these reminiscences were met with roars of approval from the crowd. By fusing her past with her present, the relentlessly inventive artist in full command of her craft performed her biggest hometown gig to date, which lingers like a fond memory all these months later. Preston Jones

Wavves at Club Dada
Carley Elsey
Wavves
Club Dada
March 18, 2018
Wavves had been scheduled to play at Canton Hall, but in a last-minute change of mind, Parade of Flesh’s John Iskander decided to put one of the biggest bands in Not So Fun Weekend’s lineup in one of its smallest venues to ensure that the beach party vibe would also be an intimate one. With an 18-song set list, Wavves kept the crowd’s spirits up in the wake of a post-St. Patrick’s Day hangover at the close of the evening. There was so much stage-diving, however, that singer Nathan Williams had to remind fans that the monitors would fall over if fans jumped from them. When the band played its second-to-last song, “Post Acid,” Williams welcomed the ocean of beer being thrown around the crowd and onto the stage. Wavves is a band that takes beach partying seriously, and everyone was invited that night. David Fletcher

Lorde at American Airlines Center
Mike Brooks
Lorde
American Airlines Center
March 18, 2018
The musicians who elevate a show, whether it’s in a club, a concert hall or an arena, intuitively understand the power of mining the moments in our lives, reflecting and refracting them back at the audience. So it was with Ella Yelich O’Connor, better known as New Zealand-bred pop powerhouse Lorde, who captivated a sold-out American Airlines Center with material from her sophomore album, Melodrama. Fine-grained emotional anthems (like the pulsing hit “Green Light”) are her stock-in-trade, and not even a weird lighting glitch, which forced Lorde to effectively start the show over one song in, could detract from her ability to draw the adoring crowd into one indelible moment after another. The staging was plenty striking, but nothing could top Lorde’s vulnerability for sheer impact. “I’ve never made something before where I see myself so clearly,” she told the arena. Preston Jones

Beck at The Pavilion at the Toyota Music Factory
Mike Brooks
Beck
The Pavilion at the Toyota Music Factory
March 23, 2018
Armed with a set list skittering across his back catalog but with several nods to the here and now, Beck bent time like the veteran he is during his late March stop in the Dallas suburbs. The singer-songwriter is an infrequent presence on local stages — his last appearance had been four years earlier, headlining Edgefest 24 in Frisco; his last Dallas proper appearance was in 2006 at the dearly departed Gypsy Tea Room — but both artist and audience acted as if no time had passed. Much of that goodwill had a lot to do with the freewheeling collection of songs, stretching back to his breakthrough “Loser” and up through his latest hits, like “Wow” and “Colors.” The love could clearly be felt onstage. “[This is] making me feel like I need to come back this way more often — taking me back to the days of the Bronco Bowl,” he said. Preston Jones

Ho99o9 at Gas Monkey Bar ‘n Grill
Carley Elsey
Ho99o9
Gas Monkey Bar ‘n Grill
April 1, 2018
Ho99o9 (pronounced “Horror”) has done a lot to expand audiences' perceptions of everything that hip-hop can be, and its performance at Gas Monkey Bar ‘n Grill showed exactly how punk-rock hip-hop really is. Complete with live drums, abrasive fashion, mosh pits, onstage acrobatics, and lyrics delivered with the force and intensity of a machine gun, Ho99o9 sent audiences home with a new appreciation for the genre-bending music. From new protest songs like “Street Power” to a well-placed cover of Bad Brains’ “Banned in DC,” the group embraced defiance as tightly as it embraced fans, with vocalist Eaddy joining in with the mosh pit in the band’s finale. If you missed the Gas Monkey show, you’ll have another chance to join the resistance when Ho99o9 opens for Avenged Sevenfold on Sept. 1 at Dos Equis Pavilion. David Fletcher 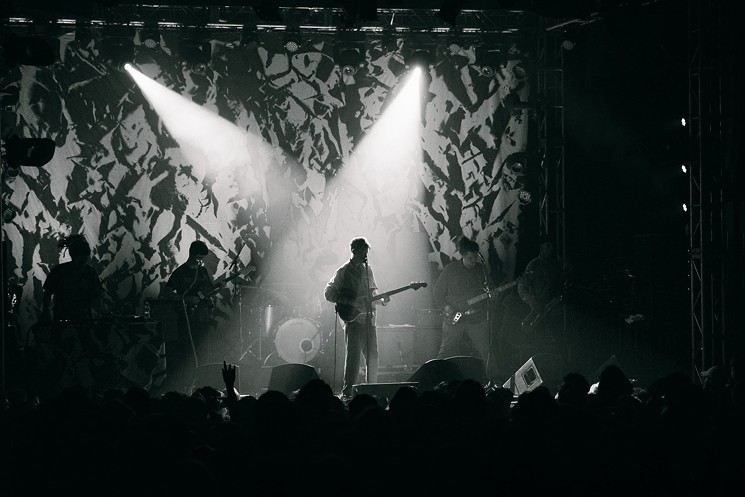 King Krule at Granada Theater
Mikel Galicia
King Krule
Granada Theater
April 11, 2018
In support of his latest work, 2017’s critically acclaimed album, The OOZ, King Krule played 19 songs, some from the current album and some from his 2013 release, 6 Feet Beneath the Moon, with a couple of rarities thrown in the mix. The April 11 performance marked the first time the reclusive King Krule (real name Archy Marshall) has brought his woozy blend of indie rock, punk-jazz, trip-hop and dark wave to the Dallas area. The loudest cheers came for King Krule’s third song, “Dum Surfer,” which topped critics’ best-of lists at the end of last year. The show faded through the remainder of the artist’s set, but fans saw a far more raucous performance than one might expect from King Krule’s recordings. When the show came to a close, there was nothing left but quiet applause and inaudible respect for what the crowd had seen. David Fletcher

Foo Fighters
Dos Equis Pavilion
April 21, 2018
Dave Grohl-led rock juggernaut Foo Fighters, another A-list act that doesn’t drop by Dallas terribly often, tore into the Dos Equis Pavilion earlier this year for its first local show in a decade. “Are you ready?” Grohl screamed at the sold-out crowd from beneath a wild, lengthy black mane of hair. “Are you fucking ready?” With a nearly three-hour colossus of rock that was as much endurance test as riotous evening out, the Foos bound together an audience of all ages: those old enough to remember the earliest art-pop days and those young enough to get a hefty dose of indoctrination, ensuring red-blooded rock ‘n roll endures for another generation. Armed with some vintage stagecraft — dig drummer Taylor Hawkins’ sky-high riser — and timeless tracks (the catharsis of “My Hero,” belted out by 20,000 gleeful fans, is highly recommended), Foo Fighters left a mark that may take another 10 years to fully fade. Preston Jones 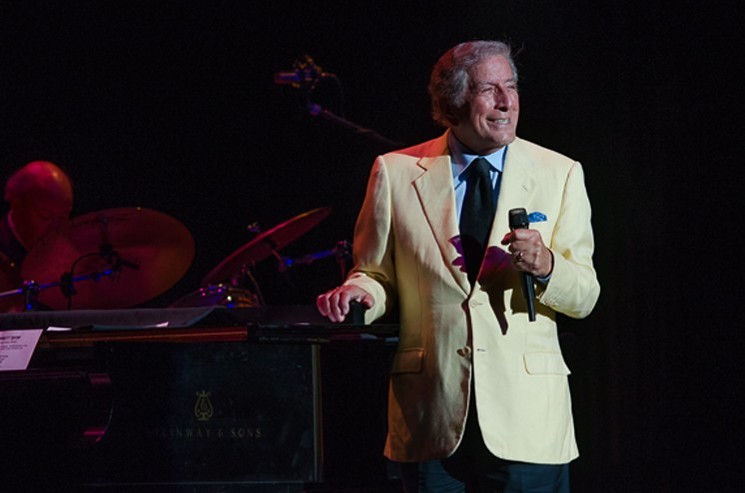 Tony Bennett
Winspear Opera House
April 26, 2018
There comes a point, particularly for an artist who’s endured for decades, at which it becomes mandatory to see that person any time he or she performs near you. Tony Bennett is such an artist, astonishingly vibrant at the tender age of 91 and capable of so many incredible moments that his performance feels like one big goose bump. His deft renditions of songs penned by nearly every big-name composer you could think of — Gershwin, Berlin, Kern, Styne — are coupled with a backing trio that cushions his singular voice like velvet. The audience at the Winspear Opera House understood the gift it was getting and reciprocated with five standing ovations. But, as always, Bennett saved the best for last, stepping to the foot of the stage and singing “Fly Me to the Moon” with no amplification. His voice, as it has throughout his career, soared into the darkness, strong, clear and life-affirming. Preston Jones

Slowdive
Granada Theater
April 27, 2018
While Jack White didn't want you to use a smartphone at The Bomb Factory on the same night, Slowdive let the audience enjoy however it wanted to. Returning to Dallas for the first time since the early 1990s, the band played all of the songs it fans wanted to hear. The classic old songs meshed perfectly with the newer songs, and the band played incredibly well. The light show was on point, too — psychedelic and dreamy, so you could take a trip without being on drugs. The overall show was worth the wait and in a perfect venue for the shoegaze pioneers. Eric Grubbs

Jeremy Enigk
Club Dada
June 15, 2018
While celebrating his first solo album, Return of the Frog Queen, Jeremy Enigk returned to Dallas for the first time in many years. Although it wasn't as grand as Enigk wanted it to be (in a concert hall with a 21-piece orchestra), he and his small band delivered a spectacular show. He did the album from start to finish and encored with other solo material, and it was not disappointing that he stayed away from songs by Sunny Day Real Estate and the Fire Theft. The songs were what they were: elegiac and hopeful, played by people who were grateful to play them. Enigk is in a much better place in his life, and he is very excited about playing out again. Dallas got to see the beginning of something new from this heralded singer-songwriter. Eric Grubbs
KEEP THE DALLAS OBSERVER FREE... Since we started the Dallas Observer, it has been defined as the free, independent voice of Dallas, and we'd like to keep it that way. With local media under siege, it's more important than ever for us to rally support behind funding our local journalism. You can help by participating in our "I Support" program, allowing us to keep offering readers access to our incisive coverage of local news, food and culture with no paywalls.
Make a one-time donation today for as little as $1.