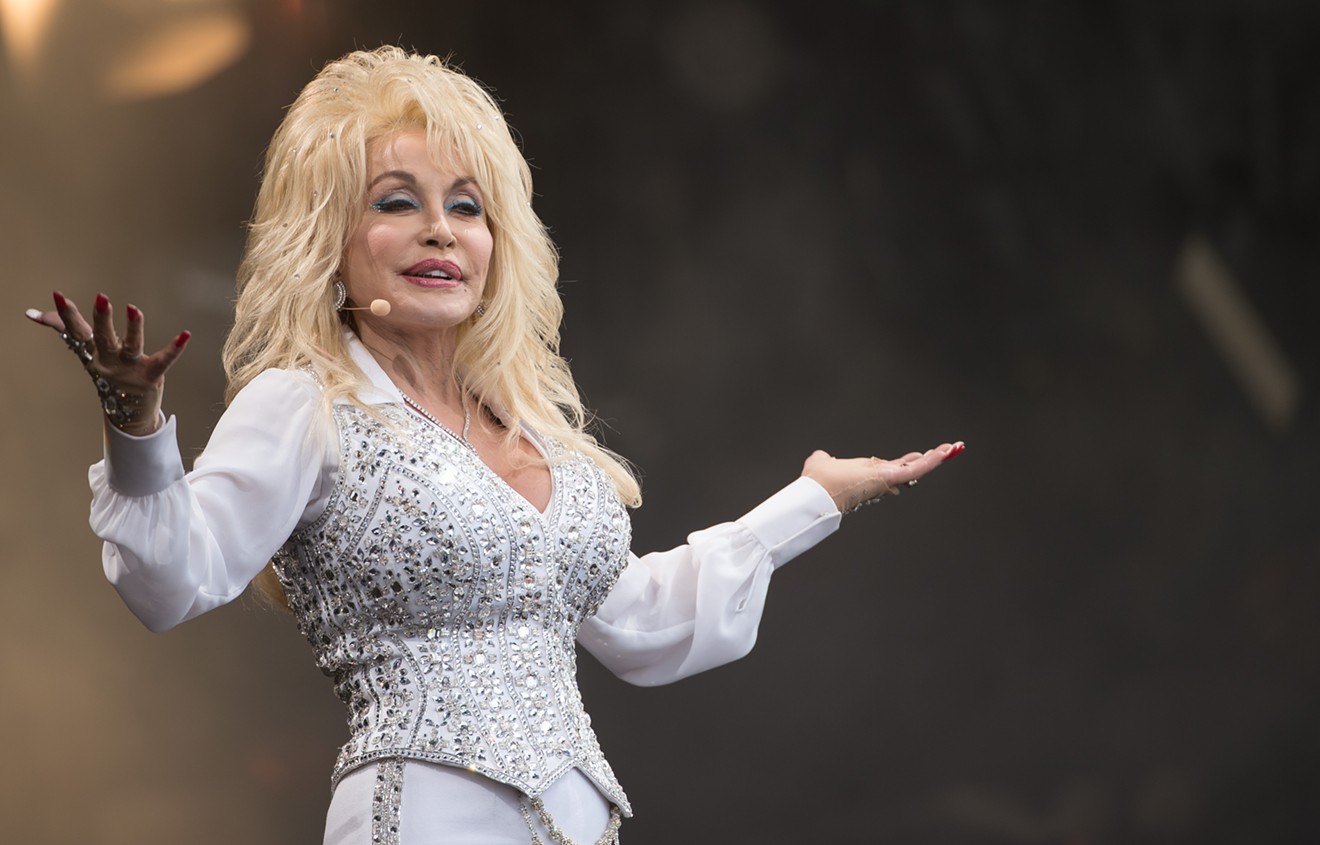 A now unemployed artist attacked queen Dolly Parton this week, and he's not the only one whose racism is showing. Ian Gavan/Getty
Last week, a sexist and racist Facebook post circulated the internet. While that’s sadly commonplace, this particular message was directed at none other than the queen of country music, Dolly Parton, which qualifies as treason. Stuart Baker, otherwise known as Unknown Hinson, thought the best use of his time was to attack the country legend in an effort to belittle the singer for her recent comments in support of Black Lives Matter.

Parton doesn’t need anyone to stand up for her, certainly not over a Facebook post from someone she’s likely never heard of before. But what’s important to point out here is that the simple notion that all people are created equal, the message at the core of Black Lives Matter, has really brought out some celebrities’ true, and favorite, colors — white.

Meanwhile, other well-known names, like Seth Rogen, have hilariously taken to social media in support of the BLM movement by responding to every “All Lives Matter” commenter with a personal “fuck off.”

Baker was a voice actor for the Adult Swim cartoon Squidbillies and had a music career as a Dracula-esque rockabilly guitar player who went by the moniker Unknown Hinson. We use the past tense because, after his controversial post, he was fired from his cartoon job, and, according to a now-deleted Facebook post, lost his endorsements and, potentially, his music career.

His since-deleted post read: “So, now this freak titted, old Southern Bimbo is a BLM lover? Remember, slut, Rednecks made you a Millionaire!”

The post was in response to Parton’s Billboard magazine interview, in which she said: “Of course Black lives matter. Do we think our little white asses are the only ones that matter? No!”

Look, Unknown whoever-he-is can have opinions, of course. But he must have known what would happen next. Another since-deleted post read:

“Folks, I’ve been fired from my Cartoon Show, lost my endorsements and my chance of ever being booked by any Music Venue as Unknown Hinson again. I just hope you a-holes are happy you took a good Man and talent down. You succeeded. Be proud that you ruined a person’s life all because of [the] Freak Show called ‘Dolly Parton and BLM.’ Thanks a lot. I gave my best to you assholes for over 30 years. I guess you just love to kick someone when they’re down. That’s so twisted and perverted. Again, thanks! I’m [sic] remember you bastards!”

Odds are we won't remember him.


One unexpected ally of the BLM movement is Trump adviser Kellyanne Conway’s 15-year-old daughter Claudia, who shares anti-Trump and pro-BLM content on TikTok. One instance included the caption: "I love trump... but replace 'love' with 'think that we should extinguish,’” and called for the arrest of the police officers who shot and killed Breonna Taylor.

Claudia gained an enormous following in the past few months, and after she posted that she was seeking emancipation from her parents, Kellyanne Conway announced she’s leaving her position at the White House to focus on her family.

One totally expected All Lives Matter proponent is none other than Trump supporter and rebel flag lover Kid Rock, who, at a 2017 concert, told his audience to “call me racist” because he didn’t like Colin Kaepernick kneeling during the national anthem. Kid Rock is also a guest at this year’s Republican National Convention.

Billie Eilish performed at the Democratic National Convention last week, premiering the song “My Future,” but not before giving a speech that was aimed at encouraging people to vote. She also took to Instagram in June and ripped apart the All Lives Matter movement. One part of the post reads: "This is not about you. Stop making everything about you. You are not in need. You are not in danger."

"It's a Marxist, anti-American … And I don't even … Anarchy — obviously, their modus operandi is anarchy, but there's something much deeper and more evil about them," Nugent said of BLM in a recent radio interview.

Janet Jackson has used the hashtag #alllivesmatter; others who have promoted the idea on Twitter include rapper Fetty Wap and actress and singer Keke Palmer. Actress Jamie Lee Curtis posted "All Lives Matter" back in 2016 on Twitter, though all that Activia seems to have reset her system: Her current Instagram account includes a post about the racially motivated lynching of Emmett Till, with the hashtag Black Lives Matter. In recent weeks, she has endorsed Joe Biden and Kamala Harris.

Never one to make things boring, Rogen took to Instagram to promote BLM, and told his followers: “If this is a remotely controversial statement to you, feel free to unfollow me.” And what followed was Rogen gold. “I like All Lives Matter,” one commenter said, to which Rogan replied, “I like fuck you.” Several people commented that they were unfollowing the comedian, but the actor simply replied with a bunch of “fuck you’s” and “quit watching my movie’s.” Never change, Seth.

Scott Baio, best known for playing Chachi Arcola on Happy Days, who is also a speaker at the RNC, said in a Tweet regarding BLM: “So your theory is that ONLY black lives matter? NOT ANY OTHER RACE? That is racist, bigoted,& irresponsible. #AllLivesMatter.”

Looks like somebody missed the point. Yo, Chachi, let someone with talent explain it to you.

Nobody’s going to agree on politics, but it’s certainly a shame that we can’t all agree that in this moment, in 2020, unarmed Black men and women are needlessly dying at the hands of law enforcement faster than you can say “Make America great again.”
KEEP THE DALLAS OBSERVER FREE... Since we started the Dallas Observer, it has been defined as the free, independent voice of Dallas, and we'd like to keep it that way. With local media under siege, it's more important than ever for us to rally support behind funding our local journalism. You can help by participating in our "I Support" program, allowing us to keep offering readers access to our incisive coverage of local news, food and culture with no paywalls.
Make a one-time donation today for as little as $1.