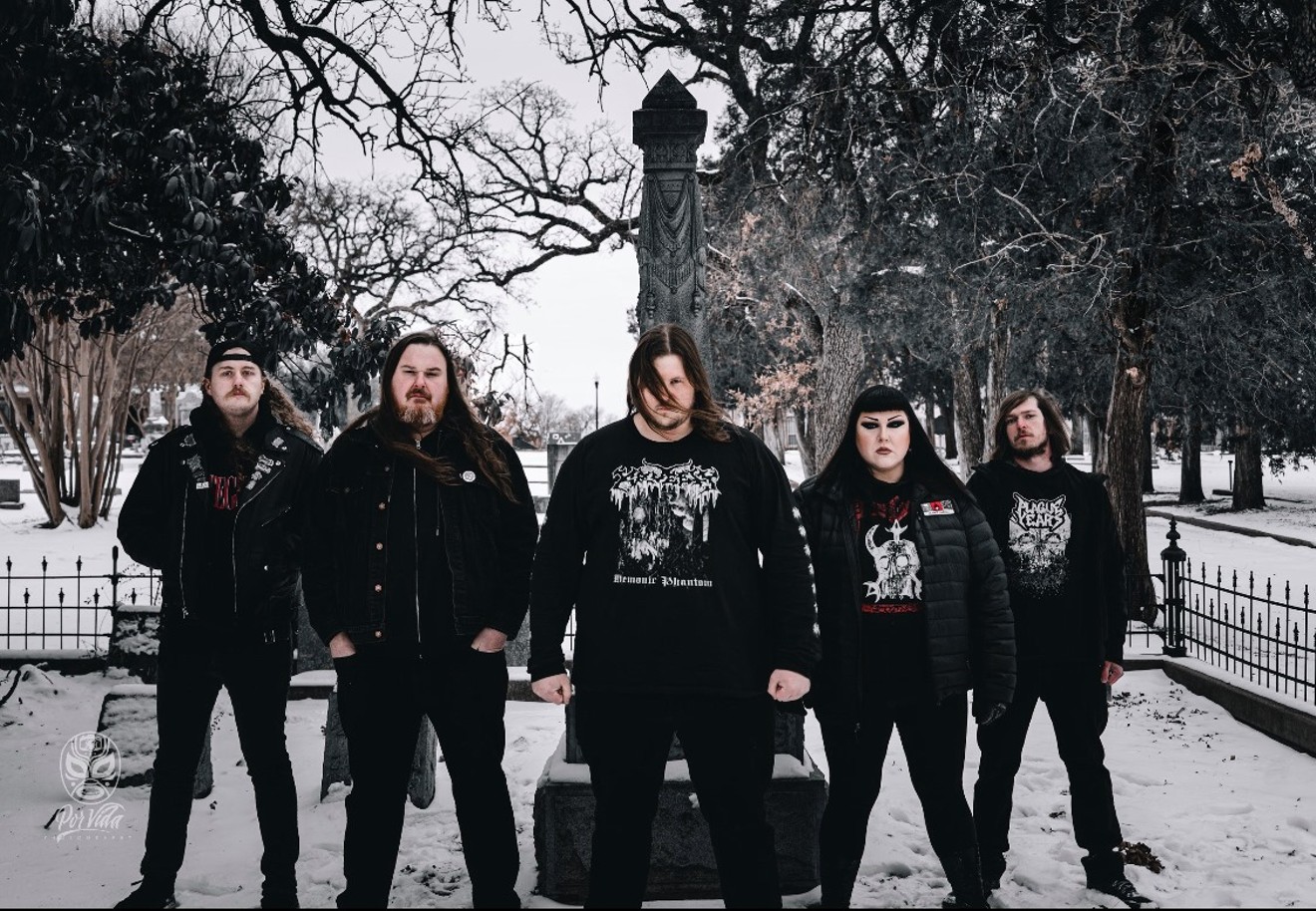 Arlington's Frozen Soul just signed a three-record deal with a label. Now they can wash down the taste of success with their own Division Brewing beer. Adan Cedillo
Wade Wadlington, the owner of Division Brewing and GROWL Records in Arlington, isn’t exactly a fan of death metal. He's partial to stoner rock. But Arlington is the home base for Frozen Soul, which rehearses down the road from his brewery. Now, Wadlington is more than a fan of the band's, but a collaborator. Frozen Soul is the inspiration behind one of his company's beers.

The rising death metal band recently signed a three-album record deal with one of Sony Records' subsidiary labels, Century Media. And Wadlington says the band gave him a fresh outlook on the paradigm of death metal.

The declaration comes a surprise to the members of Frozen Soul, who have gathered across a few tables inside the brewery-adjacent Growl Records building to escape the noise of the bustling Wednesday night trivia event on the shared Division Brewing patio.

“Death metal isn’t something I’m really into,” says Wadlington, who's rather enjoying watching the party go gaga over the brewery’s Knotty Boyse boysenberry sour beer concoction. “I have listened to enough [music] that I feel I can comment on quality-sounding recording and musicianship. Frozen Soul's LP works for me ... It made me a fan, and I’m happy to make a beer.”

That LP is Crypt of Ice, the band’s major label debut, which was released in January, and has since been lauded as a stellar heavy-as-hell debut. The young outfit plays by the motto “K.I.S.S.” (or “Keep It Simple Stupid!”), made evident in the band’s satisfying Stone Age delivery which has struck a chord with music fans far and wide.

Munday is frequently the originator of ideas that become riffs, which in turn become Frozen Soul songs, before the careful deliberation, cherry-picking and transfiguration by the other members.

Wadlington’s initial distaste of death metal is something the band gets.

“Death metal can be very abrasive at times,” says guitarist Chris Bonner. “For me personally as a kid — especially being into hardcore and punk — some of the death metal bands with song titles like ‘Raped With a Knife’ can be very off-putting.”

“Back in the day when metal was new, people were trying to push boundaries, so I can get that attitude to an extent,'' he says. “There is no need for that anymore.”

Frozen Soul’s singer Chad Green joins in on the discussion.

“That’s one of the things that got me into [death metal bands] with a punk ethic," he says. "It doesn’t have to be some shitty misogynistic thing. I love the riffs, but I was never into the kind of music where people try to be as edgy as possible.”

On May 29, the band will be holding a record-signing event at CD Warehouse in Arlington followed by the unveiling of Frost Hammer, the new beer from Division Brewing, inspired by Frozen Soul. It may come as a surprise, however, that the beer isn’t as dark, brooding and malevolent as Frozen Soul’s songs. The band is actually made up of a fun-loving group that just so happens to have a bit of a sweet tooth.

Their Frost Hammer beer is a raspberry/blueberry milkshake double IPA that pushes the envelope at about 10 to 12 percent alcohol volume.

“It’s going to be nice and sweet and it’s going to kick your ass if you drink too many of them,” Wadlington says with a chuckle.

Of course, it wouldn’t be a Frozen Soul beer unless the thing was actually frozen. So expect to find it in slushy form as well.

The show will be Frozen Soul’s first live performance since the onset of the pandemic, and their first since the release of Crypt of Ice. The road to that LP release on Century began in February 2020, when Mike Gitter, vice president of Century Media A & R, flew down to catch Frozen Soul open for Vader at Gas Monkey Bar and Grill.

“[Gitter] is kind of a legendary dude,” Bonner says. “He worked for Roadrunner Records all through the '90s. He actually flew out to catch Frozen Soul in Dallas and that was the day he decided to sign the band.”

“Being on a label associated with Sony Records is huge, so I personally thought that they would be pushing a lot of buttons. The inside scoop is that that’s not the case." – Chad Green


Green adds that he was duly impressed with the gift box Gitter brought with him as part of the band’s signing bonus.

“He brought us a huge package of the book he wrote and the Straight Edge fan zine collection," Green says. "He gave us tons of records and CDs and stuff. It was awesome.”

The signing came with a few surprises for the Frozen Soul frontman.

“Being on a label associated with Sony Records is huge, so I personally thought that they would be pushing a lot of buttons," Green says. "The inside scoop is that that’s not the case. You still have to go find all those same people. It's just now they actually respond to your email."

As far as money goes, Frozen Soul maintains they are sticking with an old DIY concept: the band jar. They are playing long-ball by reinvesting everything they make back into the band.

The recording of Crypt of Ice was already underway when the initial pandemic lockdowns began, rousing speculation among the group that the world was in fact ending now that they had finally earned their hard-fought record deal.

What it really meant was they were unable to tour to promote the album. So the band got creative and released more videos than they probably would have otherwise. The pandemic delays also gave them time and a reason to organize the beer release initially. Now that vaccinations are rolling out and restrictions are easing up, Frozen Soul is gearing up to tour relentlessly, starting off by playing four Texas dates in August with Goat Whore and Necrofier.

The band has also lined up two full U.S. tours that are “long as fuck” with a couple acts that haven’t yet been announced. But the powers that be have aligned in Frozen Soul's icy corner for the time being. They'll be death metal millionaires in no time, just as planned.
KEEP THE DALLAS OBSERVER FREE... Since we started the Dallas Observer, it has been defined as the free, independent voice of Dallas, and we'd like to keep it that way. With local media under siege, it's more important than ever for us to rally support behind funding our local journalism. You can help by participating in our "I Support" program, allowing us to keep offering readers access to our incisive coverage of local news, food and culture with no paywalls.
Make a one-time donation today for as little as $1.