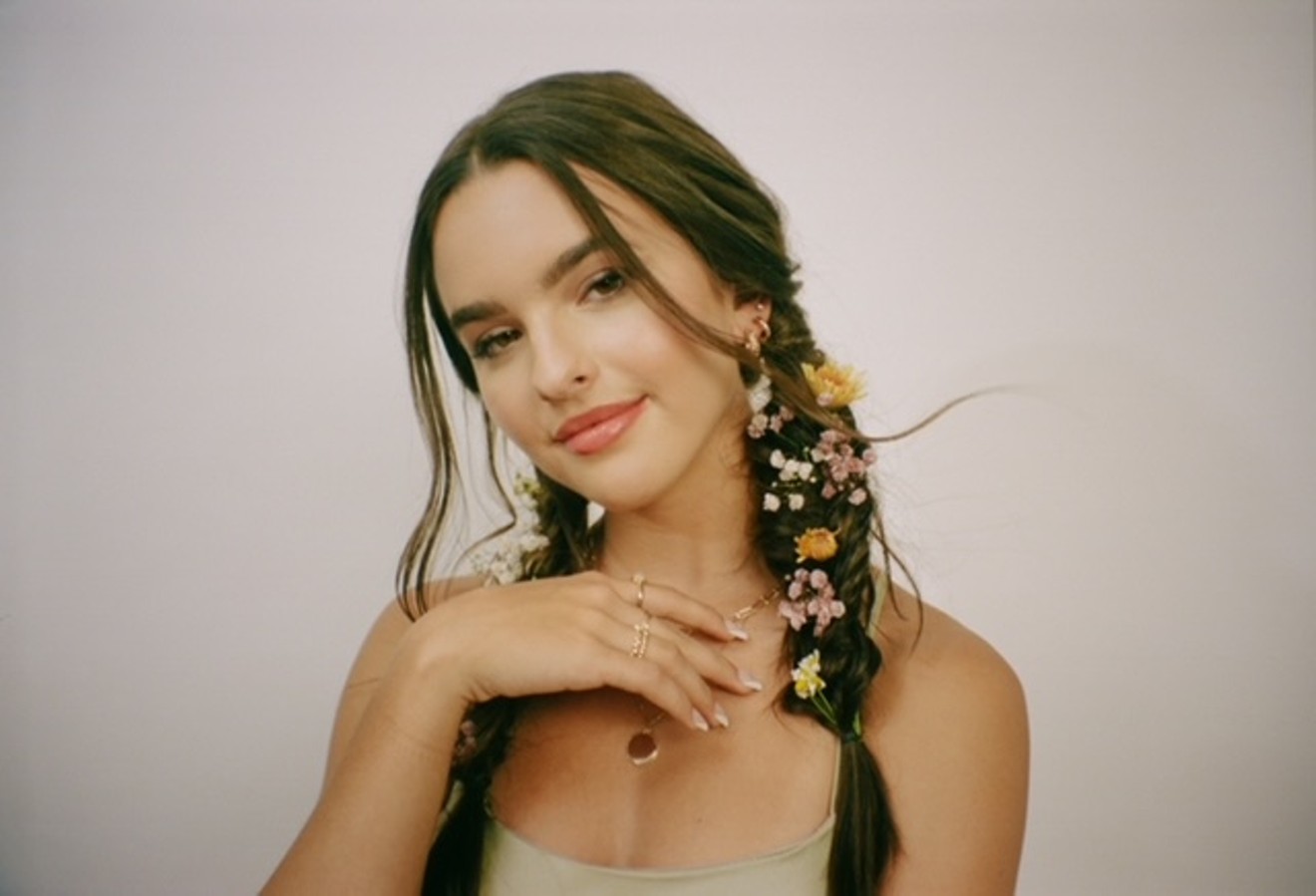 Jenna Raine is coupling up, breaking up and letting it all out on TikTok. Caity Krone
On her latest single, “Not Again,” 18-year-old Jenna Raine confidently kisses off an ex who comes around after she finds her own happiness. In the song’s accompanying music video, the Southlake native dances against a white screen as memeable video clips are screened to her side.

One of the clips is captioned with “When your ex breaks up with you before your vacation and now you’re planning one for yourself.” Another sees Raine crying, and is captioned with “How my life was,” which then transitions to a clip of her dancing, which reads, “How my life is now.” The music video is a tribute to TikTok, the place where it all began for Raine.

She wrote “Not Again” with songwriter Casey Smith following a session in which they were bouncing ideas back and forth.

“She was like, ‘Hey, tell me about what you're going through,’ and I was just literally talking her ear off, trying to get some song info out for the day,” Raine says. “... There was a guy that I liked a long time ago, and he had reached out. I was like, ‘He wants me back. Oh no, not again. He was just a guy that liked me who tried to make this whole romantic thing, while I was with my friends out having fun, and it was just very annoying and irritating. And even though I kind of liked him when I was younger, I just knew I was completely over it, and he just wasn't taking a hint.”

Hot off a freshly signed deal with Warner Music Group, Raine is a killer songwriter gearing up to be a pop star. She grew up in Texas, and her love of music began when she was 4 years old, when she and her older sister, who was a high school senior at the time, would drive around town listening to Taylor Swift.

She and her family attended Gateway Church, and Raine wanted to be a worship leader. But she decided to shift in a new direction in the third grade, when she sang Adele’s “Rolling in the Deep” at her school’s talent show.

“I think my mom just about had a heart attack when I told her I was going to sing,” Raine says. “Nobody in my family really had any musical talent, so it caught everybody off guard. But I loved singing at church, and I loved listening to the radio with my older sister growing up. That’s where it all started.”

There was no denying that Raine had vocal talent, and her parents signed her up for lessons at Septien Entertainment Group. When she was 10 years old, Raine briefly joined a girl group called L2M, which was short for “Listening to Music.” She landed the gig through a casting call looking for a group to perform a song for the Lego Friends movie.

Producer Tim Bird had plans to make the girls pop stars, and they released several stand-alone singles. L2M has since disbanded, and Raine says she still has nothing but love for her former bandmates.

“We grew so close being in that group together,” she says. “It was one of my biggest blessings, getting to meet some of my closest friends, especially in this industry, because sometimes it can be a harsh world. But meeting people like them just makes it just so memorable and so beautiful. We're all in different parts of the country, so it's really hard for us to meet up. But last year, I flew out two of them and we all hung out and we binge watched the second season of Outer Banks together. That was so fun.”

Raine began acting and has gotten a few small film roles. She'd taken songwriting lessons from songwriter and producer Jonathan Camacho shortly before he left Septien Music Group. In the eight weeks she was able to work with him, he challenged her to write 100 songs.

“He told me that before I could write 100 songs, I wouldn't be a decent songwriter,” Raine says. “It would take 100 songs to become a decent songwriter — not even good, but decent. And during quarantine, I really had nothing else to do. I was in the middle of filming a movie with songwriter Ryan Tedder, so I couldn't release music. I was determined to make something pop off on TikTok. I was like, ‘I'm gonna make this a challenge, make this kind of a serious thing and do what Jonathan told me to do three years ago, and write 100 songs.’ So that's exactly what I did.”

"I was determined to make something pop off on TikTok. I was like, ‘I'm gonna make this a challenge, make this kind of a serious thing." –Jenna Raine


After posting song clips on TikTok, Raine garnered a large following. Her song “See You Later (Ten Years)” was a game changer. According to Raine, this was the 46th song she wrote of the 100-song challenge, and she wrote it after someone had commented on one of her videos challenging her to write a song about falling in love with the right person at the wrong time.

The song went viral, which was something Raine says she didn’t fully get to process at the time as she was in the middle of filming a movie called Camp Hideout. But she remembers coming home from filming and friends telling her that their friends knew all the words to “See You Later (Ten Years).

Raine drew from real experiences when writing the song, which is about her boyfriend of two years. He is not the same guy from “Not Again.”

“We were kind of doing that ‘talking’ thing,” Raine says of her new muse, “and we didn't really get a full shot at becoming a couple, because we were so young, and I knew he was the right person at the wrong time. I had personally gone through that. So I went back into those feelings, because I wasn't going through it at the moment, but I could just go back a year and a half beforehand, and take those emotions and put it into the song. So this one in particular is very close to my heart.”

Raine recently graduated from high school. She has plans to move to California at the end of the summer, but in the meantime, she enjoys having time to play some sand volleyball and pickleball with friends and family, getting her fix of all things Texas before heading west and focusing on music.

But before she locks into album mode, Raine plans to give fans a preview of what she’s been working on over the past year.

“I can say there's going to be an EP coming towards the end of the summer, which is very exciting,” she says. "I've been waiting to put out a bit of a bigger project for a very long time, but I'm trying to be very conscious about what songs come out and what makes sense with the songs that I'm thinking of releasing. I'm excited to talk to people about what songs I'm going to choose, and I'm kind of going to let TikTok decide for me.”

Watch "Not Again" below:
KEEP THE DALLAS OBSERVER FREE... Since we started the Dallas Observer, it has been defined as the free, independent voice of Dallas, and we'd like to keep it that way. With local media under siege, it's more important than ever for us to rally support behind funding our local journalism. You can help by participating in our "I Support" program, allowing us to keep offering readers access to our incisive coverage of local news, food and culture with no paywalls.
Make a one-time donation today for as little as $1.