By Eating at 48 Dallas Taquerias in 24 Hours, One Man Hopes to Help Addicts

Jon Daniel is about to embark on a mission to eat at 48 Dallas taquerias in 24 hours. Why? Well, there's actually a pretty great — and heartbreaking — reason for this taco quest. Kathy Tran
Through years of rehab, relapses and second, third and 40th chances, there is one life raft that parents of addicts cling to: hope.

Hope that this counselor, this medication, this stint in rehab sticks. Hope that this rock bottom will be their offsprings' last, that they'll miraculously wake up one day and feel tethered to something, anything other than drugs and alcohol.

Hope that the future isn't just an abstract, far-away land where their child might never set foot.

For Jon Daniel, that life raft sank the morning of Jan. 18, 2017. Sitting in his car outside Houndstooth Coffee at Sylvan Thirty, he got the call he always knew might come. His son Jordan Daniel had died of an overdose the night before, just three days before his 23rd birthday.

Jordan had recently finished his fourth stint in rehab and was holding down a job as a porter at the Bomb Factory. For a lifelong musician and metalhead, the job was perfect, Jon says. It took a lot of effort to keep the job as Jordan was homeless, living out of his car and still struggling with the depression and anxiety that plagued him since adolescence. 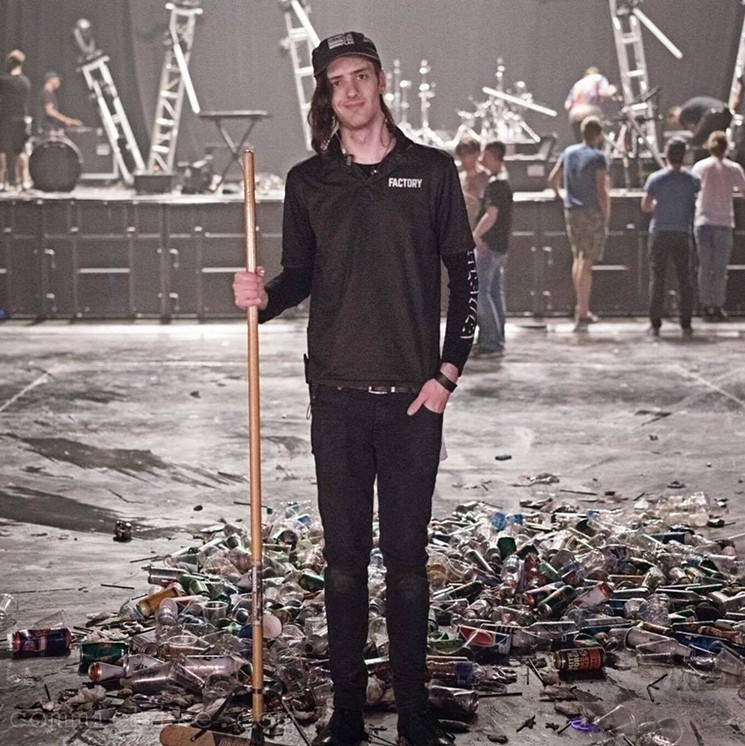 Jordan Daniel worked at the Bomb Factory, a dream job for this avid musician and metal-lover, until he died in January 2017, just a few days shy of his 23rd birthday.
Mike Brooks
"I had stopped a lot of the financial support, because it comes to be a point where they have to hit rock bottom," Jon says. "That’s the conventional wisdom, which I think is right."

But Jordan had been clean for a while, Jon says. He was doing better.

Then his body was found in an apartment off Haskell. Toxicology reports show Jordan died of an overdose of heroin, and meth and ecstasy were also found in his system, Jon says. Jon believes Jordan succumbed to a common scenario for addicts: After a stint clean of heroin, he relapsed, took more than his body could handle and overdosed.

Regret is dangerous for people who've lost loved ones to addiction — regret for the things they did and didn't do, regret for the tough love and the times they gave in. Jon Daniel knows he did the best he could for Jordan. But he felt a tinge of sadness in not knowing, until after Jordan's death, about Foundation45, a Deep Ellum nonprofit that provides mental health and addiction services to musicians and creative types, often under-insured people who struggle to afford health care.

"If I’d known about Foundation45, that would have been a perfect place for Jordan, but I didn't know," Jon says. "I thought to myself, if Jordan was working a Monday night show, he was probably walking straight by that place. But he didn't know. So I thought, I gotta do something about that."

In talking to some food journalist friends, Jon found an unconventional way to lift Foundation45's profile and raise money for the organization at the same time: He's going to eat tacos. A lot of them. 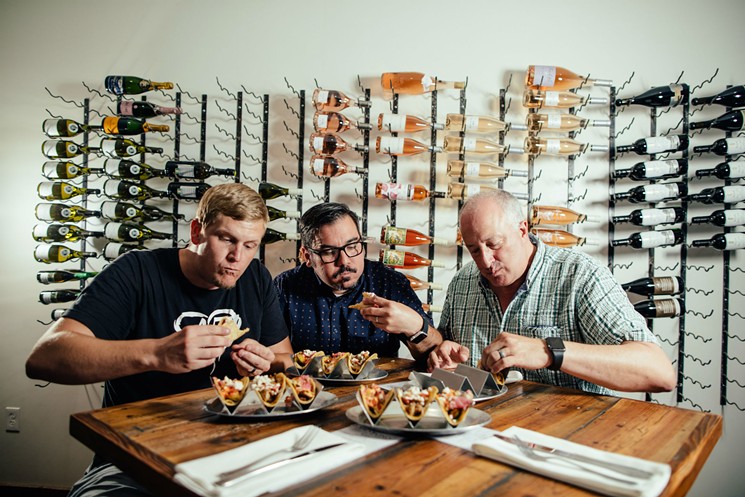 They will have about 30 minutes at each taqueria. With help from Ralat, Jon has created a detailed map of each place they'll visit and when. It may seem impossible to eat at 48 taquerias in 24 hours, but Jon Daniel is no ordinary man, and this isn't his first taco-eating rodeo.

There's a reason people call him Big Jon Daniel. At 6-foot-7 and 295 pounds, he towers over everyone at the concerts he frequents as an ardent supporter of Dallas music. And as a friend of Ralat and Strickland, he's eaten more tacos than the average Dallas diner. 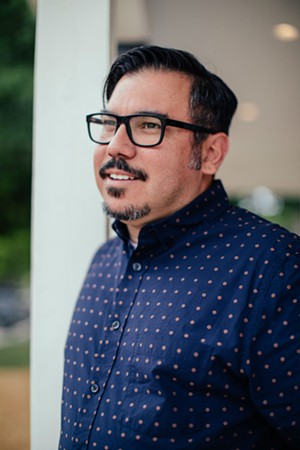 So Daniel often takes the wheel, crossing the state with Ralat and Strickland to eat at and photograph taquerias, one after another, all day long.

"The real reason that I even saw this as possible is that I've been lucky enough to travel with Jose as he's doing research for the book, and there are days when we’re going to 10 to 15 taquerias a day," Jon says. "The logistics of it seem possible because I’ve already done it with him, and it was not out of the realm of possibility."

Daniel created a fundraising page where people can donate money in support of Foundation45's new Jordan Daniel Fund, created in his son's honor. Jon hopes to raise $10,000 this year — as of Monday, July 30, he's raised more than $6,000 — and wants to host the taco crawl annually, perhaps involving others in the fundraising and taco-eating.

"Nothing like this has ever been done before, and it’s fun," says Ralat, who helped organize the fundraiser. "It needs to be fun. Tacos are fun, and they're a force for good."

But this fundraiser isn't just about Jordan Daniel or Foundation45 — it's about tacos. Specifically, the Dallas taquerias that form a huge part of Dallas cuisine. Of the 48 taquerias Jon is visiting, 45 are within a four-mile radius of the center of downtown, he says.

"That just shows you the breadth of places that are really available," Daniel says. "We’re hardly going south of Jefferson and we’re hardly going north of Mockingbird, east of Fair Park or west of the tollway. There’s just a ton of places to go. There’s only a few places we’re going that can be considered national chains. We really wanted to focus on people that love tacos."

Jon Daniel gets in a practice run at Taco y Vino in Bishop Arts.
Kathy Tran
"It allows us to express the range of possibilities of any one place — in this place, Dallas, which is historically dismissed out of hand because it’s Dallas," Ralat says. "But the best taqueria in the entire state is in Dallas."

Jon knows that eating 48 tacos in 24 hours is tricky.

"My commitment is to go to each taqueria and eat some of the taco," he says. "I’m not gonna commit to eat 48 tacos, because that’s insane. The ones I like, I’ll eat them all. The ones I don’t like, I’ll eat a couple bites." To find out which tacos fall into the former category, taco enthusiasts can follow the crawl in real-time on Foundation45's Instagram.


"Tacos are fun, and they're a force for good." -Jose Ralat

Daniel also pushes back against people who, upon learning of the taco crawl, warn him that he's going to get sick.

"I think the idea that Mexicans are dirty is racist, and I don't buy into it," he says. "Of course I'm gonna need Tums. I'm gonna need bottled water. I'm not worried about eating bad food or getting sick, because the truth is, just by the fact that there’s 48 places I can eat within four miles of downtown tells you there’s a big demand and easily substitutable supply."

If he suffers gastrointestinal distress, Daniel says, it's because of quantity, not quality.

"In our travels, I have learned there’s a propensity for starting out strong, and then with palate fatigue and poor planning, it’s diminishing returns," Ralat says. "He’s gonna want to eat all of the tacos early on. But he’s been training for this."

Preventing the tailspin
Three times a week in Deep Ellum and Oak Cliff, Foundation45 offers free group counseling for anyone who needs it, not just musicians and artists and service industry folk. The organization also helps those who need it most get access to free and affordable individual mental health care. One of their mottos is "Unfuck yourself," which speaks a lot to the type of people Foundation45 wants to help. But the people who need it the most, like Jordan Daniel, don't always find out about the resources available to them.

Even though 24 Hours of Tacos hasn't happened yet, it's already getting attention and has become the group's most publicized fundraiser. (Foundation45's annual Deep Ellum Water Balloon Wars fundraiser is Sunday, Aug. 12.)

"It seems to be taking on a life of its own," Van Oflen says.

"I’m already thinking about next year," Jon says. "Next year, I expect we might be able to do something like a shotgun start so people can be on the schedule like a half-hour behind me, so that way, we open up the more people who maybe want to do it."

Organizing this fundraiser has given Daniel, who sells cables and chargers for cell phones to major retailers, a method to focus his grief in a way that not just raises money for a worthy local nonprofit but also raises the profile of the independently owned Dallas taquerias that quietly feed so much of this city. He has a passion for local — local bands and businesses, in particular. A huge coffee buff, Jon frequents more than a dozen coffee shops every week, visiting several a day whether he's here in Dallas or traveling for work. With 24 Hours of Tacos, he's delving into more than one thing that he feels passionately about.

"My goal was to sort of re-engage, but I wanted to find a way to re-engage that I felt like was having the maximum impact based on my sort of weird skill set," he says.

Jordan Daniel is gone, but his father is still trying to help addicts, even if it's too late for his son. He thinks often of a metaphor that crossed his mind frequently when Jordan was still alive.

"You go down the list of A then B and C to see what works. You’re trying everything that you can. You do all the things that are in your power because he’s your kid, and you try everything until you’ve exhausted every resource. I wasn’t successful. The plane hit the ground. But I feel pretty good that I did everything that I possibly could. And he knew that."
KEEP THE DALLAS OBSERVER FREE... Since we started the Dallas Observer, it has been defined as the free, independent voice of Dallas, and we'd like to keep it that way. With local media under siege, it's more important than ever for us to rally support behind funding our local journalism. You can help by participating in our "I Support" program, allowing us to keep offering readers access to our incisive coverage of local news, food and culture with no paywalls.
Make a one-time donation today for as little as $1.