Antone's Sandwiches from Houston are Rolling into DFW 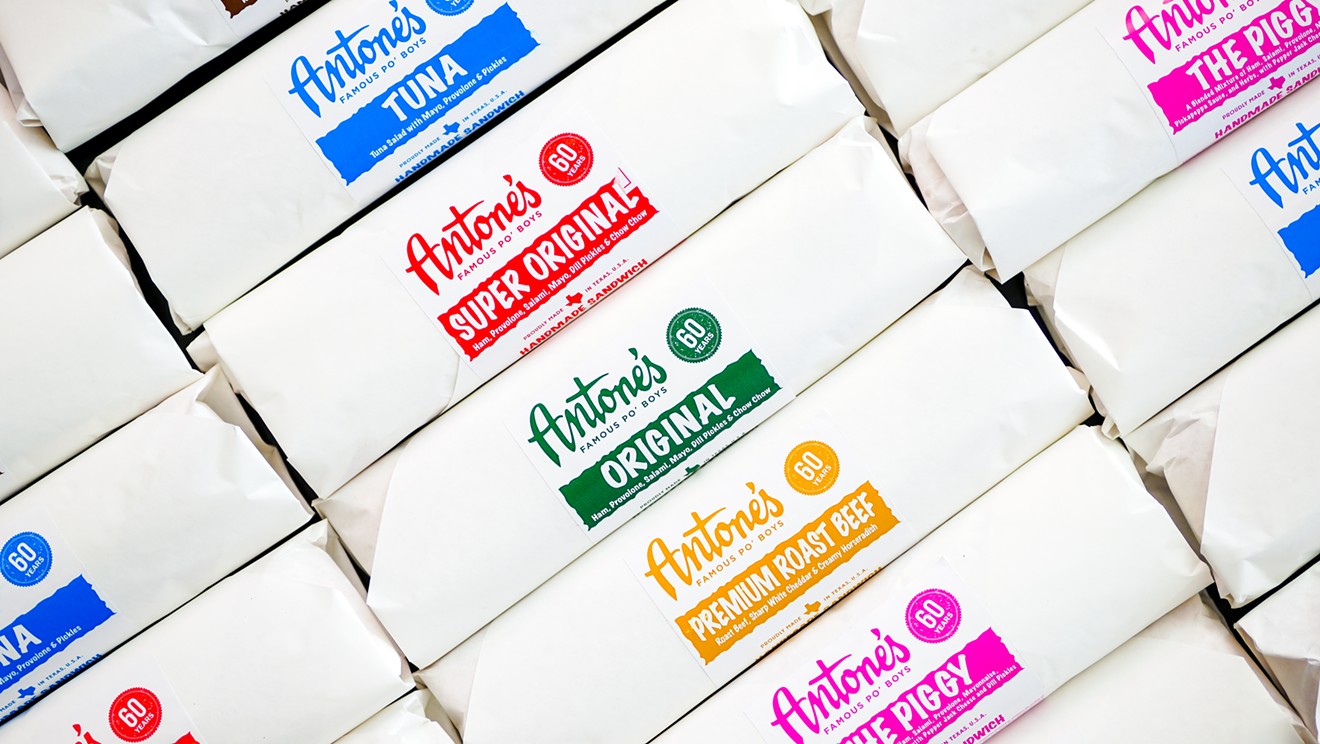 Look for these little missiles in the deli section at select Kroger, Tom Thumb, Albertson's and Market Street Stores. Courtesy of Antone's, photo by Dylan McEwan
Antone's of Houston is a bit like the Jimmy's in East Dallas in terms of an import grocery store, but their sandwiches more closely resemble Antoine's Foods on Harry Hines Boulevard. If neither of those local spots quells a hankering for a sandwich, you'll soon have another option.

Antone's Import Co. was founded in Houston in 1962 by Jalal Antone, the son of Lebanese immigrants. In addition to groceries, they serve grab-and-go sandwiches that became somewhat legend.

The sandwiches are pretty straightforward. They all come on a signature soft white hoagie-like roll with a slightly crispy exterior. Their Original has a modest amount of ham, salami, provolone with a chow chow relish (very similar to Antoine's), mayo and pickles. There's a Super Original with extra meat and cheese; the Piggy is a blend of chopped ham, salami, pepper Jack and provolone. There's a tuna, turkey and Swiss and a premium roast beef made with a sharp white cheddar, horseradish and sweet and spicy pickles.

The old Antone's store and the sandwiches have a distinctive aroma, which hasn't changed a bit in all those years; if you had these when you were young, unwrapping the paper around a sandwich now may just transport you straight back to 1982 when grandma smoked ciggies in the car with you and no one worried about seat belts. Good smells.

For years, Antone's sandwiches have been available premade in HEBs, Randalls and Brookshire Brothers across Houston and Central Texas.

They're now available in 75 select Kroger, Tom Thumb, Albertson's and Market Street Stores in North Texas. In fact, they were spotted at the Tom Thumb near the American Airlines Center a couple of weeks ago. They're also expanding to East Louisiana.

Antone's CEO Craig Lieberman says it's just been a matter of expanding their production facility in order to extend to the North Texas market. "[It] gives us the ability to deliver a consistent, fresh product daily – one that Texans in other parts of the state have come to enjoy. We are hoping to provide Antone’s to more locations in the Dallas-Fort Worth metroplex by the end of 2022 as we celebrate our 60th Anniversary."

In the meantime, remember Antoine's has been in Dallas for decades, as has Jimmy's.
KEEP THE DALLAS OBSERVER FREE... Since we started the Dallas Observer, it has been defined as the free, independent voice of Dallas, and we'd like to keep it that way. With local media under siege, it's more important than ever for us to rally support behind funding our local journalism. You can help by participating in our "I Support" program, allowing us to keep offering readers access to our incisive coverage of local news, food and culture with no paywalls.
Make a one-time donation today for as little as $1.