Dallas’ Best New Restaurants in 2019 Were Casual (and Affordable)

Peak's chili momo, with steamed momo (in the background) Alison McLean
2019 was a banner year for Dallas restaurants. A wave of new openings made splashes in the food scene, and our restaurants and chefs as a whole made a splash nationally, too. Between recognition in the pages of Bon Appétit magazine and rejuvenated neighborhood dining, the picture of this city’s food is looking healthier and more complete than it has in years. Peak's chili momo, with steamed momo (in the background)
Alison McLean
Perhaps most interestingly, when I sat down to consider which new restaurants might be our best debuts of the year, I discovered a common trait: Almost all of our best new restaurants are casual. And that doesn’t just mean they don’t require a tie. Most don’t even require $25.

Eight of the spots on this top 10 list can serve you a great dinner for under $20, most of them for even less. Four are BYOB. And all 10 are welcoming to anybody who walks in the door.

There’s one catch. In the last two or three months, an enormous wave of brand-new openings arrived on the scene. It’s an unusual flurry of activity, and we just weren’t able to get to them all yet. Some are so new that I wouldn’t be able to grade them fairly, anyway.

So, to the good folks at 400 Gradi, Ebesu, Ellie’s, Georgie, Lockwood Distilling Co., Partenope Ristorante, Salaryman, Terry Black’s BBQ, Will Call, anyone whom I just forgot and the yet-to-open Commons Club, Sketches of Spain and Uncle Zhou: You’ll be eligible for next year’s list, as well as the “Best New Restaurant” category in next summer’s Best of Dallas issue.

One more complication hit our list at the last minute: Just weeks ago, Munchiez, the Carrollton Korean-fusion burger joint, closed down. Pour one out for their Korean Army burger and molten-cheese-filled pork katsu sandwich. They were going to be in the top five of this list. A bowl of 10 steamed momo is just $5 at Cafemandu, which is a total bargain.
Alison McLean

2019 was the year of Nepalese food in Dallas, and Cafemandu is a great place to start. The menu mainly focuses on momos, the country’s iconic pleated dumplings, which are available here in a dazzling variety of preparations. Spice lovers should jump into a bowl of chili momos coated in hot sauce; dessert lovers should try what Cafemandu claims are the first sweet momos in the United States. Others might opt for fusion foods, including a burrito with a nine-bean daal mix, or bara, a pancake made with ground lentils and chicken. Cafemandu’s quirky space includes a spectacular mural of myths and legends, and by the way, the E is silent, so the name rhymes with Nepal’s capital, Kathmandu. In South Oak Cliff, just on the other side of Highway 67, the small dining room and equally small kitchen at Kendall Karsen’s exude family-like hospitality. Don’t try to read too much meaning into the restaurant’s name: Kendall and Karsen are owner Kevin Winston’s sons, and “Upscale Soul Food” refers to Winston’s philosophy of clean flavors, excellent execution and a warm welcome. Whether you order Cajun-seasoned fish fillets or baked ribs, be sure to grab a cup of gooey macaroni and cheese. As this article publishes, Kendall Karsen’s is not on Google Maps yet, but find it on Facebook — and look for a formal review in these pages in January. Oak Cliff’s newest seafood joint is a hideaway just blocks from the Bishop Arts District and its tourist crowds. Here the food is a sort of medley of Gulf of Mexico favorites, including ceviche tostadas, seafood tacos and fried oyster po’boys. Almost everything is consistently good, especially tostadas, sandwiches and the enormous baskets of fried okra. And there’s a separate ordering counter in an adjoining room that acts as the house bar, with cheap and cheerful Mexican beers on tap. Ceviche Oyster Bar is casual neighborhood food done well. 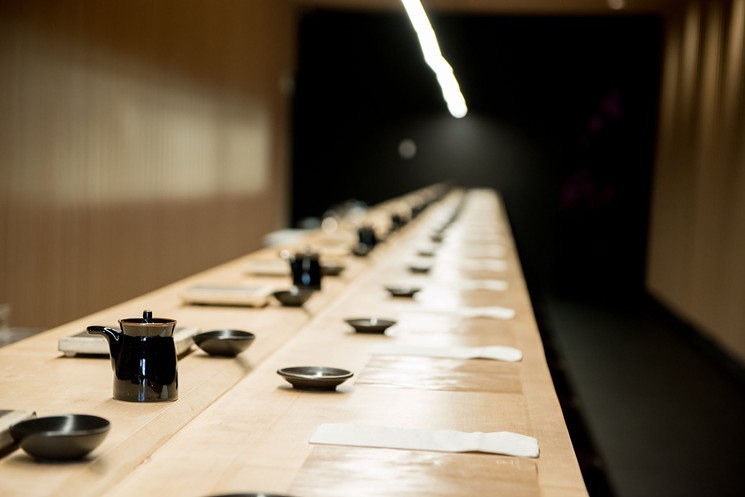 Nori in Deep Ellum offers one seating option: sitting at the bar, watching your handrolls come to life.
Alison McLean

The casual sushi revolution hits Deep Ellum at Nori, where temaki, or handrolls, are meant to be eaten mere seconds after the chef hands them to you. Go for a set menu of four or five, then feast your eyes on the short list of cooked foods which come from the small kitchen behind the bar. Nori is a small place and fills up quickly on weekend nights, so stop by during the week, especially at lunch, to avoid the loudness and long waits this dining room suffers from at peak times. And if you visit often enough, you might gain access to special treatment and secret menu items. (We’re not cool enough, so we haven’t.) 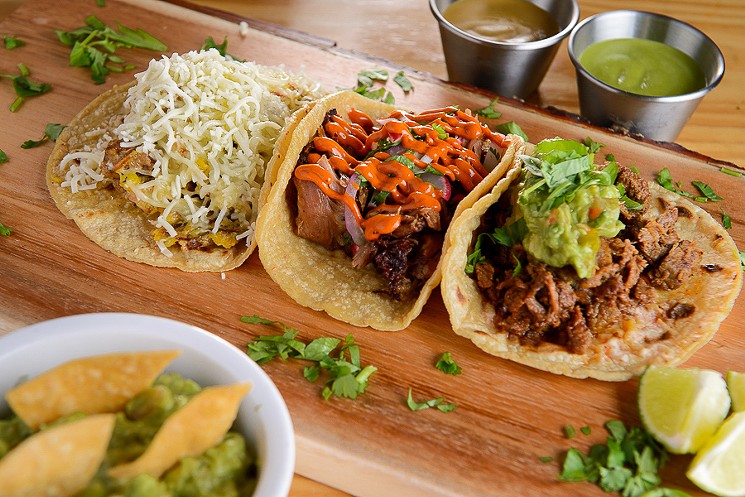 From an original location in a McKinney gas station, Del Sur Tacos made a splash in Oak Cliff when it opened on a slightly empty stretch of East Jefferson Boulevard this summer. Look for mulitas, sort of open-edged quesadillas filled with meat and beans, or opt for some of the lineup of specialty tacos. It’s hard to go wrong, and the dining room’s murals and incredibly friendly staff will keep diners happy while they wait for tacos here. New menu items are still being added. Chinese food lovers in the Dallas area can’t stop talking about Hunan Bistro, and for good reason. Plano’s new purveyor of the Hunan province’s rustic, big-flavored, frequently spicy cuisine is serving excellent dishes like fried fish buried under a pile of hot peppers, big sharing-sized “dry pots” and excellent eggplant. Just avoid some of the region’s worst scallion pancakes and you’re in for a treat. The menu, which is very long and full of photographs and descriptions, is an attraction in itself.

Speaking of new menu items still being added, Ka-Tip Thai is barely out of its soft opening stage. The menu’s still tiny — a party of four can order nearly everything, although they’ll leave outrageously full — and given the size of the dining room, it may stay that way. But each time we go back, something new has appeared. YuYee Kaiho, a Bangkok native, is cooking Thai dishes that bring full-force charges of spice, sourness and herbaceous flavor. Start with the gyao grob (fried wontons with hard-boiled quail eggs hidden in their centers), then move on to a hot-and-sour bowl of tom yum moo sub, the noodle soup full of fish and shrimp balls. Every city needs a Nepalese sports bar. That’s the only conclusion we can draw from our experiences at Peak, which serves homemade momo dumplings, lentil stews, pitchers of American domestic beer and, of course, mango lassi vodka shots. Irving doesn’t really have bars due to the city’s liquor regulations, but Peak is filling the gap admirably. Look for a traditional vegetarian Thakali thali made with Nepalese native spices, or come at happy hour to sample badel sadeko, a dish of pork belly sliced so thinly, and seared so hard, it’s like potato chips made of meat and coated in chili sauce. 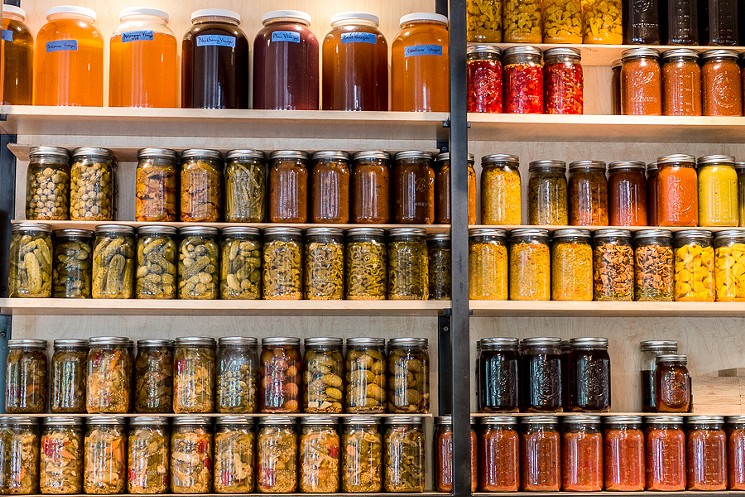 This summer, I named Homewood “Best New Restaurant.” Now it’s No. 2. Why? Because I’m an arbitrary jerk. Also, there are two restaurants I love equally dearly, and now they can both correctly state that we named them the best new restaurant of the year. So this is an underhanded, dastardly way of creating a tie.

Anyway: Homewood showcases Matt McCallister’s mature realization that he could house his creative ambition in a more user-friendly format than his first restaurant, the opaquely-named but uncommonly inspired FT33. The menu still changes every few weeks, except for the dinner rolls which, after a dunk in chicken drippings and Parmesan foam, came out as new bits of Dallas legend. The pastas are extraordinary, as are pastry chef Maggie Huff’s desserts, especially those which showcase fresh fruits. And the design of the restaurant is full of thoughtful touches, like the way that a sunken bar allows bartenders and patrons to see eye-to-eye.

Dirk Nowitzki celebrated his birthday at Homewood. What else do you need to know? How could this list not be topped by Khao Noodle Shop? After all, Bon Appétit thinks it was the second-best new restaurant in the United States. Chef Donny Sirisavath, a restaurant rookie who started the business as a pop-up series, brought a taste of Laos back to East Dallas, a neighborhood where many Laotian refugees settled upon first arriving in the United States. Khao’s success took its leaders by surprise — they used to make all their own rice noodles from scratch, after all — but the restaurant has stayed grounded and consistent with its short menu of noodle bowls and shareable snacks.

Most importantly, though, Sirisavath has eased naturally into a role as a local food leader. Along with Reyna Duong of Sandwich Hag, he encourages a whole generation of new food entrepreneurs with backgrounds from all across the Asian continent.

Stop by the occasional night markets at the two restaurants, or hosted elsewhere, to sample a whole bunch of future Khao Noodle Shops: Not Your Lola’s, Ulam Modern Filipino Kitchen, Momo Shack Himalayan Dumplings, Noodboyz & Thicc Sticcz and maybe even appearances by the just-opened Ka-Tip Thai Street Food. Looking for the future of Dallas food? This is where to find it.
KEEP THE DALLAS OBSERVER FREE... Since we started the Dallas Observer, it has been defined as the free, independent voice of Dallas, and we'd like to keep it that way. With local media under siege, it's more important than ever for us to rally support behind funding our local journalism. You can help by participating in our "I Support" program, allowing us to keep offering readers access to our incisive coverage of local news, food and culture with no paywalls.
Make a one-time donation today for as little as $1.