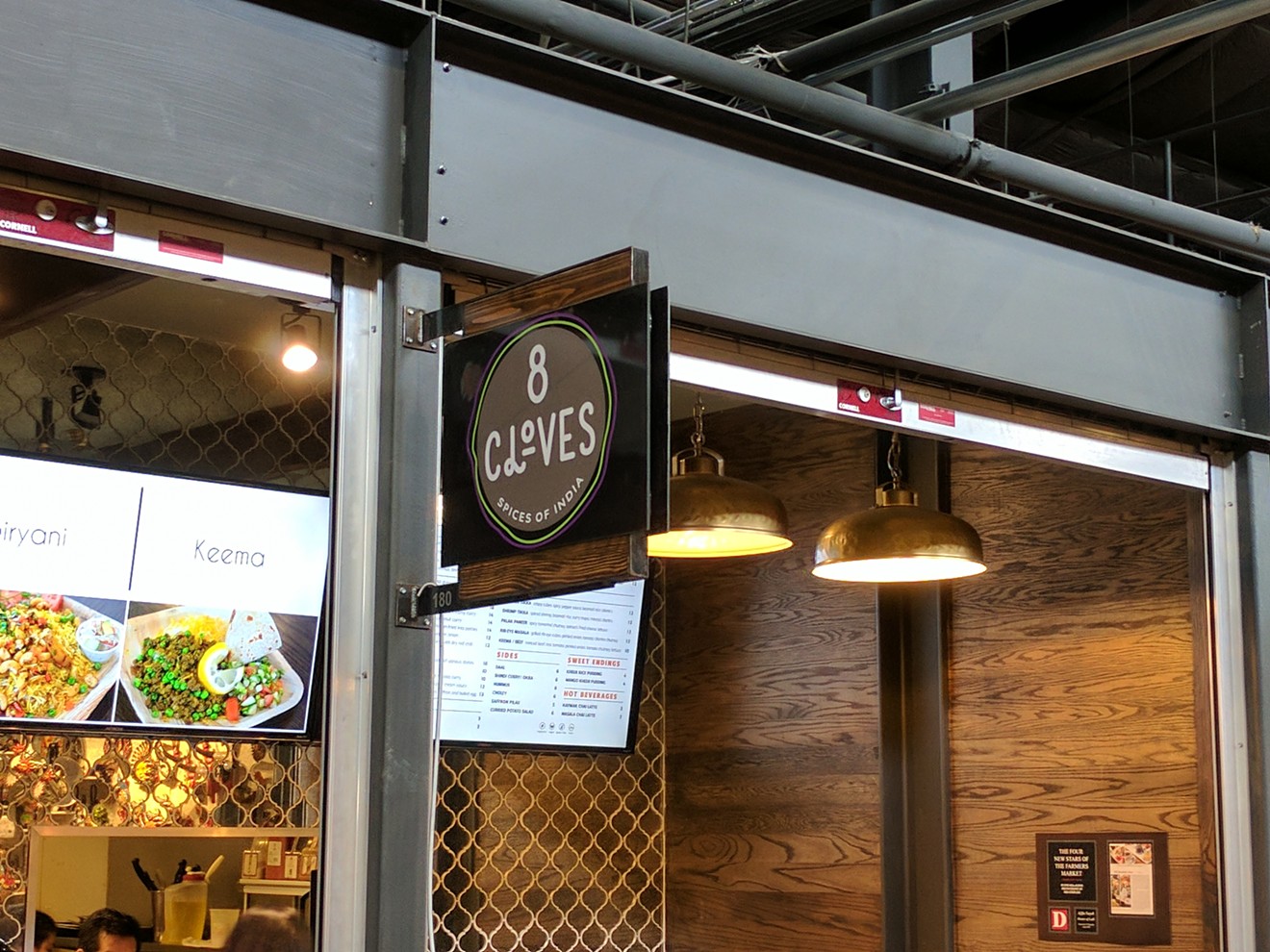 8 Cloves, one of the newest additions to the Dallas Farmers Market, comes from Afifa Nayeb, one of the two owners of DFM favorite Laili. Brian Reinhart
The culinary offerings at the Dallas Farmers Market keep getting more diverse. Afifa Nayeb, the Kabul native who first opened the outstanding “Silk Road fare” shop Laili in the Farmers Market food hall in early 2016 with Turkish pastry chef Nevin Kaya, has now moved on to one of her home country’s more celebrated culinary neighbors: India.

8 Cloves, Nayeb’s tiny new kitchen, is dedicated to northern Indian food with a strong leaning toward vegetarian offerings. The philosophy at 8 Cloves is as healthy and sustainable as it is at Laili, which makes Afghan and Turkish comfort food in a “green” kitchen that disallows frying and employs energy-saving appliances.

At first taste, the flavors at 8 Cloves are more muted than at the original shop on the other side of the food hall.

8 Cloves serves aloo gobi, eggplant bharta, pakora sliders and roti.
Brian Reinhart
Part of that is on purpose. This isn’t the boldly spicy food of South India, and 8 Cloves doesn’t offer many of the curries that are standards at other Indian or Pakistani restaurants in the United States. There is a substantial list of tacos made with the Indian flatbread roti, however, plus biryani and meaty or vegetarian versions of a thali, the platter of four to five tiny dishes that can make up a very filling, reasonably healthy meal.

On the appetizer list, consider going for eggplant bharta ($8), tender cubes of roasted eggplant with a light yogurt sauce and a handful of bell pepper slices for good measure. (Bharta indicates mashing in Indian cuisine, so the use of diced veggies is unconventional.) Like most of 8 Cloves’ food, it’s presented as elegantly as anything you’ve ever seen on a disposable plate, and it’s only gently spicy. The paratha bread, which would usually be lightly fried, was rather doughy and bland, a reminder that healthier isn't always better. Of the restaurant's breads, we preferred the roti.

The eggplant bharta is tender cubes of roasted eggplant with a light yogurt sauce and a handful of bell pepper slices.
Brian Reinhart
The trio of pakora sliders ($8), garnished with little plastic swords, offers spicy patties of battered veggies with some lettuce strips and a sweet-hot sauce. It might be better still if the buns were gently toasted to add variety of texture. From the mains, we sampled aloo gobi ($10), the turmeric-heavy vegetarian dish of cauliflower, potatoes and spices. The aloo gobi comes with excellent long-grained saffron rice and a nice cucumber-yogurt dip, and it is again fairly mild, mostly large cuts of potato with only a few pieces of cauliflower.

There are intriguing drink options at 8 Cloves — think mango lemonade and “masala chai latte” — and it aims to settle into a groove as a purveyor of light, veggie-forward meals. Even the appetizers are pretty filling. As long as you’re not expecting fiery-hot curries — in fact, especially if Indian spice is often overwhelming rather than comforting to you — 8 Cloves is bringing the Farmers Market a lighter side for lunch.