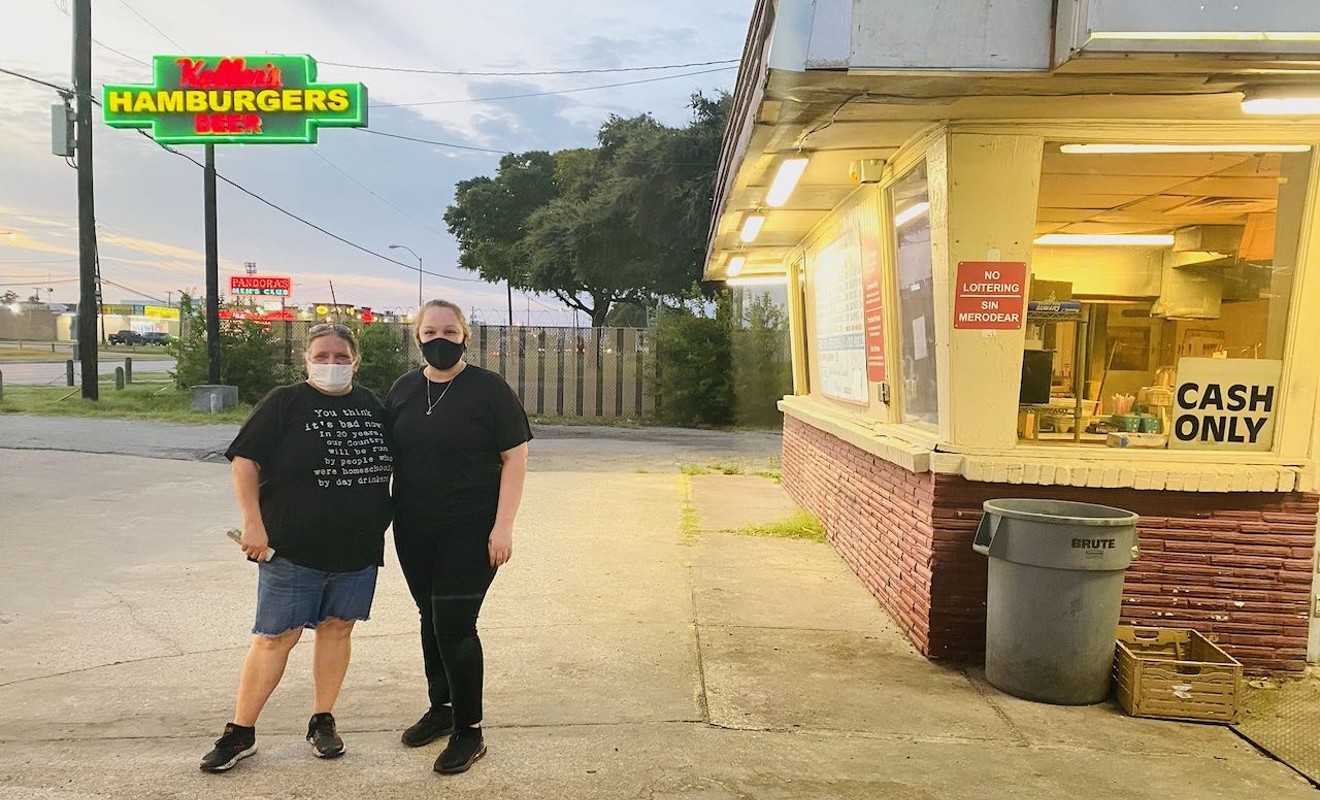 Carhops Christie Easley and Christa Garcia outside Keller's Lauren Drewes Daniels
The sun had just dipped below the horizon. A car did a doughnut in a store parking lot, screaming and sending up clouds of white smoke into the thick air. Other cars headed north on Harry Hines Boulevard, inspired by the display, and suddenly gunned it to the next stoplight. Even an old Ford Ranger found a gear it probably hasn’t used for quite some time. Two cops talking to a pedestrian on the other side of the road didn’t even flinch.

The lights at Keller’s Drive-In were buzzing overhead. About four cars were scattered around the parking lot, windows up, engines running, A/C units cranked to arctic blast mode.

There are a few segments of the restaurant business that have done well during the pandemic, and drive-ins are one of those — in some cases, anyway. A study by Top Agency suggests that Sonic is now the top fast food restaurant in many markets, including Texas.

Luckily, we have a few drive-in gems across the area where diners can grab a burger and watch the world unwind from their car. Sometimes a simple change of scenery can change your whole outlook. 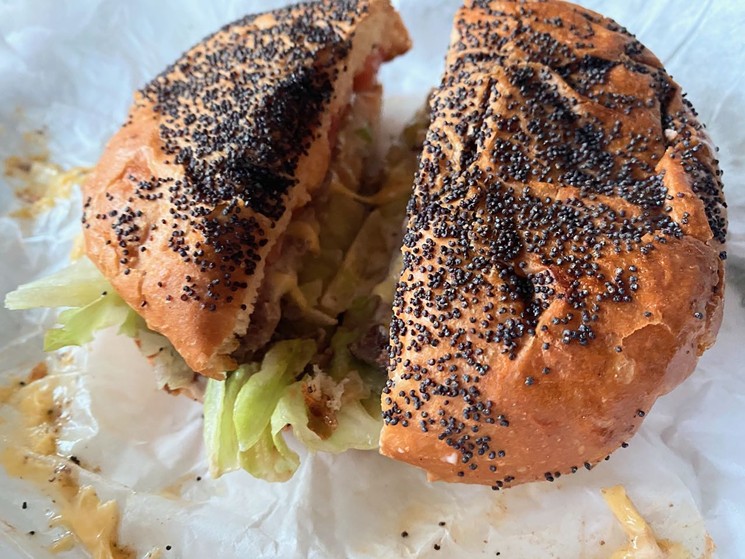 The No. 5 honestly isn't very photogenic, but that's what makes it so delicious.
Lauren Drewes Daniels
Keller’s Drive-In, a Dallas institution at 10554 Harry Hines Blvd. and 6537 E. Northwest Highway, first opened in 1950. Not much has changed over the decades from the menu, building and signage. Even the prices seem decades old, which has helped them keep a steady stream of regulars.

Here, truck beds provide a place for kids to eat and horse around, with parents nabbing a few minutes of space and time together (at a distance these days).

Just a few minutes after pulling in, Christie Easley walked out to our car with a handful of dollar bills, a reminder that this spot is cash-only. She’s worked at Keller’s on Harry Hines Boulevard for 25 years and says they’ve been busier than normal the past few months: though it's hard to discern if it's due to social distancing measures or their affordable fare and the need for things that are familiar.

Easley says their most popular burger is the No. 5, which comes with double meat and cheese, lettuce, tomato and Thousand Island dressing. With fries and a drink, it costs $6.50, and it's stupid delicious. 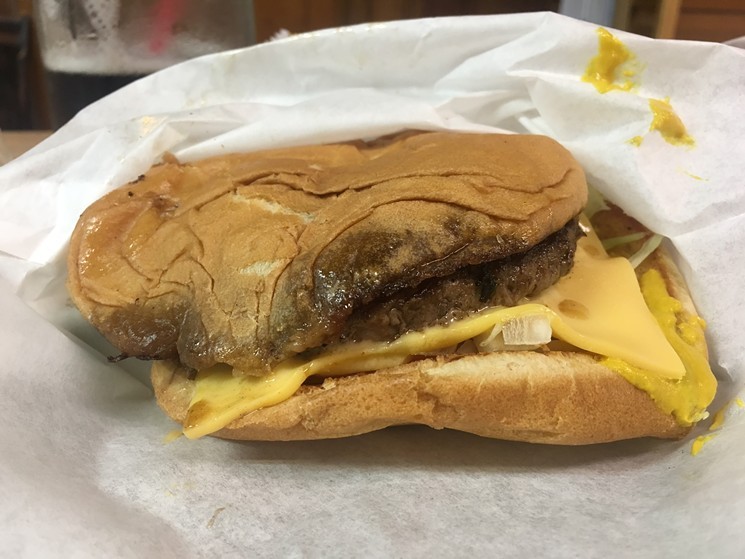 Dairy-Ette burgers are nowhere near photogenic, but that's not the point.
Nick Rallo
A call to Dairy-Ette, another 50-plus year Dallas institution, reveals that the surge in drive-in dining might not have found its way to this spot at 9785 Ferguson Road. Their Facebook Group page has a note from owner Robert “Bob” Prikryl explaining they’ve “lost some of their employees in the kitchen and are having problems hiring qualified people during these times.”

If you’re planning a trip, they highly encourage you to call first. If they answer, they’re open. If they don’t, well, you get it. 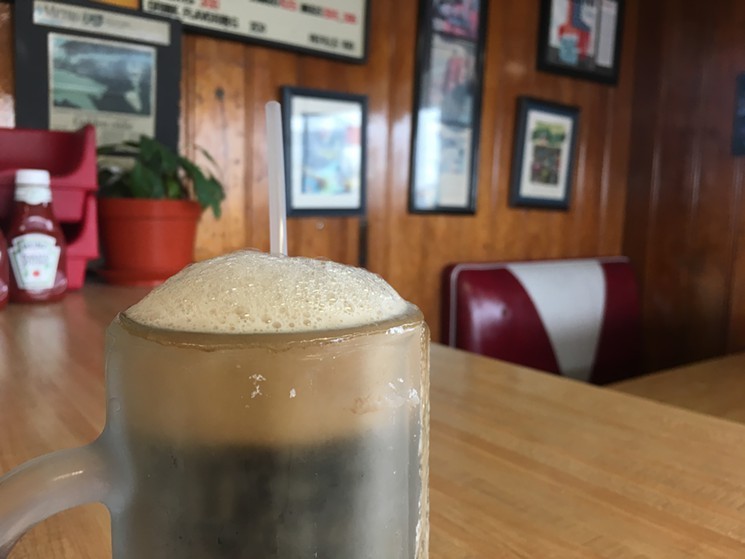 Order your date a house-made root beer at Dairy-Ette and enjoy an old-school night out.
Nick Rallo
It's a tragedy they’re having a hard time. A few years ago, Observer writer Nick Rallo swooned, “I nearly lick the glass of root beer clean. It’s a quintessential meal in a city with a disconcerting restaurant bubble, and Prikryl’s running the joint with an ease that’s something to behold.”

It’s nothing extraordinary, just meat on a flat grill with all the basics; but as Rallo wrote, the Far East Dallas treasure is one-of-a-kind, a fixture of a bygone time with an old-school diner vibe.

Theo’s Drive-In at 2626 East Main St. in Grand Prairie rounds out the trio of drive-ins that have been open since the 1950s in the area. During normal times, customers can eat inside or stay in their cars.

A call to the restaurant was a stark reminder that these are bad times. Like Dairy-Ette, Theo’s has been painfully slow recently, too. But, it’s not for the nostalgic burgers and service. Here they even have the trays that hang off car door windows. The double-bacon cheeseburger is the most expensive burger on the menu at $7.20. They also have chili dogs, sandwiches and corn dogs, and their onion rings are popular. And you can’t leave without a large shake, right?

Pro tip: Ask for the garlic salt on the fries. Also, take note there’s a Theo’s Bar and Grill in Grand Prairie and they are NOT a drive-in.

These places have been serving affordable comfort food for decades. A trip there today may be the break you need to keep satisfied and may provide the support they need to survive.
KEEP THE DALLAS OBSERVER FREE... Since we started the Dallas Observer, it has been defined as the free, independent voice of Dallas, and we'd like to keep it that way. With local media under siege, it's more important than ever for us to rally support behind funding our local journalism. You can help by participating in our "I Support" program, allowing us to keep offering readers access to our incisive coverage of local news, food and culture with no paywalls.
Make a one-time donation today for as little as $1.