Go Go to Ichigoh: Ramen and Age Mochi Worth the Parking

Special spicy miso ramen is served with two thick slices of pork belly. Hank Vaughn
Ichigoh Ramen Lounge’s origin story has already been covered by Dallas Observer, but to quickly recap: New Yorkers George Itoh (by way of Wisconsin) and Andy Tam moved to Dallas after falling in love with the Deep Ellum neighborhood, eventually opening their restaurant in late 2018 in the spot previously occupied by Tanoshii. Sadly, chef Itoh passed away about a year ago, but his legacy is living on.

We’d always wanted to try it out, but searching for parking, especially in Deep Ellum, is soul-sucking. Still, good food in general and ramen, in particular, is worth it, so after seeing this place on yet another YouTube review channel, we gathered up as many quarters as we could find for meters, gassed up the car, and headed south in search of noodles.

Are these deep-fried mochi rice cakes (age mochi) worth downloading a parking app in Deep Ellum? Yes.
Hank Vaughn
Things were looking up after finding a parking meter with two hours remaining on it only a block away. This was a good omen, and we excitedly entered and were met with the wonderful aroma of slow-cooked savory broth while we waited for our QR code menus to load.

First, we settled on age mochi for an appetizer: a deep-fried mochi rice cake with dhoyutare sauce and ao nori. These light and extremely flavorful balls of goodness were brought about six to an order, but we could have eaten … 12? Maybe even a baker’s dozen, and by baker’s dozen we mean 18. They were like a much more complex and yummier tater tot. Perhaps we could have eaten two dozen. 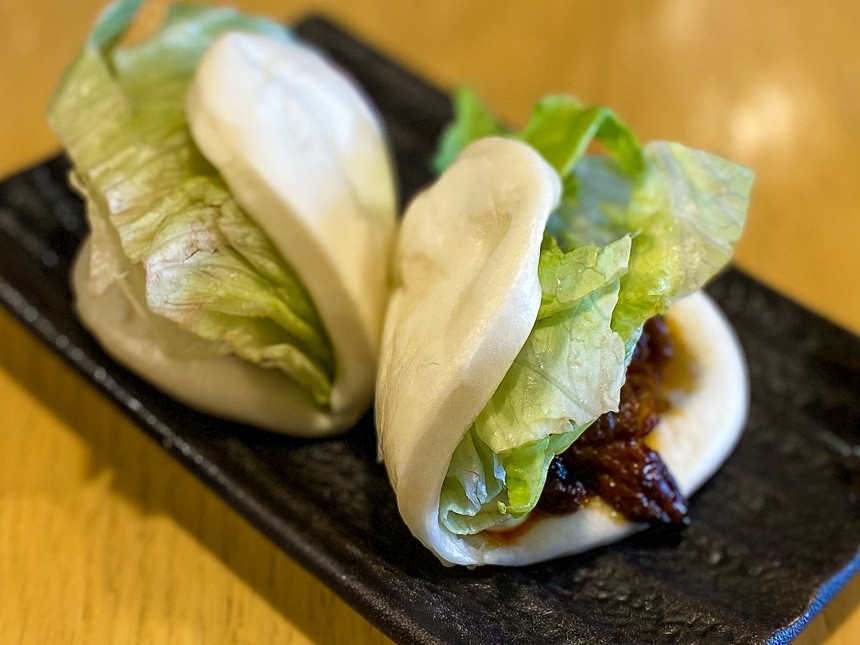 Pork buns
Hank Vaughn
Next came the pork buns, which can be vegetarian (eggplant and eringi oyster mushroom batter), chicken (fried thigh) or pork. We settled on pork, two to an order, with nicely steamed buns, lettuce, hirata spicy barbecue sauce and mayo. Not bad. Not bad at all, and one each was just enough.

For ramen, we opted for a bowl each of spicy soboro shoyu ramen and special spicy miso ramen. (All of the ramens have a chicken-based broth as opposed to the perhaps more traditional pork-based variety). The soboro shoyu ramen in particular was what precipitated this visit after seeing this dish on YouTube. It was chicken broth, sesame oil, scallion and spicy ground pork. Since the pork was ground, they helpfully provided us with a giant spoon so we didn’t have to embarrass ourselves trying to catch all the stray bits of goodies with chopsticks.

This all hit the spot on a cool, dark day. It was so good that we finished it off quickly. Perhaps too quickly: We still had over an hour left on the parking meter. That just meant there was plenty of time to wait for our to-go order of age mochi to be prepared.

Ichigoh Ramen Lounge, 2724 Commerce St. (Deep Ellum), 12-9 p.m. Wednesday - Thursday and Sunday; 12-10 p.m. Friday and Saturday; closed Monday and Tuesday.
KEEP THE DALLAS OBSERVER FREE... Since we started the Dallas Observer, it has been defined as the free, independent voice of Dallas, and we'd like to keep it that way. With local media under siege, it's more important than ever for us to rally support behind funding our local journalism. You can help by participating in our "I Support" program, allowing us to keep offering readers access to our incisive coverage of local news, food and culture with no paywalls.
Make a one-time donation today for as little as $1.