This Deep Ellum spot was a long time coming. Alex Gonzalez
Two years ago, Ichigoh Ramen Lounge quietly took over the Deep Ellum space previously occupied by Tanoshii. It's owned by George Itoh and Andy Tam, who came from New York City to Dallas after falling in love with the Deep Ellum neighborhood.

Itoh has more than 26 non-consecutive years of hospitality experience. Originally from rural Wisconsin, he got his first job in a Japanese hibachi restaurant at 15 years old. He started as a dishwasher, but that only lasted about seven hours.

“They threw me into the kitchen,” Itoh says, “and they started teaching me how to use a knife and how to prep. Then, in about three or four months' time, I was actually cooking in front of the customers.” George Itoh
Alex Gonzalez
Itoh studied at the University of Wisconsin Milwaukee, then moved to New York City after graduating. While in New York, he immersed himself in the arts, working in video production and shooting commercials and campaigns for insurance companies and financial institutions.

Itoh says the culinary scene called him back shortly after 9/11, when he befriended a restaurateur from Edgewater, New Jersey. He worked as a restaurant manager until 2009. During that time, he was headhunted for Ippudo, a popular Japan-based ramen chain that was set to open in New York. But at the time, the owner of the Edgewater restaurant had terminal cancer, and Itoh had promised him he would run the restaurant for at least a year after he died.

Itoh then decided to work for Ippudo, where he immediately was given a management role. 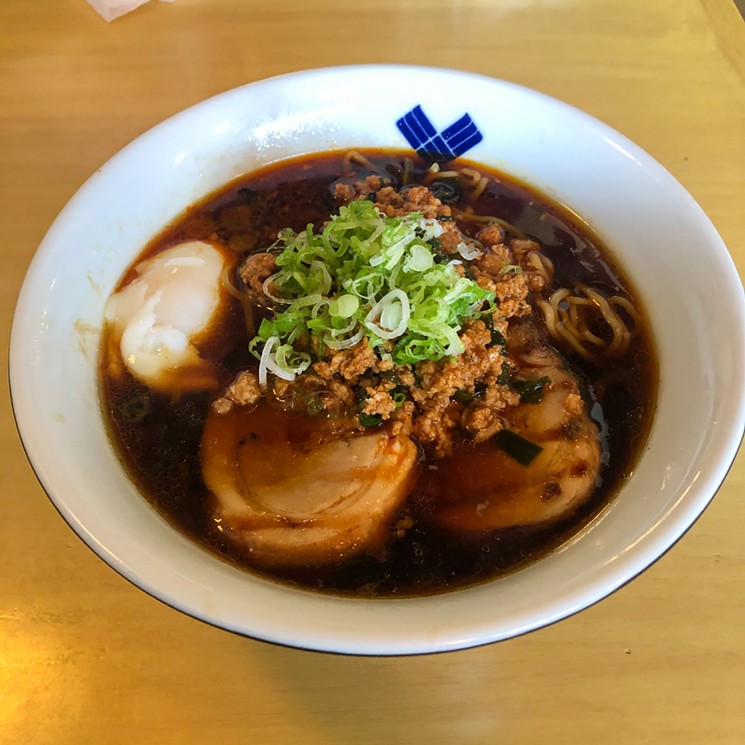 Spicy soboro shoyu ramen.
Alex Gonzalez
During his time at Ippudo, Itoh helped develop recipes that are now available for purchase at Ichigoh. One of his most popular items is the Ichigoh veggie buns, a plate of two buns stuffed with fried eggplant in an eringi mushroom tempura batter, Hirata’s barbecue sauce and Japanese mayo ($8). He originally came up with this recipe after actress Anne Hathaway would visit Ippudo in New York and ask for vegetarian-friendly items.

Itoh has helped open Ippudo stores all around the world, including in Sydney and London. After the company went public, he decided it was time to open a restaurant of his own.

He came to Dallas at the end of 2016. He thought it would be a great place to set up shop after hearing Toyota was moving its headquarters to Plano.

“I didn’t really expect to fall in love with Dallas,” Itoh says, “but I realized this was going to be the best place to open what I wanted my restaurant to be.”

While suburbs such as Plano and Frisco have opened several new restaurants in recent years, Itoh wanted Ichigoh to be in a place of cultural significance.

“I wanted to open up in a place that had historical value,” he says. “I didn't want to open up in a strip mall in the suburbs. I wanted something that still had ‘old building character,’ where I could pretty much squeeze into, and not have to do a whole lot of renovation.” Ichigoh veggie buns.
Alex Gonzalez
Ichigoh officially opened in November 2018, however, Itoh was rather clandestine about it. He had “little-to-no” signage out front, other than a plaque on the door.

Since its opening, Ichigoh has been a popular ramen stop in Deep Ellum. The atmosphere is simple: There's a bar and several tables in a cozy, house-like setting. No excruciatingly loud music and no long lines to get in.

While many restaurants have been able to pivot to curbside pickup and delivery formats, Itoh says COVID-19 has affected business “dramatically.”

“Ramen is one of the least transportable foods,” Itoh says. “It isn’t meant to be a takeout food to begin with. When COVID first happened, it wiped out our business almost 100%, so we had to rethink everything.”

Ichigoh has since cut all of its staff and is now operating as a mom-and-pop shop. Itoh, however, does plan to rehire his staff once things begin to (hopefully) bounce back. He says the work ethic and the friendliness among the people he has met in Dallas are unmatched.

“Everyone here is just genuinely hospitable,” Itoh says. “I can’t train people to be genuine. That’s something that comes naturally.”

Ichigoh Ramen Lounge, 2724 Commerce St. (Deep Ellum). Open noon to 9 p.m. Tuesday through Thursday; noon to 10 p.m. Friday and Saturday; noon to 9 p.m. Sunday.
KEEP THE DALLAS OBSERVER FREE... Since we started the Dallas Observer, it has been defined as the free, independent voice of Dallas, and we'd like to keep it that way. With local media under siege, it's more important than ever for us to rally support behind funding our local journalism. You can help by participating in our "I Support" program, allowing us to keep offering readers access to our incisive coverage of local news, food and culture with no paywalls.
Make a one-time donation today for as little as $1.