Gimbap, a seaweed-wrapped roll of bulgogi, imitation crab and veggies, from Damasita. Alison McLean
Damasita’s dining room has changed dramatically in the last six months. The restaurant opened in early 2018 as a Japanese izakaya, serving tempura platters and agedashi tofu. But without changing its name, new owners arrived in December 2019, remodeled the whole space and converted the menu to a list of Korean comfort foods.

What was once a dark, buzzy bar is now a homier space filled with earth-tone tiles and potted plants. It’s also an emptier space: The coronavirus outbreak has hit Damasita’s business hard. Each time I picked up to-go orders in the past few weeks, the dining room was empty, though masked customers are allowed to eat inside.

A representative for Damasita says 80% of the restaurant’s business is takeout now.

The specialty here is traditional Korean comfort cooking. In particular, this kitchen is a source of darn-near perfect gimbap, the extra-large seaweed-wrapped rolls which are close relatives of sushi. Assembling all of that into a 2-inch-thick roll that sticks together is a feat of engineering. At some restaurants in town, gimbap is prepackaged and sold in shrink-wrapped cartons; at Damasita, it tastes freshly made. Takeout rolls are wrapped in foil. Each of the $4 rolls contains 10 pieces, the filling admirably uniform from end to end.

No matter what protein goes in Damasita’s gimbap, it’s a perfect appetizer, snack or picnic accompaniment. And, honestly, it would be a satisfying deal at twice the price.

The rest of the menu divides neatly into four quadrants. One is appetizers, my favorite of which is a $3 chive pancake which is almost all chive and carrot, with just barely enough pancake batter to hold the veggies together. The side cup of dressing – a simple mixture of soy sauce, a bit of sugar and a healthy scoop of chile pepper flakes – is mandatory.

The other three menu sections are noodle soups, rice bowls and dumplings. The chubby homemade kimchi dumplings are actually mostly filled with pork and glass noodles, with a bit of the kimchi’s kick ($5 for five). I love them – they are so generously filled that they fall apart at first bite – but diners seeking out a true kimchi-filled dumpling should head to Arirang Korean Kitchen in Carrollton.

Bibimkalguksu, the dish of chilled noodles in a spicy gochujang-based sauce mixed with cucumbers, lettuce and other vegetables, is a perfect summertime dish for those who want spice without literal heat ($9). Otherwise, some of Damasita’s best mains are deopbap, generous bowls of soft, fluffy, delicately flavored rice topped with fried eggs, vegetables and meats like seared pork belly ($9). The fatty richness of the belly parries with sharp kimchi. Vegetarians or the spice-averse might look to sautéed mushrooms instead for their rice bowls; my favorite option is thinly sliced, marinated pork (jeyukdeopbap; $9). 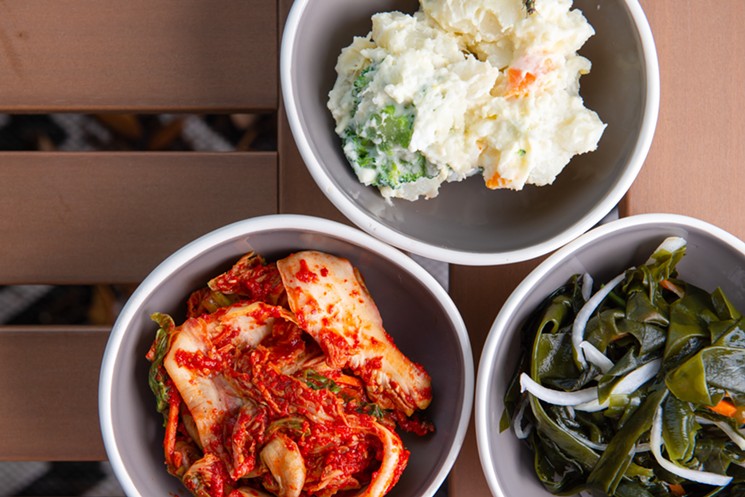 Banchan plates
Alison McLean
Damasita is sending home free banchan in its takeout orders, as crazy as that may be in this economy. (They should probably raise their prices. Business is hard in a pandemic, and this food is worth more.) The portions are bounteous already, but add on three small cups of free food, and a savvy $20 order can feed a family.

They’re not exciting banchan, but it’s doubly rude to complain about extra food right now. There’s a creamy potato salad with broccoli florets and fat chunks of carrot, which clears the palate after a portion of spicy food. There are dressed leafy greens. And there’s Damasita’s kimchi, which is not aged long but packs punch.

The last few months have been hard on Dallas’ original Korea Town, which stretches along a densely packed single mile of Royal Lane in the city’s northwest corner. Korea Town has suffered before; for several decades, property values slowly declined and crime steadily increased, as many of the area’s Korean Americans moved north to Carrollton.

A turnaround was taking place when coronavirus arrived. New restaurants and coffee shops were opening, and several international banks were building glossy new branches. This single mile of Royal Lane was, four months ago, one of the most exciting places to eat in North Texas.

On my latest visit to Damasita, I walked around the Royal Korea Town Plaza shopping center where it sits. The sight was heartbreaking. Almost every business’ lights were off. The clandestine pool hall I once glimpsed through an open door is now permanently shuttered — one of its windows kicked in during a series of break-ins in the area last month. Kimchi dumplings from Damasita.
Alison McLean
The Korean dive bar where I once watched customers lighting up cigarettes is closed, with no signage of any kind in the windows. Koryo Kalbi Korean BBQ, the decades-old mainstay that serves an enormous menu of soups, noodles, barbecue and lunch boxes, has a paper sign claiming it is closed “until March 20.” On the internet, Korean food lovers are anxiously asking each other if Koryo Kalbi is gone forever.

As I walked back toward my destination, a young Asian American couple peered into the side windows of OneNTwo Chicken.

“It says it’s only closed Wednesdays,” one of them said, staring into the darkness. “This isn’t Wednesday.”

Damasita is a survivor. I don’t know how long any restaurant can last in this climate, but I hope desperately that Damasita will. Its pure comfort foods are something we all need right now. The spicy noodles, the chubby dumplings and the impossibly neat gimbap are each, in their ways, reassuring, a glimpse at the peaceful normalcy our world has left behind.

Damasita, 2564 Royal Lane (Far North Dallas). Open for dine-in and takeout 11 a.m. to 7 p.m. Monday through Saturday. Call in orders by 6:30 p.m. 972-241-3760.
KEEP THE DALLAS OBSERVER FREE... Since we started the Dallas Observer, it has been defined as the free, independent voice of Dallas, and we'd like to keep it that way. With local media under siege, it's more important than ever for us to rally support behind funding our local journalism. You can help by participating in our "I Support" program, allowing us to keep offering readers access to our incisive coverage of local news, food and culture with no paywalls.
Make a one-time donation today for as little as $1.