The pork belly bao with Japanese mayo at Sumo Shack Kathy Tran
Kids these days have it so easy.

No, I’m not talking about millennial entitlement, smartphones, trigger warnings, participation trophies or our planet’s inevitable spiral into a nightmare of rising oceans and blistering heat waves.

I’m talking about the fact that college kids can get such sophisticated drunk food. Take the latest addition to SMU Boulevard, Sumo Shack.

College-aged me would have loved Sumo Shack. It’s hip, tasty and cheap, with a cleverly designed menu of good fast food available late into a Saturday night. This may not be the finest of dining, but it’s exactly what the SMU neighborhood needed most.

The Tokyo dog at Sumo Shack
Kathy Tran
College-aged me could have eaten two of Sumo Shack’s all-in hot dogs with a side of fries. Now, tragically, my metabolism can only handle one. These all-beef franks are super-flavorful, some of the best hot dogs in Dallas, especially following the sad demise of Luscher’s Red Hots in Deep Ellum. The new restaurant’s sausages are served juicy, boldly beefy and searing hot. Sumo Shack lightly toasts its buns and adds toppings that are generous but not so generous that they overwhelm the beauty of that meat.

College-aged me might have opted for the SMU dog ($5.50), essentially a chili-cheese affair, but with old age comes great wisdom and great yearnings for the Tokyo dog ($5.95), which has layered kewpie mayo, caramelized onions, nori and a garnish of sesame seeds and dancing bonito flakes. The dried seaweed strips, in particular, turn out to be just the intensely savory note this snack needs for a trip to the Hot Dog Hall of Fame.

The star of the show at Sumo Shack is bao, the steamed bun that’s probably best-known in Texas as an accompaniment to Peking duck. Bao is on the rise across the state. Fat Bao in Houston has been a creative, festive favorite since 2012. More recently, chef Josh Harmon has been toying with a series of inventions at Kitchen LTO and its reincarnation as Junction Craft Kitchen.

Bring on the bao, I say. Few foodstuffs — tacos, for instance — offer as much room for a chef to play around and get crazy for as low a price. Sumo Shack passes the basic test of consistently producing fresh, well-textured bao that never seems flavorless or like it’s been sitting out. 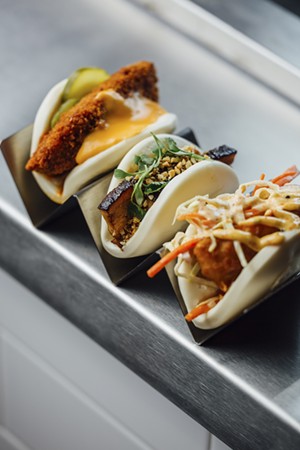 From left: crispy fish bao (fried cod, cole slaw, tartar sauce and spicy mayo), pork belly bao (braised pork belly, kewpie mayo, peanuts, scallion oil) and Angry Bird bao (spicy battered chicken with cheese and pickles)
Kathy Tran
Consider the Angry Bird, a sort of revisionist Chick-fil-A sandwich with good, juicy, spicy-battered chicken under a blanket of molten American cheese and a couple of pickle slices ($3.50). My college friends would have quit complaining about a certain chain being closed Sundays. Or try the Philly cheesesteak bao ($4.95), which nails the flavor of the thinly sliced marinated beef, rather than trying to change things up by, say, substituting bulgogi. (On second thought, a bulgogi bao sounds pretty great.) Purists take note: Sumo Shack uses provolone rather than Cheez Whiz, which is fine by me.

On one visit, a shrimp bao special featured medium-sized shrimp battered and fried popcorn style, then topped with pico de gallo and a big avocado wedge that continually threatened to fall out of my mini sandwich. The shiitake bao ($4.95) is packed with mushrooms and julienned cucumbers in a sauce that tastes like teriyaki teamed up with the sweeter styling of Kansas City barbecue sauce.

The signature dish here is the po bao ($5.95), a soft-shell crab deep-fried until it’s the color of the underside of a cookie. Two employees told me the po bao is their favorite, but on one visit it was clearly overbreaded and overfried; it tasted more like a hush puppy than a crab. A quick double-check on my next visit revealed the situation only slightly improved, but I did discover the sheer joy that comes from dumping Sriracha across the top.

Still, thank goodness for the burger bao, 2017’s most miraculous new fusion food ($3.95). Sumo Shack opts for the classic burger experience, one that wouldn’t be out of place at Keller’s or Off-Site Kitchen, except for the whole Chinese steamed bun thing.

That means American cheese, lettuce and simple pickles. It also means a smallish burger patty, halfway between slider and full-size, which receives a righteous sear yet remains juicy dark pink in the middle. For a patty so thin, such a brilliant preparation is darn near miraculous. Many a burger joint in town would be proud.

College-aged me could have downed three or four burger baos in a sitting.

Sumo ramen with chicken and port base, chasu, marinated egg, wood ear mushroom, black garlic oil, pickled ginger, onion and scallion
Kathy Tran
On the peripheries of the menu are other items of varying interest, like takoyaki, the fritters with octopus pieces at their cores, or Sumo Fries, which are pretty solid chili cheese fries made worthwhile by pickled jalapeño slices and more dried seaweed slices ($4.95). There’s ramen, too — the ultimate college food, but not in instant form.

Sumo ramen clocks in at $9.95, and while it’s not the best ramen in Dallas, it would be a good introduction for students who have only eaten the dried blocks that come with flavor packets. A chicken and pork broth base, not too salty and scattered with black garlic oil, sets up the thin, gently wavy noodles, diced white onions and a small handful of mushrooms. It would be nice if the pork belly slice were less tough, but this is ramen for college kids, not connoisseurs, and it succeeds in that humble mission.

SMU Boulevard has become one of Dallas’ biggest hot spots for affordable eats. Sumo Shack sits across the street from Torchy’s Tacos, but, unlike that spot, it’s not a chain. And it offers Japanese beer on tap for $4. College-aged me would have loved that almost as much as the burger bao and the Tokyo dog.

Affordable imported beers and late-night snacks that are legitimately creative and well-executed? A classic burger in a steamed bun? Oh, to be young again.