The Shacks are a complex of small restaurants, a sprawling patio deck with outdoor seating and a 1-acre dog park for four-legged companions to make new friends. According to Austin Ranch developer Billingsley Co., there are 5,000 residents in Austin Ranch who could be drawn to the new dining options and the community's first off-leash dog park. The dog park portion has been open since midsummer, but the restaurants had their grand opening Saturday, Aug. 26. 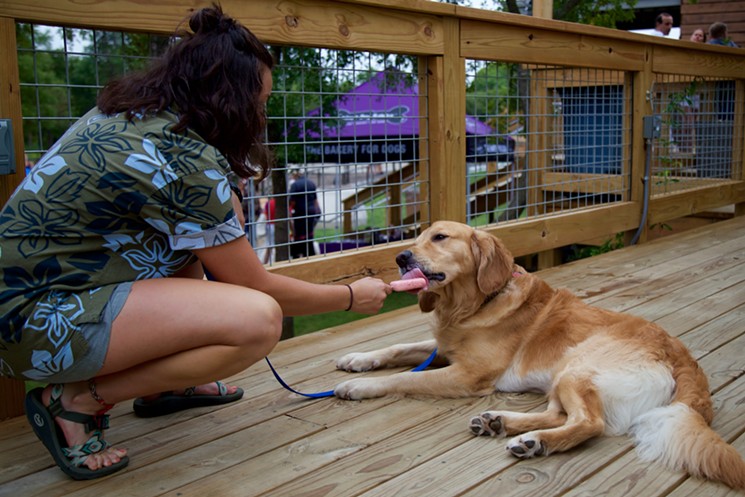 "No, really, I shouldn't. OK, just one more lick."
Chris Wolfgang
The dog park includes areas for smaller and larger dogs, with water fountains in both to keep pets hydrated in the hot summer months. Much like Mutts Cantina, customers and their dogs need to be members of The Shacks Dog Park in order to visit. Memberships are $15 per month or $125 per year, but patrons and their dogs get a day pass by dining at any of the restaurants at The Shacks. Dogs without passes are welcome on the patio, but they aren't allowed inside the restaurants.

Thanks to the multiple establishments at The Shacks, there is fare to fit the desires of almost any diner. The first to open was a second location of Ten Ramen, which has a location in West Dallas that serves up some of the best ramen in the city. Ten's location at The Shacks has been open since July and serves up the same dishes in the same painted ramen bowls, with a more relaxed attitude about breaking the rules of ramen. There's a small bar inside, and patrons can take their bowls outside to eat at one of the many patio tables. 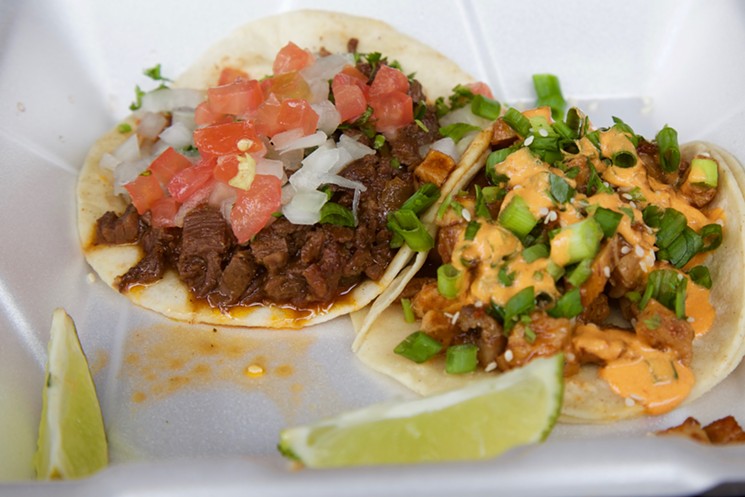 OMG Tacos will have you LOLspeaking in excitement in between flavor-packed bites.
Chris Wolfgang
Another restaurant opening a second location at The Shacks is OMG Tacos. We've praised OMG Tacos as one of the most underrated tacos in the area, so we were pleased to see much of the same menu at The Shacks. Just to make sure their taco game was still on point, we tried an OMG steak and OMG chicken taco ($2.75 each), both of which packed the same spicy flavor punch we loved at the Richardson location.

There's also Dirty Burger Bar, so named because owners Frank Carabetta and Celia Lopez expect their patrons to get messy while they eat their burger creations. The pulled pork burger ($11) is made with a patty topped with bacon, pulled pork, slaw, cheddar cheese and DBB sauce (a ketchup/mayo combo seasoned with horseradish and paprika). The smoky pork and crispy bacon stood out, and eating it is a multiple-napkin affair. All burgers, wraps and sandwiches on the menu come with a choice of seasoned or sweet potato fries. Carabetta and Lopez also operate another Shack called the Tackle Box, which serves seafood po'boys and fish tacos. 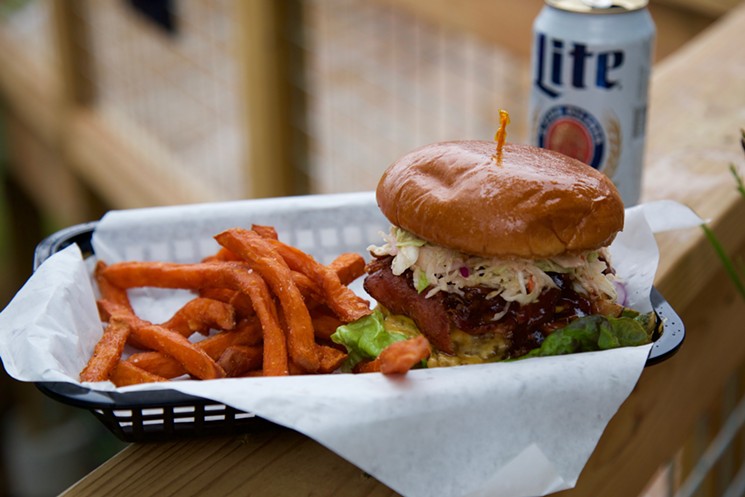 Dirty Burger Bar lives up to its name with a messy yet tasty pulled pork barbecue burger.
Chris Wolfgang
Two restaurants are yet to come at The Shacks, according to developer Billingsley, but the tenants have not yet been named. Also yet to come is the Beachcomber Cafe, which will be adjacent to The Shacks and offer lighter bites and beach volleyball when it opens later this year. The Shacks also promise a series of events such as Sunday morning yoga classes, live music and pet adoption events, which, combined with the expanded dining choices, will surely make The Shacks a favorite for residents and dogs of the area.

The Shacks at Austin Ranch, 5800 Windhaven Parkway, The Colony