Why The Grape Is Giving Up on Sunday Brunch 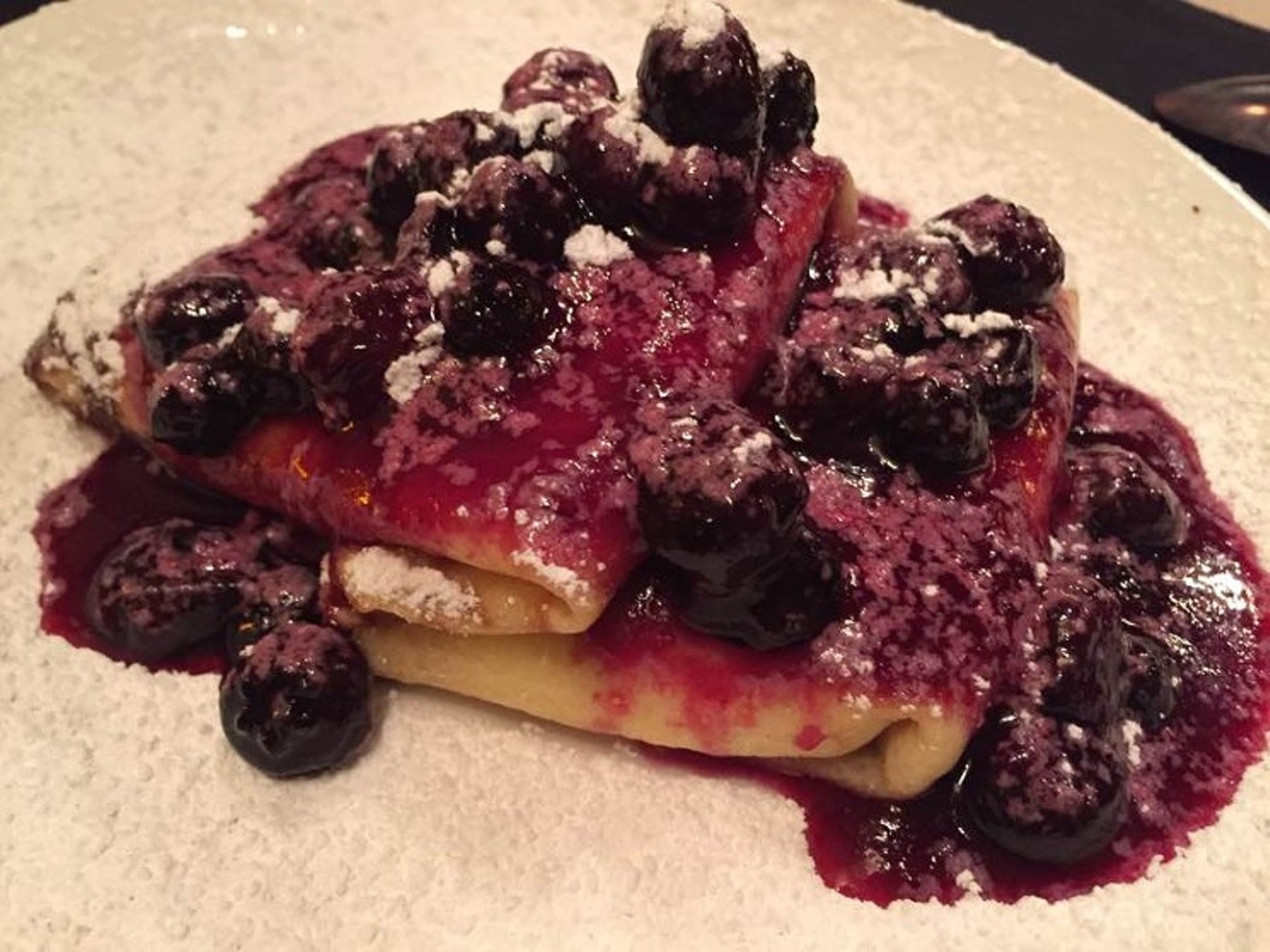 After a decade of serving brunch dishes like these blueberry blintzes, The Grape is giving up on brunch. Kathryn DeBruler
In 2007, Brian Luscher bought The Grape, a long-running Greenville Avenue bistro where Luscher worked as executive chef. One of his first orders of business as owner of a restaurant that has been open since 1972 was launching Sunday brunch. Now, 11 years later, he's doing something equally bold in a city that's known for its fervent adoration of brunch: He's killing it.

This Sunday will be The Grape's final Sunday brunch service.

It would be easy to see this as a sign that The Grape is struggling, maybe even on the brink of throwing in the towel. But The Grape is still going strong, Luscher says.

"It’s low-hanging fruit to say The Grape's gonna close," Luscher says. But in reality, "this component of our service — which is atypical of what The Grape does — is not generating profit." 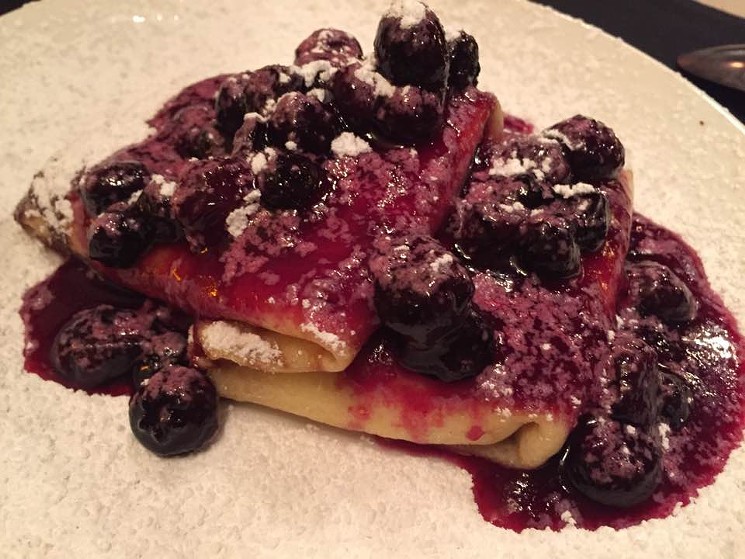 After a decade of serving brunch dishes like these blueberry blintzes, The Grape is giving up on brunch.
Kathryn DeBruler
The Grape's brunch has had a nontraditional run, to say the least, after it became famous statewide for one particular dish: a burger special that, in 2009, was named the best burger in Texas by Texas Monthly. The burger is only sold on Sundays and Mondays, and after Texas Monthly's story, it made The Grape's brunch blow up, big-time.

"The Sunday after the magazine came out, we went from 100 people (at brunch) to about 300, and half of those ordered the burger," Luscher wrote in D Magazine in 2015. "It was a tsunami."

Over time, brunch crowds (and burger orders) leveled out. In the last two years or so, as Dallas' restaurant population and brunch scene have continued to balloon, Luscher found that brunch, often thought of as a cash cow in the industry, just wasn't making the same amount of money as it used to. Increasingly, it didn't seem to mesh with The Grape's identity as an intimate, specialized bistro.

"In the last 6 to 18 months, everything’s changed," Luscher says. "Everything that we’ve all learned over decades, all that shit's changed in the blink of an eye. The average diner has changed."

Diners are more informed and adventurous, Luscher says, thanks to "foodie culture" and Dallas' increasing reputation as a city built around dining out. Competition has never been fiercer.

"What an amazing time to be an aware diner in the city of Dallas and the metroplex," Luscher says. "There are more choices than there have ever been."

Despite the city's ever-changing dining landscape — and the fact that it's been open for nearly 50 years, an eternity in the restaurant industry — The Grape continually makes lists of the city's best restaurants. We recently named it No. 22 on our list of Dallas' Top 100 Restaurants. Last year, we also enthusiastically opined that The Grape's brunch is one of the best in the city.

"What an amazing time to be an aware diner in the city of Dallas and the Metroplex. There are more choices than there have ever been." -Brian Luscher

But brunch is also a bit of a bastard for many in the restaurant industry. Brunch crowds are different from standard clientele — they're more demanding, sometimes less open-minded. They spend less than at other meals. And offering weekend brunch means calling in staff who, often fried from hectic Friday and Saturday night dinner service, are exhausted, and aren't exactly morning people to begin with. Sunday brunch means pulling staff away from their homes and families during what used to be the one time of the week when restaurant workers could relax and spend real time with loved ones. And it takes a lot of manpower; Luscher says he's got two or three employees who spend almost all of their time preparing just for Sunday brunch.

"It’s a soul stealer. It really is," Luscher says. And profit margins on brunch were razor-thin, he says.

The Grape exists in a part of Dallas that loves to brunch, but Luscher is ready to give it up and refocus his energy on rebooting the long-running bistro and focusing on the aspects that do make money.

"I’m gonna reassess the entire menu," he says. "I'm taking this as a hard refresh. What do I do with this 50-year-old restaurant in a 100-year-old building?"

For Luscher, there is just one question left to tackle: "How do we maintain relevancy in this newly vibrant, burgeoning restaurant scene?"

Brunch used to feel like the way to do that, but after losing his beloved restaurant, Luscher's Red Hots, which closed in December 2016, Luscher says he learned a valuable lesson about time and money.

"I’m not doing this to pass the time," he says. "I'm not offering a public service. It has to make money."

If you're worried about missing out on The Grape's award-winning burger, worry not: The burger is still available — first-come, first-served — on Sunday and Monday nights.

The Grape, 2808 Greenville Ave. (Lower Greenville)
KEEP THE DALLAS OBSERVER FREE... Since we started the Dallas Observer, it has been defined as the free, independent voice of Dallas, and we'd like to keep it that way. With local media under siege, it's more important than ever for us to rally support behind funding our local journalism. You can help by participating in our "I Support" program, allowing us to keep offering readers access to our incisive coverage of local news, food and culture with no paywalls.
Make a one-time donation today for as little as $1.