The Allen-based game studio BonusXP turned Netflix's wildly popular horror hit Stranger Things into a mobile game. courtesy BonusXP
Netflix's Stranger Things is one of those rare television phenomena that TV executives dream about having on their schedule. Not only is the Duffer brothers' '80s throwback horror story about dimension-bending Demogorgans and the plucky small-town kids who fight them an unexpected hit (almost no one in Hollywood wanted to produce it) but it's also fiercely protected by its fans.

Hardcore fans scrutinize every episode for clues about the strange goings-on in the town of Hawkins, Indiana. They elevate lesser characters to gods, like poor bookish Barb who (spoiler alert!) dies early in the first season but has somehow become one of the show's most beloved characters.

That's a lot of pressure the makers of the official video game, which had to be built on a short timeline so that it would be ready before Netflix made the second season available for streaming today.

"The time we had to work on it was ridiculously small," artist Bobby Frye says. "We had less than a year, and this game is enormous."

That's what the Allen-based game studio BonusXP faced eight and a half months ago with its Stranger Things touchscreen mobile game, which has won critical accolades and become a top download since it was released Oct. 4. Studio employees managed to create a classic video game that pleases both the modern mobile gamer and the old-school controller generation, but they had to meet a short deadline and overcome an office flood that almost wiped out all of their work.

Today, in conjunction with the release of Stranger Things' second season, BonusXP has added a new playable character, Max from season two, and a port for the Amazon Fire, where it will be the first version to offer controller support.

"We knew we had something," BonusXP president Dave Pottinger says. "We knew the game was fun, but it's been pretty awesome to see how instantly beloved it is. It's the first game where it was actually fun to go and read the comments."

Police Chief Hopper stares at the lighted alphabet wall that Will's mom uses to communicate with her missing son.
Screenshot by Danny Gallagher
BonusXP was able to score the lucrative game project with Netflix thanks to a marketing connection who used to work for Microsoft where several members of the BonusXP team also once worked on the PC game franchise Age of Empires. Pottinger says his team at BonusXP loved Stranger Things and wanted to make a game, so he picked up the phone and started making some calls.

Show creators Matt and Ross Duffer "had given an interview a while back that they were interested in getting a video game made, and that helped push the idea forward a little bit," Pottinger says. "We talked about stuff that was simpler, like an arcade game, but when we talked about what we really wanted, Zelda was a perfect match because both are about exploration, and it's kind of a mysterious fit that fit the mood of the show."


BonusXP wanted to make a game that looked like it came straight out of the 1980s. They started experimenting with pixel-based, 8-bit graphics that look like they were made for the Nintendo Entertainment System.

BonusXP wanted to make a game that looked like it came straight out of the 1980s. It started experimenting with pixel-based, 8-bit graphics that look like they were made for the Nintendo Entertainment System. There was a "limited color palette, but we still wanted something from that time period," artist Alfonso Callejas says.

The design team decided to bump up the look to the 16-bit game era; it offered a little more opportunity for detail without straying too far from the game's retro feel. The slightly more advanced pixel design made it easier to create characters that looked like caricatures of the show's central roles.

The show has a wide cast of characters. Some were made playable; others were used as background extras. Barb's fans will be interested to know that BonusXP made a playable version of her character during testing, but it was quickly eliminated — just like her character in the show.

"Telling Mike and Will apart was one of the big challenges," Frye says. "Will is significantly smaller — the sprite, not the actor — but one of his abilities is he can fit through pipes, so it was hard to make that apparent."

The path to save Will isn't a straight line. Players navigate the "real world" in Hawkins and the "Upside Down" and can unlock more playable characters as they figure out where they need to go to advance the story.

"We tried to introduce everything slowly because we knew the old-school feel of the game was going to a mobile audience," says William Lemons, a designer who also wrote the central story of the game. "We didn't want to bog them down with tutorials. We wanted it to appeal to all kinds of players who are nostalgic for those old pixel games, but because it's with Netflix, which has a broad audience, we wanted everyone to enjoy it as well."

The maps of the town are faithful to the show. Callejas says he based his designs on a Google street view map of Jackson, Georgia, where the first season was filmed. He and other members of the team even throw in a couple of Easter eggs, such as the graffitied initials of people who worked on the games. Other Easter eggs offer hints about the new season, such as the movie that's on the marquee of The Hawk theater.

"This was awesome, and I did not find it tiring at all," Callejas says. "The holy grail for OG programmers is to make pixel art because it was a huge part of our childhood." 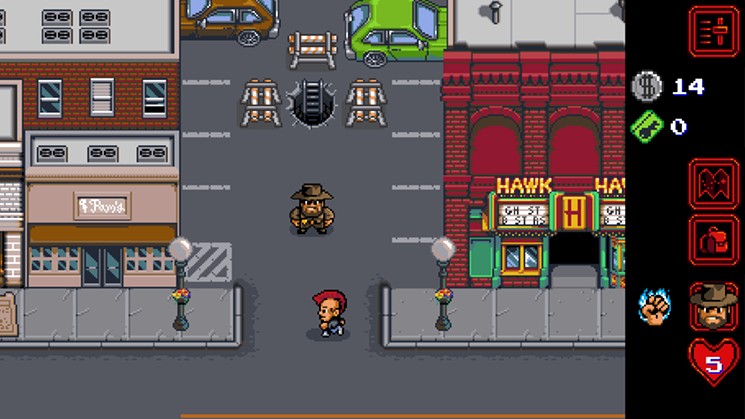 A screenshot shows what downtown Hawkins would look like if Google Maps' street view mode had a pixel filter.
courtesy BonusXP
Lemons was also writing the game's story as he designed the "dungeons," the term for maps that take place in interior spaces. He watched the show repeatedly, paying attention to plot points and references, and also had the Duffers' help to make sure he wasn't straying too far from the show's lore.

"That was exciting to know that the stuff I'm writing was going through that process," Lemons says. "I wanted to make sure the characters sounded like this is what Hopper would say and lines that other people would say."

Another major challenge was testing. BonusXP's 30-plus employees had to keep the game secret, so the usual method of hiring game testers was out of the question. Pottinger says the team used spouses and family members as testers. This process persuaded them to add two difficulty levels to the game: a normal mode and a classic mode for older gamers that's "1984 hard," according to the game.

"The game definitely would have leaked out, so all of our moms and wives and husbands tested it who knew we were working on the game, but they were sworn to secrecy," Pottinger says. "Some people from Netflix also helped test the game as well."

Lemons says it took a lot of strength to resist talking about the game, especially at the height of Stranger Things' popularity.

"There's always that urge like, 'If only you knew what I was doing,' but it was for the good of the project. You have to keep it a secret. There was a big sigh of relief when it finally came out and we could finally talk about it."

When the free game launched on iTunes' mobile app store earlier this month, it had 3 million downloads in the first week. Then an overnight construction accident on the floor above BonusXP's offices funneled 3 feet of water into its studio.

"If it had happened a day sooner, it would have been a disaster," Valesh says.

Pixel artist Bobby Frye tests out the Amazon Fire port of BonusXP's Stranger Things: The Game, the first port that allows players to use a controller with the game.
Danny Gallagher
Thankfully, all of the team's eight and a half months of work had been stored on a cloud network just before the flood. Gameplay wasn't interrupted for any of the users, which include some of the show's stars.

"It's always a little bit nerve-racking putting all this work into it and wondering if they are going to like it," Valesh says. "So once we saw they were downloading it and saw all these articles and all the positive responses, we were like, 'Yea!' I remember seeing a tweet from David Harbor [who plays Hopper] and how he couldn't get past one of the Bruisers in the first dungeon, and it was just really cool to see that he was actually playing it, or at least trying to."