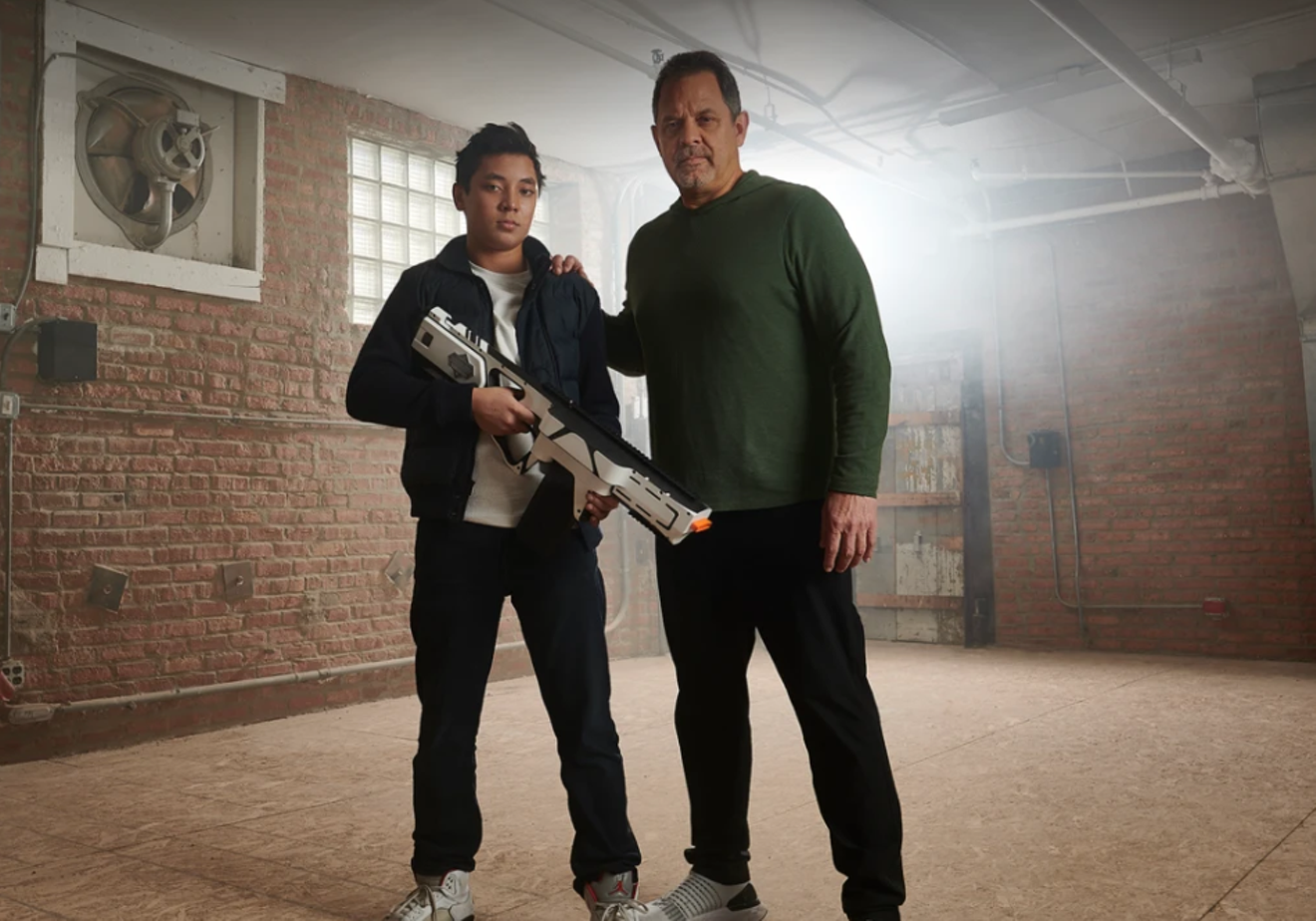 David Pisor, right, and his son Henry, left, invented the Shelby Destroyer, an electronic foam dart rifle that could bring some stiff competition to the toy dart and disc gun marker. Courtesy of H.P. Shelby Manufacturing
Nerf has pretty much been the top dog of the foam dart and disc gun toy market since its inception. Now a local businessman and his son want to challenge the "Nerf or nothing" mantra with a toy that could send Nerf running for cover.

David Pisor, a partner in the hospitality group What If Syndicate behind four-star dining establishments such as The Monarch in The Thompson Hotel and the upcoming sushi restaurant Kessaku, founded another venture with his son Henry with Shelby Manufacturing. The company will release a new foam disc launcher called The Shelby Destroyer, which is in development.

"We started in March of 2020, kind of at the point when COVID hit," Pisor says. "My son and I looked at each other and we've been playing with Nerf for about eight or nine years and we loved the toy. It's a lot of fun. We'd have birthday parties around it. We just thought to ourselves if we could have a blaster that's similar to this but higher in quality."

The two started work on a prototype for a toy weapon that could fire small, aerodynamic discs with greater speed and accuracy using high-quality, rechargeable battery powered parts instead of simple plastic mechanics or electronics that required disposable batteries.

"We've done a great job of creating something with a very long lifespan," Pisor says. "It's got a lithium ion battery that can last three days even if you play with it all day. We got sick of buying D batteries."

Pisor says they jump-started financing with an IndieGoGo campaign to help start the project and gauge the public's interest in the toy. The campaign raised $100,000 in donations from over 280 backers.

The two started commissioning prototypes of the rifle and produced something that can fire 120 foam discs per minute and weighs just under 5 pounds. The most recent model added a carbon fiber cover to the gun, making it light and durable.
click to enlarge 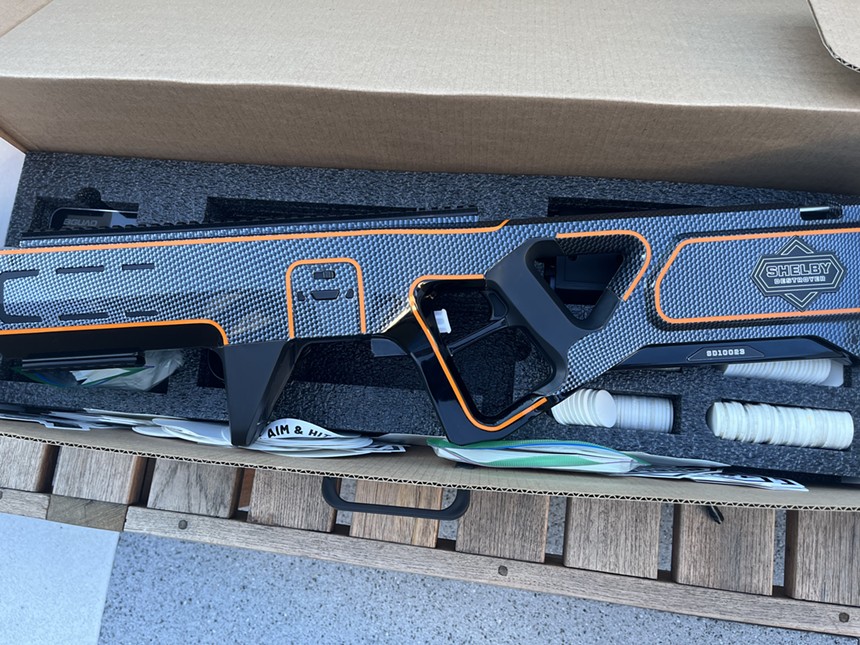 "If you can have 120 rounds, which is the most of any blaster, and one or two magazines on your vest, you can play for a long time," Pisor says. "It's way more fun."

The Shelby Destroyer is also extremely accurate even with its high rate of fire. Pisor says it "can hit the chest of a Wolverine figure at 40 feet."

"We've got one more round of quality control with our drop tests and the plastic we're making," he says. "We're trying to create something that feels like an electric drill."

Demand for the item is high as previews started to appear on website and prominent Nerf review YouTube pages like LordDraconical, who can be seen at the annual Jared's Epic Nerf Blaster battle at AT&T Stadium. Pisor says they've already started developing accessories for the device and a smaller pistol version of the Shelby Destroyer.

"The thing I'm most excited about is working on a vest that can signify if you've been killed," he says. "We'd like to create an arena where we can have battles with a five-on-five team, and if kids don't have the money to buy one, they can come play for $10 an hour or something."

The discs will also be in high demand since they can fly really fast can and easily get lost in large battlefields. Pisor says they're creating discs that are eco-friendly and biodegradable as well as a membership system in which new ammo arrives every three months.

"It's taking the game that's played 90 percent inside and moving it outside," Pisor says.

The thing he's most proud is the business he's built with his son while the latter is still in high school. Pisor says Henry's dedication has been amazing to watch.

"We just sent out these thank you cards and Henry signed each one of them," Pisor says. "This made me feel great because now he gets what it feels like to build something. He really does get it."
KEEP THE DALLAS OBSERVER FREE... Since we started the Dallas Observer, it has been defined as the free, independent voice of Dallas, and we'd like to keep it that way. With local media under siege, it's more important than ever for us to rally support behind funding our local journalism. You can help by participating in our "I Support" program, allowing us to keep offering readers access to our incisive coverage of local news, food and culture with no paywalls.
Make a one-time donation today for as little as $1.