La artista y her work. Wendi Ruth Valladares celebrates her Spanglish upbringing, even in the exhibition's name. Ana Astri-O'Reilly
Nostalgia, family and identity are the forces behind Wendi Ruth Valladares’ work. Her new exhibition, Un Medley de Memorias, running until Oct. 11 at the Oak Cliff Cultural Center, reflects her feelings of loss and nostalgia as well as her bilingual upbringing.

Valladares collaborated with four local Latino artists. She asked them what they remembered most from their childhoods and went from there. These collaborative pieces are called “Valise de Recuerdos” (Suitcases of Memories). Each one is a sort of box or suitcase with images or objects selected by each artist, to which Valladares added her own response. In “Ay, machín!” for example, the image is that of a cool sports car. The word 'machín' describes something that is cool. Valladares' response was to add little objects that she collected as a child and which she thought were awesome back then, like a Matchbox car.

The use of toys and toy imagery reflects a nostalgia for childhood. One of Valladares' favorite pieces is “El Chicano Dice” (The Chicano Says), a take on the classic See ‘N Say Farmer Says, but with Mexican Spanish words instead. It also references the artist's bilingual background and the way children learn a language by playing.

“I love toys. I’m a kid at heart,” Valladares says.

Her artwork is also a celebration of bilingualism. English and Spanish were spoken at her home, as well as the blend of both, Spanglish. She is intrigued by the idea of working with both English and Spanish, and how you can create your own language. Language is identity, and Valladares is fine with the idea that some people will relate to and understand her work, and some won’t.

“I didn’t realize how big Spanglish was," she says. "I didn’t realize I was in it." She adds that we speak the language that we hear growing up, then go outside our bubbles and realize things are different in the outer world. Because Oak Cliff has a significant Hispanic population, Valladares wanted to add more Spanish and Spanglish to her work as a sort of tribute and a way of giving back to the community.

Both the domestic space and the experimentation within it have an important thematic platform in the exhibition. Valladares started to use more colorful backdrops to make use of the walls for the exhibition. Bright, bold colors are energetic and demand the viewer’s attention. The artist designed her own wallpaper, where she references Aztec, Spanish and English culture in the form of Aztecs symbols or Spanish carnations. Her family comes from Mexico, she says, and she wanted to honor her background.


“I put this pattern design together, sort of a tribute to Mexico. There’s always family, faith and food. " – Wendi Ruth Valladares

“I put this pattern design together, sort of a tribute to Mexico,” Valladares says. “There’s always family, faith and food. Everything has been hand drawn, painted and printed.” Her grandmother always told her to remember— and never be ashamed of — where she came from. Her works reflects that pride.

“They got ingrained in my heart and in my mind,” Valladares says of her grandmother's words.

Valladares’ grandparents, whom she says greatly influenced her, passed away while she was in grad school in Kansas. Since she couldn’t be with her family at the time, she started drawing her grandparents to remember all the good moments. However, a professor disparaged Valladares’ work, saying it didn’t mean anything to him.

“That hurt; I didn’t realize I was mourning their loss through my work,” she points out. Since Valladares wasn’t allowed to draw her grandparents, she decided to draw the little things that reminded her of them. These “little things” meshed together to create “bigger things,” into collages.

This idea of a collaging also came from Valladares' grandmother.

“She had the ugliest wall ever,” Valladares exclaims. “(My grandmother) collected pictures and things that meant a lot to her, and put them randomly on the wall, no sense to it, no aesthetic, nothing ... I took that idea.”

Valladares uses screen printing and lithography in her work. The three steps of her process are shown on one of the walls. From left to right, there’s a drawing made by hand on a piece of clear Mylar polyester film. The next step is to print it in one color. Then, she adds other colors during the screen-printing process. There’s an arrangement of pieces on a cobalt blue background that resemble framed paintings. Each image, however, is a lithograph. Valladares printed them on paper and assembled each one to look like a real frame.

When she was a child, her parents wouldn’t let her paint her room. As she didn’t like the color of the walls, one day she cut out flowers and stuck them onto the "ugly walls."

“I look at my work now and I feel I’m a little kid again,” she says with an impish smile. “I’m doing the same thing with space. I’m re-creating it, adding color, creating my own space.” Some things never change. 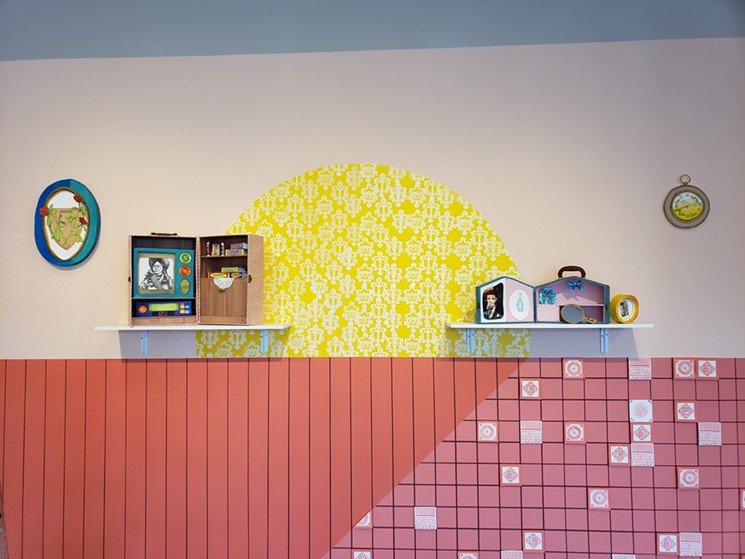 The Oak Cliff Cultural Center's exhibition is a collection of childhood memories.
Ana Astri-O'Reilly
KEEP THE DALLAS OBSERVER FREE... Since we started the Dallas Observer, it has been defined as the free, independent voice of Dallas, and we'd like to keep it that way. With local media under siege, it's more important than ever for us to rally support behind funding our local journalism. You can help by participating in our "I Support" program, allowing us to keep offering readers access to our incisive coverage of local news, food and culture with no paywalls.
Make a one-time donation today for as little as $1.