Hansel and Gretel at the Winspear Opera House
So, you've got the kids and they're still all wired up from the K2-sized mountain of fun-size candy they collected on Halloween. How do you keep them still and entertained? Take them to the Winspear Opera House (2403 Flora St.) for the final week of The Dallas Opera's production of Engelbert Humperdinck's Hansel and Gretel, the classic story of two children who duel with an evil witch in her candy-coated fortress and end up ... well, we don't want to spoil the ending. The show starts at 7:30 p.m. on Wednesday, Nov. 2, and Saturday, Nov. 5. Tickets are $15–$223, but children ages 6–17 get in for just $25, excluding box seats. Tickets can be purchased online at dallasopera.org.

An Evening with Phil Rosenthal of Somebody Feed Phil at the House of Blues
Phil Rosenthal is one of those people who get to travel the world and eat amazing food FOR A LIVING. That's his job. That's what he gets paid a lot of money to do. If you get to do something that most people would lose a vital organ to do, you better have some great stories to go along with it. Rosenthal is one of Hollywood's most successful comedy writers and the executive producer of Everybody Loves Raymond, so he knows how to spin a yarn. He'll be at the House of Blues (2200 N. Lamar St.) at 6:30 p.m. on Thursday, Nov. 3. Tickets are $39.50 and are available online at LiveNation.

Marc Maron at The Majestic Theatre
The comedian and host of the WTF podcast is saying "This May Be the Last Time" with his current comedy tour. Knowing Maron's penchant for carrying the world's anxiety on his shoulders through his comedy, he might not be kidding. So catch him live while you can at The Majestic (1925 Elm St.). The show starts at 8 p.m. (doors open at 7 p.m.) on Thursday, Nov. 3. Tickets are $39–$59 and can be purchased online at Ticketmaster.

Lewis Black, as always, is not hateful but more about loving to stick it to the man.
Clay McBride

Lewis Black at the Majestic Theatre
Comedian Lewis Black is one of those people who will never run out of material because, well...look around. People are confusing facts with wild conspiracies they've read on the Internet. The world feels like it's on the brink of a nuclear war. Dr. Oz may be a senator. So it's no wonder he's called his latest tour the "Off the Rails" tour. Grab a seat and hear Black's latest rants or even share one of your own at The Majestic Theatre (1925 Elm St.) at 8 p.m. on Friday, Nov. 4. Tickets are $39–$85 and can be purchased online at Ticketmaster. Puddles Pity Party and Piff the Magic Dragon at The Majestic Theatre
When a poster or a commercial calls a musical show "magical," it sounds suspicious. It's not like Kenny G is gonna make an elephant disappear or Michael Bolton will risk drowning in an enclosed case for our amusement. This dual performance by the acclaimed cover singer Puddles and the comic illusionist Piff the Magic Dragon can be called magical, because real magic is involved. Catch these two legends of the long face on one night at 8 p.m. Saturday, Nov. 5, at The Majestic, 1925 Elm St.Tickets are $35–$149 and can be purchased online.

Casablanca Brunch at the Alamo Drafthouse
You haven't seen one of the greatest performances of Humphrey Bogart until you've seen him on the big screen. Four Alamo Drafthouse theaters across D/FW will give you the chance with a special Casablanca screening brunch. The screenings start at 1:05 p.m. on Saturday, Nov. 5, at the Las Colinas theatre at 320 W Las Colinas Blvd.; at noon at the Lake Highlands theater at 6770 Abrams Road and 12:45 p.m. at the Denton theater at 3220 Town Center Trail, and on Sunday at 1:05 p.m. at the Cedars location, 1005 Botham Jean Blvd. Tickets are $10 and can be purchased at the box office or online.

The FIFA World Cup Trophy Tour at Lighthouse Artspace
The world worships soccer or "their football," as they might call it. This year's World Cup Trophy isn't just sitting on a shelf or in a warehouse waiting for a team to win it. It's going on tour, and it'll make a two-day stop at Lighthouse Artspace at 507 S. Harwood St. starting on Sunday, Nov. 6. The ticket-purchasing process is a little different for this event. Grab a 20-oz. Coca-Cola product, scan the code through the website us.coca-cola.com/trophytour and get your ticket and a time to see the World Cup Trophy.

Whether you're a yoga master or a beginner, you'll fit right in at the White Rock Hills branch library.
W Dallas

Gentle Floor Yoga at the White Rock Hills Branch Library
Are you one of those people who haven't made up your mind about yoga? Sure, it looks weird trying to hold strange poses in mid-air. Then again, every time your joints move, they make more cracking noises than the elbow of a crazy straw. Whether you're a novice or an experienced yoga student, there's a place for you at this especially gentle floor yoga session. It starts at 11 a.m. on Monday, Nov. 7, at the White Rock Hills Branch Library's auditorium, 9150 Ferguson Road. Attendance is free and open to the public. 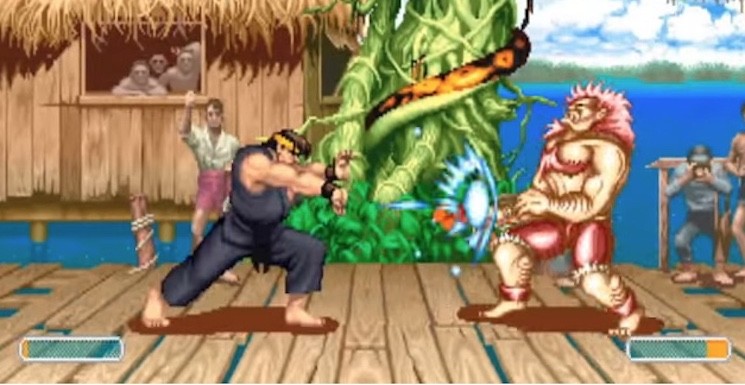 Ryu hits Blanka with a fireball during a bout in the arcade game Super Street Fighter II Turbo.
Capcom screenshot

Tuesday Night Fights at Free Play Richardson
Who doesn't love a good fight? You someone to root for without having to take a single punch. If you're the kind of person who still loves a fight but not all the violence, head over to Free Play Richardson at 1730 E. Belt Line Road for its weekly Tuesday Night Fights tournament. This week's match will pit virtual fighters in rounds of the arcade fighting classic Marvel vs. Capcom 2.

Steve Hofstetter at the Arlington Improv
There are ways to enjoy comedy without having to lower your IQ at the same time. Steve Hofstetter is a master satirist who can take apart even the touchiest issues with the comedic skill of a master surgeon. Catch him live for one night only at the Arlington Improv, 309 Curtis Mathes Way. The show starts at 7:30 p.m. on Tuesday, Nov. 8. Tickets start at $25 and can be purchased at the box office or online.
KEEP THE DALLAS OBSERVER FREE... Since we started the Dallas Observer, it has been defined as the free, independent voice of Dallas, and we'd like to keep it that way. With local media under siege, it's more important than ever for us to rally support behind funding our local journalism. You can help by participating in our "I Support" program, allowing us to keep offering readers access to our incisive coverage of local news, food and culture with no paywalls.
Make a one-time donation today for as little as $1.