The Rocky Horror Show at the Majestic Theatre
Yes, you've seen The Rocky Horror Picture Show more times than your brain can remember. You've even seen The Rocky Horror Show, the live stage musical written by Richard O'Brien. But you haven't really watched it if it wasn't during Halloween. The cold night air and creaky tree branch noises that seem to happen only this time of year make it feel more like an event. The nonprofit musical production company Lyric Stage is giving you the chance to experience the perfect Halloween musical at The Majestic Theatre (located at 1925 Elm St.) with a live production of The Rocky Horror Show, which runs at 7:30 p.m. every night from Wednesday, Oct. 26, through Sunday, Oct. 30. Tickets are available online.

Señor Barber at Ochre House Theater
October isn't just a month for costumes, candy and pretending to like "The Monster Mash," even though you've probably heard it more times than any sane human should. The first part of October is also Hispanic and Latinx Heritage Month, and the Ochre House Theater (825 Exposition Ave.) and the Dallas Flamenco Festival are celebrating the occasion by letting it bleed into the rest of October with a live performance of Señor Barber. It's a story about two brothers who compete for love and fame by making a deal with the devil, and it includes traditional Flamenco music and dances. The show premieres at 8:15 p.m. on Wednesday, Oct. 26, with additional performances at 8:15 p.m. from Thursday, Oct. 27, to Saturday, Oct. 29, and Wednesday, Nov. 2, to Saturday, Nov. 5. The Ochre House Theater will also hold matinee performances at 2:30 p.m. on Saturday, Oct. 29, and Saturday, Nov. 5. Book your tickets online. Heather McKinney (left) and Christie Wallace host Sinisterhood.
Kaspars Skels
Sinisterhood at the Texas Theatre
True crime and comedy sound like they'd be mortal enemies, but they actually go together as well as peanut butter and jelly if the person making the sandwich stabbed at everything but the bread and the jars. The Dallas-based hit podcast Sinisterhood, hosted by Heather McKinney and Christie Wallace, is proof of that. The duo, who like "keeping it creepy," will record a live episode of their podcast at the Texas Theatre, 231 W. Jefferson Blvd., at 8 p.m. on Thursday, Oct. 27. Front row and balcony seats are sold out, but general admission tickets are still available on Prekindle.

Author Robin McLean at Interabang Books
The author of the gripping and nerve-knocking Pity the Beast, which exposes an even darker side of the American West, turns her attention to the rest of America with her short story collection Get ’em, Young, Treat ’em Tough, Tell ’em Nothing. McLean's books deliver the kinds of stories that force you to have an opinion about them by shining a bold and unrelenting spotlight on a truth most of us seldom see. She'll be at Interabang Books, 5600 W. Lovers Lane, with a live reading and Q&A starting at 6 p.m. on Thursday, Oct. 27. Attendance is free and open to the public.

Hansel and Gretel at the Winspear Opera House
Hansel and Gretel is one of those fairy tales that sounds innocent and fit for children, but when you really sit down and read it or watch it, you remember that it's the story that made you scared to walk alone in the woods or to be in the presence of open ovens. Thankfully, The Dallas Opera's rendition of this classic "children's" tale doesn't go all the way to the dark side, so you can bring the kids to the Winspear Opera House, 2403 Flora St. The show premieres at 7:30 p.m. on Thursday, Oct. 28, with additional performances at 2 p.m. on Saturday, Oct. 30, and 7:30 pm on Wednesday, Nov. 2, and Saturday, Nov. 5. Tickets range from $15 to $255 depending on show time and available seating. Children ages 6–17 can get a ticket for $25, excluding box seats. Tickets are available online at DallasOpera.org. 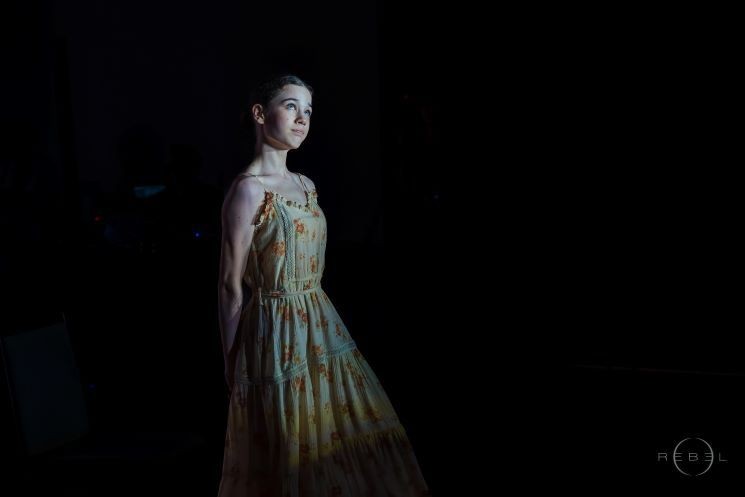 Singer, dancer and actress Baylie Carton is one of the future stars you'll see at Rebel Industries Showcase at the Winspear Opera House.
Lucas Atkins
Rebel Industry Showcase at Winspear Opera House
The true artistic talents of the future usually don't make appearances on fake reality shows that pretend to encourage musical expression. They're made on stages in front of live audience members who aren't sprawled on their couches at the end of a long workday. See some true young talent at the Rebel Theatrics' Industry Showcase, with two shows at 1 and 6 p.m. on Friday, Oct. 29, at Hamon Hall in the Winspear Opera House, 2403 Flora St. Tickets are $14.25 and can be purchased online.

Paddington Gets in a Jam at the Eisemann Center
The world's most iconic and loveable teddy bear who doesn't speak with a Boston accent and get high with Mark Wahlberg literally gets in a jam in this live stage show. Paddington tries to make a batch of his favorite marmalade jam, and a charming, hilarious story of slapstick accidents ensues. Paddington Gets in a Jam premieres at 11 a.m. and follows with an additional performance at 2 p.m. on Saturday, Oct. 29, at the Charles W. Eisemann Center, 2351 Performance Drive in Richardson. Tickets are $39–$45 and can be purchased online.

Dallas Mud Run at True Grit Ranch
Who says you have to spend the autumn hiding in your house avoiding the cold air like a scared bunny rabbit? Go out and get dirty. The Touch Mudder obstacle course challenges participants to run through one of three grueling courses holding an ungodly amount of sticky, muddy sludge. See if you've got what it takes to drag your sorry hump across the finish line starting at 10 a..m on Saturday, Oct. 29, and 9 a.m. on Sunday, Oct. 30, at the True Grit Ranch, 6810 Old Grandbury Road in Granbury. Tickets run from $99 to $139, depending on the length of the course. Kids can participate in a special "Adventure Inspired" course for $25. Tickets are available online at ToughMudder.com. 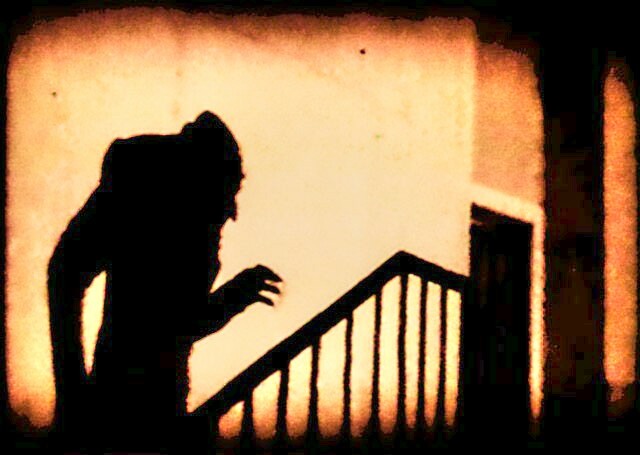 The shadow of the evil Count Orlock, played by Max Schreck, ascends a staircase in the 1922 silent film classic Nosferatu: A Symphony of Horror.
Wikimedia Commons
Nosferatu: A Symphony of Horror with live score by The Invincible Czars at Texas Theatre
You could spend Halloween pretending you're not sick to your stomach eating your weight in "fun size" candy or walking through a "haunted house" where you pay to have masked teenagers scream at you in the dark. Wouldn't you rather spend Halloween with a true piece of horror? The Texas Theatre, 231 W. Jefferson Blvd. in Oak Cliff, will let you do just that this Halloween with a screening of the 1922 German silent film Nosferatu: A Symphony of Horror, directed by F.W. Murnau. The screening will be accompanied by a live performance of the film's original score by the cinematic rock collective The Invincible Czars. It starts at 8 p.m. on Sunday, Oct. 30. General admission tickets are $18. Balcony seats are available for $29. VIP tickets, which come with early entry and a screen-printed poster, are also available for $35 and can be purchased on Prekindle.

The E.T. The Extra-Terrestrial Brunch at Alamo Drafthouse
Why does every other movie alien have to be some snarling, slimy beast with saliva that can burn through an iron girder? There are friendly aliens out there who don't want to take over our planet or gobble up humans whole. Take, for instance, the loveable, long-fingered alien from Steven Spielberg's 1982 adventure classic E.T.: The Extra-Terrestrial. Admit it. You cried when you first saw it. Introduce it to someone who's never seen this tearjerker in the theater by going to the Alamo Drafthouse's E.T. Brunch starting at 12 p.m. on Saturday, Oct. 30, at the Cedars theater at 1005 Botham Jean Blvd., the Lake Highlands theater at 6770 Abrams Road or the Denton theater at 3220 Town Center Trail. Tickets are $10 per person and can be purchased at each location or online.

Somehow, this year's WrestleMania at AT&T Stadium was less violent than the Oscars. Get your wrestling fix this week in Dallas.
Courtesy of WWE
WWE Monday Night Raw at American Airlines Center
The TV wrestling institution Monday Night Raw returns to the American Airlines Center at 2500 Victory Ave. for a special Halloween showdown of slaps, slams and slugs for your viewing pleasure. This episode of Monday Night Raw will showcase the talents of Roman Reigns and Brock Lesnar, along with a three-way battle between Matt Riddle, Seth Freakin Rollins and Bobby Lashley. The slams start at 6:30 p.m. on Monday, Oct. 31, and tickets are $26–$206. Go to Ticketmaster to get your seats to this epic ringside rumble.

John Carpenter's Halloween at Studio Movie Grill
OK, it's a little too on the nose. Watching Halloween on Halloween is like eating birthday cake on your birthday or turkey on Thanksgiving. It's not an original idea, and you've done it for as long as you can remember being alive. However, director John Carpenter's slasher flick is a Halloween classic for reasons that go far beyond its title. If you dare to ask why, just go see it for yourself at a local Studio Movie Grill theater at 7:45 p.m. on (wait for it) Monday, Oct. 31, and try to get some sleep that night. Don't say we didn't warn you. Tickets are $10.50 and $9.50 for seniors age 65 and older with a valid ID. Tickets can be purchased online or at the box office.

The Meyerson will have a special performance honoring Día de los Muertos.
Courtesy of Dallas Symphony Orchestra
Día de los Muertos at Meyerson Symphony Center
The Day of the Dead doesn't refer just to the third entry of George A. Romero's Living Dead trilogy, which uses shuffling corpses hungry for human flesh to show the flaws in the bloated military industrial system. It's also a Mexican tradition known as Día de los Muertos, held every Nov. 1 to remember lost loved ones. The Dallas Symphony honors this traditional day with a special concert every year at the Morton H. Meyerson Symphony Center, 2301 Flora St. The festivities start at 7:30 p.m. on Tuesday, Nov. 1. Tickets are $10–$53, depending on availability and seat locations, and can be purchased at the box office or online.

My Fair Lady at Music Hall at Fair Park
The touring company of the classic musical written by Alan Jay Lerner and arranged by Frederick Loewe will be in town for one night only. Catch My Fair Lady at the Music Hall at Fair Park (909 First Ave.) starting at 7:30 p..m on Tuesday, Nov. 1. Tickets are between $30 and $140 and can be purchased at Ticketmaster.
KEEP THE DALLAS OBSERVER FREE... Since we started the Dallas Observer, it has been defined as the free, independent voice of Dallas, and we'd like to keep it that way. With local media under siege, it's more important than ever for us to rally support behind funding our local journalism. You can help by participating in our "I Support" program, allowing us to keep offering readers access to our incisive coverage of local news, food and culture with no paywalls.
Make a one-time donation today for as little as $1.