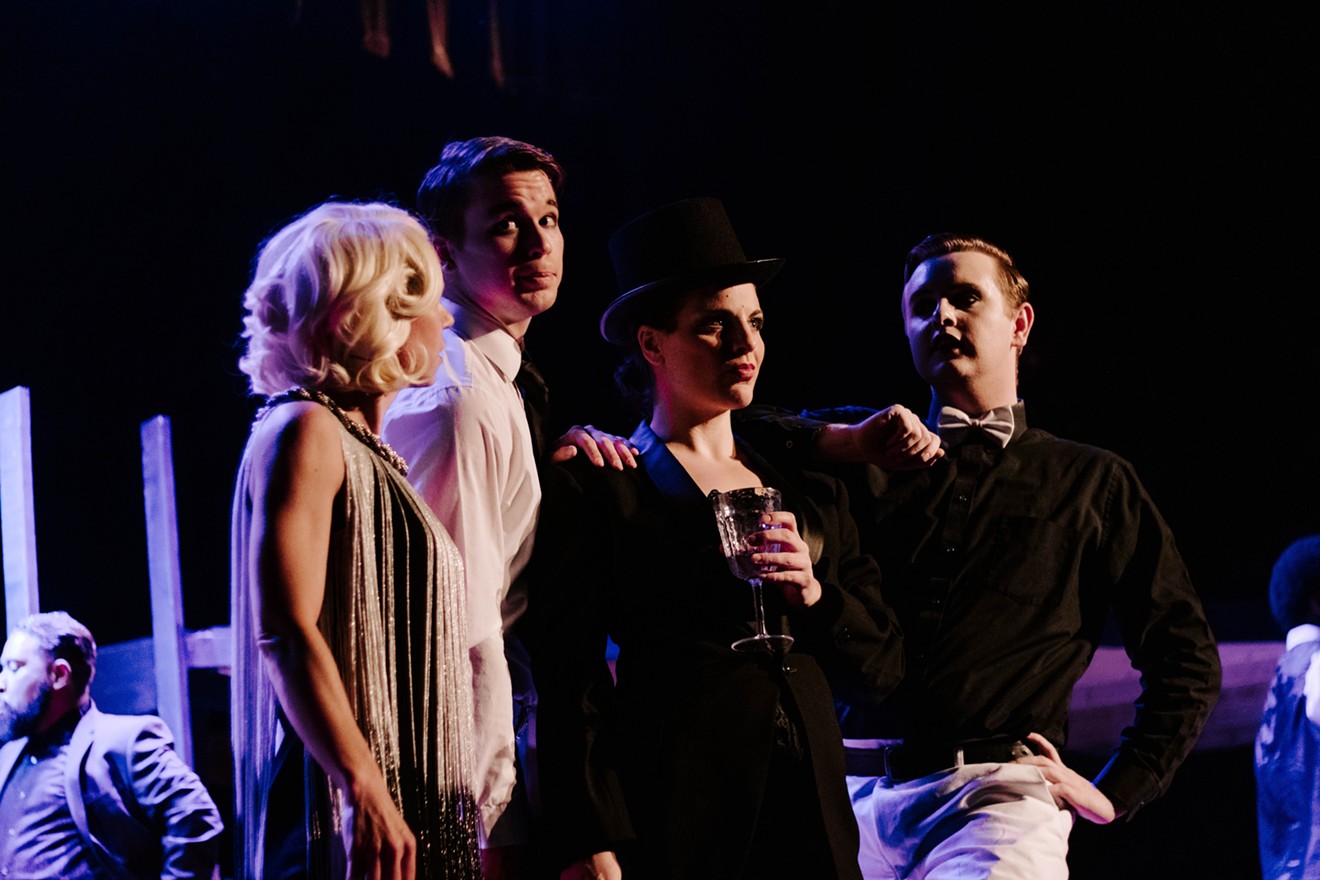 The Wild Party takes all the romance out of the Jazz Era. Andres Tagliaferro

The flamboyance and glamour of the 1920s make for an excellent canvas upon which to paint the emptiest side of humanity. Self-obsessed, alcoholic, drug-addicted, highly sexed and violent, the many characters of Andrew Lippa’s The Wild Party exhibit the oft-romanticized hedonism of the Jazz Era. But while we are happy to watch them onstage, they don’t inspire us to be guests at their party. This is a good thing.

This jazzy piece of musical theater focuses on the relationship between two sexually hungry characters. Burrs (Nolan Spinks) is a vaudeville clown who we first see pulling a never-ending handkerchief, not out of his pocket, but straight out of his pants; and Queenie (Kristin Colaneri), who — as both her vivid wig and the musical’s first song tell us — “was a blonde.” This song shows us how the two lovers meet; the next couple of tunes take us through three years of a relationship that turns verbally and physically abusive.

This is the prologue to the main attraction: Queenie, tired and frustrated by Burrs’ abuse, plots a massive party at which she plans to deeply embarrass the clown. How else is a woman supposed to get back at an abusive lover?

Although Burrs’ actions make the audience writhe, Queenie’s wily acts of retribution cost her any sympathy we may have had for her. She exhibits enough self-determination and sass that we know she can stand up for herself against Burrs and get out of a bad situation. That only makes it worse when she instead vengefully throws herself deeper into their dog-eat-dog relationship.

Even at this early point in the show, nobody in the audience likes Queenie and Burrs. And nor should we: They are perhaps anti-role models, people we despise so much that we would do anything not to be like them.

We would hope, then, that we could turn to some of the other characters for hope. Surely, somewhere among the wild party’s guests, there is a character who is good? But no. The company of partygoers include a pair of performers who are definitely lovers and maybe brothers; a proud whore; a prouder lesbian; a loving but totally vapid couple; and, most horrifically, an innocent minor whose innocence slowly drips away throughout the party. No wonder this show is restricted to mature audiences.

Many of these characters wouldn’t draw a second glance in today’s society, but in the ’20s, they represented the corrupt of society. We would like to disagree with the social ideals of the 1920s, but with this cast of characters, it’s rather impossible.


Nobody in the audience likes Queenie and Burr. And nor should we: They are perhaps anti-role models, people we despise so much that we would do anything not to be like them.

A possible reason none of these characters show even a glimmer of goodness is that they simply don’t get enough time onstage. There are so many characters, and each of them contributes a little something to the diverse picture the show paints of just how many ways there are to be a bad person. And because there are so many of them, none of the characters develop beyond their vices.

That being said, many of the actors seize their short time in the spotlight to show off impressive acting or a great voice. Ashley Ragsdale’s performance as coked-up Kate, who spends much of the play sloppily seducing Burrs, is surprisingly stirring. The character is devoted to being the “Life of the Party,” an empty dream that she expresses in an upbeat song nonetheless underlain with the desperation and hopelessness of a life spent partying. It takes a certain something to express, primarily, the happy lust of a partygoer, while still layering the performance with the torment of a life dissatisfied on different levels. Ragsdale does just this.

Another character, played by Jason Hallman, has scarcely a role in the plot, and has no lines (when he’s introduced, it’s said that his tongue was cut out) — but there is a moment, late in the party as most everyone has fallen asleep, when he dances across the stage wearing nothing but a white shirt glowing in the blue stage lights. His drunken, sightly stumbling (purposefully so, it seems) ballet catches the audience off guard: Perhaps there’s something endearing about humanity after all. It is but a quick glimpse at beauty, but an important one.

But why would we want to watch a musical that represents humanity so hopelessly? Why would anybody want to create a piece of theater so sadistic? Maybe Bishop Arts Theatre Center wants to instill their audience with sadness and despair. But given BATC’s general mission to lift up the downtrodden rather than push them down further, this work likely means something more. Under the direction of Adam Adolfo, who is also the director of marketing and community engagement at BATC, The Wild Party serves to show a very real aspect of humanity — an aspect of humanity that we should want to help.

And BATC offers plenty of opportunities to turn that charitable desire into a reality. They host short conversations after the shows with nonprofits or charities around the area that can both help us realize the reality of what the musical expresses and show us how to help people afflicted in similar ways.

Catch The Wild Party’s final weekend onstage Friday-Sunday, Oct. 25-27, and immerse yourself in a glamorous, terrible world of sex, drugs and jazz — which also serves as a healthy reminder that you can help fix the real problems you see onstage.
KEEP THE DALLAS OBSERVER FREE... Since we started the Dallas Observer, it has been defined as the free, independent voice of Dallas, and we'd like to keep it that way. With local media under siege, it's more important than ever for us to rally support behind funding our local journalism. You can help by participating in our "I Support" program, allowing us to keep offering readers access to our incisive coverage of local news, food and culture with no paywalls.
Make a one-time donation today for as little as $1.